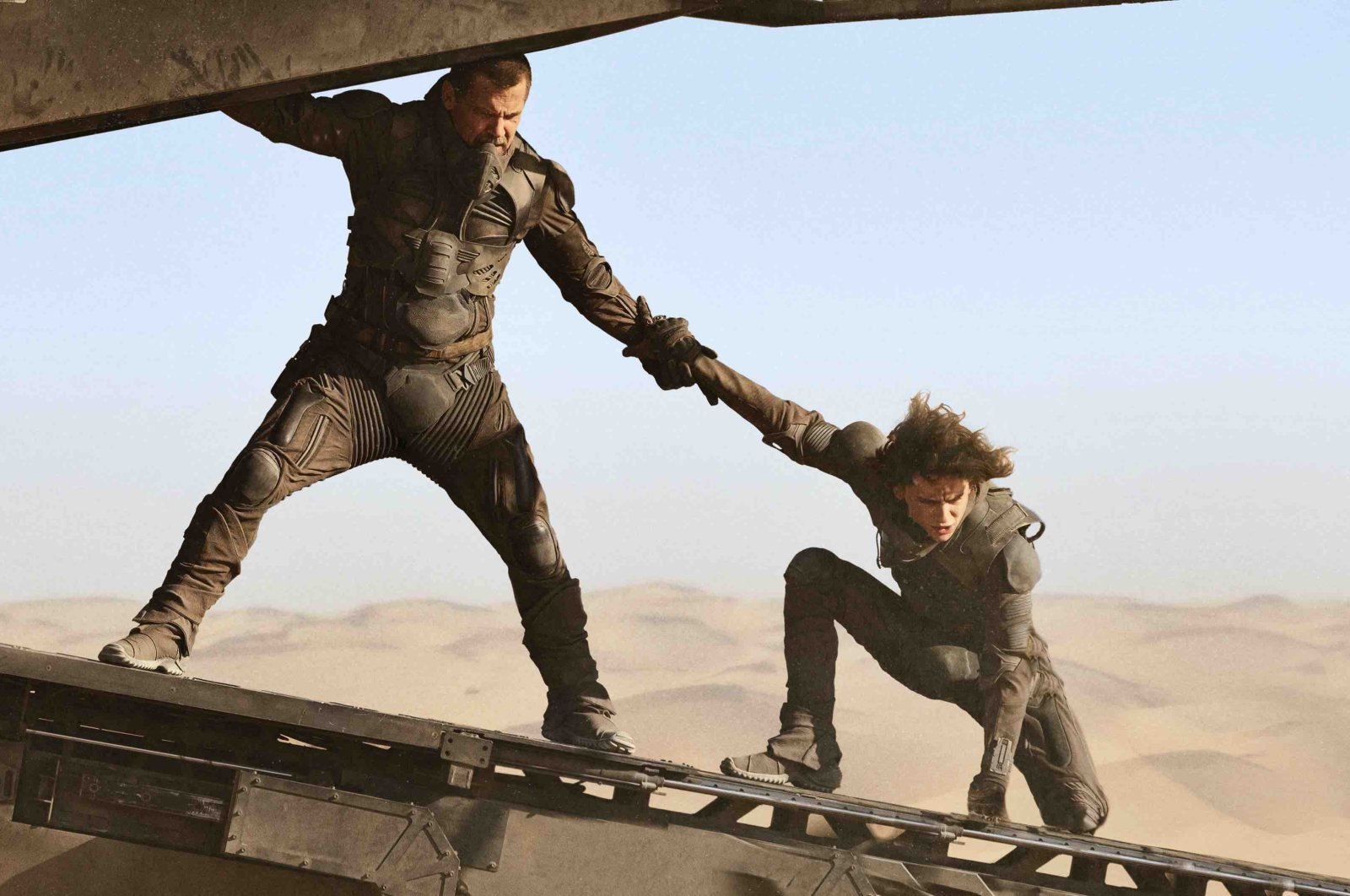 Once credited as defining the real-time strategy genre, video games based on Frank Herbert’s 'Dune' universe have almost been forgotten for two decades. But it could all change with Denis Villeneuve’s new adaptation

The internet is abuzz these days with expectations building up for the latest attempt in adapting Frank Herbert’s "Dune" universe to the silver screen.

The "Dune" remake, helmed by Canadian director Denis Villenevue, was supposed to hit theaters late last year but the coronavirus pandemic caused the movie to be postponed by at least a year, nevertheless, even a viral outbreak has failed to dent the hype surrounding the reboot.

Its first book published in 1965, Herbert’s "Dune" saga tells a story set in the distant future where humankind has become a space-faring civilization. The saga mainly focuses on a desert planet called Arrakis, the only place where a fictional drug called melange, or “the spice,” can be cultivated.

What makes this “spice” so extraordinary? Well, according to the "Dune" saga, melange extends the life of its users and enhances mental capabilities. So, as one can imagine, the control of melange supplies acts as a catalyst for all the politics and drama throughout the series.

So precious are the “spices” that the planet itself is also actively trying to protect it from the grabby hands of humankind, with giant sandworms – which have become iconic creatures in science fiction circles – guarding melange sources.

The saga was first adapted to the silver screen in 1984 by none other than legendary director David Lynch himself. It was one of Lynch’s earlier works and more than a decade before he would become known as that director who liked to mess with his audience’s heads with highly acclaimed yet hard-to-follow movies like "Mullholland Drive" and "Lost Highway."

The 1984 adaptation was far from well-received. It was a box office disaster and critics at the time, including Roger Ebert himself, bashed it to oblivion, calling it one of the worst movies of the year.

For the next 15 years, no Hollywood executive was willing to touch Herbert’s saga. In 2000, mainstream interest in "Dune" was revived after it was adapted to a miniseries for television.

While the miniseries was praised for faithfulness to the original source and was consequently followed by a sequel, it would take two more decades for fans of the silver screen to see another take on "Dune."

Development for the Dune remake began in 2016 when Legendary Pictures acquired the film and television rights for Herbert's universe. Soon rumors began circulating that the movie will be helmed by Villeneuve.

Villeneuve was confirmed next year after he wrapped up two movies he was directing at the time – "Arrival" and "Bladerunner 2049." As soon as he began working on the movie, he voiced his desire to adapt the first 1965 novel into a two-part movie series, which was accepted by Warner Bros. Pictures.

As production of the $165 million adaptation continued, Warner Bros. announced in 2019 that the movie would be released in theaters on Nov. 20, 2020. Featuring an ensemble cast, including Oscar Isaac, Josh Brolin and Stellan Skarsgard, the hype was real.

But then the coronavirus pandemic happened.

As the release date of the movie approached, the pandemic was far from over and audiences filling theaters were a far-fetched luxury at a time when most countries were reporting deaths by the thousands.

In October, Warner Bros. announced that the movie’s release was postponed to Oct. 1, 2021, hoping that freshly approved vaccines would return life to normal by then.

And just two months after the postponement, the studio in a controversial move announced its 2021 film slate, including "Dune," would debut on HBO Max's streaming service simultaneously in the U.S.

While the move was applauded by audiences feeling uneasy about going anywhere near a cinema in the foreseeable future, it was bashed by the industry’s leading figures, including Christopher Nolan and Villeneuve himself. The Canadian director said his adaptation was made with the aim of offering a unique cinematic experience to audiences, adding that the scope of "Dune" was not suitable for television.

While Hollywood figures and movie buffs wonder what the movie will be like when it eventually releases one way or another, a different group of enthusiasts has an entirely different horse in the race.

You see, "Dune" might not have found success on the silver screen, but the sci-fi saga has always been a household name in video game circles. Credited as defining the real-time strategy genre, video game adaptations of "Dune" were considered some of the best of their times.

Developed by Cryo Interactive and published by Virgin Games, the first Dune video game was released in 1992. An adventure game released for DOS and Amiga systems, it drew heavily from Lynch’s 1984 movie for art direction, including footage straight from the film.

While the first game was both a critical and commercial success, it wouldn’t be able to hold a candle to what would come next a few months later.

Less than a year after Dune was released, gamers were offered a sequel, aptly named Dune II.

The game was a departure in genre compared to its successor, becoming a strategy game that allowed players to take control of three houses – Atreides, the Harkonnen or the Ordos – and wage war for the control of Arrakis, and melange.

For the first time in video games, players were able to select a mission they wanted to play on the map instead of following a predetermined path. The game also allowed players to gather resources on the map and fund the construction of their base and armies, which they pitted against enemy forces in real-time to gain control of the region.

Up to that point, many strategy games were turn based, where players would make their move and wait for their opponent’s response.

Three years later, Westwood took what they had learned during the development of Dune II and further improved the real-time strategy genre in a game called Command and Conquer.

The new game was an instant hit with gamers and critics, selling a million copies within a year. For the next decades, Command and Conquer would become a franchise that would spawn dozens of games, including another blockbuster, Red Alert.

After finding massive success with its Command and Conquer series, Westwood went back to revisit Dune for another shot at Herbert’s universe.

Westwood introduced new mechanics to the remake, things that they had perfected while making Command and Conquer games. But while the new changes were welcome, the game was ultimately overshadowed by the company’s own success. Many found Dune 2000 to be an inferior strategy game compared to Command and Conquer and Red Alert.

Diverting its focus back to its golden egg-laying goose, Westwood continued to churn out games for the Command and Conquer franchise.

The studio tried its hand at the Dune series one last time in 2001, releasing yet another real-time strategy titled Emperor: Battle for Dune, but the game received a lukewarm reception at best and was soon forgotten.

Around the same year, Cryo Interactive, the developer of the original Dune game, released its second attempt at the franchise, another adventure game called Frank Herbert's Dune. But the game was both a critical and commercial failure, causing Cryo Interactive to go bankrupt shortly after its release.

That was the last time any video game developer tried adapting Herbert’s saga, and gamers wouldn’t see any new Dune games for the next two decades.

In 2019, 18 years after the last Dune game, a Norwegian developer named Funcom signed a deal with Legendary Pictures to develop a video game related to Villeneuve’s adaptation.

A well-known brand among gamers, Funcom first rose to popularity around the start of the millennium after releasing The Longest Journey in 1999. Considered one of the best adventure games of all time, The Longest Journey spawned a sequel and a spin-off in the following years, but neither came close to the success of the first game.

But before delving into sequels for its first successful game, Funcom took a huge gamble in 2001 in the form of a massively multiplayer online roleplaying game (MMORPG) named Anarchy Online.

It was 2001, and internet usage was not even remotely close to what is today. Many people were still connecting to the internet via dial-up modems, paying for the privilege by the hour.

The technology for MMORPGs was also in its infancy. The computers that hosted servers for the MMORPGs were barely capable enough to accommodate tens of thousands of players playing and interacting in a shared world. To recoup massive server costs, the games would require a monthly subscription on top of the initial purchase price — a concept most gamers were still foreign to back then.

Anarchy Online was released after two other games, Ultima Online and Everquest proved the concept would work, but it was still before the behemoth World of Warcraft took over the genre and increased its appeal massively.

But somehow, Funcom made it work. Anarchy Online is still up and running today, even if it’s a shadow of its former self, while many other MMORPG games that came before and way after it have since shut down their servers.

After Anarchy Online, Funcom tried to emulate its success with MMORPGs again, with another game called Age of Conan, based on Robert E. Howard's "Conan the Barbarian" world, but it proved futile, as the game struggled to attract players.

Nowadays, Funcom is busy with its latest game, Conan Exiles. Released in 2018, the game is also set in Howard’s Conan universe, but instead of an MMORPG, it’s a survival game, where players create their own bases and try to survive against a hostile world and other players.

Shortly after striking a deal with Legendary Pictures, Funcom in 2019 said the next Dune game was “a few years away” from release and offered clear insight about what it would be about.

According to the Norwegian developer, the next Dune game will be similar to Conan Exiles, which means it will be an open-world survival.

Oh, and it will also be a “games as a service (GaaS),” a much-criticized game model where developers prioritize continued revenue with the release of paid updates called downloadable content (DLC). While the model benefits both developers and gamers in theory, it led to many game-makers in recent years to release half-baked games and try to sell features that should have been in the game as extra content.

So that means gamers will be required to open their wallets large and wide if they are to enjoy the next Dune's full potential.