Afghanistan: Before Taliban, after Taliban 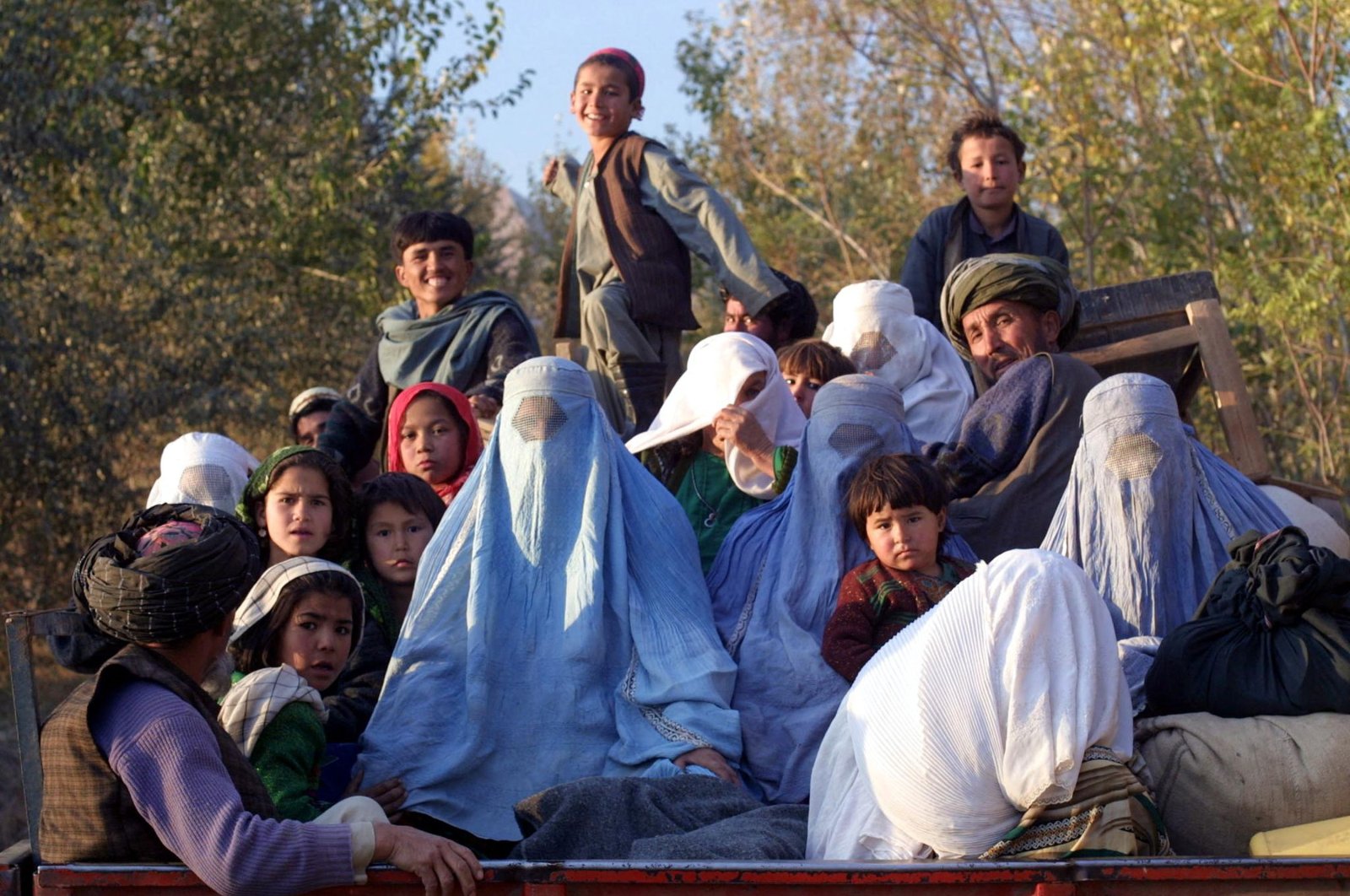 The Soviets staged a coup in Afghanistan and occupied the country to protect the puppet government, which later asked for help. Since that day, poor people in the country have struggled with increasing troubles

Afghanistan is the country with the highest number of citizens living abroad as refugees globally in the last 30 years. Around 3 million refugees live in Iran and 2 million live in Pakistan. Since 1982, Turkey has also hosted hundreds of thousands of Afghan refugees.

Afghanistan has been under Muslim rule since the seventh century. The famed scientific and cultural centers of Ghazni, Herat and Belh are located there. Herat, the capital of Timur's grandchildren in the 16th century, was the first city in the world to boast a population exceeding 1 million. The tomb of Babur Shah, who established an empire in India, is in Kabul as well.

When the Mughal Empire weakened, the Iranians invaded Afghanistan. When Iranian Shah Nadir was killed in 1747, Afghan noble Ahmad Shah Durrani established a national Afghan state. The British occupied the Khyber Pass in 1878. Afghanistan then became a buffer between the Russian and British empires. Thus, Britain and Russia, and later the U.S. and China, are responsible for the Afghanistan quagmire.

by a Tajik adventurer called Beççe-i Saka (Son of the Waterman) in 1929. The king fled to Europe. Declaring himself king, Beççe-i Saka was overthrown within a few months by the former king's foreign minister, Nadir Khan. Nadir Khan established an administration based on Sharia principles. He formed a strong army. His hometown was under construction. However, in Afghanistan the throne is slippery. He was soon killed by a relative for a personal reason.

He was succeeded by his son Zahir Shah. The Afghan-inhabited part (Peshawar), once broken off by the British, caused a border conflict with Pakistan, which was established in 1947. Crucial events such as the British support for Pakistan, Afghanistan’s exclusion from the Central Treaty Organisation (CENTO), Pakistani leader Muhammad Ali Jinnah's refusal to respect the autonomy of the Afghan region, and finally Pakistan's aerial bombing of Afghan residential areas pushed Afghanistan to Russia’s side. Political, cultural, and economic agreements were signed.

Realizing his mistake, Afghanistan’s former President Mohammed Daoud Khan arrested the communists in the country in 1979, causing Marxist officers to stage a coup. Daoud Khan was murdered with his entire family and Nur Muhammad Taraki became president. When the communists began to settle on the corners, the people revolted. Taraki was overthrown and was succeeded by his friend Hafizullah Amin. The Soviets, angered by the unauthorized coup, replaced Amin with Babrak Karmal. Karmal also asked the Soviets for help against the rebellious people, a Soviet tactic that prevailed everywhere at all times. The Russians invaded Afghanistan.

On the other hand, the Western bloc armed the people and organized the resistance rather than directly intervening like in Korea and Vietnam. Thus, the wars between the mujahideen and the Soviets, which lasted for years and devastated the country and its people, began. In 1986 Karmal fell and the Russians withdrew in 1989. This defeat is also one of the biggest factors in the disintegration of the Soviet Union.

This time, a civil war broke out in the name of power between the mujahideen sects in the country. When a disagreement broke out between the moderate leader Burhanuddin Rabbani and the extremist prime minister Gulbuddin Hekmatyar, the U.S., who did not know the Middle East well and always kept a distance from the monarchy, got involved in a dangerous game instead of putting Mohammed Zahir Shah back to power and ensuring stability.

Early in the 1900s, many Afghan youths studied in Deobandi madrassas, which had been operating in India for a long time. Although these madrassas were established with a Sunni background, they later degenerated and started to operate in a wide religious range extending to Wahhabism. The political stance of Deobandi was radical, as it was one of the places in India where resistance to the British was burgeoning.

One of the madrassas' members, Ubeydullah Sindi, came to Afghanistan in 1914 and tried to organize a resistance movement with the help of the Young Turks and Germany. He even collaborated with Young Turk officers fleeing Istanbul. When the war was lost, the operation ended. Sindi returned to India in 1920.

Who are the Taliban?

Now, it was the Deobandi's job again. Thousands of orphaned Afghan youth were sent to Afghanistan in a short time with the support of Pakistan and the U.S. by using the few Deobandi madrassas located close to the Afghanistan border. Beforehand, these students were given military training with little religious education. The Taliban means "students."

The Saudis had been operating in Pakistan for a long time. Their influence permeates communities and impacts leaders mostly through material power. In fact, the Taliban, rather than following the classical Sunni line in attitude, adheres to the strict Salafi line that respects the outward signs of verses and hadiths. The political stance of Sunnism is traditionally cautious.

The Taliban declared their mission to be to liquidate the warlords that emerged after the Soviet invasion and to establish a religious administration. The movement, which started with just 50 students in 1994, reached 20,000 members in a short time. They took action with the material support of Pakistani intelligence (and therefore China) behind them and seized the administration of the country in 1996. Their leader, Mullah Mohammed Omar from Kandahar, was declared the "amir al mumineen” (Commander of the Faithful).

The first Taliban government was recognized by Pakistan, Saudi Arabia and the United Arab Emirates (UAE). The Taliban fought fiercely with those who resisted. They assassinated mujahideen leaders, including Burhanuddin Rabbani and Ahmed Shah Massoud. The first president, Sibghatullah Mojaddedi, survived an assassination attempt. Some, like Hekmatyar, joined the Taliban. Thousands of soldiers and civilians died.

As the famous Afghan novelist Khaled Hosseini describes in "The Kite Runner" the religious and the nonreligious used to live in moderate peace and Islamic legal system operated in Afghanistan. However under the Taliban rule, as is the case in Ayatollah Khomeini's Iran, an ostensible veil of piety was drawn over the country. The images of executions (some likely to be fiction) and obliging men with beards and women with veils, although it is not a command (wajib) of religion serve to fuel Islamophobia in the world.

America became hostile to the Taliban on the grounds that they embraced al-Qaida, whom the U.S. held responsible for 9/11, and protected Osama bin Laden. It invaded Afghanistan in 2001. A democratic-looking government was formed under the leadership of Pashtun politician Hamid Karzai, whose father was killed by the Taliban. The central government, though officially recognized by the world, only had the strength to control as far as the suburbs of Kabul, boosting the comparative power of the Taliban.

The Taliban, which could not compete with the U.S. and its allies on any level, attacked again in 2004 and somehow suppressed its enemy with guerrilla warfare. In 2019, an agreement was made for the U.S. to withdraw from Afghanistan within 14 months in return for the Taliban's promise not to host dissidents. The fall of Kabul was reminiscent of the evacuation of Saigon in 1975, although America did not quite accept it. With the withdrawal of the Allied troops, Afghanistan came under the control of Pakistan and therefore China. Now, the phrase "before the Taliban – after the Taliban" is used when describing Afghanistan.