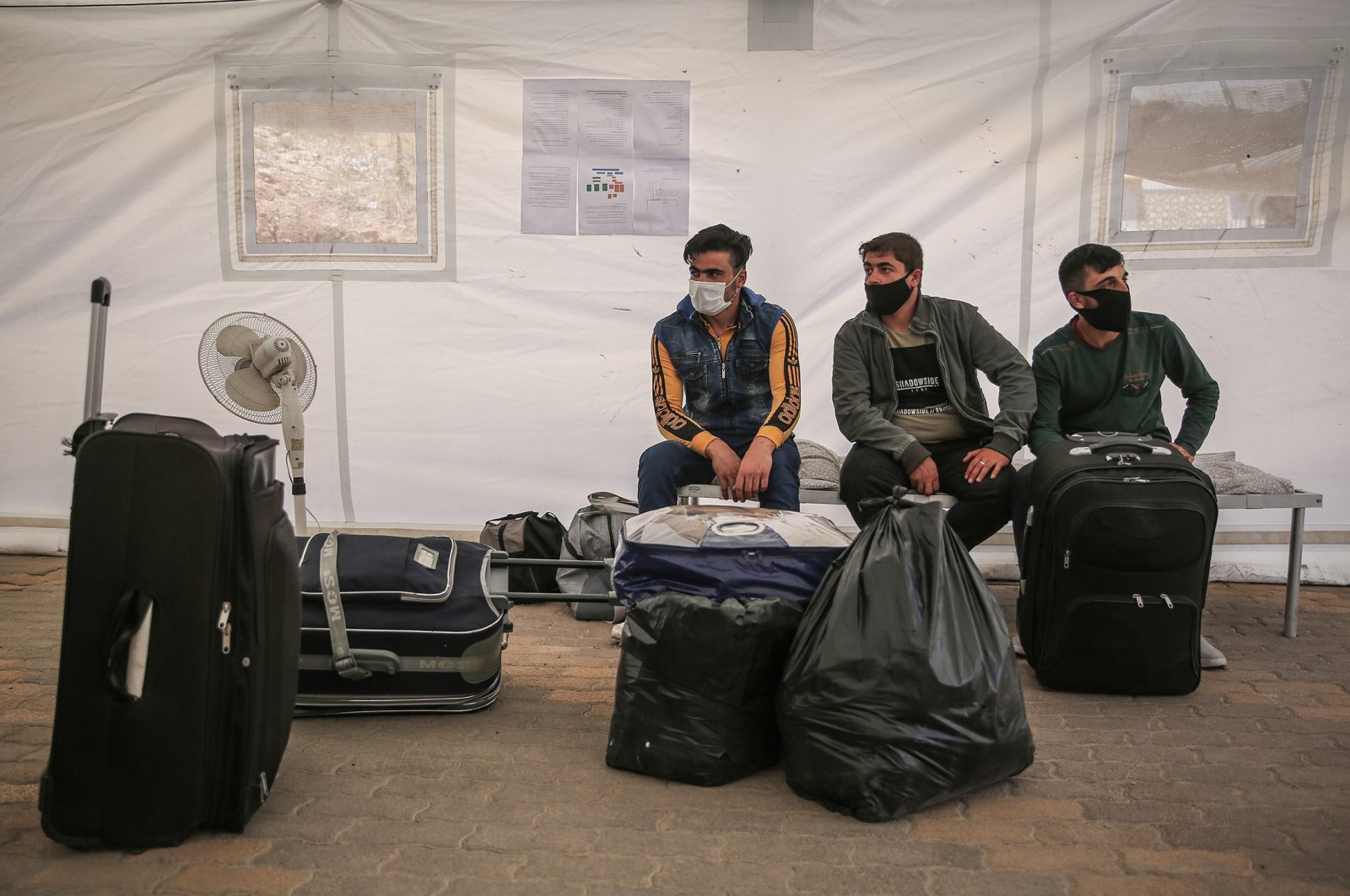 Syrians wearing face masks wait inside a mobile clinic at the Bab al-Hawa border crossing with Turkey, in Idlib, Syria, July 22, 2020. (Photo by Getty Images)
by Burhanettin Duran
Aug 02, 2021 12:05 am

Let’s bust the myths. I am talking about the ideologically charged myths surrounding the question of asylum-seekers.

Turkey cannot address a problem like irregular migration, which originates in its neighborhood, with a racist or populist approach.

To develop a rational, long-term and comprehensive policy, we need to decouple the migration debate from ideological myths.

The first misconception that comes to mind is that the Syrian refugees will simply return home if Turkey reaches an agreement with Bashar Assad’s regime.

Fortunately, the general population already knows that this is impossible.

The Syrians won’t return unless and until the Syrian opposition has a secure place within the new equilibrium in their native country.

If anything, failure to preserve the Turkish presence in Idlib, not to mention the safe zones, will certainly result in a fresh influx of asylum-seekers.

The second myth is that the Turkish government seeks to reshape the country’s demography by welcoming Syrian and Afghan refugees.

Some advocates of that view note that the government’s supposed plan is motivated by religion – an attempt to create a “deeply religious” social class.

According to that view, the U.S. withdrawal from Afghanistan created a power vacuum and Turkey’s government responded to that development by making room for a Taliban-like brand of Islam with the help of Afghan asylum-seekers.

At the same time, Turkish President Recep Tayyip Erdoğan’s remarks about the Taliban are being distorted to support that claim.

It goes without saying that Turkey’s diverse approach to Islam has nothing to do with the Taliban’s hardliner/Salafist mindset.

Still, Islam, as a common denominator, has obviously contributed to the presence of Turkish troops in Afghanistan for the last two decades.

At this point, Turkey seeks to engage with the Afghan government and the Taliban in order to ensure Kabul Hamid Karzai International Airport's safety. That step, in turn, is part of a broader attempt to manage the geopolitical void that the United States will leave behind.

In addition to the security concerns of Afghanistan’s neighbors, there are questions about migration from that country – questions that neither Turkey nor the European Union can simply avoid.

In this regard, Erdoğan has no interest in legitimizing the Taliban or aligning his approach to Islam with the Taliban’s interpretation.

He merely strives to create a political framework to quickly restore Afghanistan’s political stability. By taking that step, the Turkish president aims to stem the arrival of Afghan refugees via Iran.

The third myth, which primarily appeals to the Western media, is that Turkey exploits the refugees to mount pressure on Europe. Critics argue that European leaders must not allow Erdoğan’s “regime” to “blackmail” them.

Ironically, it is the Europeans, who still lack a common migration policy, that violate the 1951 Geneva Convention.

EU countries have been violent towards asylum-seekers and have systematically violated their human rights.

To criticize Turkey, which hosts more refugees than all of Europe, merely amounts to hypocrisy, fueled by narrow interests.

The Europeans conveniently accuse the Turks of “mounting pressure” on them whenever Turkish officials remind European leaders of their failure to share the burden.

Notwithstanding the accusations against Turkey, Europe’s approach to the refugee question effectively embodies the collapse of “Western values.”

Having backed authoritarian regimes against the Arab revolts, the Europeans took nothing but symbolic steps in response to the resulting humanitarian crises.

In the end, they made xenophobic and Islamophobic policy choices. Europe’s current attitude, which is reckless and cowardly, is a return to its colonial plight and style of oppression.

The fourth and final myth is that Turkey’s government bows to European pressure by ignoring the EU’s failure to share the burden.

It is a matter of public record that Erdoğan repeatedly entered into negotiations with his European counterparts, forced their hand as required, and warned that Turkey could be compelled to stop preventing refugees from reaching Europe.

It is no secret that the Western media demonized the Turkish president for that very reason.

Against that backdrop, the idea that an opposition leader will “drive a hard bargain” with Europe to solve the refugee question is nothing but a pipe dream.

The opposition cannot find a solution by ignoring past steps and statements or blaming the government, together with the Europeans, for Europe’s failure to live up to its responsibilities.

What Turkey’s political elite needs to do, instead, is set aside the myths and join forces to mount pressure on Europe regarding asylum-seekers.