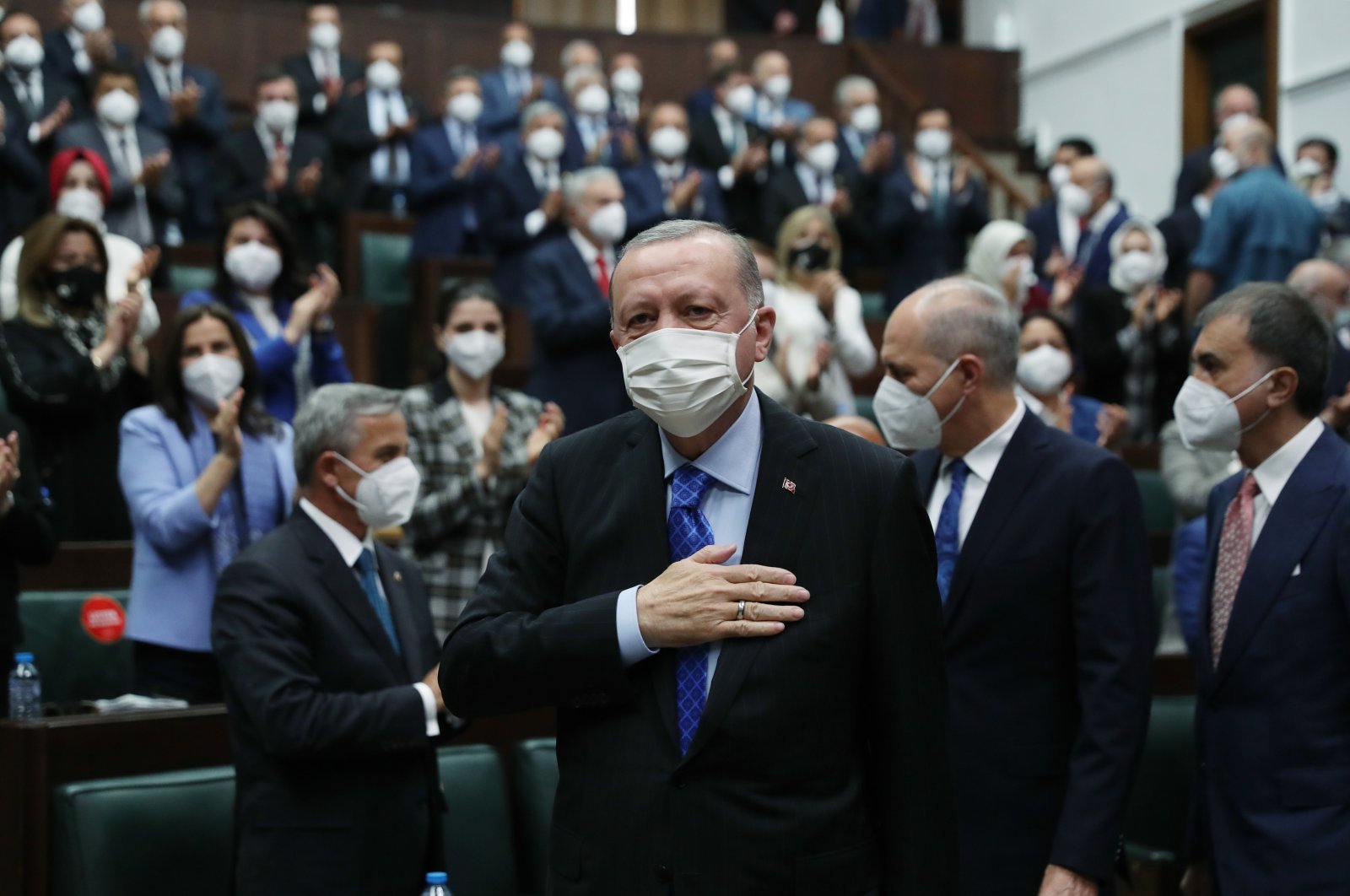 Turkish President Recep Tayyip Erdoğan greets members of his ruling Justice and Development (AK Party) during a meeting in Ankara, Turkey, May 26, 2021. (AA Photo)
by Ihsan Aktaş May 29, 2021 12:05 am
RECOMMENDED

Declaring a new world order, the U.S. began to play the role of the world’s sheriff. As supranational institutions lost their significance, the consequences of this unipolar international order remained ambiguous.

Being the sole hegemon, the U.S. disabled the mediative functions of international organizations, most notably the United Nations, which was treading a fine line between the rival pacts of the Cold War.

The military occupations of the U.S. in the Middle East were intensified after the 9/11 terrorist attacks. Even though the U.S. was responsible for the emergence of al-Qaida, the U.S. administrations occupied Afghanistan and Yemen under the pretext of fighting against al-Qaida. At the same time, the occupation of Iraq was legitimized via Iraq's late toppled leader Saddam Hussein’s holding of chemical weapons.

Being unrivaled in the international arena, the U.S. no longer required the mediatory role of the U.N. As Russia withdrew from the stage of history, NATO's significance diminished as well, at least until the enemy of the new world order was declared to be the rising global terrorism threat.

When the Arab Spring began to overthrow longstanding dictatorships in the Arabic world, a civil war erupted in Syria. In order to change the Syrian regime, most of the Western powers took the field; the members of the Friends of Syria Group reached 60 countries. However, the Syrian crisis soon concluded with a paradigmatic change in the international system.

While Iran and Russia took the battlefield in favor of the Bashar Assad regime, the spirit of alliance among the U.S., Saudi Arabia and Turkey shattered due to a lack of confidence among these old allies.

At one point in the Syrian civil war, Turkey and the U.S. strategically drifted apart. Lacking its conventional alliances, Turkey had to ensure its regional security by pursuing a multidimensional and multilateral foreign policy.

Thanks to its cross-border operations in Syria and Iraq, the Turkish military expelled both Daesh and the PKK from its borders.

Role of gas in conflicts

The discovery of natural gas in the Eastern Mediterranean made the region the heartland of international politics. As the Arab Spring began to backfire, a coup d’état put an end to the inspiring Egyptian revolution. That year, Turkey and Egypt froze their relations.

The Arab Spring also backfired in Libya. The coup d’état led by Gen. Khalifa Haftar took the country captive, cornering the U.N.-recognized government of Fayez Sarraj in the capital Tripoli.

Proving unwavering support for the legitimate government of Sarraj, Turkey turned the tide in the Mediterranean. Being already at odds with each other, Egypt and Turkey came face to face in Libya.

Even though it achieved a series of successes thanks to its military power, Turkey sought to revitalize its relations in the international arena.

Being the two strongest powers in the Muslim world, it was paramount that Turkey and Egypt revitalize their relations in order to strengthen the solidarity among the members of the Organisation of Islamic Cooperation (OIC).

Their diplomatic aloofness was damaging the interests of both of these countries in Libya and the Eastern Mediterranean.

After making use of its hard power in regional politics, Turkey is now aiming to strengthen its relations with Egypt and other countries via its strong diplomacy.

Turkey’s reliance on the soft power of diplomacy in international relations is well-suited with its orientation towards its own economic and democratic development.