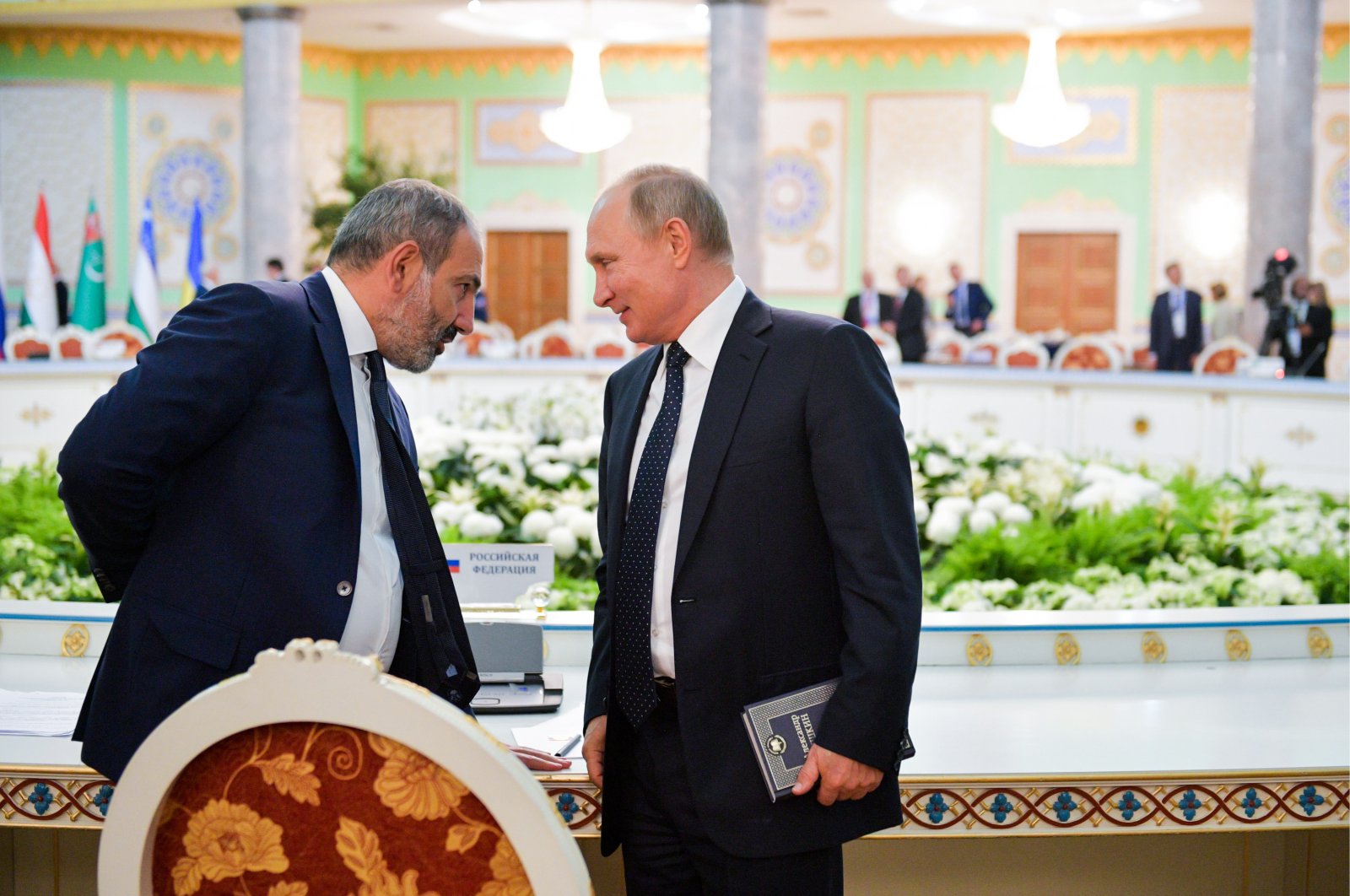 Ever since the collapse of the Soviet Union, its former republics have been hit by revolutions and widespread protests, most notably the Rose Revolution in Georgia in 2003, the Orange Revolution in Ukraine in 2004, the Tulip Revolution in Kyrgyzstan in 2005.

The Kremlin sees these so-called "color revolutions" as a new Western attempt to destabilizing these states, which are still very much under Moscow's influence, at a low cost and with minimal casualties.

In the wake of Euromaidan protests in the Ukrainian capital Kyiv in 2014, Russian President Vladimir Putin blamed the West for overthrowing Ukraine's Moscow-backed president, saying the U.S. was trying to subjugate Russia.

In April 2018, Armenia, another former Soviet republic in the mountainous Caucasus that has been heavily dependent on Russia, followed the footsteps of others.

The protests erupted after the ruling Republican Party in 2015 passed a constitutional change that would change Armenia from a presidential system to a parliamentary system. It would allow Sargsyan to serve as prime minister in the new system when his presidential term expired in April 2018.

Following days of protests, Armenia's government had changed hands. Evoking the Czechoslovak Velvet Revolution of 1989, Pashinian declared a "Velvet Revolution." As the leader of the revolution which forced Sargsyan and his government to resign, Pashinian failed to gain enough votes from the Parliament to become the prime minister himself on May 1, 2018, but was elected in the second vote on May 8.

While he described himself as a post-ideological politician throughout his career, Western sources depicted him as a centrist, progressive and liberal democrat.

In European papers, he was widely portrayed as charismatic and a revolutionary. Some even went further and idolized him as a "fiery political orator" or a "crusader fighting against corruption and oligarchical influence." He was mostly delineated as a "national hero" by Western journalists. However, some of them noted that his image was just built on populism.

While the West was busy selecting him as the "politician of the year," Moscow was watching the merriment quietly. It had already seen Pashinian as a politician with a pro-Western orientation. In 2013, he voted against Armenia's membership to the Russian-led Eurasian Economic Union (EEU) arguing that it was against Armenia's sovereignty and national security.

In 2016, he voted against the Russian-Armenian agreement on a Unified Regional Air Defense System in the Caucasus, claiming that Armenia should develop its own air defense system. "Russia cannot be considered a real guarantor of Armenia's security. This kind of agreement with Russia will create only the illusion of a strengthening of security," he said.

However, after he became the prime minister, it was not that easy to criticize Armenia's relations with Russia and take a stand against Moscow. He recalibrated his statements trying to strike a balance between Russia and the West.

In December 2018, he said Armenia did not seek NATO membership but would continue to preserve relations with the organization. He made every effort to reassure Moscow that the 2018 revolution was not directed against it. He said he would not seek the withdrawal from the EEU since "there are realities and facts that have to be taken note of."

Nevertheless, Pashinian's reassurances did little to eliminate Moscow's doubts about him and his government. Although he said the revolution in Armenia had domestic causes and was not related to the geopolitical situation, Kremlin's discomfort with Pashinian increased when he put former Russian-friendly President Robert Kocharyan and former Prime Minister Serzh Sargsyan on trial for "overthrowing the constitutional order of Armenia" and embezzlement.

But above all, the "color revolutions" have always meant for the Kremlin a growing influence of the West on Russia's sphere of influence, and it was almost impossible for Pashinian to convince Russia otherwise.

When Armenia suddenly attacked Azerbaijan's Tovuz territory on July 12, reawakening a frozen conflict between two counties and sparking war over Nagorno-Karabagh in September, many thought that Russia would back Yerevan without delay.

Since Turkey declared its support for Azerbaijan since day one, many expected Moscow's direct involvement as it would prefer to prevent Turkey's involvement in a conflict in the Caucasus.

Even more so, some thought Russia was the hidden player in the tension between Armenia and Azerbaijan due to the ongoing regional conflicts. According to those who argued that, Russia wanted to open another front in addition to other fronts such as Libya and Syria, in which Moscow and Ankara are on the opposite sides. None was true.

After the July 12 Tovuz attack by Armenia, I argued in the Daily Sabah that Russia sees Pashinian as a Western-backed "revolutionist," hence it would not go into war for Armenia against Azerbaijan. I also claimed that Russia seeks to maintain its ties with both countries. Azerbaijan has been on good terms with Russia, even buying arms from Moscow. So why would the Kremlin put its influence over the Caucasus at risk?

Armenia's supporters desperately expected Russia to join the battle when the war broke out in September and Pashinian begged Putin for help several times as Azerbaijan was outmatching Armenia's military capacity. The hopes vanished as Kremlin did not even lift a finger in Armenia's favor.

In October, Putin cleared Moscow's position over the conflict and said, "The fighting, which to our great regret, continues to this day. It is not taking place in the territory of Armenia." Russia has given a guarantee for military support to Yerevan with an agreement if there is an attack on Armenia.

Putin's statement was also significant in terms of disclaiming Armenia's worldwide propaganda. He was underlining that the Nagorno-Karabagh region was an internationally recognized territory of Azerbaijan; it was not Armenian soil.

Armenia was steadily crashed and burned by the Azerbaijan army in 44 days and no assistance from Russia was on the horizon. On Nov. 8, a cease-fire agreement was signed by Pashinian, Azerbaijan President Ilham Aliyev and Putin, after Azerbaijan announced it had liberated Shusha, the city that Azerbaijanis regards as their historical and cultural center in Nagorno-Karabagh.

Losing Shusha meant the defeat of Armenia and Pashinian had to accept that he lost the war he initiated. Saying that Armenia had the chance to stop the war in mid-October and maintain control of the key city of Shusha if Yerevan did not violate the previous cease-fire agreements, Putin added it would be "suicidal" for the Armenian government to back out of the latest Russia-brokered cease-fire.

Being declared Armenia's "national hero" two years ago, Pashinian has not only led his county to a defeat, but he is also facing the end of his short political career today.

Pashinian was obviously emboldened by some other states to attack Azerbaijan and believed that Russia would eventually back Yerevan no matter how it started.

By "some other states," I mean the ones that hold a grudge against Turkey, but I do not want to share their names. The ones who are familiar with the ongoing tension between Turkey and several other countries can figure out which countries they are.

At the end of the day, Putin has shown that he cannot be tricked easily and that he would not jump into a preplanned conflict that would lead to a Russia-Turkey confrontation.

Putin also gave a lesson to Pashinian, who now faces huge protests at home due to his handling the war, proving that he might have stayed silent and neutral during the Western-backed "Velvet Revolution." Putin didn't forgive and forget what the amateur prime minister did in 2018.

As Pashinian's choices resulted at the end of Armenia's dreams over Nagorno-Karabagh, it is a matter of time he steps down. Most importantly, the former pro-Russian oligarchs will come back to power again and Russia will take back full control of Armenia. In short, Pashinian's defeat also means his Western backers' defeat.