How will the pandemic shape the China-US struggle? 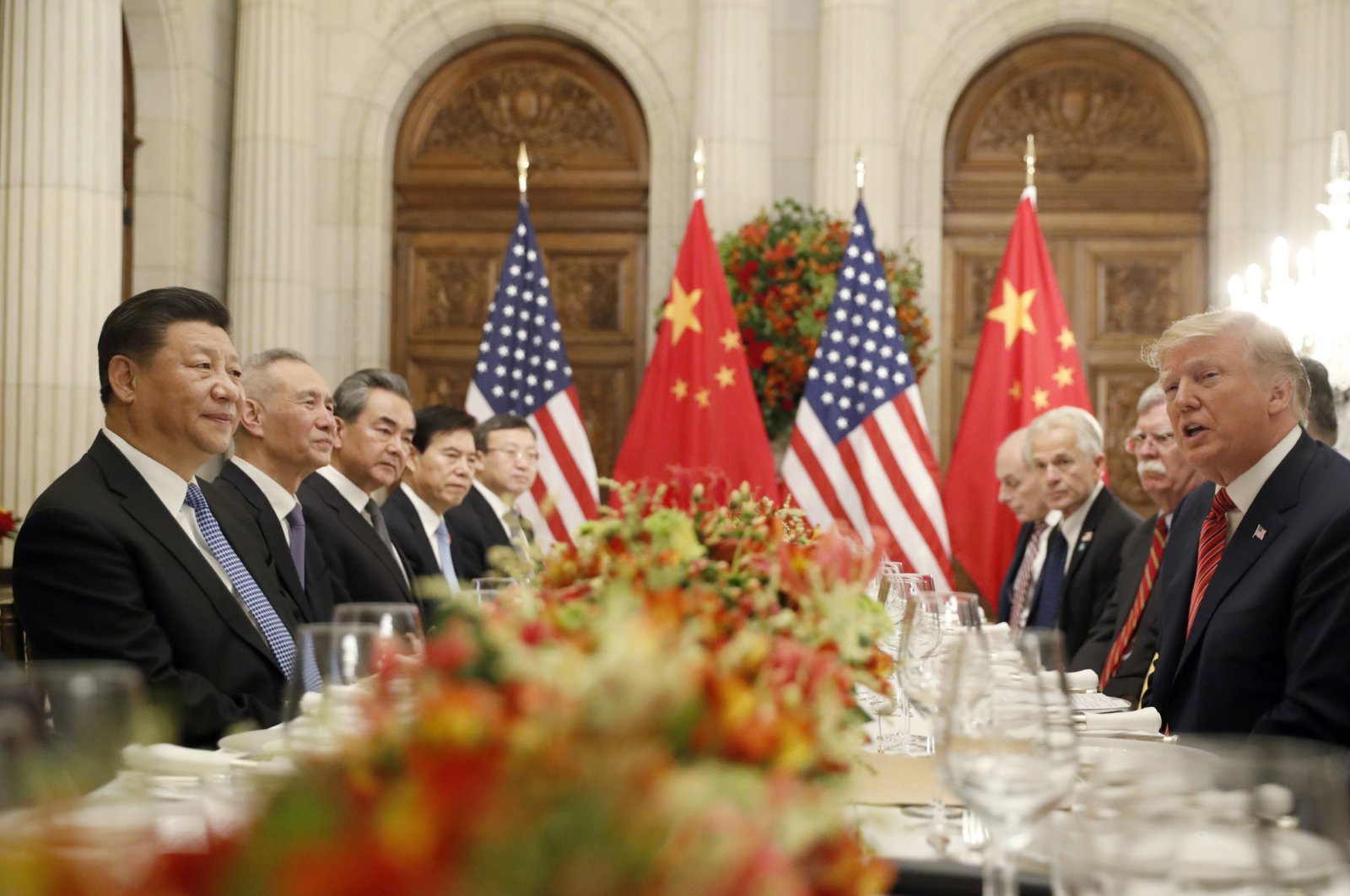 Along with the COVID-19 outbreak, the rivalry between the U.S. and China has also accelerated.

A criminal is wanted in the U.S. – where the pandemic struck the hardest blow – and China is targeted not only by the U.S. President Donald Trump, but by almost everyone.

Trump is insisting on calling the new type of coronavirus “Chinese virus.” In addition to that, he is accusing the World Health Organization (WHO) of being under the influence of China. The attitude of the U.S. mainstream media, which is in another war with Trump, is not much different: They accuse China of being late in preventing the outbreak, hiding the data and not being transparent.

Of course, Trump's insistence on calling it the “Chinese virus,” is linked to the November 2020 elections. He wants to avoid the fact that Washington did not successfully manage the fight against the epidemic in the U.S. Trump will be trying to keep the lid on the U.S.' failure, and that is why he will not give up attacking China anytime soon.

Trump opponents, on the other hand, are accusing Trump of being “racist,” but they share the same idea with the U.S. president that China is a threat to the world, which is currently ruled by the U.S. If we take into account the damage caused by the epidemic to the U.S. economy, it looks like it will be difficult for Beijing to erase the image of being the “Chinese threat” in the eyes of the American people.

China is currently overwhelmed with the accusations and failing in changing its negative image spread from the U.S. to the West with its propaganda techniques including its perception management strategies, and that makes Beijing more aggressive. China is referring to unconvincing arguments such as claiming, “The virus (was) brought to Wuhan by American troops in October 2019.” This kind of counterattacks makes China looks like it's losing its temper, and its control as well.

In fact, Beijing seems to have left COVID-19 behind thanks to the strict measures it has taken, even though it was late in informing the world or even its own community about the disease. Although the data it shared about the number of cases and deaths are not convincing the world, it has quickly taken control and achieved success by establishing large hospitals and putting Wuhan under quarantine.

China is currently focused on helping the world out in the fight against the pandemic and trying to find a vaccine, cure, etc. However, problems such as the testing kits it sold to Europe giving incorrect results, do not help China in making the world forget the fact that it is the “birthplace of the coronavirus.” These kinds of issues will probably harm China’s bid to lead global virus efforts.

At the same time, no one can deny that the success of China in the fight against the coronavirus is based on extreme measures. Some protests of Chinese people against the local administrators in Wuhan went viral on social media (even though they were not large-scale), the harsh methods of Chinese security forces against some of those who did not obey the quarantine rules, emphasizes that the truth behind China’s winning the war against the virus is “authoritarianism” and a “communist regime.” And this frightens democratic countries.

Nevertheless, keeping in mind that it is an authoritarian regime, we can say that China has been successful in terms of domestic politics. After Chinese President Xi Jinping's visited Wuhan and following the end of quarantine in Wuhan, life has started to return to normal in China. This reveals that Beijing has managed to maintain its image among the Chinese people after the health crisis. Although the Chinese central government has had trouble managing the crisis, it seems to recover in the aftermath and put things back on track.

However, the economic crisis, which is an expected outcome of the pandemic, is now at China's doorstep. While China will be trying to come up with a solution soon in order to limit the impact of the economic crisis that will affect its global expansion policy, it also has to deal with the rising anti-Chinese sentiment in the West.

Sinophobia is nothing new, especially in the West; but it has been fueled with the coronavirus. As people try to find someone responsible for the pandemic, there has been an uptick in the rhetoric blaming China and the Chinese people in social media and elsewhere. Trump's words have led quite a lot of people to call the pandemic “Chinese virus,” Wuhan virus,” and the "Kung flu.”

The marginalization of China all over the world will probably enable Beijing to reinforce its emphasis on “nationalism” and increase its anti-American propaganda inside the country. Thus, China, of which economic growth is expected to decline in 2020-21, will succeed in keeping the loyalty of the Chinese people, who will have to face the difficulties of the economic crisis.

Indeed, the fact that Europe and the U.S. were the hardest-hit areas caused a big wave of fear in the West. Trump suspended immigrants’ entry to the U.S. and not a lot of people in Washington stood against him. This is the subject of a separate article, but it is certain that anti-migrant/anti-refugee sentiment will increase in the world where xenophobia is already on the rise. China, which will continue to be known as the source of the coronavirus, will have to face Sinophobia. An atmosphere of hate and fear is already having harmful consequences, and now, incidents of racial hatred towards Chinese people, and Asians as well, have been reported in several countries. In some places, Chinese people have already been banned from restaurants or markets since the virus started to spread.

China is likely to be the “new marginal” of the world at least for a while and especially if a second wave hits the world. This may increase the possibility of a cold war between the U.S.-China, and perhaps even the Western world and China. This may affect China's major projects, such as the Belt-and-Road Initiative, and its expansionist policy in Europe would slow down for a certain period of time.

Even though China enters an inward-looking era in the short term, it will not give up its global policies. It might even use other countries, which are under its influence, as a cover for a certain period of time. On the other hand, it will respond to anti-China propaganda out loud this time.

The world has turned its face to the East, China, for a long time. Will the coronavirus stop it? I do not think so. Even if it is interrupted for a short time, the probability of this trend coming to an end is close to none. The U.S.’ failure to manage the health crisis both domestically and globally is a trump card that China will use against the U.S.

Therefore, the U.S. and China will continue to attack each other with new apparatus in their hands in the new superpower rivalry that they were already in. Since the fear of China increases not only among Republicans but also within Democratic circles in the U.S., the struggle for hegemony between China and the U.S. will continue even if Trump loses the presidential race against the Democrats. The struggle between the two superpowers will grow in the South China Sea, Africa and other regions such as Pakistan-India, and things will get hot with other actors getting involved.

Beijing can stop Sinophobia that will be unleashed by the U.S. and likely to spread to the other parts of the world, by providing financial aid to countries that will be severely affected by the economic crisis. That is, the fight will eventually sit on the axis of the economy. While the world is almost dependent on China regarding its need for intermediate goods, it is another determining factor where the U.S. will look for alternatives for both itself and its allies. In this context, it is useful to follow the news that some international companies have already started to move their production sites to countries outside China since the pandemic started.

On the other hand, we will definitely see that an escalating dispute on China’s tech-export, such as 5G technology or Huawei products. Washington has already started to tighten import and export controls on technological goods to and from China, aiming to keep key technology products away from the Chinese military, broadening and accelerating a process that has been underway for a couple of years. In return, this will make Chinese firms to accelerate their efforts to “de-Americanize” their supply lines. Foreign companies may be forced to do the same if they want to continue work with China. This can severely disrupt technology supply chains in China, the U.S. and around the world, adding new problems that the coronavirus has already caused for global trade.

We have already seen an increase regarding the conspiracy theories about 5G in this period. This tension will not only remain as a war of words, but also technological espionage activities will increase. In this period, the focus of the main fight of the world may shift to biological weapons and biotechnology. Cyberattacks will increase, and cyberwar between the two countries will rise.

To sum up, the trade war between China and the U.S. has found a new path with the novel coronavirus.