Int'l Women’s Day: A day to mourn, not to celebrate 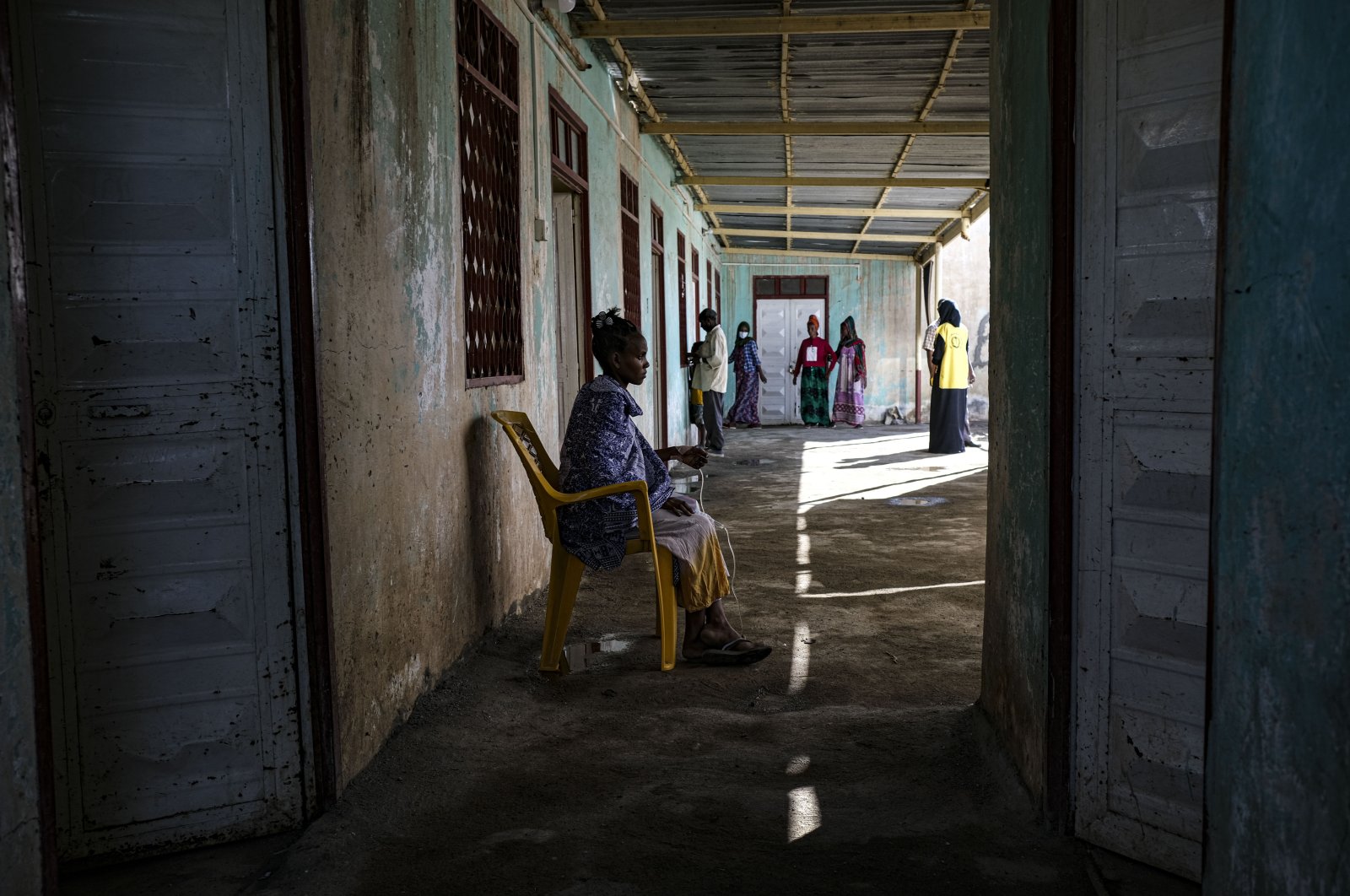 Refugees from the Tigray region of Ethiopia wait to receive basic medical attention from an understaffed clinic, in the east Sudanese border village of Hamdayet, Sudan, Dec. 6, 2020. (Photo by Getty Images)
by Merve Şebnem Oruç Mar 11, 2021 12:05 am
RECOMMENDED

I wish I could be optimistic, but March 8, International Women’s Day (IWD) is not a a day to celebrate for me. Since more and more women are suffering around the world, I believe there is nothing to celebrate but plenty to mourn.

It was a day to remember the brave and determined women who played an extraordinary role in history, no matter what kind of troubles they came across, and paved the way for us to carry the flag to the future.

It was once a day we celebrate the fruits of decadeslong activism and promise to commit ourselves to increase our efforts to achieve equal access to employment, education, politics, social equality and other opportunities, not only for ourselves but also for women elsewhere around the world.

But personally, as a woman, I don't like celebrating it as it has turned into something else. It looks like IWD is not about women’s fight for equality, freedom and rights anymore.

The day has become something like Valentine’s Day or New Year’s celebrations in modern countries, with men sending roses to women on March 8 and then going back to their lazy mood for the next 364 days and not caring about the rights of women on a daily basis.

That being said, I think there is still a lot to do, and I am not just talking about gender discrimination in offices where women are still paid less than men who do the same job or sexual abuse or online harassment and so on.

The increasing number of women at risk of violence, torture, rape and death has been in the headlines in recent years, revealing that there is nothing to celebrate, but many things to worry about.

Furthermore, unfortunately, while we still talk about all the gender-based violence in the modern world, we almost forget the other women who are at greater risk in conflict zones.

That makes the problem not only about women; all of us are responsible for them as what they have been through primarily consists of what could be considered crimes against humanity.

If we don't fight for their rights just like the women who made history, then how can we expect a safer world, especially for our children?

While domestic violence against women is a major problem around the world, violations of women's basic human rights, the number of women who need help in conflict zones such as Syria and Yemen as well as the number of women being held in concentration camps in China are increasing every day, according to reports.

According to surveys, India is the most dangerous country in the world to be a woman because of the high risk of sexual violence, including gang rape and slave labor. They are also faced with acid attacks, female genital mutilation, child marriage and physical abuse.

While nine of the top 10 countries on the list of recent surveys are from Asia, the Middle East or Africa, No. 10 is the U.S., the only Western country included on the list. That might be because of the #MeToo movement in the last couple of years, which has got critics speaking only for white, privileged women despite its black female origin.

Tarana Burke, a black American activist from the Bronx, New York started the #MeToo movement in 2006 by using the phrase “Me Too” on the MySpace platform to raise awareness against sexual abuse and violence targeting women.

Afghanistan, Syria, Somalia, Saudi Arabia, Pakistan, the Democratic Republic of Congo, Yemen and Nigeria are between India and the U.S. respectively on those survey lists.

Don't you think that the women who live in those countries also deserve some campaigns such as the #MeToo movement? Since they can’t speak for themselves, shouldn’t we be their voice?

Conflicts have increased over the last two decades worldwide, and most women trapped in these zones are in danger of rape, gang rape, forced marriage, sexual slavery, sexual mutilation, forced prostitution and trafficking, which are also different forms of violence that are used as “tools of wars.”

The number of women trying to survive in countries entrenched by civil wars is enormous, and the statistics cannot be trusted as they are silenced. They are detained and put in prisons, used as bargaining chips and treated as tools between the conflicting parties. These are not only violations of women's rights but also war crimes.

We are so busy talking about geopolitics, and to be honest, looking for new ways to mess up things in the international arena again and again, and we always forget the main victims in those arenas: women and children.

Let's have a look at some statistics. According to the latest report from the Syrian Network for Human Rights (SNHR), an independent, neutral, nongovernmental, nonprofit, human rights organization, at least 16,104 women were murdered by conflicting parties since the start of the civil war in Syria, while 11,923 women were killed by the Syrian regime.

Additionally, 819 women were killed by the U.S.-led coalition forces and the YPG terrorist organization, the Syrian offshoot of the outlawed PKK and the ally of the U.S. on the ground.

Meanwhile, more than 9,250 women were arrested or forcibly disappeared at the hands of the parties of the conflict in Syria, while at least 8,029 of these were detained by the Syrian regime and are still being held in various detention centers.

The SNHR also reports that regime forces are responsible for sexual violence against at least 8,013 women, among more than 11,523 overall Syria.

However, it is known that the actual number of women raped in prisons is much larger than these figures since most of the arrests are not recorded, the victims are forced to remain silent, or they are ashamed of talking.

At least 92 women were killed due to torture at the hands of the parties to the conflict and the controlling forces in Syria, with 74 of them killed at the hands of Syrian regime forces, the SNHR added.

Women are also used as a propaganda tool by the YPG, with images of so-called female “freedom fighters” battling the notorious Daesh, which has horrifically tortured women, killed them or disgustingly sold them in slave markets. The images were widely published by the Western media, in the magazines and have circulated online for the past seven years.

However, the testimonies of at least 150 women who managed to escape from the YPG/PKK and surrendered to Turkish security forces in recent years, reveal that the terrorist organization exploits women by using their femininity and portraying them as if they are the “heroines” to get sympathy from the Western world, but mostly sending them to commit acts of terrorism, mostly suicide bombings.

A report, published by the Turkish Interior Ministry in 2018 titled “Exploitation of Children and Women by PKK/KCK” (an umbrella organization including all the branches of the PKK in the region),” also cites sexual abuse and the persecution of women in the PKK camps in line with the testimonies.

“I had escaped from stepmother violence and joined the PKK. In five years, I have witnessed the suicide of 11 women along with the execution of eight others who raised their voices against rape,” Gabar Rojbin, a former female member of the PKK terrorist organization, told security forces during her testimony, as previously reported by Daily Sabah.

Tragically, 90% of the women who have been deceived or abducted by the organization are raped within the first 30 days regardless of their age, the collected data shows.

“Girls, whose ages range from 12-16, are mostly recruited by the terrorist organization through various methods and motivations," Nur Özkan Erbay, Daily Sabah's Ankara representative, reported in 2019 after researching the women who escaped from the PKK and were questioned by the Turkish intelligence.

According to a Turkish intelligence report, 79% of the women joining the PKK are in the 15-22 age group, while 55% of women taken to the mountains after being deceived or kidnapped were 15-18 years old.

That means the PKK/YPG also uses “child soldiers,” which have also been photographed and reported many times by human rights organizations but ignored by Western authorities.

As a journalist who periodically follows these reports, I can say that the numbers are still increasing although the violence in the war-torn country has de-escalated in the last couple of years.

And I, once again, have to note that the real figures quite likely are much higher as collecting data and keeping the statistics is almost impossible for humanitarian organizations. Also, we have to keep in mind we have only discussed the cases in Syria.

Meanwhile, in China, the Uyghurs are losing their freedoms systematically. Especially in the concentration camps, which are defined as “re-education camps” by the Chinese government, ethnic Uyghur and other Muslim women are raped, sexually abused and tortured, according to testimonies of people who experienced or saw evidence of those organized crimes.

China denies these allegations; however, thousands of Uyghurs outside of China call on the government to tell them where their missing relatives are. Many Uyghur women also say that their children have been taken away from them, and they don’t know where they are.

Now I want to ask whether you think that the abusers and torturers of those women give roses to them on March 8, International Women’s Day, and stop beating or raping them just for 24 hours as a gesture?

So, as I said at the beginning, in my opinion, there is nothing to celebrate on March 8 but a lot to mourn.