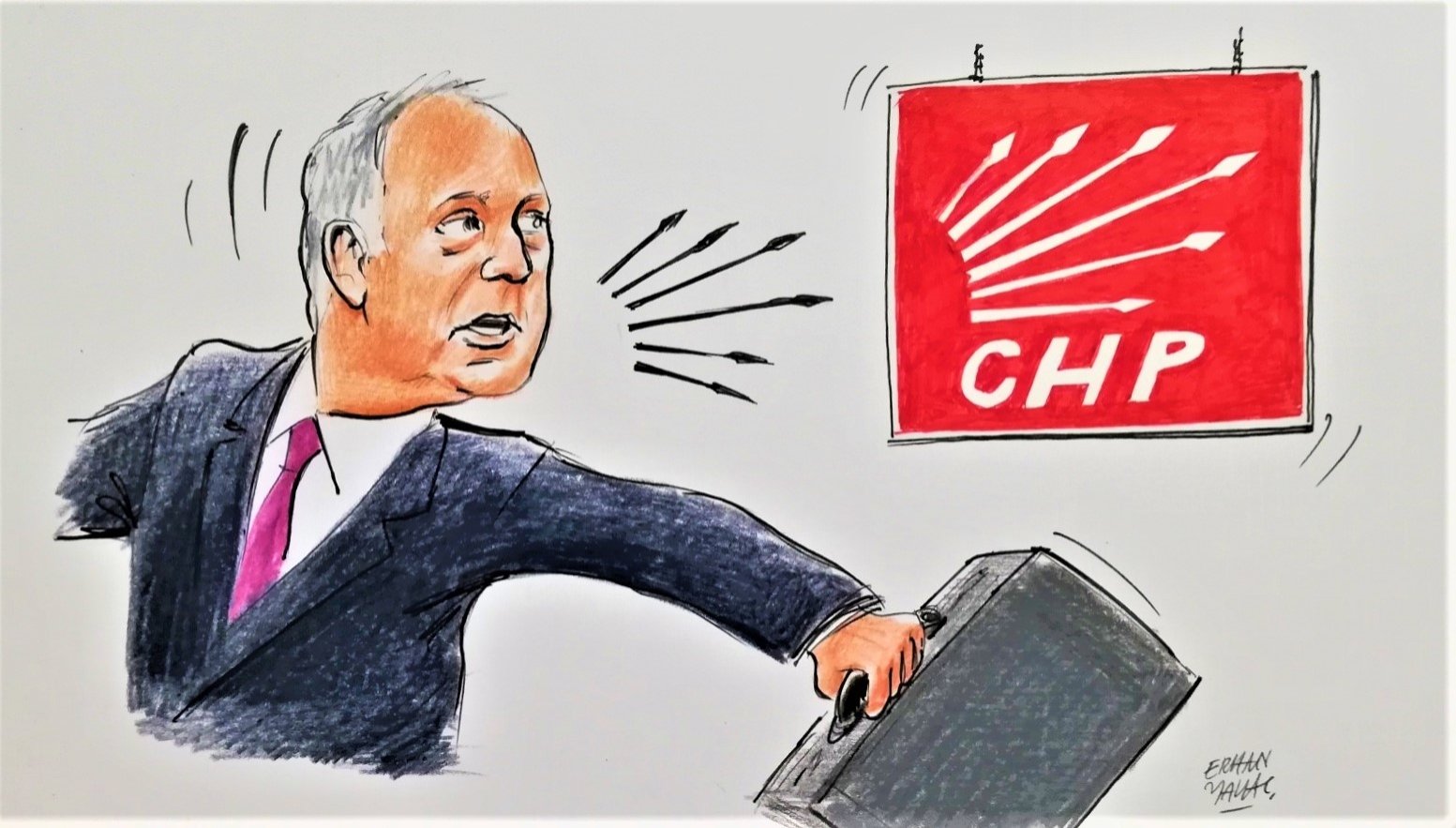 Muharrem Ince, who was the main opposition Republican People’s Party’s (CHP) presidential candidate in 2018, resigned on Feb. 8, following in the footsteps of three other parliamentarians. His critique of the CHP leadership was strongly worded and comprehensive.

Describing the main opposition party as a movement “devoid of respect for principles, values, bearing, merit and hard work,” Ince alleged that the CHP had ceased to be part of “Mustafa Kemal Atatürk’s legacy” and turned into “a mere sign.”

His decision to leave the party, he added, was about parting ways with “those who beg the United States for democracy, those who talk about Mustafa Kemal but not Mustafa Kemal Atatürk and those who refuse to hold a vote for minority whip” – along with “fake CHP supporters, defenders of Gülenists and pro-(George) Soros figures, those who fail to grasp the Blue Homeland and those who said that Turkey ‘unfortunately’ assisted Azerbaijan.”

The former CHP politician’s strong emphasis on the republic’s founder, in turn, equipped his remarks with the intensity and symbolism necessary to take a jab at the CHP’s identity and ideology.

Ince said that he decided to leave the main opposition party to save Atatürk’s legacy, “just like Atatürk himself left Istanbul.” Although he insists that he did criticize the government and did not divide the opposition, Ince’s resignation is about opposing the opposition.

Even if we assume that the opposition’s poor performance against the government was his point of departure, his new movement will inevitably compete with the CHP, the main opposition party, as its offshoot. In this regard, the decision by Ince and Mustafa Sarıgül, another former CHP member, to form their own parties promises to introduce Turkey to the phenomenon of opponents criticizing the opposition. Keeping in mind that the opposition runs on anti-Erdoğanism, the former presidential contender’s latest move is noteworthy.

The idea of finding a third way, distinct from the government and the opposition, however, is not new. Young political parties like Democracy and Progress (DEVA) and the Future Party (GP) also made similar claims initially.

In the face of mounting pressure from the CHP, the Good Party (IP) and the Peoples' Democratic Party (HDP), they ended up having to apologize for their past involvement with the ruling Justice and Development Party (AK Party).

In addition to defending their own actions, those politicians became the most vocal critics of the Turkish president.

This explains their subordination to the CHP-dominated opposition bloc’s rhetoric. Since the fringe parties use the same talking points as the main opposition party, hardly anyone finds the CHP-like reactions of less popular movements to Erdoğan’s latest call for constitutional reform surprising.

As a former CHP official, Ince now seeks to find his own way – however challenging and contradictory.

On the one hand, he will tell CHP voters that he supports the "real" CHP. For that purpose, he will have to criticize Kemal Kılıçdaroğlu, the main opposition leader, and his entourage for a long time.

Ince will highlight all the mistakes committed by his old party to win over the CHP base, which has a tendency to vote strategically.

On the other hand, the former CHP heavyweight will emphasize his points of agreement and departure with the People’s Alliance. In other words, he will oppose the government and the opposition alike. Whether that task can be accomplished remains to be seen. But there are several contradictions he needs to address before doing so.

First of all, Ince announced that his party won’t join the People’s Alliance. Yet it is extremely difficult for him to join the Nation Alliance, provided that he parted ways with the CHP – its largest member. That’s what happened with the IP, which was born out of the Nationalist Movement Party (MHP), and the fringe parties that broke off the AK Party.

Secondly, since there are many political parties criticizing the government, anything Ince says about the main opposition party will inevitably attract more attention. He will also be accused of playing into Erdoğan’s hands for his steady critique of the CHP. If he bows to pressure and stops criticizing the CHP, his movement will be reduced to just another fringe party among opposition ranks.

Last but not least, Ince will have to work extra hard to be part of the same alliance as the CHP in the 2023 elections. It may not be enough for him to target the People’s Alliance and the CHP simultaneously either.

As such, the new parties formed by former CHP heavyweights Sarıgül and Ince may join an already fragmented opposition’s internal strife. At the same time, those parties may end up fighting over voters who are on the fence between the CHP and the IP, or the IP and DEVA.

A potential amendment to the election law, too, may change the fate of Turkey’s numerous fringe parties. So let’s get ready for some colorful days in domestic politics.