Possible outcomes of the Kazakhstan protests 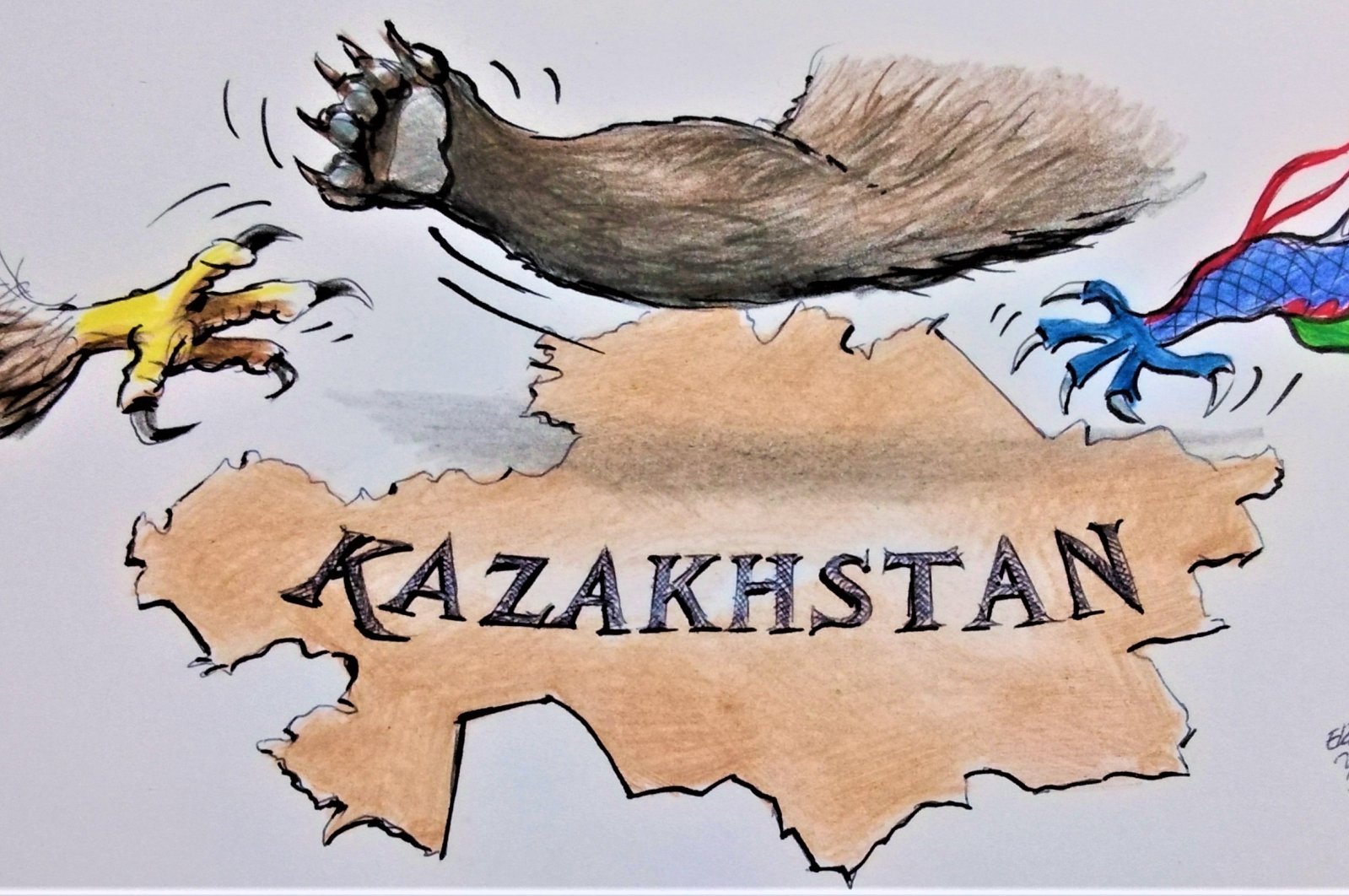 Illustration by Erhan Yalvaç.
by Burhanettin Duran Jan 10, 2022 12:05 am
RECOMMENDED

A protest over an increase in liquefied natural gas (LNG) prices. Violent clashes with the police. Public buildings on fire. Looting. Those developments in Kazakhstan, an island of stability in Central Asia, shocked the world and turned all eyes to that country.

The protests kicked off on Jan. 2 in Zhanaozen, a city in the Mangystau region home to natural resources, industrial plants and a large population of workers. That the coronavirus pandemic’s negative impact on the population’s socioeconomic standards fueled unrest in Kazakhstan’s western parts, which generates wealth and is known for its tradition of opposition, was not particularly surprising to experts. Indeed, they recalled that similar protests had erupted in 2011, 2015 and 2019.

Yet the demonstrations turned violent in Almaty, the former capital, two days later, despite the reversal of the controversial price hike and the government’s resignation, as protestors destroyed a statue of Nursultan Nazarbayev, the country’s founder, in the city of Taldikorgan. Those events immediately brought to mind the “color” revolutions and the Arab revolts. Some even suggested that what happened in Kazakhstan, an oil-rich and traditionally stable country, could create a “domino effect” in nearby places like Turkmenistan, Uzbekistan and Kyrgyzstan. Yet others coined the term “Turkic spring” to draw parallels between the situation in Kazakhstan and past examples. Meanwhile, many questioned whether the United States or Russia could be responsible for the protest, which turned violent quite quickly. By extension, they accounted for what happened with reference to “the activities of militants who were trained abroad” and “authoritarianism, the failure to reform, corruption, stratification and the Nazarbayev family’s monopoly on the Kazakh economy.”

It goes without saying that many states have accumulated plenty of experience about such demonstrations thanks to the Arab revolts and other popular uprisings. Kazakhstan’s president, Kassym-Jomart Tokayev, requested assistance from the Collective Security Treaty Organization (CSTO) on Jan. 6, seeing that he could not stop the violence despite meeting the group’s demands.

The organization, which had turned down a similar request from Kyrgyzstan in the past, deployed 2,500 soldiers to Kazakhstan in order to “help with the protection of vital facilities.” On Jan. 7, Tokayev announced that those foreign soldiers would remain in his country “for a short and limited period of time.” He added that the constitutional order had been “largely restored” in Kazakhstan.

Officials from the United States and the European Union, in turn, expressed “grave concern” over the deployment of Russian troops to Kazakhstan.

In his capacity as the rotating president of the Organization of Turkic States, President Recep Tayyip Erdoğan told his Kazakh counterpart that he “stood with Kazakhstan against the rebellion” and offered to share “all kinds of technical knowledge and experience” with Tokayev.

Provided that the situation has been taken under control to some extent, Kazakhstan has to do its homework – including implementing reforms to make income distribution fairer – to ensure that those demonstrations, rooted in the country’s socioeconomic transformation, do not evolve into persistent acts of terrorism.

As a country where Russian, American, Chinese and other foreign companies have invested, Kazakhstan cannot address problems by isolating itself or overhauling its multidimensional foreign policy.

Under presidents Nazarbayev and Tokayev, Kazakhstan came to be known for its multidimensional foreign policy that pursued a balance between Russia, the United States and China. It remains to be seen how the most recent developments will impact that foreign policy, which paid due attention to Turkey and the Turkic world as well. In other words, the deployment of Russian troops to Kazakhstan opened to discussion, yet again, the question of Moscow’s influence over that country. What came up included President Vladimir Putin not seeing Kazakhstan as a real country, Russians constituting 20% of the population, and Russian nationalists demanding the partial annexation of Kazakhstan. Moreover, some claimed that Putin’s agenda toward former Soviet republics (including Ukraine, Georgia and Belarus) manifested itself in Kazakhstan.

The other reminder relates to China. Kazakhstan, which received a lot of investment from Chinese companies, plays a crucial role in Beijing’s Belt and Road Initiative. It was noteworthy that the French newspaper Le Monde linked the protests to Kazakhstan’s rapprochement with Turkey.

A new era of instability is making headway in the territories between Central Asia, Afghanistan and the Caucasus. Turkey could play a stabilizing role in that new period. There is no reason to assume that Ankara’s new role, which entails the strengthening of the Organization of Turkic States, goes against the short- and medium-term goals of Russia and China.

How long Russian troops will remain in Kazakhstan is an important question. One would expect Moscow, however, to refrain from involving its forces in a crackdown on Kazakh protestors directly. Otherwise, the current demonstrations could assume a Kazakh nationalist character and, by extension, drag the Russian minority in the country’s northern provinces into violent clashes.