Taliban cannot continue as a bunch of students anymore 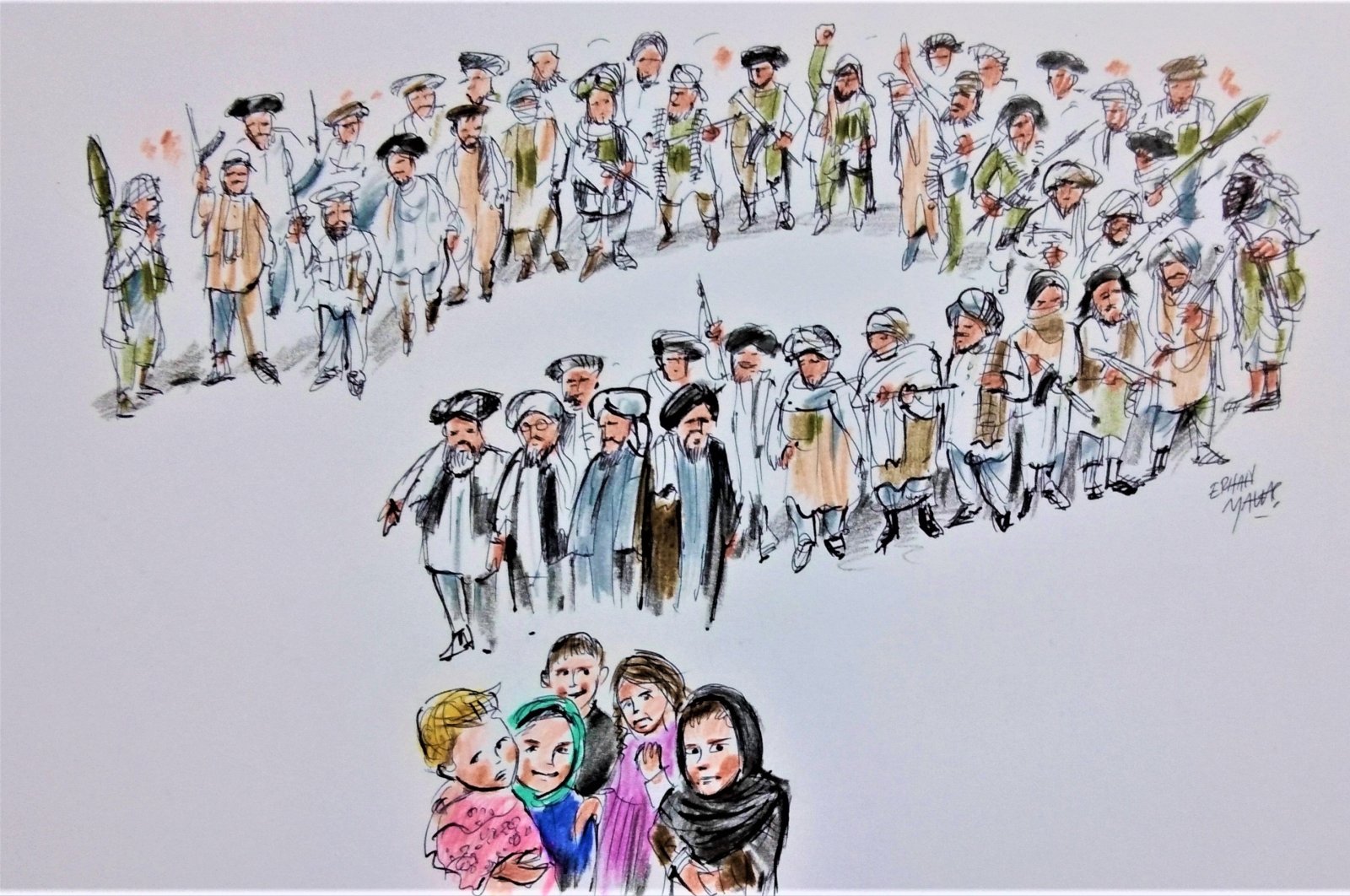 The Taliban should know the world will judge them not by their moderate words, but by their deeds. Their insistence on their own perverted interpretation of Islam is a direct route to political and economic isolation and the eventual dismemberment of Afghanistan

The Taliban thinks the “Afghan government” lies before them like a promised land. But it does not. The last time they had the opportunity to run the Afghan government, they blew it. As the result of tribal infighting and the mismanagement of its elders, the Taliban alliance could not create a true coalition to run the country. In five short years, the leaders of the Afghan Taliban, who were really a bunch of students believing in a uniquely out-of-shape interpretation of Islam, lost control to the “Arab Afghans.”

As far as religion is concerned, those Afghans were “plus royaliste que le roi” (more royalist than the king); they used to go to India to get trained in the doctrine called “Taqlid” (conformity to legal precedence of the Prophet Muhammad) in Darul Uloom Islamic seminary in the town of Deoband, India. Those who came back from there would be treated as if they had seen the Prophet himself by the poor, illiterate Pashtun children.

The Deobandis were so degenerate in their interpretation of Islam that, for example, they would allow only "daf" (a frame drum musical instrument used in popular music in the Middle East) but would not allow for any other musical instruments, for its name was mentioned in a saying of the Prophet Muhammad.

The Taliban destroyed many historical monuments including the famous 1,500-year-old Buddhas of Bamiyan. Those who knew or came into contact with Prophet Muhammad or his companions that had opened the subcontinent to Islam had crossed by those monuments and many other Buddha sculptures but had not harmed them.

When the Americans and the British decided to start a war against the Soviet occupation in Afghanistan, these fanatic Muslim groups provided the best candidates; yet they needed a contractor to organize the war effort. Those young students of madrassas had to learn how to hold a rifle, throw a grenade. That contractor was the son of a purveyor of the U.S. air bases in the Saudi Kingdom: Osama bin Laden. He was charged with creating militias out of mullahs and their students in those unofficial seminaries.

Bin Laden first conscripted the leader of the largest network of those seminaries: The Haqqani network’s Jalaluddin Haqqani, who had already started organizing his own “jihad” against the Russians and their local puppets. Haqqani and his sons had thrived off the contacts made during the Cold War.

In the early years of the short-lived Taliban government, the U.S. had noticed the mistakes they had made by putting Osama bin Laden in charge of the civil war they had organized. Therefore, they wanted to have Jalaluddin at the helm, but he refused the U.S. and Pakistani calls to sever his ties with the other “mujahedeen” groups; later in 2005, the U.S. and President Hamid Karzai refused his request to have a dialogue with the Afghan government. He died in 2018.

Sirajuddin Haqqani, Jalaluddin’s only surviving son, is now one of the leaders of the Taliban and acts as the deputy leader of the group. He joined the Doha Meetings as well as the Taliban’s visit to Moscow and Beijing; he, too, signed the agreement with NATO.

The young Haqqani (his birth is estimated to have taken place after 1973 but before 1980; he is not so young) in his February 2020 New York Times opinion piece titled “What we, the Taliban, want,” wrote that he was convinced that the killing and the maiming had to stop. He purported that the kind of government Afghanistan should have after the foreign troops withdraw would depend on a consensus among Afghans. He said that consensus would be built for the first time by a process of genuine discussion and deliberation free from foreign domination and interference.

Nice words! However, he and his colleagues should remember a couple of things that the common heritage of humanity should have taught us.

The first thing Sirajuddin and all other leaders of the Taliban should know is that they are a group of armed militias with no inner discipline to be proud of. No genuine discussion and

deliberation can happen when one of the discussants sits at the table with machine guns. No one can express his or her sincere opinions under the shadow of weapons, especially if one side had proven that it usually does not honor its word. Last week’s United Nations documents show that the militias are going house by house seeking NATO workers with the intention to execute them.

The second thing is the absolute necessity of having elections after the interim transitional government. The Afghan Parliament is the oldest democratic institution in Asia; its new members should be elected by the Afghan people. No government is legitimate if it is not elected by the people. As Sirajuddin wrote in his NYT article six months ago, Islamic or not, no system can be just unless all Afghans have equal rights. Equality cannot be guaranteed by simply saying so; it needs to be proven by the ballot box.

The “partnership with other Afghans” can only be realized via the ballot box. There can’t be armed, bearded men in peran tumban or shalwar kameez (shirt and pants Pashtun style) guarding those boxes. If “the new Afghanistan” will be “a bastion of stability ... where nobody feels threatened on our soil” as Sirajuddin wrote and Abdul Ghani Baradar, the Taliban’s de facto leader, repeated in his public announcement, then there is absolutely no place for armed militia in talks and elections.

The third major requirement is the necessity of talks. Defining a common future for Afghan groups needs to involve talks to resolve intra-Afghan disagreements. For the first time in a long while, the Afghan people are finally free of foreign fighters, especially of the extremists known as Arab Afghans. Al-Qaida further complicated the traditionally difficult tribal and ethnic unity in the country. Unlike al-Qaida, which pursued global goals using global means, the Haqqani and other similar Afghan groups, are only interested in Afghanistan and the Pashtun regions.

Jalaluddin Haqqani never fully believed in al-Qaida's intentions and goals. Sirajuddin Haqqani is now in a position to convince the world that (a) the Taliban don’t believe the future of Afghanistan is predicated on isolation from the rest of the world and (b) the Taliban’s commitment to break with al-Qaida and pursue a peaceful resolution to the conflict is real. The proof of all these is in the agreement they are going to make with the Northern Alliance – the United Islamic Front for the Salvation of Afghanistan.

The years of President Burhanuddin Rabbani and former Defense Minister Ahmad Shah Masoud are over. The Northern Alliance should not be regarded as an ethnic resistance force. Their allowing the peaceful takeover of Afghanistan by the Taliban shows that the Panjshir resistance force, led by Ahmad Masoud, son of late Afghan politician Ahmad Shah Masoud, and Vice President Amrullah Saleh, should be taken as signaling their willingness for peaceful cooperation instead of showing resistance.

Reports about groups in Afghanistan are politically motivated exaggerations by the warmongering players on all sides of the war. The Taliban leaders should remember their own words in the NYT article:

“It is not in the interest of any Afghan to allow such groups to hijack our country and turn it into a battleground.”

They also should know the world will judge them not by their words, but by their deeds. Their insistence on their own interpretation of Islam is a direct route to political and economic isolation and eventual dismemberment of Afghanistan.