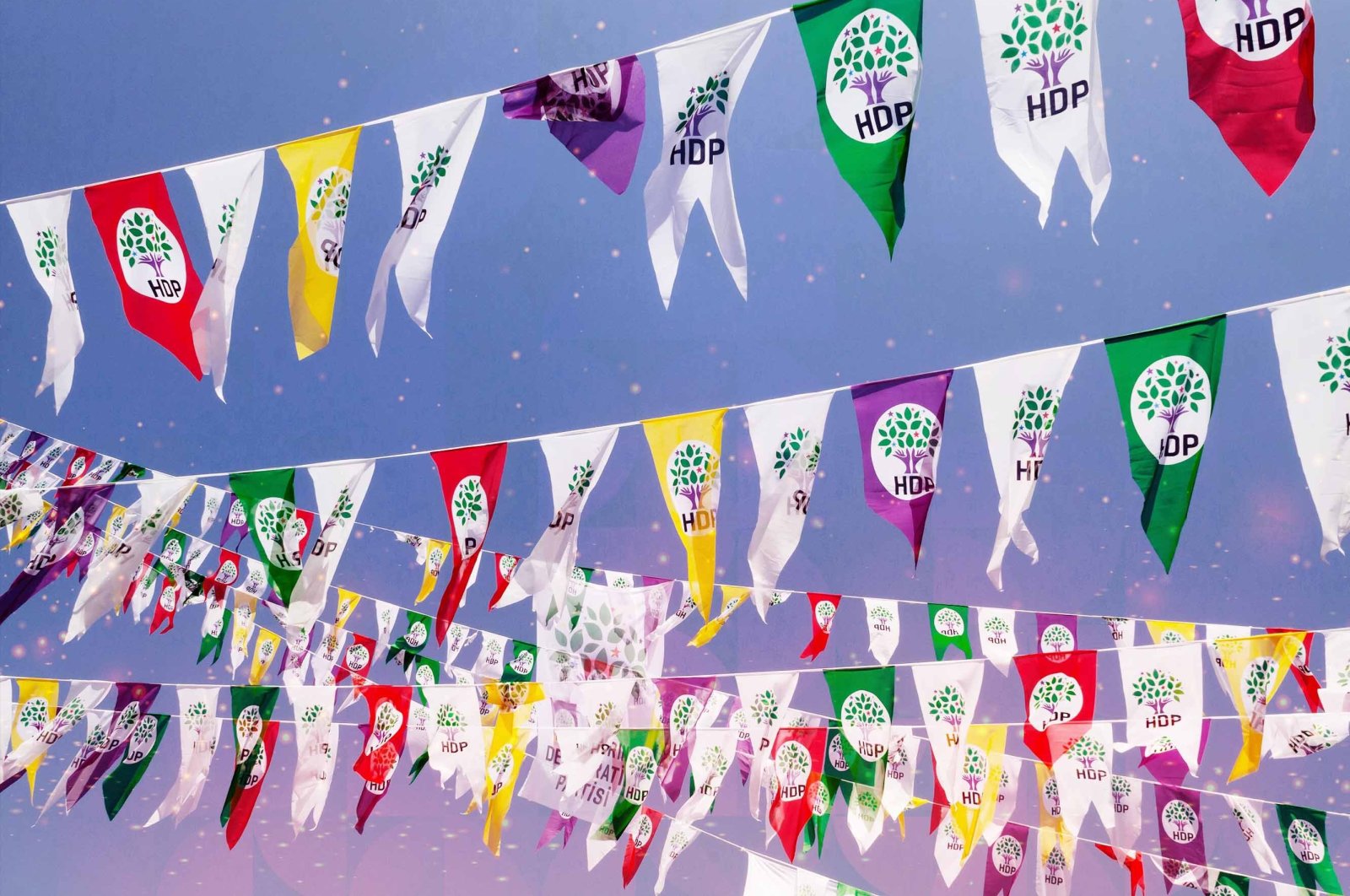 The flags of the Peoples' Democratic Party (HDP) wave in the sky. (Photo by Shutterstock - edited by Büşra Öztürk)
by Burhanettin Duran Jan 15, 2022 12:05 am

Considering the terrorism issue and political fronts, it wouldn't be a surprise if conservative Kurds voted for the People's Alliance

A recently discovered picture of Semra Güzel, a parliamentarian from the Peoples’ Democratic Party (HDP), standing next to a PKK terrorist pushed “the HDP question” higher in Turkey’s political agenda.

That party’s fate will be decided by the Constitutional Court, where a closure case is already underway. Regardless of the court’s ruling, however, we already know that the HDP’s future and how various parties responded to related developments will be a major issue on the campaign trail.

In other words, when it comes to the political war of words, “the HDP issue” goes beyond electoral alliances and potential candidates. Instead, it creates an atmosphere of strong accusations from centrist parties.

The main issue will be how the HDP’s fate relates to the matter of “counterterrorism” and where each politician stands on that issue – or doesn’t. The number of votes cast in support of the HDP cannot possibly absolve the movement of its organic ties to terrorism, and the court system acts on the basis of concrete situations.

It is clear, however, that millions of citizens didn’t voted for the HDP so that it would carry out the PKK terrorist organization’s orders.

The People’s Alliance has already criticized the main opposition Republican People’s Party (CHP) and the Good Party (IP) over their collaboration with the HDP. The response to that critique, too, signals that the Turkish people will have many conversations on counterterrorism, the Kurdish question and the inclinations of voters of Kurdish origin, individually and in connection with each other.

That multilayered discussion inevitably leads to the following questions: What kind of future awaits Turkey? Where will each candidate take Turkey?

President Recep Tayyip Erdoğan’s statement that “they have reduced (Mustafa Kemal) Atatürk’s party to (being the PKK’s) foot soldier” hints at the critical level of that debate. That CHP Chairperson Kemal Kılıçdaroğlu referenced the ruling Justice and Development Party's (AK Party) “Kurdish initiative” in his response, in turn, suggests that he was forced to play defense. Meanwhile, it is unlikely that the CHP will finally unveil its Kurdish report and adopt an active position.

The others (e.g. the Felicity Party (SP), the Democracy and Progress Party (DEVA) and the Future Party (GP)) have been left without influence and remain stuck between the ideal candidate and planning the transition period. They are also unlikely to move away from the CHP’s anti-Erdoğan brand of opposition to find a “third way.” Their leaders cannot hide that they have settled for a CHP-dominated kind of politics by visiting the provinces either. If anything, those visits further highlight that fact.

Yet the IP finds itself in the most difficult position. They either remain silent in the face of the HDP’s scandalous acts, as IP Chairperson Meral Akşener did when an HDP member claimed that “this is Kurdistan,” or settle for an unremarkable statement, confirming that they consider the HDP in line with the PKK, once the dust settles.

The opposition’s complaint that the ruling party itself oversaw the “opening” is utterly ineffective. First and foremost, such statements are extremely unlikely to make the Nationalist Movement Party (MHP) unhappy and drive a wedge between those two members of the People’s Alliance.

After all, the AK Party gets to criticize the HDP over its failure to distance itself from the PKK because it oversaw two “openings” and implemented reforms to address the Kurdish community’s identity-related demands. It also gets to point out that combating a terrorist entity is not the same thing as alienating the Kurds.

Moreover, Turkey created a very strong foundation for its fight against PKK terrorists by taking a series of steps in Syria and Iraq since 2015.

From the perspective of the People’s Alliance, the most critical issue is to decouple the HDP’s fate from the sensitivities of Kurdish voters. In other words, regardless of the court ruling on the HDP, the point is to subscribe to discourse and a set of policies that can get conservative Kurds to vote for the People’s Alliance.