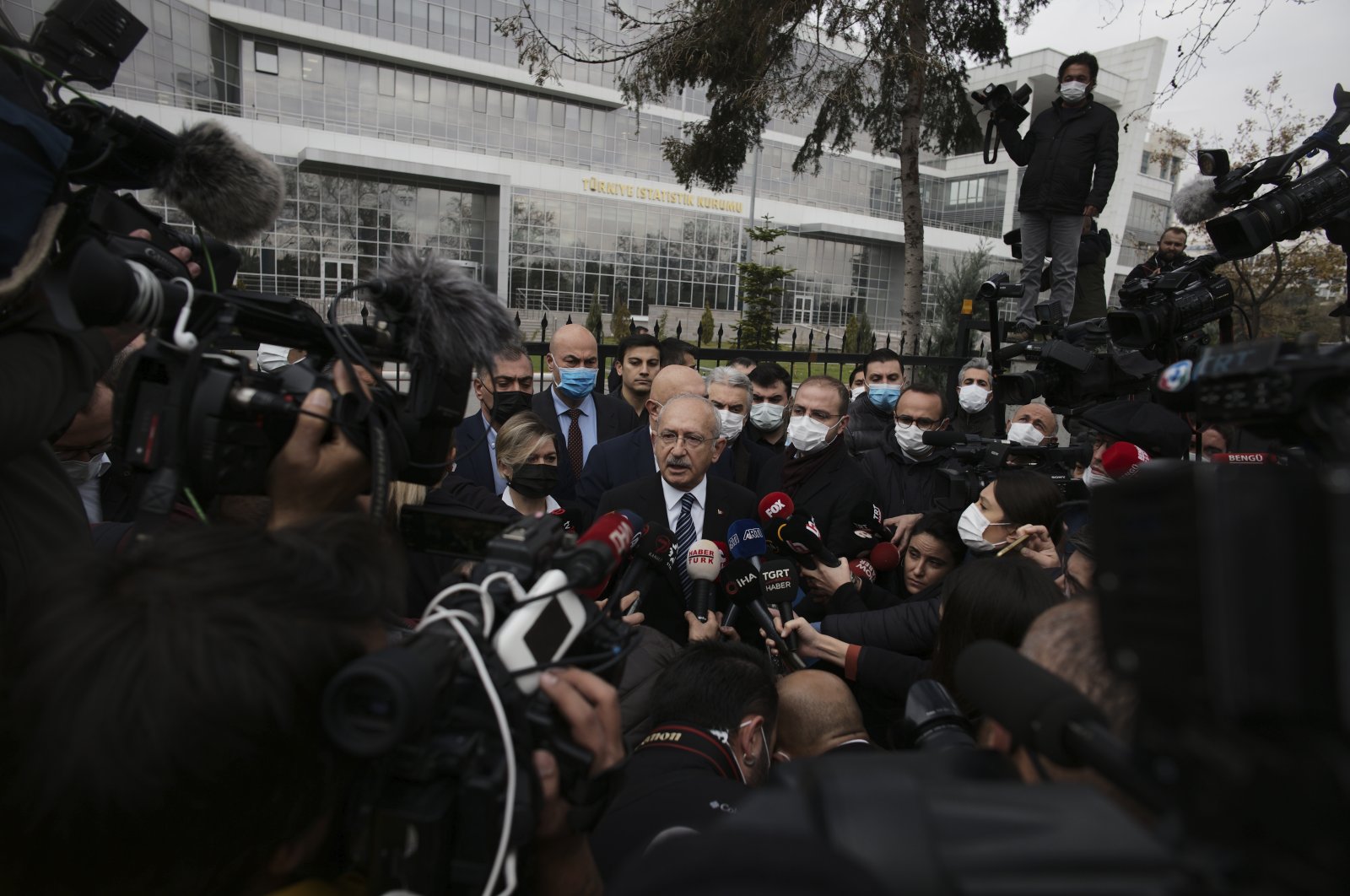 The chairperson of Turkey’s main opposition Republican People’s Party (CHP), Kemal Kılıçdaroğlu, showed up at the Turkish Statistical Institute (TurkStat) on the morning of Dec. 3 as the official agency published the latest inflation data, without an appointment. His remarks outside the building revealed that the opposition has started walking down a dangerous path. Last week’s events demonstrated that Kılıçdaroğlu was trying not to obtain information but to use a new tactic to target public institutions.

As his earlier visit to the Central Bank of the Republic of Turkey (CBRT) also showed, the CHP chairperson aims to mount pressure on institutions, which he labels as “the palace’s (a term used by the opposition with a negative connotation to the Presidential Complex in capital Ankara) agencies.” It is one thing to exploit inflation to fuel the political opposition; yet, Kılıçdaroğlu has been doing something quite different for some time. He promotes a dangerous type of populism among the opposition that directly targets public institutions. He also strives to intimidate civil servants by threatening the bureaucracy. His purpose, quite obviously, is to strike fear in the hearts of civil servants in order to stop public institutions from functioning properly.

What is the TurkStat data?

In this regard, CHP officials, who accused TurkStat of lying, went further than holding public officials accountable. The claim that “this is no longer a public institution” signals the opposition’s intention to start a witch hunt in the future. Ironically, the World Bank says that Turkey is among the top 20 performers out of 178 countries in terms of the performance of its statistical systems. Moreover, TurkStat data is subject to international monitoring. Despite those facts, the main opposition party may criticize that institution. Yet, its hostility toward public institutions, all in the name of opposing the “palace regime,” is manifested in a toxic language that undermines our democracy.

Here’s what Kılıçdaroğlu said about TurkStat: “Millions of laborers will get raises based on that fictional data. To stomach oppression is to give rise to even greater oppression. Do not forget that there is a Moses for every Pharaoh.” Telling religious voters that he intends to “make amends,” the main opposition leader thus uses very strong language, making references to oppression and pharaohs. Let us recall that he recently accused President Recep Tayyip Erdoğan’s supporters of being “false Muslims.”

Let’s describe the main opposition’s rhetoric as the average CHP supporter would: The main opposition party’s new language resorts to the “exploitation of religion.” The opposition used to criticize conservatives for saying that they were like Caliph Umar and equating their opponents with the Pharaoh. One cannot tell whether Kılıçdaroğlu’s new advisers, who used to work with the ruling Justice and Development Party (AK Party), thought this was a good idea. Yet the main opposition leader no longer just imitates the AK Party. He mixes religion with politics.

To make matters worse, it seems that the rapprochement between the CHP and the Peoples’ Democratic Party (HDP), which faces closure over its links to the PKK terrorist organization, was not limited to opposing military operations in Syria and Iraq. Instead, the main opposition party increasingly embraces the HDP’s tactics and harsh rhetoric. To nobody’s surprise, Hakkı Oluç, an HDP whip, endorsed Kılıçdaroğlu’s attempt to storm TurkStat by saying, “The palace regime has nothing to do with democracy anymore.”

That emerging partnership between the CHP and the HDP appears to be in sync with an earlier call by Selahattin Demirtaş, the former HDP chairperson who remains under arrest on terrorism charges, to “join together at public squares to overthrow Erdoğan.” It remains unclear, however, whether that move will lead to “building a common future together.” For the record, the HDP’s vision for Turkey’s future, too, is quite problematic.

For those, who do not share my views on the CHP embracing the HDP’s brand of political opposition, here’s another conclusion: Kılıçdaroğlu’s tone, tactics and rhetoric become increasingly similar to the CHP’s destructive brand of opposition in the 1950s.