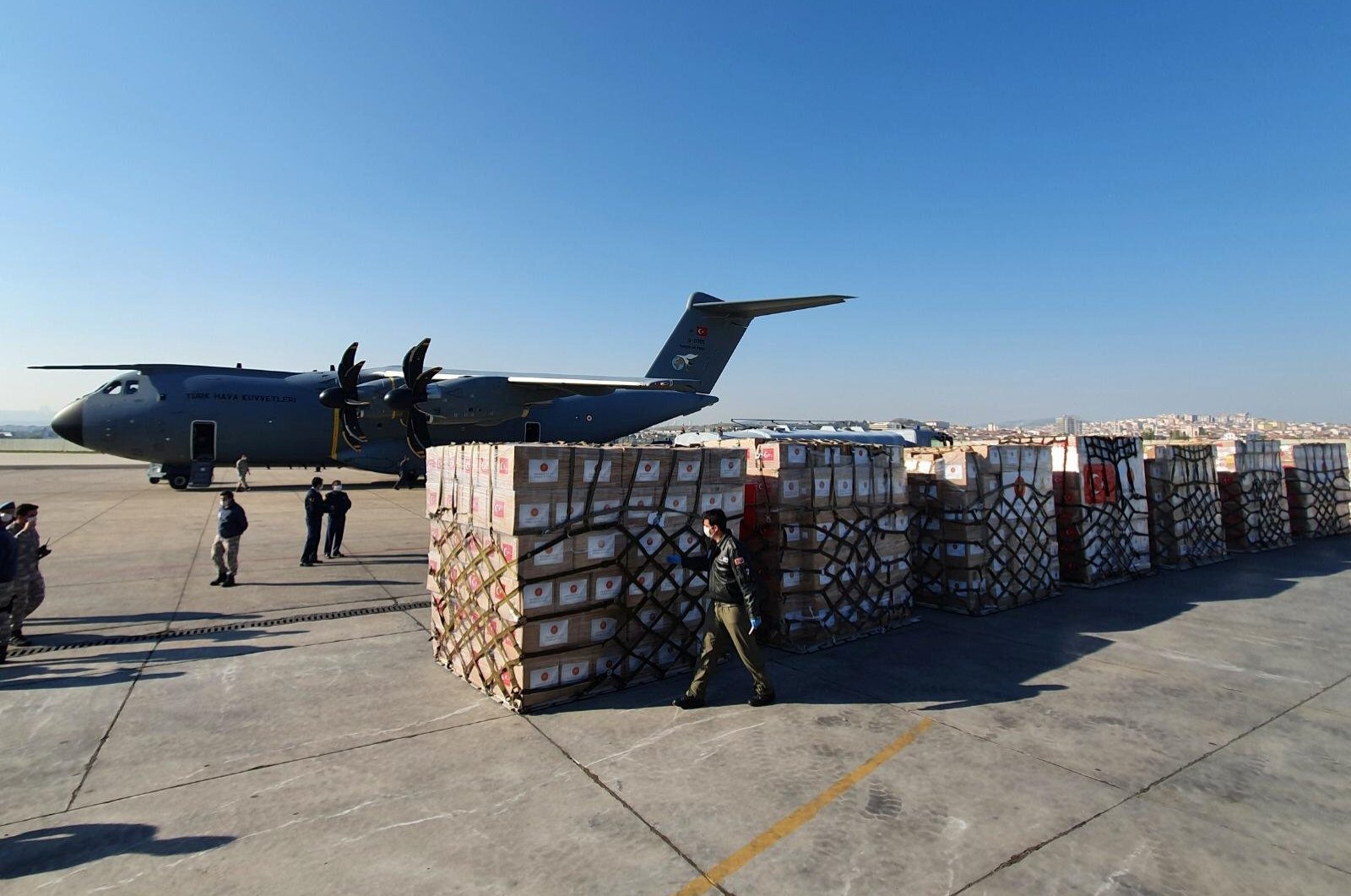 A shipment of medical supplies, part of a major aid campaign by Turkey which has dispatched supplies to dozens of countries since the coronavirus pandemic erupted, is lined up by a Turkish military cargo plane at Etimesgut airport before departing for the United States, Ankara, Turkey, April 28, 2020. (Reuters Photo)
by Hilal Kaplan May 15, 2020 12:05 am
RECOMMENDED

Although Turkey is ranked ninth in terms of the number of coronavirus cases, it continues on its path without stumbling in comparison with other countries on the list. Main factors in this outcome are its strong health care infrastructure, with a hospital occupancy rate not exceeding 60% even in April, when the pandemic hit its peak, its dynamic supply chain which has prevented a shortage of medical protective equipment, and its army of specialist health workers.

Turkey is also one of the pioneering countries in supplying health care equipment abroad during this global pandemic. A total of 116 countries, including developed countries such as China, the United States and Britain, have requested aid from Turkey, and Turkey has granted 44 of them protective medical equipment and disinfectants. In addition, with special permission, it has sold 116 respirators to Spain, where the export of the equipment in question is prohibited. The countries that last year debated whether Turkey belongs in NATO have seen that Turkey, which has helped Spain, Italy, Britain, the U.S. and others during the pandemic, is a true ally in hard times. Foreign Minister Mevlüt Çavuşoğlu explained this privilege granted to Spain, saying: “While all countries withdrew their Patriot air defense systems, Spain kept its Patriots in Adana. It gave Turkey the strongest support within NATO.”

In addition to Western European countries, Turkey has provided assistance to Serbia, Kosovo, Bosnia-Herzegovina, Montenegro, North Macedonia and Bulgaria in the Balkans. The tone of comments even about an issue of human health in the French and German media, which considers Turkey’s warm relations with Balkan countries as a threat, has not changed much. Media outlets such as Le Monde and Der Spiegel released analyses saying that Turkey takes advantage of the outbreak to boost its influence. While Germany and France could only manage to be self-sufficient, Turkey's helping hand to the Balkans apparently disturbed them.

What we are going through is not a threat that will remain within the borders of nation-states alone and will cross borders with a passport. What happens to our neighbors and even distant neighbors will be determinant as well as what happens on a national scale. Therefore, Turkey's aid diplomacy is both about being a foul-weather friend, as well as doing what is humane and rational while that may boost its soft power.

Another aspect of aid that is not frequently addressed is that Turkey has sent aid to Armenia, with which even borders are closed, and Israel, with which diplomatic relations have been minimized. Probably thanks to communication channels opened with this aid diplomacy, Israel did not sign the anti-Turkey declaration signed by Egypt, Greek Cyprus, Greece, the United Arab Emirates and France on May 12. The other non-signatory country was Italy, the country to which Turkey delivered the first medical aid.

Moreover, according to information leaked to the press from multiple sources, negotiations are underway between Turkey and Israel on a continental shelf agreement in the East Mediterranean. We will see if a global test like the coronavirus will bring consensus on a path that concerns the interests of the two countries.

In any case, it is possible to say that while, on one hand, Turkey is dealing with the coronavirus pandemic on a national scale, it is also consolidating its soft power through aid diplomacy in countries on three continents.