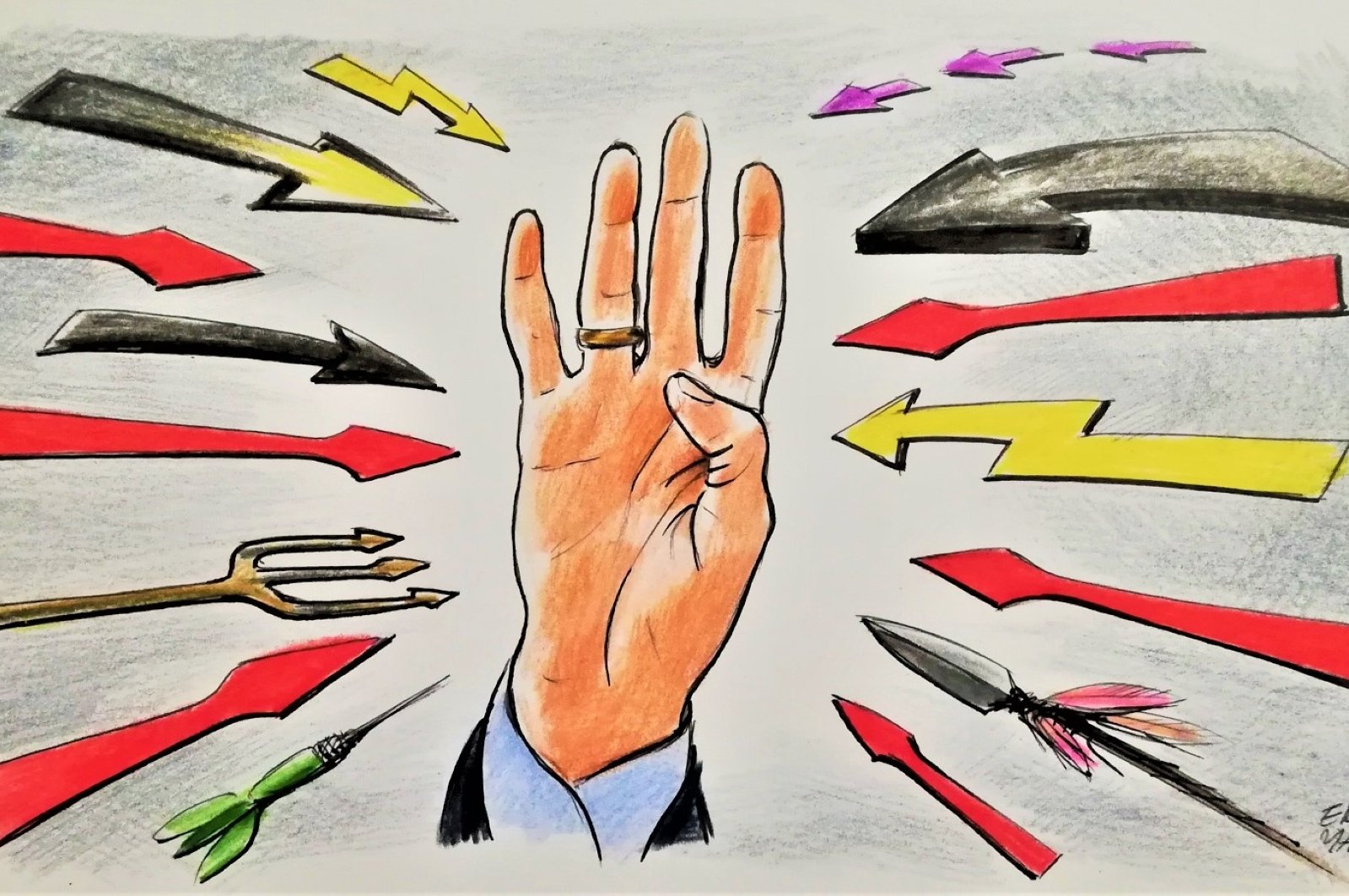 Illustration by Erhan Yalvaç
by Burhanettin Duran Feb 25, 2021 12:05 am
RECOMMENDED

The relationship between politics and family has always presented challenges to politicians with extended careers in Turkey.

Interestingly enough, that doesn't seem to be the case elsewhere in the world.

For example, it is not controversial for members of the same family to have political careers at the same time abroad.

The Bush, Clinton and Trump families immediately spring to mind.

By contrast, when family members of prominent politicians like Ismet Inönü, Adnan Menderes, Turgut Özal, Süleyman Demirel and Bülent Ecevit entered politics, they were criticized, even if their family member had already retired.

For the opposition, that issue served as a constant source of ammunition in their rhetoric.

It was only natural for members of President Recep Tayyip Erdoğan’s family, who views politics as a lifestyle to serve the cause of “Great Turkey,” to support that agenda.

Let us set aside the president’s service as a party chairperson and mayor. As prime minister and president, Erdoğan has assumed the highest level of responsibility for Turkey for 18 consecutive years.

It is not easy to be part of a family that was made to endure incarceration, domestic and international attacks on top of both overt and veiled coup attempts. That was the case in December 2013 and on July 15, 2016.

Whether one likes it or not, politics determines all aspects of one’s life. Being in the same family as a politician who has been in power for such a long time is a multifaceted challenge in itself.

In moments of crisis, in which politicians can be ruthlessly abandoned, the unfaltering support of one's family is a comforting reminder.

Members of Erdoğan’s family, too, offered him that unwavering support and served the same cause – sometimes by stepping out of political life altogether.

While Erdoğan’s family opted to carry out symbolic duties, entering philanthropy and the private sector, it was Berat Albayrak who pursued a political career. He served as minister of energy and then minister of the treasury and finance up until his resignation in November 2020.

Throughout his political career, Albayrak encountered many obstacles being the president’s son-in-law.

Obviously, that added challenge had nothing to do with adapting to the heavy workload of a leader or contributing to critical decisions.

That is merely the price of being part of a political cause. Becoming the target of harassment, insults and slander, by virtue of being Erdoğan’s son-in-law, however, was an unbearable weight to shoulder.

Addressing the ruling Justice and Development Party's (AK Party) provincial congress in Izmir, Erdoğan perfectly summarized the challenge: “The ultimate misfortune of (Albayrak) in performing his duties in the areas of energy and economy was that his title, son-in-law, took precedence over his experience, hard work and accomplishments. I believe that he would have been assessed more objectively, had he performed those tasks as an ordinary politician. Turkey’s most recent steps in the area of energy are rooted in the strategy that (Albayrak) devised during his tenure as minister. They flip out because he accomplished that. Berat Albayrak made his mark on some of our country’s greatest accomplishments.”

At the same time, it reflects helplessness and shock. For the record, they are not alone: Opposition parties, large and small, had come to consider criticizing the president’s family members, including his son-in-law, “political capital.”

But that argument tactic no longer works. Erdoğan has proved that he can successfully manage the departure of a family member from the political arena. All members of his family, including Albayrak, showed that they could shoulder the heavy burden of their cause.