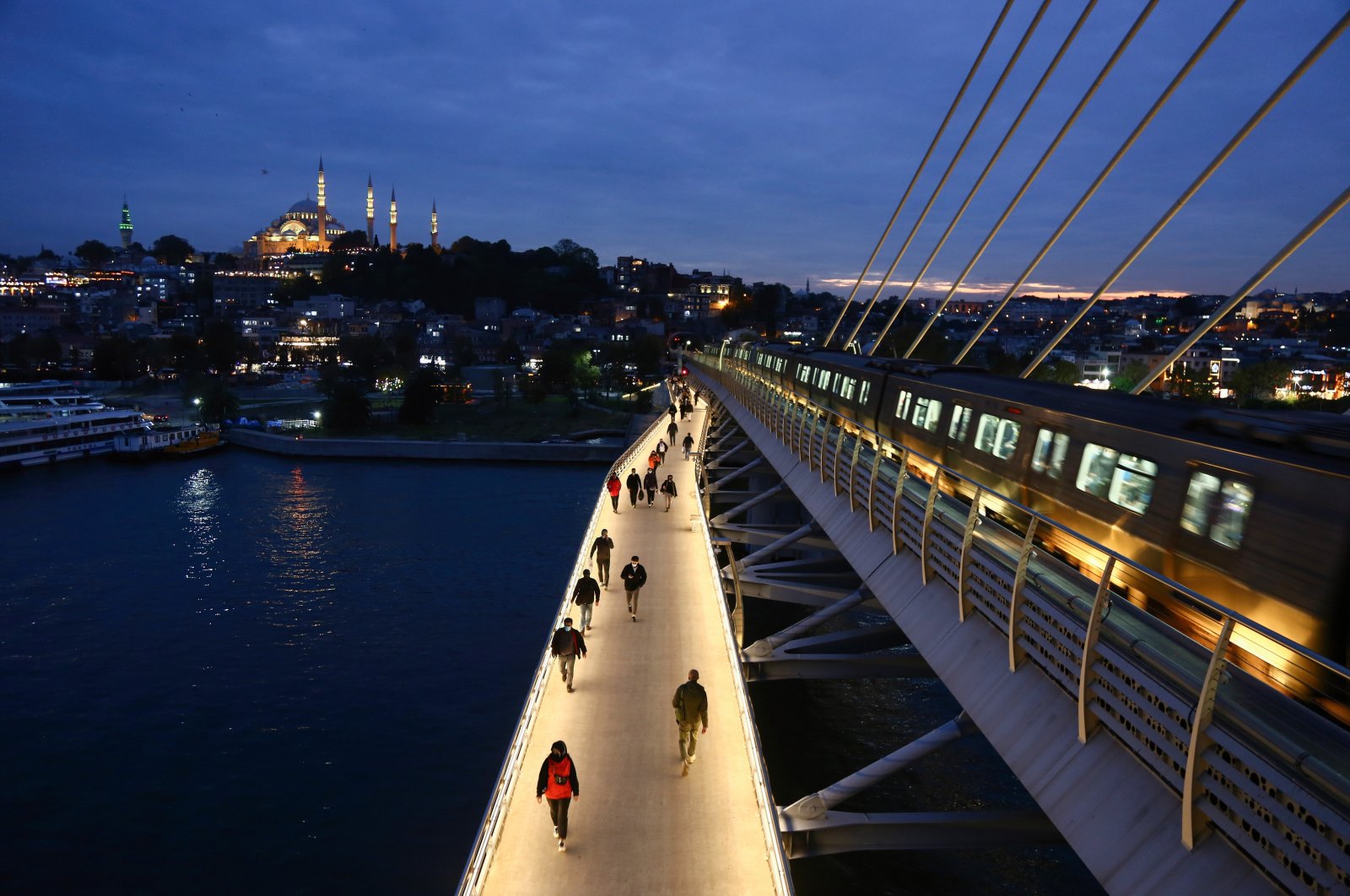 People are seen walking along the Golden Horn Metro bridge, with the Süleymaniye Mosque appearing in the background at sunset, Istanbul, Turkey, Oct. 3, 2021. (Photo by Getty Images)
by Ihsan Aktaş Oct 16, 2021 12:05 am
RECOMMENDED

The history of the Justice and Development Party's (AK Party) two-decade-long political rule might be summarized as an era of economic growth alongside political and technological development for Turkey. This era will also go down in history as one in which Turkey emerged as a regional power.

During the last two decades, the AK Party resolved Turkey’s infrastructural problems in the fields of transportation, education and health to a great extent. Its immense investments in infrastructure met the demands of urban living for housing, clean water, clean air and clean energy while a wide network of logistics was laid out throughout the country.

Apart from metropolises, AK Party governments established at least one university in each city while meeting their infrastructural needs. Currently, the overabundance of high-skilled university graduates has emerged as one of the unexpected problems for the country.

In the international arena, Turkey has emerged as a regional power. Adopting a multilateral and multidimensional foreign policy attitude, Turkey has become a key player that negotiates with great powers on an equal footing. In the Eastern Mediterranean, Libya, Karabakh and Syria, Turkey managed to assert its own terms at the risk of coming into conflict with great powers.

As a striking example, when the tension between France and Algeria escalated recently, French President Emmanuel Macron adopted a populist discourse, which made Turkey the scapegoat. Instead of officially apologizing for the atrocious crimes against humanity committed by the French colonial rule, President Macron not only praised their colonial past for founding the Algerian nation but also blamed the Ottomans as true invaders of Algeria. It is incredible how he manipulated the fact that the Algerian nation emerged after winning their war of independence against French colonization.

In the international arena, Turkey proved its worth by making use of both its hard and soft power. In the Eastern Mediterranean, Turkey succeeded in protecting its national interests against Greek violations, which were backed by Western powers. In Libya, Turkey emerged as a playmaker, which, by its unbending support for the U.N.-recognized Government of National Accord (GNA), turned the tide in favor of the democratic government by legitimizing it in the international arena. During the Nagorno-Karabakh war, Turkey’s sophisticated military support for Azerbaijan, when combined with its diplomatic relations with Russia, meant certain defeat for an aggressive Armenia. In Africa, the Balkans and the Caucasus, Turkey is seen as a key player that sides with oppressed nations.

On the other hand, the AK Party currently is finding it difficult to meet the new demands of people in politics and economics. While the AK Party leadership has begun to critically examine its two-decade-long political power, opposition parties have taken the role of expressing the demands of electors in democracy, rule of law, human rights, high cost of living, inequality of income, unemployment and so forth.

Turkey, after resolving its main problems within the country, has transformed into a regional power and is now beginning to compete with international players. The AK Party now faces the task of meeting the aforementioned demands of the people. This way, it will be able to reduce the wide angle between the two antagonistic views of Turkey.