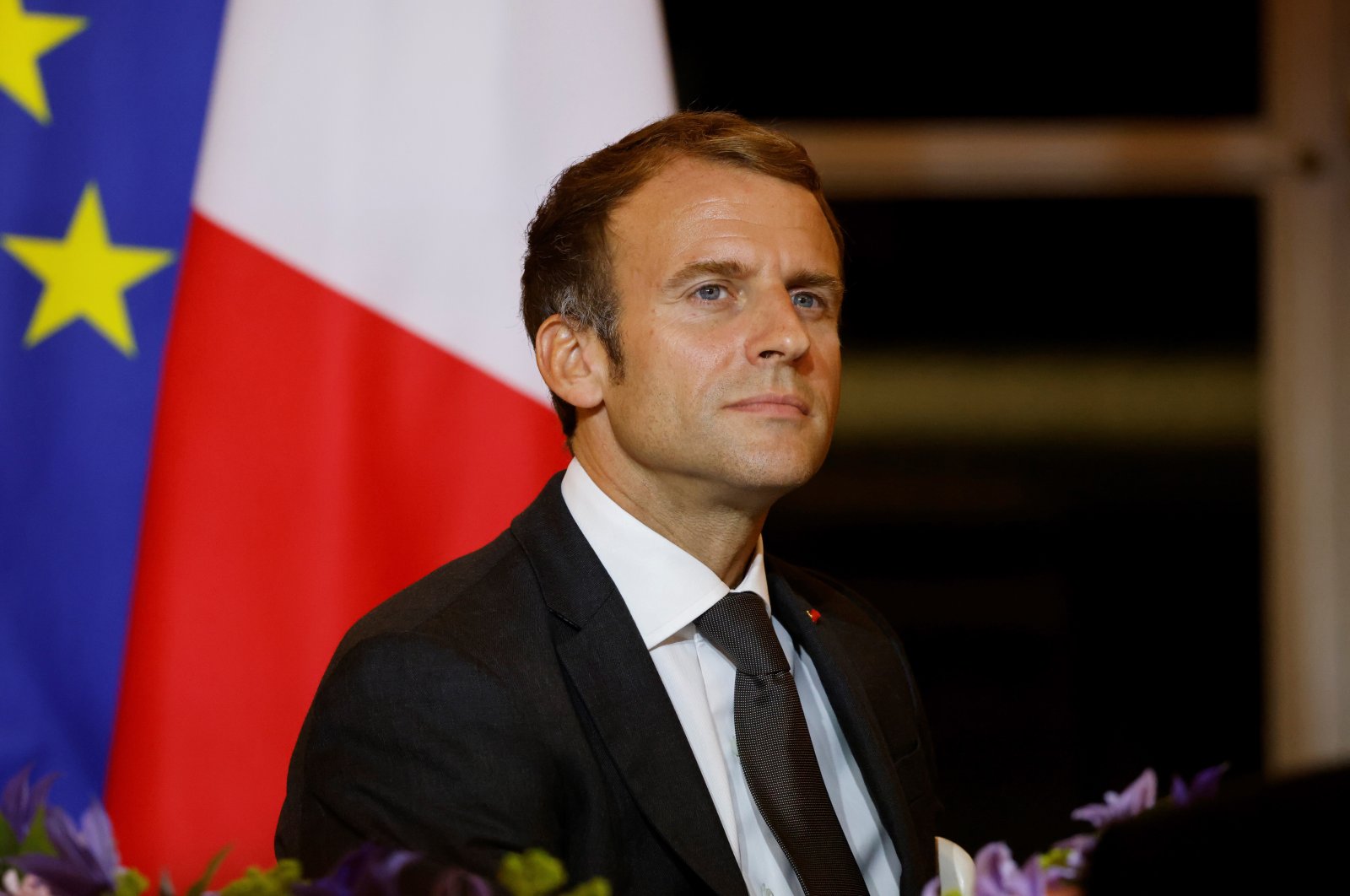 French President Emmanuel Macron reacts as he hosts a dinner at the Elysee Palace as part of the closing ceremony of the Africa2020 Season, which presented the views of the civil society from the African continent and its recent diaspora in different sectors of activity in Paris, France, Sept. 30, 2021.
by DAILY SABAH WITH AGENCIES Oct 02, 2021 6:21 pm

Following an ongoing row with Western allies U.S., U.K. and Australia over a canceled defense contract, France suffers yet another major foreign policy blow under Macron's rule, this time with Algeria over a controversial visa move and the president's even more controversial historical rant

In an apparent display of the souring relations between Algeria and France, Algiers withdrew its ambassador to Paris for consultations, state TV reported, in a move that followed French President Emmanuel Macron's decision to cut visas by half and controversial remarks on Algerian politics and history.

The North African country's decision came three days after the French ambassador to Algiers was summoned to the foreign miinistry to protest Paris' decision to reduce the number of visas granted to Algerian nationals. As the row was ongoing between France and Algeria, however, Macron added more fuel to the fire Thursday through a series of controversial remarks over the political situation in Algiers, minimizing his country's role in brutal colonization of the country and attempts to rewrite history.

On Thursday, Macron met with 18 young Algerians and French with Algerian roots at the Elysee Palace in the capital Paris. According to the transcript of the meeting released by French newspaper Le Monde on Saturday, Macron accused the political system in Algeria of being built on the trauma and tragedies of the past, namely inflicted during the French colonial rule and the brutal repression of the eight-year Algerian struggle for independence.

The French president went on to claim that the Algerian system was "tired," saying that the Hirak protest movement that began in 2019 further weakened it. He added that he has a good dialogue with President Abdelmedjid Tebboune, adding: "But I see that he is caught in a system that is very hard."

Since independence in 1962, the National Liberation Front (FLN), the leading pro-independence group with a strong emphasis on Arab and Algerian nationalism and anti-imperialism, has dominated Algerian politics along with the military. The country went through a civil war between state forces and extremist militias following the scrapped elections in late 1991. The political system was partially relaxed in the late 1990s and early 2000s during the presidency of Abdelaziz Bouteflika, who ruled the country for 20 years before resigning amid mass protests in April 2019. Bouteflika, already suffering from poor health throughout his final term, recently passed away in September at the age of 84. His successor was again from the country's ruling elite. Tebboune, a former minister and prime minister who assumed office in December 2019, saw protests gradually fading out with the COVID-19 pandemic. However, Algerians returned to streets in early 2021 and held protests for months, which prompted Tebboune to carry out a large-scale Cabinet reshuffle.

Following his swings, Macron went on to say that the recent visa cutback decision will target the Algerian ruling elite while assuring that there will be no impact on students or businesspeople. "If you don't cooperate to keep people in an irregular and dangerous situation away, we're not going to make your life easier," Macron was quoted as saying by Le Monde.

To further add to the woes of Algiers, relations with Rabat is are at an all time low as the two countries, already at odds over the Western Sahara conflict and regional competition, recently severed their diplomatic ties as Algeria accused Morocco of supporting separatists in the Kabylie region and implicating it of wildfires.

Whereas France is going through the worst crisis in decades in its relations with the U.S. and U.K. over the AUKUS defense pact with Australia, which prompted Canberra to cancel a submarine deal with a French company and ordering U.S. nuclear submarines instead. A fuming Paris witdhrew ambassadors from all three countries while accusing Washington, London and Canberra of "deceit."

France invaded Algeria, nominally under Ottoman suzereinty but enjoying a high degree of autonomy in practice, in 1830. Insurgency against French troops and colonialists lasted for nearly five decades, killing hundreds of thousands of locals in the process. Due to its proximity to the mainland, Paris sought to assimilate Algeria as an integral part of France with tens of thousands of settlers, who constituted up to one-fifth on the local population during the final years of the colonial rule. Calls for independence were raised right after World War II but were met with stiff rejection by the French, who were raging anti-independence wars in their colonies elsewhere in Africa and Indochina, where fighting culminated into the Vietnam War after the French defeat in 1954.

The same year, the FLN launched its armed independence campaign against French rule that lasted until 1962, making Algeria the last major French colony to become independent. In this violent period, more than 1 million Algerian civilians were killed and as many were injured, in addition to hundreds of thousands of casualties on the pro-independence militas and operatives. France suffered tens of thousands of military casualties. The political, economic and moral effects of the conflict also shook the country, which saw the Fourth Republic terminated by a military coup prompted by an Algeria-based junta, the return of World War II hero Charles de Gaulle to the helm with strong presidential powers and the defeat of a far-right leaning Algiers putsch in 1961, accelerating the decolonialization process.

Nearly a million people of European descent, known as Pieds-Noirs, fled to mainland France within months as the community suffered thousands of casualties. Tens of thousands of Harkis, Algeriians who were conscripted by the French during World War II and later during the Algerian War, were executed in revenge acts. Recently in September, Macron issued an official apology for "letting down" Harkis, which was met by rejection from Algiers.

Despite such a poor historical record, the French president claimed Thursday that the Algerian history has been "totally rewritten," accusing it of being "based on a hatred of France" rather than "truths."

"Was there an Algerian nation before French colonization?" the French president, already unapologetic for brutality in Algeria, asked.

He then suggests France to produce Arabic and Berber documents on Algerian history.

Macron than delves into his never-ending feud with Turkey, accusing the country of "disinformation" and "propaganda" that apparently have for worked Algerians.

Throughout their 300-years of influence in Algeria, Ottoman Turks greatly shaped the Algerian society and culture.

Following decades of French support for Armenian claims and recognition of 1915 events as "genocide," Turkey became more vocal about the French humanitarian record in history, accusing Paris of genocidal acts throughout its colonial rule.

Ankara and Paris are at odds over a number of issues, including Libya and Syria, French backing in initiatives targeting Turkey in the Mediterranean, active French support for Greece and the Greek Cypriot administration, and Macron's policies accused of being Islamophobic.

France on Tuesday had said it would sharply reduce the number of visas granted to people from Algeria, Morocco and Tunisia, accusing the former French colonies of not doing enough to allow illegal immigrants to return. Immigration is becoming a key campaign issue for the French presidential election set for April next year, with right-wing and far-right parties challenging the policies of centrist Macron, whose conduct is increasingly unpopular and candidacy remains in limbo.

Starting in a few weeks, the French government plans to slash the number of visas given to Algerians and Moroccans by half, and to Tunisians by 30%, according to government officials. All three countries were part of France’s colonial empire, and many Europe-bound migrants and other visitors coming from those North African nations have family or other ties in France.

French spokesperson Gabriel Attal told Europe-1 radio that France decided to take action because the Maghreb countries have refused recently to provide consular documents for their citizens being deported from France after arriving illegally. Virus travel restrictions have also complicated such return efforts.

A senior official in the French presidency said France notably wants North African countries to take back people flagged for extremism and expressed hope that a solution can be found soon. Attal said France has been trying to reach a diplomatic solution since it passed a tougher immigration law in 2018.

Between January and July, French judicial authorities ordered 7,731 Algerians to leave French territory because they didn’t have residency authorization but only 22 departed because many lacked the necessary documents from Algeria, Europe-1 reported.

Moroccan Foreign Minister Nasser Bourita said his country has issued 400 consular documents to Moroccans being expelled from France, but the number was limited because many of them refused to take a virus test, which is required to re-enter Morocco. That is "the problem of France, which must deal with it,” Bourita told a news conference in Rabat. He said Morocco is trying to seek "the necessary balance between facilitating the movement of people, whether students, businessmen and those wishing to benefit from medical services, and combating clandestine immigration.”

Tunisia took a more conciliatory public stance. President Kais Saied’s office said, "We are among countries that are cooperative in this domain, and we have excellent relations with France.”

Far-right presidential candidate Marine Le Pen gave qualified backing to the visa reduction but suggested that Macron's government waited too long before acting. Le Pen was Macron’s main rival in the 2017 election and is seen as his principal opponent if he runs again.

"For a long, long, long, long time, I have been asking that steps be taken to oblige certain countries to respect international law, ” she said, naming Algeria and Tunisia. "I am pleased that the president of the republic heard me. I find it’s a bit late."

Le Pen was speaking in Paris at a press conference about her plans, if elected, for a referendum on her proposals for a "drastic reduction” of immigration to France.