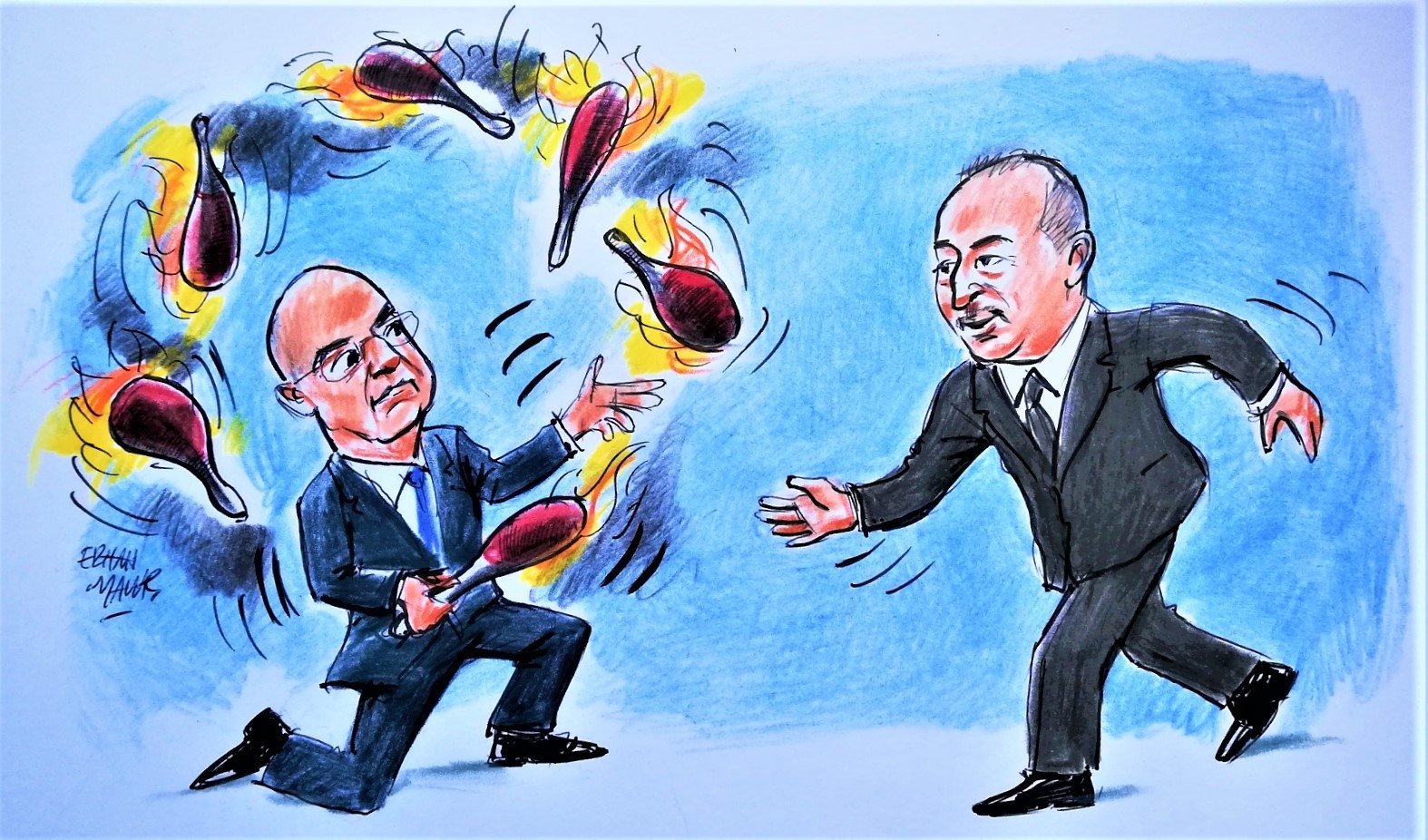 This illustration by Erhan Yalvaç shows Foreign Minister Mevlüt Çavuşoğlu (R) approaching his Greek counterpart Nikos Dendias, who is juggling, and criticizes the ongoing tension between Turkey and Greece.
by Talha Köse Jun 08, 2021 12:05 am
RECOMMENDED

Foreign Minister Mevlüt Çavusoğlu paid an official visit to Greece last week. The visit was part of efforts to reduce tensions between the two neighboring countries.

Turkey and Greece had a tense summer in 2020, mainly due to the disagreements in the Eastern Mediterranean. Close attention was paid to Çavuşoğlu's Athens visit after a heated summit between the two foreign ministers in Ankara in April.

Both the EU and NATO declared their support for diplomatic efforts to reduce tensions between Turkey and Greece.

The Greek press and public, however, criticized the Eastern Thrace leg of the Turkish foreign minister's visit, but diplomatic contacts and meetings in Athens were fruitful.

According to diplomatic sources, Çavusoğlu and his Greek counterpart Nikos Dendias sincerely communicated and discussed all the issues between the two countries.

Turkish and Greek diplomats agreed on 25 items and scheduled a meeting between President Recep Tayyip Erdoğan and Greek Prime Minister Kyriakos Mitsotakis in Brussels after the NATO summit.

The conciliatory gestures from both sides are promising, and such efforts have helped defuse the tensions between the two neighbors.

The overall atmosphere during the diplomatic exchanges in Athens was far more constructive than it was during the April meeting in Ankara.

Several agreements were also reached that will facilitate tourism and expand economic exchange.

The pandemic hit both Turkey and Greece's tourism industries and the deals in this field will help both sides. So far, it appears that there will be less tension between Turkey and Greece in the summer of 2021.

However, the significant disagreements between the two countries are still there and no significant progress has been made in those areas.

Critical debates will continue to be a source of potential tensions between the two neighbors. For instance, the Greek side did not back down from its claims related to expanding its territorial waters to 12 nautical miles.

The decision to increase Greece's territorial waters to 12 nautical miles in the Aegean Sea is still considered as "casus belli" (a legal term which, read in Turkish, carries the more than ironic duel meaning of "obvious spy") on the Turkish side.

Greece shows no intention to stop militarizing the Greek islands in the Aegean Sea, in clear violation of the 1923 Treaty of Lausanne.

After years of fruitless negotiations, the solutions based on a federal Cyprus are off the table. The Greek Cypriots and the Greek side insist on this formula, but it is no longer realistic under current conditions.

The Greek Cypriots and Greece continue to beg the EU to help resolve the Cyprus issue in their favor, but such an effort would be dysfunctional.

What is problematic in Turkish-Greek relations is that external actors shape the accord between the two neighbors.

Signals coming from the U.S. and the EU are critical in this context. Washington tries to balance Turkey and Egypt, the two countries that have the longest coast to the Eastern Mediterranean.

Supporting an alliance between Greece, Israel and the Greek Cypriots, while also incorporating the United Arab Emirates (UAE) and Saudi Arabia into the Greek-Israeli axis is a formula designed by Washington.

Washington empowers and encourages Athens by increasing its military infrastructure and providing new weapons. Washington also pushes other actors, including Egypt, Jordan and the UAE, to align further with Greece.

Even those actors are disturbed by Greece's maximalist attitudes. Washington gives political and military support to the Greek-Israeli axis to counterbalance Turkey and Egypt.

Still, a possible rapprochement and even strategic cooperation between Turkey and Egypt is a nightmare scenario for Washington's current Eastern Mediterranean strategy masterminds.

These efforts, put forth by U.S. and EU member countries, discourage Greece from engaging in genuine diplomatic exchanges in strategic files.

Regaining Turkey's trust and supporting the idea of Turkish-Greek and Turkish-Israeli rapprochement would have been a much more efficient strategy, rather than formulating unstable alliances and axes in the Eastern Mediterranean.

Some EU countries, especially France and Austria, also try to support Greece and the Greek Cypriots as part of their policy to limit Turkey's activism in the Eastern Mediterranean, North Africa and the Balkans.

Greece and the Greek Cypriots are instrumentalized for the strategic priorities of other EU member countries. Italy and France also try to limit Turkey's influence in the Eastern Mediterranean, especially in Libya.

Greece seems to fit all strategic designs that try to balance and constrain Turkey.

Unfortunately, all the aforementioned efforts serve neither Turkey nor Greece's interests. The third parties play a negative role in shaping the relations between the two neighbors.

Strengthening ties, rebuilding trust and expanding cooperation with NATO and the EU would serve both parties' long-term interests.

Greece may reconsider its involvement in plans that are implemented only to benefit the third parties.

Nobody expects a diplomatic breakthrough that would resolve all the problems between Turkey and Greece in the short term.

Still, a process of sustained dialogue and confidence-building may help create a new atmosphere for more genuine diplomatic efforts.

Making strategic calculations like a 19th-century diplomat to a great power will not be helpful for Greece, or Turkey.

New opportunities will emerge for Turkey and Greece if they can diplomatically resolve their problems. However, both sides, especially the Greek and the Greek Cypriots, were conditioned to be confrontational in their discourse with Turkey.

There is still a lot to be accomplished at the popular level as well.