Why I don't believe the US withdrawal from Afghanistan 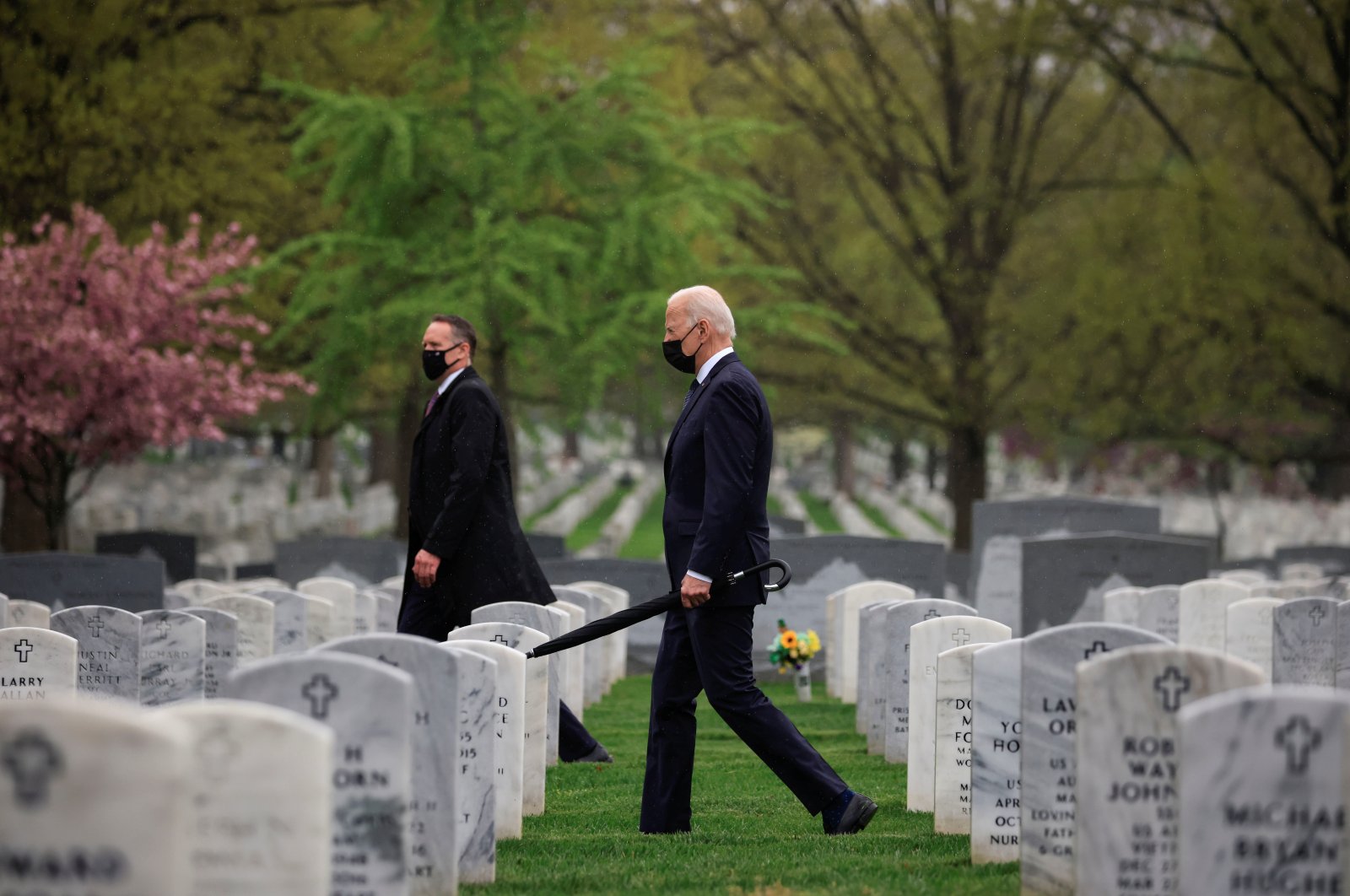 U.S. President Joe Biden carries an umbrella as he walks among graves in a visit to pay his respects to fallen veterans of the Afghan conflict, in Arlington National Cemetery in Arlington, Virginia, U.S., April 14, 2021. (Reuters Photo)
by Hakkı Öcal Apr 19, 2021 12:05 am
RECOMMENDED

I am going out on a limb again, but I will not simply reiterate what CNN analysts claim to be a worldwide trend: “disregarding American presidents and their big foreign policy pronouncements.”

The world has been listening to the U.S. claim that it is going to leave Afghanistan on a loop for a long time. This “endless war” – as shamelessly named by former U.S. President George W. Bush – has infringed upon the fabric of the Afghan social system that bore a remarkable civilization and the best cinema industry after the Soviets in the pre-Hollywood era, on the most rugged terrain on the face of the Earth.

The Afghan social system was the oldest tribal order in Asia and Afghan reformists educated in the West were able to create a unique amalgamation of the old and the new. They manage to establish a peaceful regime for the fiercest warriors of Asia.

Always a buffer state in the "great game" between British India and the Russian Empire, Afghanistan became free of foreign influence after 1919, following three major wars with the British.

Under the long rule of Amanullah Khan as a constitutional monarchy before later becoming a republic, Afghanistan was home to 14 ethnicities and 30 languages. The country boasted the highest ratio of educated girls in Asia and its health care system was universalized long before many nations even knew what "health care" meant.

However, the increase in the number of people educated in the neighboring Soviet Union, perhaps, resulted in too much of a good thing. In 1978, following a military coup, Afghanistan became a socialist state. It should have been called a Soviet satellite, like those in Eastern Europe, rather than a socialist state.

European-educated Afghan intellectuals and even those who attended schools in Moscow did not like this brand of Soviet socialism. Tribal leaders, in particular, did not approve of the land reform and Stalinesque purges of feudal landowners.

The internal fighting culminated in a full-scale Russian invasion: The Dec. 24, 1979, Soviet invasion of the country under the pretext of the Soviet-Afghan Friendship Treaty of 1978.

The British saw this as an excellent opportunity to return to the mountains from where they had previously been repelled following the Afghan War of Independence in 1919.

But the British were wiser this time. Then British Prime Minister Margaret Thatcher took then U.S. President Jimmy Carter with her when she rushed to help Afghanistan against the Soviet invasion.

Carter was more than willing to be dragged in. He said the Soviet invasion of Afghanistan was “the greatest threat to peace since the Second World War.”

Another lesson the British took away was only the Afghan people were capable of fighting on the knife-edge ridges of the Hindu Kush Mountains. The final hot battle of the Cold War would be fought by the Pashtun, Tajik, Hazara, Uzbeks and Turkmen.

However, American military historical scholars Frederick Kagan and Kimberly Kagan, later known as the creators of the term “the forever wars,” had a point: These stubborn tribal leaders could not go up against U.S. war tactics, and they may not be pleased to see the British return.

Their proposal was to create their own army to counter the invading Soviet forces and their Afghan infidel supporters. The British provided the solution: to disperse leaflets in Cairo and other Arab capitals to recruit a Muslim army comprised of “disaffected and disappointed young men who were not necessarily religious fanatics.”

There are several research papers exploring who gave the army the title of “mujahideen.” Some people believe it was William Casey, the new director of the Central Intelligence Agency (CIA), who had to foot the bill for the project.

Others believe the British Foreign Office came up with the name. Since the Ottomans limited the use of the word “jihad” only to “the struggle to become a better person” and used “Ghaza” or “Harb” instead, the Islamic world followed suit and the term “muharib” was used to define warriors/combatants for the next 400 years. A war to drive foreign occupiers out of a country is in no way holy; it should not be referred to as "jihad" nor should the warriors be called "mujahedeen."

Holy or not, the leaflets promised decent pay, a plentiful supply of U.S. arms, warm clothes to wear and a relatively easy war to win. After all, the warplanes would be doing all the work, the soldiers were simply required to take back the towns from the Ruskies.

The “disaffected and disappointed young men” would gladly join and fight for Osama bin Laden who had been elected leader of the crusade. His call was not based on theology, but was “elegant in its simplicity: It is populism at it most effective and most frightening” as Thomas Hegghammer, professor of political science at the University of Oslo, says. He fanned the flames of their national pain: Humiliation at the hand of the West.

Thus inadvertently, the West had created and armed the most ferocious anti-Western army: al-Qaida.

Al-Qaida as we know it

However, neither the commander nor the recruits were militarily astute and the war was anything but easy, lasting nearly 10 years. Two million people died and millions of refugees fled to Pakistan. It ruined the Soviet Union and soon the Berlin Wall crumbled.

Communist countries in Eastern Europe joined NATO while the recruits, the jobless and the hopeless Arab youth entrenched their rule in Afghanistan. They pushed aside the tribal chiefs and warlords and started running the country with the political party they created: the Taliban. Their British and U.S. masters quickly left the country after 10 years of tiresome war.

The masterminds of the war, Frederick and Kimberly Kagan, after successfully defending that Russia and China should not be allowed into Afghanistan as Pakistan remained silent about the monster it had created, busied themselves by creating an ideology inspired by the movement: Neo-Conservatism.

Some good did come out of the affair. The U.S. could now target the Taliban and al-Qaida instead of the Cold War's communists, declaring its new enemy: "Jihadism, radical Islam and Islamic terrorists."

Especially after the attacks of 9/11, a series of four coordinated terrorist attacks by al-Qaida against the United States, the neo-conservatives’ theory that Islam was endemically prone to terrorism and that the U.S. should fight it as it did with communism was embraced by the Bush administration with fervor.

A month after the deadliest terrorist attack in human history, the U.S. Congress passed the Authorization for Use of Military Force Against Terrorists, granting the president the authority to use all necessary force against those who “planned, authorized, committed or aided” the 9/11 attacks.

Consequently, on Oct. 7, the war in Afghanistan began when U.S. and British forces bombed the Taliban and al-Qaida camps as special forces invaded the country on the ground and overthrew the Taliban.

After 20 years of this “endless war” and four presidents down the line, the conflict in Afghanistan between the Taliban insurgency and the Afghan forces, now backed by a NATO Resolute Support Mission, continues to this day.

With Biden in office

Joe Biden was the fourth U.S. president to be elected amid the war and owes his victory to a coalition of liberals and the left that now wants what it is owed: To fix infrastructure and address income inequality and Obamacare among other things. These all require money. But money has been poured into Afghanistan as well as the corollaries of the Afghan War in Iraq and Syria.

The U.S.' infrastructure problems could be fixed four times over with that money, experts say. Former U.S. President Donald Trump allocated $800 billion to the military last year but warned that this would be the last huge budget the armed forces would receive.

This was during the "America First" period, and infrastructure, economy and business would get money. His speech was still on air when his secretary of defense resigned. Neocons rushed to their pens, denouncing Trump’s plan, explaining how “‘America First’ is only making the world worse.”

One of the authors of that Brookings article is the U.S. secretary of state. They explain why the U.S. should have a deterrence policy to support preventive diplomacy and why the U.S. should stay where it is. They say that “If the retreat from Syria announced by Trump proceeds, we will likely see the return of the Islamic State (Daesh) as well. Also, the dismemberment of Iraq and Syria and redrawing the Middle East map needs to have a sizable U.S. force in the area."

Over the last four years, the neocons have mentioned nothing of "retreat." NATO set a May 1 deadline for withdrawal, but the final conference on April 24 in Turkey “to jump-start efforts to end the war and sketch out a possible political settlement” may not take place.

Everything seems to have been postponed to September. As soon as the Biden-Harris co-presidency receives the support of the bipartisan majority for the social programs it is seeking, the military will heave a sigh of relief about this withdrawal nonsense.

This, in a nutshell, is why I respectfully decline to believe Mr. Biden's latest braggadocio.