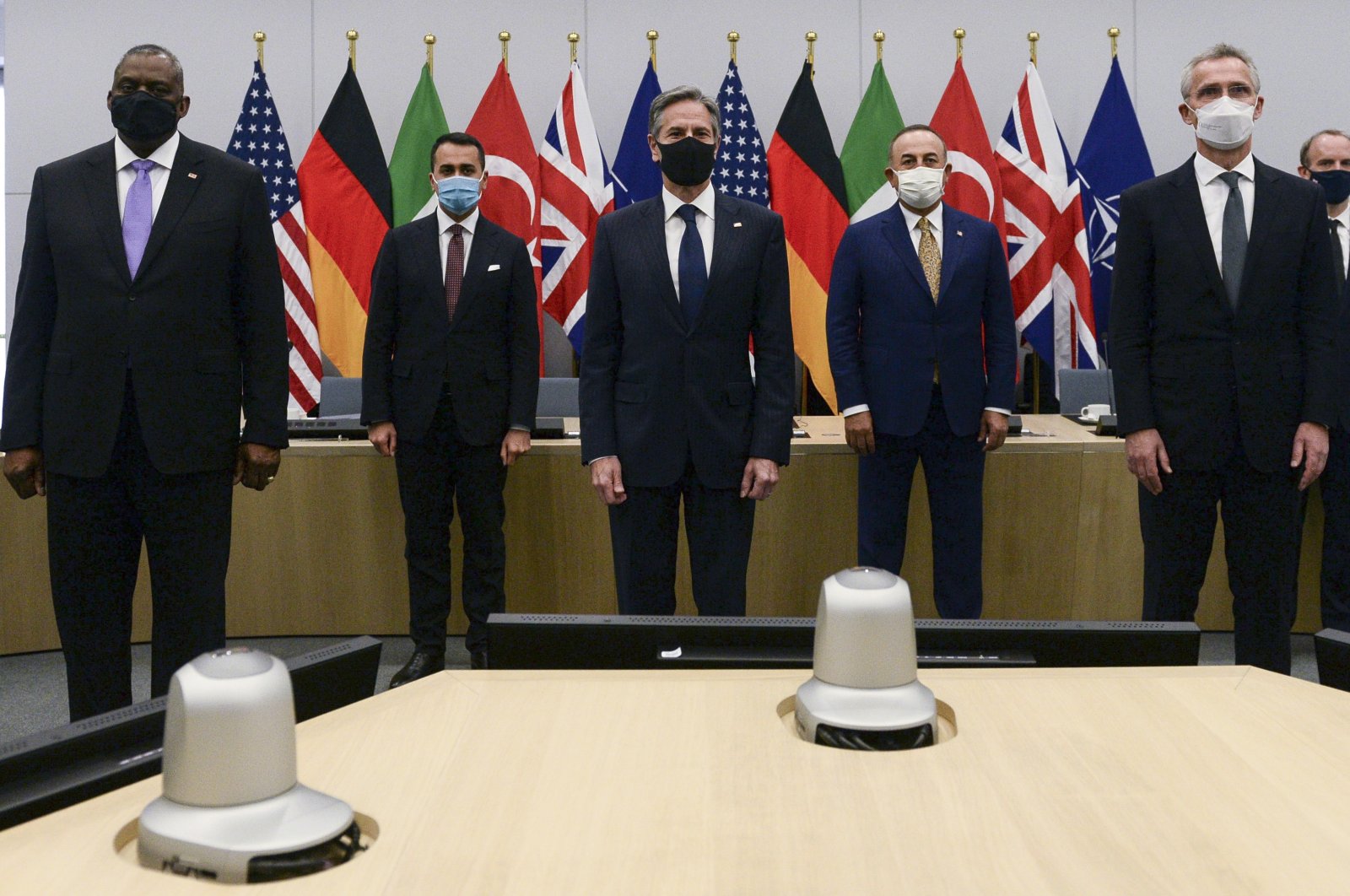 NATO member countries on Wednesday met in Brussels to coordinate the alliance’s withdrawal from Afghanistan, as the war-torn country’s peace talks are expected to resume in Istanbul later this month with Turkey’s mediator role.

U.S. President Joe Biden’s top national security aides were consulting with NATO for the withdrawal from Afghanistan with the planned pullout of American troops by the 20th anniversary of the Sept. 11 terrorist attacks.

Secretary of State Antony Blinken and Defense Secretary Lloyd Austin met senior officials from the alliance’s 30 members, including Turkey's Foreign Minister Mevlüt Çavuşoğlu, to discuss NATO’s future presence in Afghanistan in light of the announcement of the U.S. withdrawal.

Blinken said that he expected the allies to withdraw together but maintained that neither the U.S. nor NATO would abandon the country despite the impending pullout. There are roughly 7,000 NATO forces including Turkish troops still in Afghanistan in addition to the remaining 2,500 U.S. troops.

“Together, we went into Afghanistan to deal with those who attacked us and to make sure that Afghanistan would not again become a haven for terrorists who might attack any of us,” Blinken said. “And together, we have achieved the goals that we set out to achieve. And now it is time to bring our forces home.”

“We will work very closely together in the weeks and months ahead on a safe, deliberate and coordinated withdrawal of our forces from Afghanistan,” he said. He added that the mantra that has guided NATO’s Resolute Support mission has been “in together, adapt together and out together.”

The coalition operation in Afghanistan has a special resonance with NATO as its deployment marked the first time the alliance invoked its Article 5 mutual defense pact, which holds that an attack on one member is an attack on all.

Stoltenberg said that the meetings would be focused on "our future presence in Afghanistan” and that the alliance, which makes decisions on the basis of consensus, could be expected to make those plans known in the near future.

Even before the group meetings began, it appeared that consensus on joint withdrawal was at hand. German Defense Minister Annegret Kramp-Karrenbauer said NATO members were likely to decide to join the U.S. in pulling out their troops by Sept. 11.

“We have always said: We go in together, we go out together,” she told Germany’s ARD television. “I am in favor of an orderly withdrawal.” Germany, which currently has some 1,000 troops in Afghanistan, has always said that it would no longer be able to maintain a presence there if the U.S. were to leave.

Biden’s decision to withdraw troops from Afghanistan by fall defies a May 1 deadline for full withdrawal under a peace agreement the Trump administration reached with the Taliban last year, but it leaves no room for additional extensions. It sets a firm end to two decades of war that killed more than 2,200 U.S. troops, wounded 20,000 and cost as much as $1 trillion.

But the U.S.' withdrawal combined with the departure of NATO troops also risks many of the gains made in democracy, women’s rights and governance, while ensuring that the Taliban, who provided al-Qaida’s haven, remain strong and in control of large swaths of the country.

Blinken sought to address those concerns by saying that the withdrawal would not mean the end of America's or NATO's support for Afghanistan. “Even as we do that, our commitment to Afghanistan, to its future, will remain,” he said.

An administration official said Biden decided that the withdrawal deadline had to be absolute, rather than based on conditions on the ground. “We’re committing today to go to zero” U.S. forces by Sept. 11, and possibly well before, the official said, adding that Biden concluded that a conditioned withdrawal would be “a recipe for staying in Afghanistan forever.”

The president’s decision, however, risks retaliation by the Taliban on U.S. and Afghan forces, possibly escalating the 20-year war. Peace talks between the Afghan government and the Taliban are at a standstill but are expected to resume later this month in Turkey.

Most recently, Turkish Foreign Ministry sources said on Tuesday that the Afghan peace conference that was scheduled to take place in Istanbul on April 16 is now expected to be postponed to April 24.

In response to a question posed by Daily Sabah regarding the Taliban's latest announcement that it would not participate in the talks, the Foreign Ministry stated that they expect that the talks will be delayed and will likely be held on April 24.

The Taliban said on Tuesday they will not attend the summit on Afghanistan's future in Turkey this month until all foreign forces leave their country.

"Until all foreign forces completely withdraw from our homeland, (we) will not participate in any conference that shall make decisions about Afghanistan," tweeted Mohammad Naeem, spokesperson for the Taliban office in Qatar.

On the other hand, the Afghan government Sunday announced that a cohesive and unified peace strategy had been finalized ahead of the planned peace talks set to take place in Istanbul.

Last month, Blinken sent a letter to Afghanistan's President Ghani that stated Turkey would be asked to host a senior-level intra-Afghan peace meeting in the near future to finalize a peace agreement. Following the news, Turkey expressed its readiness to take part in mediation efforts to establish peace in Afghanistan and the region.

Ankara recently stated that Turkey will continue to support Afghan security. Turkey has been contributing to the security of Afghanistan and will keep its presence in the country as long as its Afghan brothers demand it, Foreign Minister Çavuşoğlu said last month, marking the 100th anniversary of diplomatic relations between the two countries.

Nearly 1,800 Afghan civilians were killed or wounded in the first three months of 2021 during fighting between government forces and Taliban insurgents despite efforts to find peace, the U.N. said in a new finding on Wednesday.

In a February 2020 agreement with the Trump administration, the Taliban agreed to halt attacks and hold peace talks with the Afghan government, in exchange for a U.S. commitment to a complete withdrawal by May 2021.

Over the past year, U.S. military commanders and defense officials have said that attacks on U.S. troops have largely paused but that Taliban attacks on the Afghans increased. Commanders have argued that the Taliban have failed to meet the conditions of the peace agreement by continuing attacks on the Afghans and failing to cut ties with al-Qaida and other extremist groups.

Later in Wednesday, Russia's foreign ministry also said that the U.S. plan to withdraw troops from Afghanistan by Sept. 11 violated an agreement with the Taliban and could lead to an escalation.