A year after the war in the South Caucasus 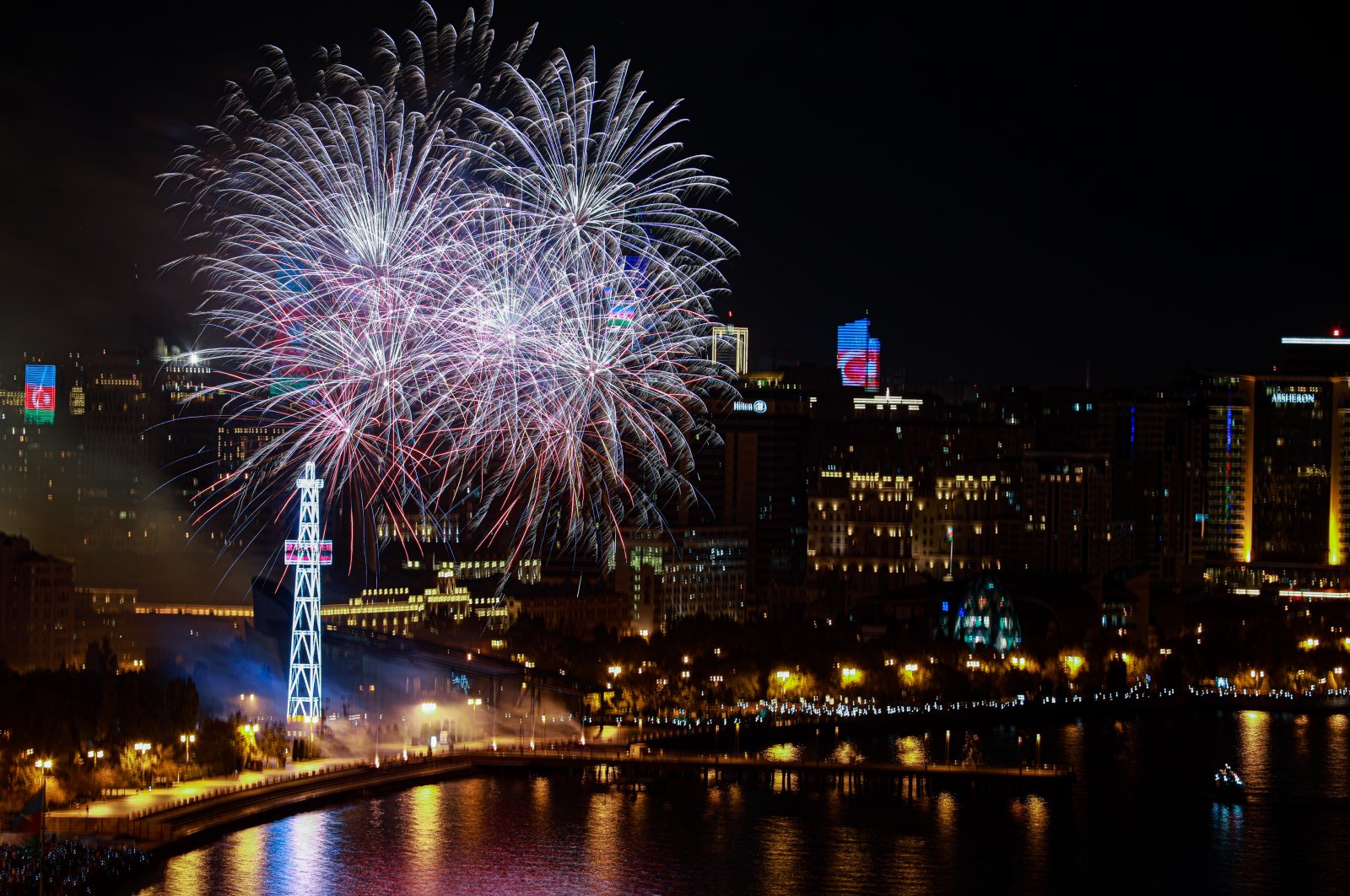 Fireworks go off during a procession marking the anniversary of the end of Armenia's occupation of the Nagorno-Karabakh breakaway region, Baku, Azerbaijan, Nov. 8, 2021. (Photo by Getty Images)
by Cavid Veliyev Nov 23, 2021 12:05 am
RECOMMENDED

It has now been a year since the Second Karabakh War in the South Caucasus region, and we can see that tensions between the parties have decreased significantly in this period. Beginning on Nov. 9, Armenia engaged in provocations that raised the military and diplomatic tension in the South Caucasus. However, if the conditions of the triple declaration signed on Nov. 10, 2020, had been fulfilled, this would not have happened.

Thus, following the Second Karabakh War, and in line with the declaration signed, the possibility of renewed peace and cooperation in the region has emerged despite the deep disagreements on some issues. The conditions of the tripartite declaration have been 50% met. The issues listed in the declaration still waiting to be fulfilled are the disarmament of armed Armenians in the Karabakh region of Azerbaijan that is under the temporary control of Russian peacekeepers, the opening of regional transportation lines and the return of those displaced as a result of the war. However, negotiations are ongoing on all three issues.

After the war, in addition to signing the final peace agreement, there are still steps to be taken to ensure normalization and cooperation in the region. These steps include the implementation of the conditions of the tripartite declaration; the opening of regional transportation lines; the demarcation and delimitation of the borders between Azerbaijan and Armenia; the normalization of Turkey-Armenia relations; and the establishment of a regional platform.

According to Article 9 of the declaration, it was foreseen that transportation routes should be opened between the parties. During the first Karabakh war, the transportation links in the region were shut down and remained so for the next 30 years. Armenia remained outside the regional transport network while it continued to occupy the Azerbaijani territories. On Jan. 11, 2021, a tripartite commission was established at the level of the deputy prime ministers of Azerbaijan, Armenia and Russia to negotiate the reopening of regional transportation links between the parties. The commission started negotiations on March 1. Although the commission stopped meeting before the general elections held in Armenia on June 20, the process was not halted and continued bilaterally, mediated by Russia. In fact, in May, when the tension between Azerbaijan and Armenia reached its highest level because of the preelection domestic struggle in Armenia, Armenia leased the land required for the Zangezur corridor to Russia.

The Azerbaijani, Russian, Turkish and Armenian governments all adopted a positive stance on the construction of the road. For Azerbaijan, this route will connect it to Nakhchivan and through it, Turkey. For Turkey, it means connecting with Azerbaijan via rail and road. For Russia, it will prevent outside intervention by nonregional states, especially those with an interest in Armenia, and maintain Armenia’s dependence on Russia. For Armenia, it will mean the end of regional isolation. Speaking at the Commonwealth of Independent States (CIS) Summit on Oct. 15, 2021, Armenian Prime Minister Nikol Pashinian said that the opening of regional transportation links is better than remaining in isolation for another 30 years. Therefore this road, which will facilitate transportation connections for Armenia with its neighbor Turkey and ally Russia, could be a positive development for the country.

Meanwhile, another aspect of the importance of regional transportation routes is the possibility of increasing cooperation and trade between the states of the region, as well as eliminating the possibility of war. If trade develops and cooperation occurs, it will weaken the position of those who support war as well as the continuation of hostilities in the region’s countries. As a result, the position of those who favor cooperation will be strengthened.

However, not all actors support the construction of the Zangezur corridor. The greatest reservations regarding this were expressed by the European Union and Iran. The EU has allocated funds for the construction of the most difficult part of the North-South Corridor, seen as a rival of the Zangezur corridor. In fact, the North-South Corridor has been under construction since 2012, but it remained incomplete due to a lack of financial support. The EU’s help came amid the project’s financial woes. Meanwhile, Iran considers the Zangezur corridor, on the one hand, an obstacle to the North-South Corridor and, on the other, as cutting its connection with its ally Armenia in the South Caucasus. In fact, although Azerbaijani President Ilham Aliyev announced several times that Iran could also benefit from the corridor, the Iranian side did not take it into account.

A second issue that will ensure peace and cooperation in the region is the delimitation and demarcation of the borders between Armenia and Azerbaijan. Although there were borders between the two countries during the Soviet period, there were no clear lines because the two states were members of the same union. Nevertheless, although there are administrative border maps from that period, the borders have not been demarcated because the Azerbaijani border territories were under Armenian occupation for 30 years. After the Second Karabakh War, the sides have returned to the Soviet-era borders. Now those borders need to be formalized. The parties are ready to cooperate on the clarification of the borders, but this is a long process that may take a decade.

The establishment of Turkish-Armenian diplomatic relations, and at the same time the opening of borders, is one of the most important steps toward regional cooperation. The borders between Turkey and Armenia were closed 30 years ago owing to the Armenian occupation of Azerbaijani territories. Now, after the recent war, that reason has disappeared. Following the war between the two countries, positive dialogue has commenced. Pashinian sent a message through the Georgian prime minister that he wanted to meet with President Recep Tayyip Erdoğan, who, in turn, stated that Turkey will respond if Armenia takes positive steps. In fact, if the Azerbaijan-Nakhichevan-Turkey corridor is established, the Turkey-Armenia railway can also be opened.

To sum up, although some steps have been taken for regional cooperation in the last year, the necessary conditions for peace have not yet been realized. Currently, the negotiation process is continuing on these issues, but some domestic political groups in Armenia and nonregional third actors, including the Minsk Group’s other two states, the United States and France, are displeased by the process. In order to see an end to opposition that could bring about a new regional war, the conditions for regional cooperation should be implemented within a relatively short period.