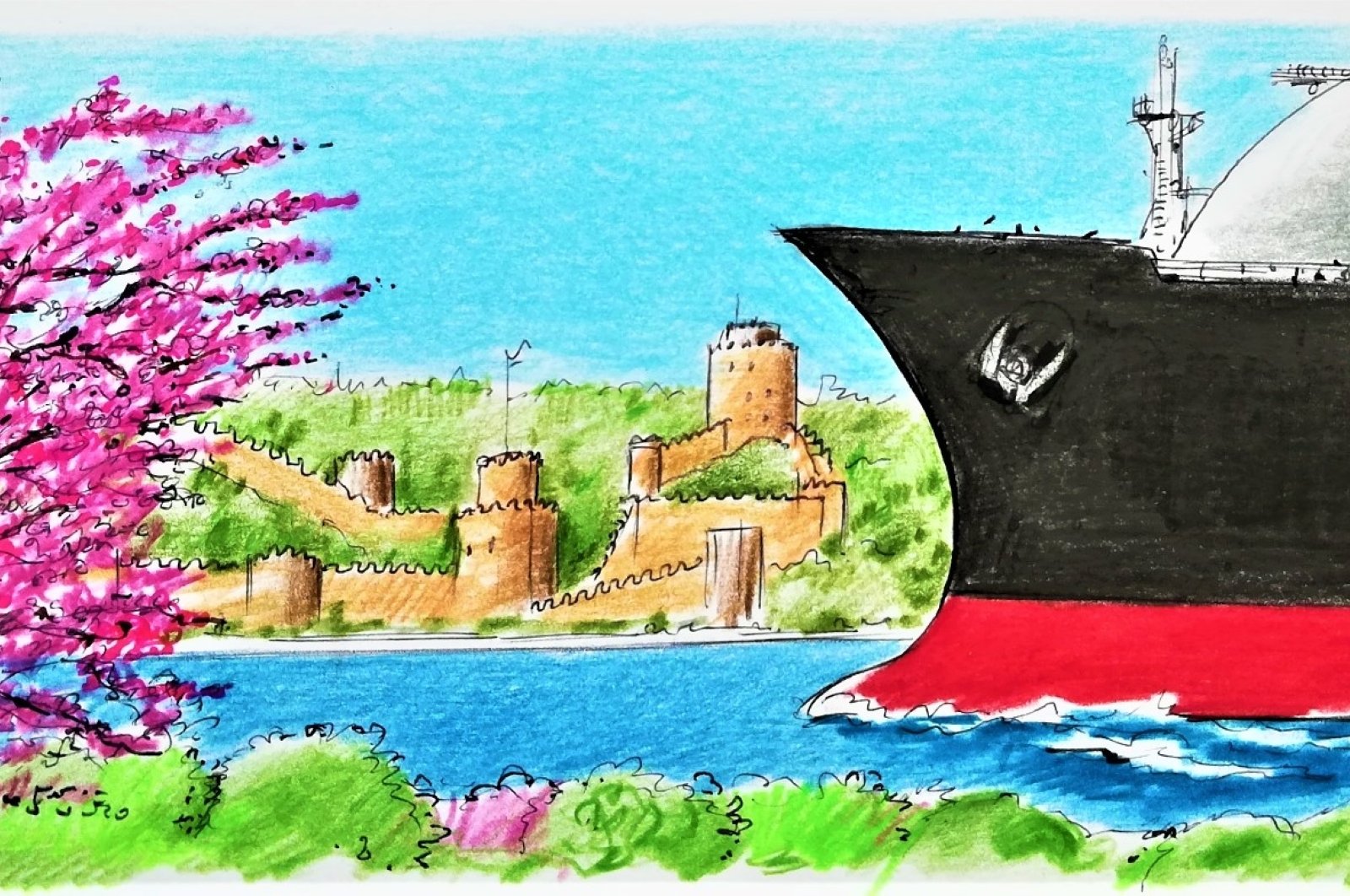 Illustration by Erhan Yalvaç shows a ship passing through the Bosporus as Rumeli Hisarı, an Ottoman-era fortress, is seen background on the European side of Turkey's metropolis Istanbul.
by Mehmet Emin Birpınar Jun 07, 2021 8:57 am
RECOMMENDED

According to the International Chamber of Shipping (ICS) data, about 80%-90% of trade on a global scale is done via sea lanes. From a financial point of view, 60%-70% of the annual economic value of $30 trillion (TL 260 trillion) is realized over the sea.

Within this freight, there is a considerable amount of petroleum, petroleum derivatives and other chemicals that have exponentially increased over the years.

The most supportive factor in the development of trade was undoubtedly the development of the maritime fleet. While the shipping fleet was 320 million deadweight tonnage (DWT) in the 1970s, this value increased sixfold to reach 1.98 billion DWT at the beginning of 2019.

According to the evaluations of the World Shipping Council (WSC), ship transportation is the most effective and efficient way of transporting goods and products in terms of costs, efficiency and environmental issues.

One of the large cargo ships can transport 200,000 containers of goods in a period of one year. That number of containers would require a 77-kilometer-long (49-mile-long) train or hundreds of trucks.

Another advantage offered by sea transport is economic gains as it minimizes transportation costs.

In this regard, according to the evaluations of the WSC, the cost of transporting 1 pound (0.45 kilograms) of cargo is $1.50 by plane, 10 cents by truck, 1 cent by rail, while this value is only 0.5 cents for waterway transportation.

Sea transport is a greener option. In our world, where 8 million people die every year from air pollution, the effects of climate change are becoming more prevalent every day. This form of transportation also has a positive environmental impact with fewer pollutants and greenhouse gas emissions.

Besides, the fact that sea transportation is cheap and offers safer navigation makes this option more attractive than other alternatives.

This necessitated the perpetuation of waterway transport and encouraged people to build artificial waterways in areas where natural waterways were not available.

Since the canals provide countries shorter routes, they make transportation more attractive on the one hand, and on the other hand, they have become the main income source of the countries they are located in.

For example, while the Suez Canal, which was recently in the headlines due to the Ever Given container ship, is the third-largest revenue producer in the Egyptian economy, the Panama Canal provides a great service that accounts for 12% of Panama's gross domestic product (GDP).

Istanbul is a metropolis with a history of 3,000 years and a population of more than 16 million. It is a unique city with its cultural and historical beauty, with the Bosporus passing through its coasts.

The strategic importance of the Turkish Straits system, consisting of the Istanbul and Çanakkale straits and the Marmara Sea, as the only waterway connecting the Black Sea to the Mediterranean, is indisputable.

The Turkish Straits are of vital importance for the economy and military security of the Black Sea littoral countries, as well as for Turkey.

The Bosporus hosts an average of 43,000 cargo ships per year. In addition, it is a highly trafficked strait, which hosts a total of 2,000 daily crossings consisting of daily inner-city lines and small fishing boats used for the transportation of approximately 500,000 people.

The Bosporus is a natural water passageway with a length of 30 kilometers, and its narrowest point is 698 meters (2,290 feet). It connects the Mediterranean, Aegean and Marmara seas to the Black Sea.

The Bosporus is considered one of the most difficult and most important natural and narrow waterways to cruise in the world. This is because of:

The traffic, which is not an issue in the open seas, can invite accidents due to varying reasons every day, especially in the straits.

Over 40,000 ships pass annually, of which 9,000 are tankers. The increase in ship lengths is pushing the Bosporus' capacity due to the increase in the amount of cargo carried.

Tankers carrying dangerous goods make up 20% of the ships that pass through Istanbul.

Global developments in the petrochemical sector have triggered the trade of dangerous goods in this direction and caused an increase in the dangerous chemicals carried.

In this respect, there was a 20% increase in the number of tankers carrying chemical cargo only in the 2016-2018 period.

Passages through the straits were determined by the Montreux Convention signed in 1936, and trade ships were given the freedom of passage.

Also, the agreement leaves the right to choose if they will take security measures regarding the ships.

However, at that time, while ship crossings numbered 4,000 per year, dangerous goods, especially oil, were prohibited.

Today, the number of ships has increased more than 10 times, the length of the ships has more than doubled, and the dangerous goods transported by ships have reached hundreds of millions of tons.

However, as a result of global climate change, serious changes have been seen in weather conditions, which has put the strait passages in a very difficult position.

All these developments have led to many accidents. The Independenta tanker accident, which was loaded with 95,000 tons of oil in 1979, is just one of them.

The explosion that occurred as a result of the accident caused the death of 43 people, extensively damaged the surrounding structures, and the fire broke out as a result lasted for two months.

Turkish seas would not be able to recover from these negative effects for years. The financial loss in the straits, where dozens of major and minor accidents occur every year, has so far exceeded $1.3 billion.

Turkey has taken many steps and developed legislation to prevent the damage that may be caused by these transitions, which are becoming more dangerous with each passing day.

Significant improvements have been achieved in ship traffic services. In addition, one of the important measures taken was the prohibition of night passages of tankers larger than 200 meters.

In addition, the waiting period, set as 48 hours, was adjusted to meet the needs and to ease the traffic; likewise, the passages were increased to seven days.

The inner-city ferry traffic and the movements of hundreds of fishing boats in the Bosporus connecting both sides also create separate traffic.

All of these issues cause heavy traffic, delays in transit and the loss of millions of dollars to company owners.

According to the data of the Ministry of Transportation and Infrastructure, there is an average of 14 hours of waiting time for each normal ship transit and 30 hours for each ship carrying dangerous goods, and this waiting time creates an additional cost of approximately $120,000 per day for the ships in transit.

Yet, all these measures do not make it possible to completely control maritime transport.

In this context, the implementation of the Kanal Istanbul Project is of great importance to secure the Bosporus, which is a complete mosaic of history and culture, and the heart of Istanbul.

Kanal Istanbul is designed to prevent the risks posed by transport via the Bosporus.

In this context, there will be slipways every 5 kilometers. There will be no sharp turns like in the strait. Transition conditions and rules will be determined entirely by Turkey.

Safety-enhancing issues such as captains and tugboats will be respected, which will reduce insurance costs for insurance agents and transit ships.

The necessary lighting will be provided even in times of heavy fog, preventing the interruption of the transitions.

Thus, waiting times will be eliminated as much as possible. In short, it will be ensured that the ships pass in a comfortable, convenient and safe manner.

By keeping the technological infrastructure strong, many ship tracking systems resembling an autonomous system will be installed. In short, it will offer a service with highway standards.

Just as Turkish people prefer highways for safety and comfort despite the tolls, ships sailing on the seas will prefer to pass through the canal rather than the strait, which presents a risky passage.

The model of the canal was carried out after drilling, laboratory and ground surveys spanning over 17,000 meters at 304 points.

The planned canal is expected to have a length of 45 kilometers, a depth of 20.75 meters and a bottom width of 275 meters.

In the light of these dimensions, it will be possible for giant ships in the category of extra-large ships to pass through the canal with a length of 350 meters and 145,000 DWT.

With the depth and width of Kanal Istanbul, features such as the boatyards located within 5 kilometers make it a safer option.

The canal will pass through settlements that resemble Kiel in Germany.

New cities will be established for the population living in risky areas on the right and left sides of the canal. The path will be cleared for the uninterrupted execution of communication, transportation and infrastructure services.

Many structures such as wastewater collectors, bridges, underpasses, etc. will be built.

It is obvious that the more world trade develops, the more the maritime sector grows. Maritime activities and revenues in many developed countries contribute greatly to the economy.

Turkey has also shown its growth in the maritime field in recent years and will crown it with the new canal to be built.

This step taken by our country will not only save the pearl of the world, the Bosporus, but will also be an indicator of our country's ability to effectively use its geopolitical and geostrategic position, and will make a great contribution to our country in economic and social terms.