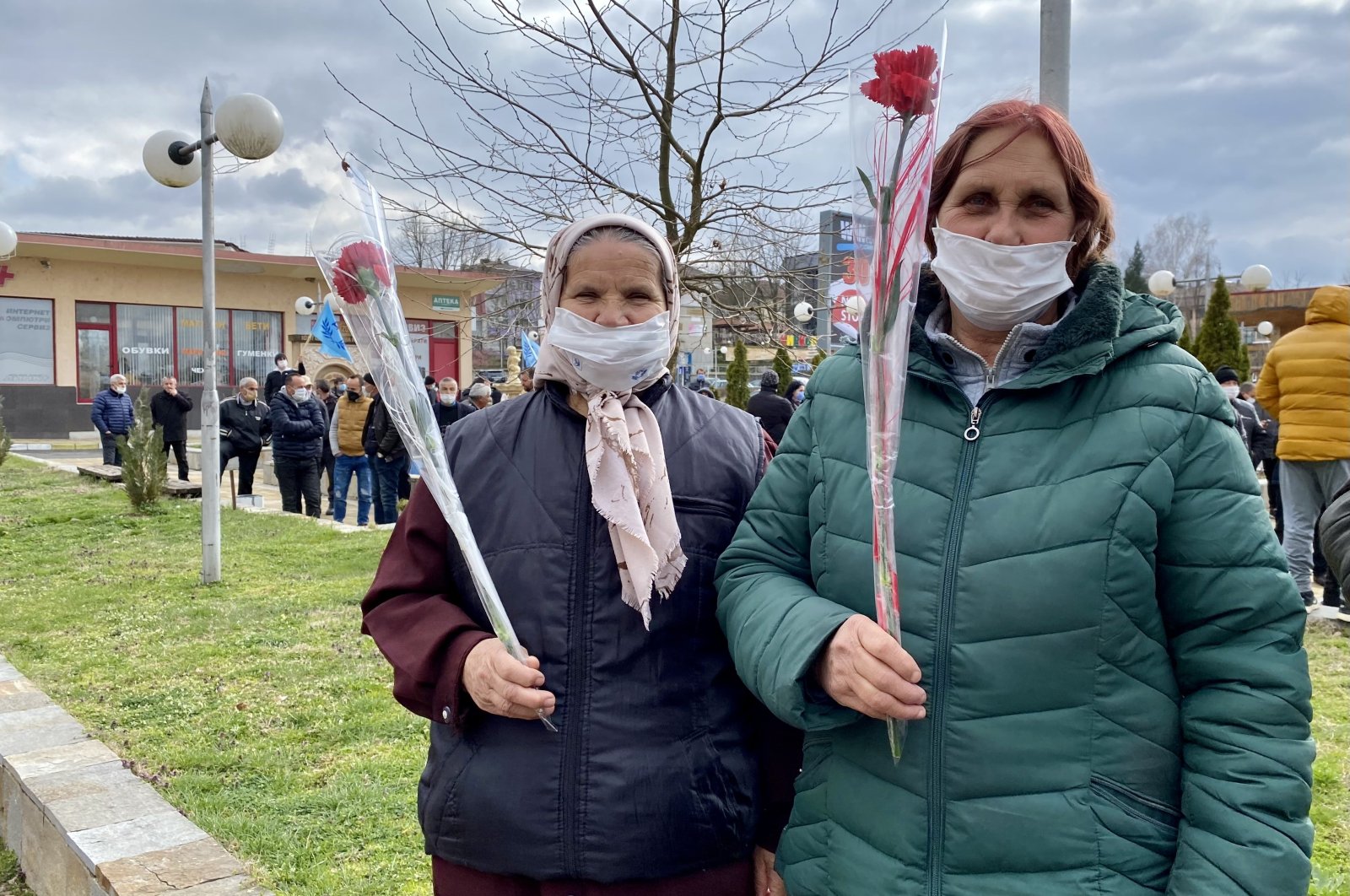 In Bulgaria, the parliamentary elections will take place on April 4. The parties and election coalitions will be in a race for 240 seats in parliament. This election will be the first since 2009 to be held within the four-year timeframe set by the Bulgarian Constitution. A political party or coalition must obtain a minimum of 4% of the vote in order to enter the National Assembly.

There are 22 parties and eight coalitions registered for the upcoming elections. According to Bulgaria's Foreign Ministry, Bulgarian citizens abroad will be able to vote in 465 polling stations in 69 countries, one of which is Turkey, which has the largest number of Bulgarian citizens of Turkish descent.

Accordingly, there will be 35 polling stations in the country, which is the maximum number of polling stations allowed by the Electoral Code of Bulgaria outside the European Union. Some have criticized the limited number of ballot boxes for citizens living in Turkey to 35 as a move that could prevent the Turkish Bulgarians from voting. It is estimated that there are 350,000 expatriate residents in Turkey and they could be capable of influencing Bulgarian domestic politics.

Bulgaria was rocked by demonstrations over three months as thousands of citizens took to the streets to protest against the government under Prime Minister Boyko Borisov, who has led the country for 11 years.

A clash between Borisov and President Rumen Radev is also weakening the viability of the government as the president supported the protesters and accused a mafia of controlling Borisov's government. These represent only some of the problems faced by Borisov's ruling Citizens for the European Development of Bulgaria (GERB) party and indicate clearly that radical reforms are needed.

Although many analysts predict that Borisov will not win the election due to peoples' anger and the growing awareness of corruption and economic turmoil, he is still the strongest candidate in the country, according to one of the latest opinion polls published by Alpha Research on March 2.

The poll shows that Borisov’s GERB Party has 28.5% of the support of those who intend to vote and the Bulgarian Socialist Party (BSP) 23.2%. The party formed by showman and singer Slavi Trifonov has 13.3%, with the Movement for Rights and Freedoms (DPS), known as the Turk's party, close behind with 12.5%.

The Borisov government was backed by the coalition of ultranationalist parties, the "United Patriots (OP)," after the 2017 general election. It became the minority partner in government in May 2017. The three members of the OP coalition were Krassimir Karakachanov’s Bulgarian National Movement (IMRO), Valeri Simeonov’s National Front for the Salvation of Bulgaria (NFSB) and Volen Siderov’s Attack (Ataka) Party.

The three parties stood together in Bulgaria’s 2017 early parliamentary elections and together they gained enough votes to make them a coalition government partner.

However, the OP coalition had a serious internal crisis due to the fact that two of the parties in the alliance voted to expel the third, Volen Siderov’s Ataka Party in 2019.

The OP coalition officially disbanded and decided to diverge in the 2021 elections.

According to Alpha Research, Gallup and more, the NFSB and Ataka Party will likely be under the threshold, while the IMRO will possibly win a place in the national assembly passing the 4% threshold by a very small margin. So, if the GERB wins, with whom will it make a coalition is the $64 question that needs to be answered.

As previously seen, the DPS will possibly be the third or fourth party after the election. Although forming a government with the DPS is one of the best options for the leading parties, powerful businessperson and media mogul Delyan Peevski, a member of the DPS, has a negative public image in the country.

Furthermore, protests revolve mostly around his work, which is associated with corruption. For this reason, the GERB and the BSP, the top two parties with the highest scores, have some reservations about cooperating with the DPS, since Peevski is at the center of political allegations from Borisov, Radev and the opposition parties.

However, it should not be forgotten that both the BSP and GERB have cooperated with the DPS in the past. The most important issue, affected by all these accusations in politics, is the rights of Turks, which seems in a further deadlock.

Shortly after DPS’s establishment in 1990, after the fall of communism, it took a key position in the country's politics and has consistently been in parliament since.

It is seen as the foremost representative of Turks and Muslims, even though there have been ruptures within the party and attempts made to establish new parties.

For instance, there was a split in the party in 2015 between the two most important leaders, Ahmet Doğan and Lütfi Mestan, due to ideological and political disagreements. While Doğan is the chairperson of honor of the party, Mestan was removed as party leader and expelled due to his pro-Turkish government stance following the downing of a Russian bomber jet by the Turkish Armed Forces (TSK).

Hereby, Mestan founded a new party called the Democrats for Responsibility, Freedom and Tolerance, or DOST – an acronym meaning "close friend" in the Turkish language – establishing another ethnic Turkish party in Bulgaria.

However, the DOST party failed to pass the threshold to gain parliamentary seats in its first election in 2017. Soon, Mestan’s party literally broke down. A total of 30 DOST leading politicians announced they were leaving the party.

Therefore, the party is unable to participate in the 2021 parliamentary elections. So, the DPS remains, once again, the sole representative of Turks and Muslims.

Although the DPS gets the majority of its votes from the Turks, the DPS's local organization has spread not only to the places where Turks live but also throughout Bulgaria.

Even though the DPS has been widely criticized by the Turks on the grounds that it did not sufficiently defend their rights, the party has managed to remain in the hearts of the Turks for what it used to do in the past.

For instance, the Turkish language has been taught in schools as an elective, Turks have acquired the right to use their own names, and the party started an initiative for Turks who lost their citizenship after forced migration to reacquire Bulgarian citizenship.

On the other hand, the party's most important promise is employment, which is a key issue for people in Bulgaria where the unemployment rate increased to 5.9% in the second quarter of 2020 from 4.2%, according to the National Statistical Institute (NSI).

Considering that the link between job opportunities and politics is very strong in Bulgaria, a great number of Turks are able to find jobs through the party. It also imposes the idea that the Turks will be stronger under one roof, given the fact that there is fear and insecurity towards Bulgarians.

That’s why new party initiatives such as the DOST fail. However, the more DPS cooperates with the Bulgarians – especially those who are controversial in the public sphere – to gain strength in Bulgarian politics, the more complaints will increase about the party since it is moving away from the problems important to Turks.

Moreover, the party faces a major crisis with regard to the Bulgarian public. The close relationship between Doğan and businessman Peevski damages the DPS since many Bulgarians and Turks are outraged that a figure as controversial as Peevski was placed at the heart of the country's sensitive politics.

To sum up, Turks are the largest ethnic group in the country after the Bulgarians. They comprise around 10% of the total population of Bulgaria. The problems most crucial to them are corruption, unemployment and the lack of infrastructure in the villages where they live.

For instance, there is still a dependence on agriculture in Kardzhali (Kırcaali) and Razgrad, where the Turks mostly live.

Therefore, they need investments from abroad, especially from Turkey, in order to increase employment. The desire to learn the Turkish language is also decreasing day by day due to political and social reasons.

According to the Bulgarian Constitution, citizens have the right to learn their own language in addition to Bulgarian, which is the mandatory language in the country.

However, just as the appropriate funds for teaching and learning materials are not supplied, people are reluctant to learn the Turkish language since languages such as German and French are the most widely spoken languages in the European Union and more advantageous for employment.

According to a respondent living in Shumen (Şumnu), a myriad of well-educated Turkish teachers were forced to migrate to Turkey in 1989, as part of the assimilation campaign against the Turkish minority in Bulgaria. After which Bulgaria was unable to train good teachers who are capable of teaching Turkish well.

Because of this, the Turkish language in Bulgaria, which is the cornerstone of Turkish culture and history, is forgotten or learned in an inadequate manner.

Politically, Turks are fighting for their election campaigning right in Turkish which was banned by an electoral law that allows campaigning solely in Bulgarian. For example, Bulgaria’s Central Election Commission (CEC) banned the showing of an election campaign video by Mestan’s DOST party because it had subtitles in Turkish during the 2017 Bulgarian parliamentary election.

Turks have been on the receiving end of complaints and penalties over the years about this issue. The DPS's attempts in previous parliaments to get the law about Turkish election campaigning changed have failed in the face of opposition from all other parties.

For the number of reasons mentioned above, Turks in Bulgaria are in a tight situation between the ideal and reality.

The polls show that the DPS is the undisputed winner as an ethnic-Turkish party in the election but it will not bring about a major change.

Turks would like to gain more rights, wealth and equality in Bulgaria. Perhaps, the search for an alternative goes beyond supply. However, on the other hand, they can’t rely on alternatives to represent them in politics which makes them in need of the DPS.

*Analyst on the Balkans