Can Iran find a way out of natural gas crisis ahead? 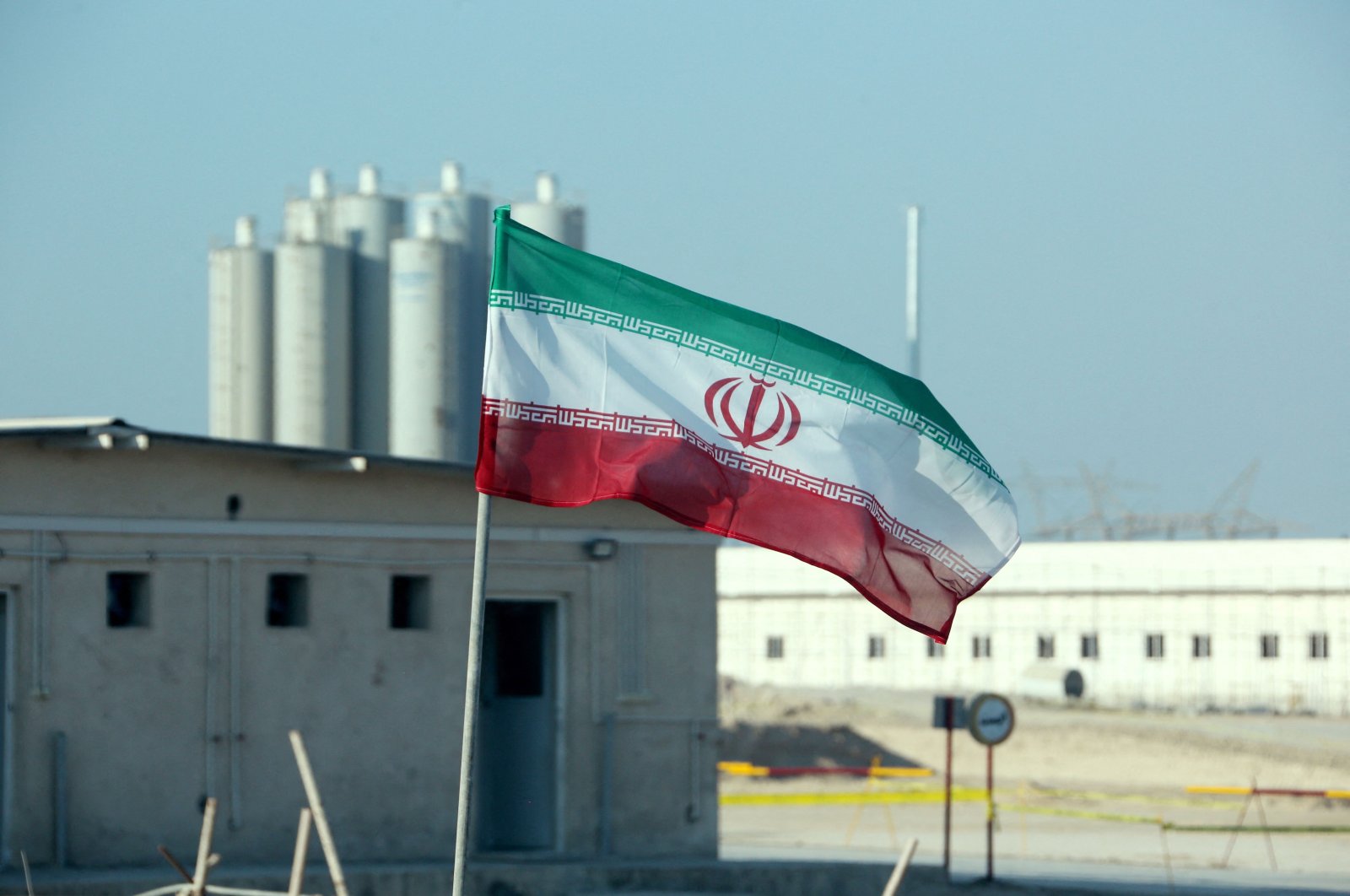 An Iranian flag in Iran's Bushehr nuclear power plant, during an official ceremony, to kickstart works on a second reactor at the facility, in Bushehr, southern Iran, on Nov. 10, 2019. (AFP Photo)
by Omid Shokri Kalehsar Jun 29, 2021 12:05 am

Iran, which has the world's second-largest natural gas reserves, faces difficulties maintaining and distributing the resource. If the necessary precautions are not taken, there may be an electricity and natural gas shortage in the country in the near future

Iran has the world’s second-largest natural gas reserves. During the last decade, Iran has spent billions of dollars to extract and produce natural gas to meet domestic demand. But at present, due to political, economic and geopolitical issues in production and exports the country is facing a major challenge.

The search for natural gas is one of the most important priorities of Iran’s oil ministry, which plays an important role in maintaining the production capacity of natural gas by discovering and replacing new reservoirs, as well as increasing the country's reserves and promoting Iran's position among gas producing countries.

Iran is one of the world's major consumers of natural gas. The domestic consumption of natural gas is divided into many categories, including consumption of domestic, commercial and public sectors as well as industry, transportation, agriculture and petrochemical feedstock.

Last year, Iran faced a shortage of gas for the first time in the fall, and it used highly pollutant fuel oil in power plants for a while, which led to severe air pollution for several months in various cities across the country.

Iran has always faced a gas deficit in the winter, but last year the gas shortage began in the fall. Contrary to Iranian officials' claims of a "significant increase" in gas production, Iran does not appear to have succeeded. And it is important to note that in the next two years, the pressure of the Iranian section of the South Pars field, which is a major supplier of gas to the country, is likely to start dropping.

About 70% of Iran's gas is supplied from the South Pars joint field. Energy experts have repeatedly warned of a drop in pressure in the field. This information has already been repeatedly confirmed by the Iranian oil ministry but no action has been taken so far.

In the first week of June, Malek Shariati Niasar, the spokesperson of the Energy Commission of the Islamic Consultative Assembly, announced the results of the investigation carried out to find the reasons behind the pressure drop and the proposed plans to correct the situation.

According to Shariati Niasar, the construction of parallel pipelines and the installation of offshore compressors are among the proposed plans to compensate for the pressure drop.

According to him, the oil ministry and a group of companies operating in South Pars are following up on the issue so that the field does not face a pressure drop in the coming years.

From 2023 onward, a significant pressure drop is expected to begin in the Iranian part of South Pars and as a result, the production of the field will be reduced by 10 billion cubic meters (bcm) every year.

Usually, oil or gas fields enter the second half of their lives when part of their reserves have been extracted, and the natural pressure of the reservoir decreases. To counter the situation, Iran must find a way to maintain the level of production.

The pressure on the Qatari sector of the field had eased years ago, as Qatar managed to produce 2 1/2 times more gas from South Pars compared to Iran.

The solution for South Pars, similar to what Qatar has done, is to install 20,000-ton rigs (10 times the current rigs in the Iranian sector) with massive compressors to maintain production levels.

The first huge platform was supposed to be built by the French company Total for phase 11 with the next huge platforms to be installed in the coming years, but Total withdrew from the phase 11 contract after the U.S. withdrew from the Joint Comprehensive Plan of Action (JCPOA). Iran does not have the capability to construct such huge structures and advanced, powerful compressors on its own.

By mid-June, Iranian Oil Minister Bijan Zanganeh told lawmakers that he needed about $50 billion in investment to maintain production in South Pars and other gas fields.

Meanwhile, the budget of Iran's national oil and gas companies is financed either from oil and gas sales (14% of total exports) or through borrowing. In 1998, the Parliamentary Research Center reported that the debts of the National Iranian Oil Company (NIOC), along with the National Gas Company, had reached nearly $50 billion.

At best, even before the sanctions, Iran exported $60 billion of oil and gas products annually, and the share of the country's national oil and gas companies was about $8.5 billion.

According to the oil ministry, the total value of equipment and assets of the country's oil and gas industry is about $400 billion, and $20 billion is needed annually to repair, maintain and renovate them alone.

Thus, the NIOC's revenue does not cover even half of the cost of renovating old equipment, let alone new investment in oil and gas fields.

In another part of his speech, Zanganeh pointed out that 4.5 million Iranians do not have access to the country's gas network. He added that gas exports in Hassan Rouhani's government have doubled and if we want to have additional gas exports, we have no choice but to optimize consumption.

He said the oil ministry does not want to export gas and that the income from gas exports is spent on subsidies. The doubling of the country's gas exports is confirmed by international statistics, but the problem is that Iran itself faces a gas deficit in winter, last year also in autumn, and gas exports are questionable in the current situation. Iran even faced widespread power outages this spring but has not stopped exporting electricity.

Zanganeh went on to say that gas exports were not limited to the oil ministry and had "different political dimensions," all of which should be considered together.

He did not elaborate on the political dimension, but Iraq has been Iran's largest gas and electricity customer in recent years but has not paid the Islamic Republic due to sanctions. Iraq reportedly owes Iran $6 billion.

In another part of his speech, Zanganeh added that there is an annual $35 billion gas subsidy in Iran. The latest report from the International Energy Agency says that the hidden gas subsidy in Iran stands at $18 billion. This means that if the Iranian government exports gas instead of consuming it domestically, it will earn $18 billion more. Of course, Iran also has $52 billion in hidden electricity subsidies, and more than 70% of the fuel for Iran's thermal power plants is supplied by gas.

In recent weeks, rising temperatures in some areas and rising electricity consumption have led to power outages in several Iranian provinces, forcing Turkmenistan and Azerbaijan to import electricity.

Of course, rising temperatures were not the only cause of power outages. Decreased efficiency of power plants, burnout of energy infrastructure, loss of electricity in the power generation and distribution network and bitcoin mining were other factors involved in this situation.

Most of the electricity consumed in Iran comes from thermal power plants, and rising gas consumption in power plants as well as in the domestic sector has raised concerns about the future of the country's natural gas production.

Iran's power plants also have a very low efficiency of about 37%, which Zanganeh also pointed out, saying: "If power plants increase their thermal efficiency, they can easily get 1.5 times more electricity with the gas that is provided to them."

"They will produce and will not need more gas to produce more electricity, but when the price of gas for power plants is almost zero, why should they invest?”

Due to the political situation in Iran, under normal circumstances, it is difficult to attract foreign capital and technology to achieve the goals of natural gas production and consumption in the country up to the horizon of 2040. The continuation of sanctions, the lack of reform in the pattern of electricity and natural gas consumption, along with the infrastructural problems of the Iranian energy industry, are not things that can be expected to be solved in the short term.

The tense and uncertain foreign policy of the Financial Action Task Force (FATF) will continue to contribute to the problems and challenges of the natural gas industry even if the sanctions are lifted after a possible agreement between Iran and the United States after the presidential election. If the problems of the country's natural gas industry are not resolved in the short term, we will undoubtedly see a crisis in the gas and electricity industry in the coming years, and Iran, which was supposed to be a major player in the global gas market and "hub" of electricity trade regions, will be facing a shortage in electricity and gas supply.