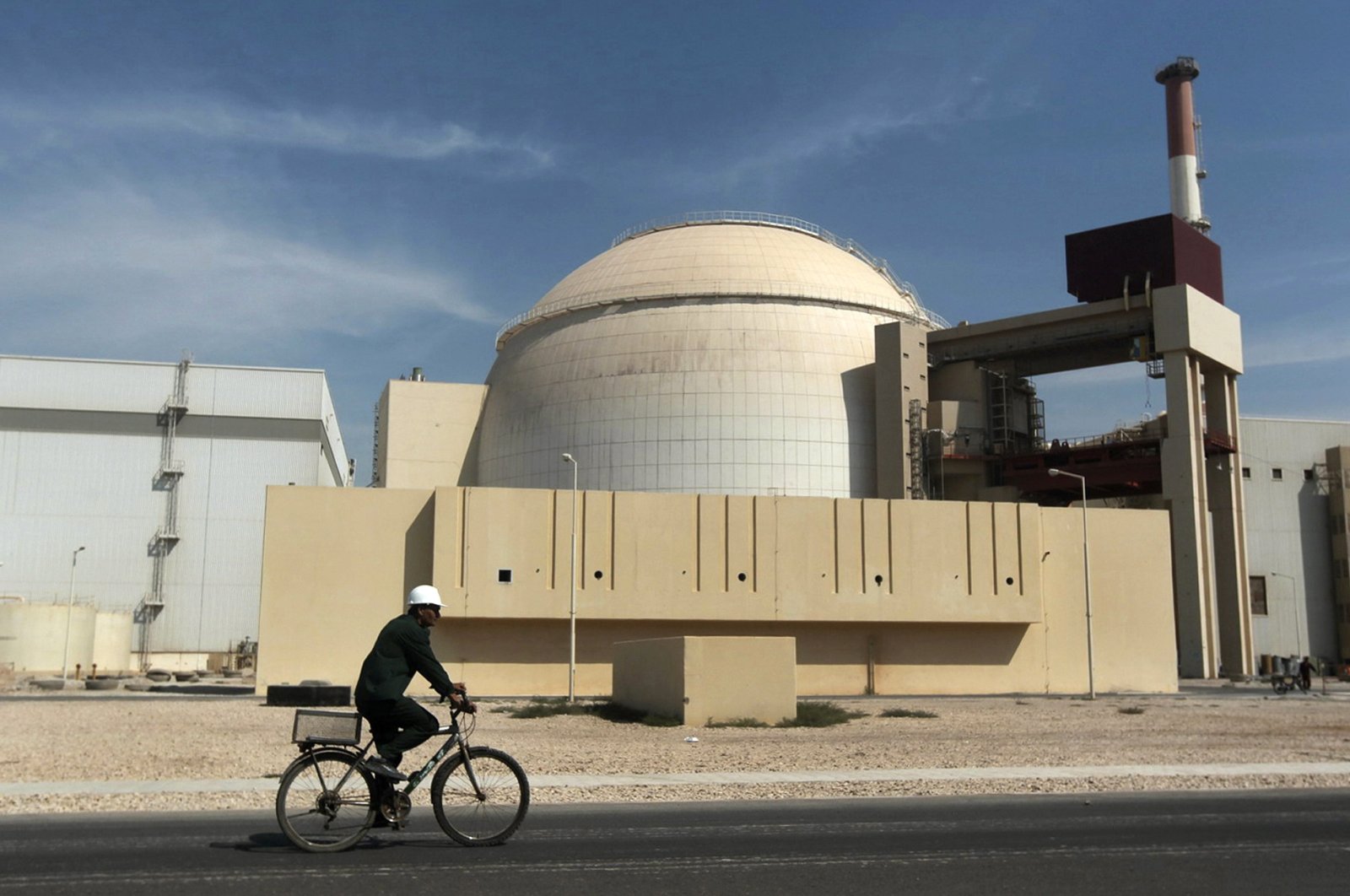 A worker rides a bicycle in front of the reactor building of the Bushehr nuclear power plant, just outside the southern city of Bushehr, Iran, Oct. 26, 2010. (AP Photo)
by Agencies Jun 21, 2021 9:33 am
RECOMMENDED

Iran’s only nuclear power plant, the Bushehr plant in the south has been temporarily shut down due to an unspecified emergency, the country's state TV reported.

An official from the state electric company Tavanir, Gholamali Rakhshanimehr, said on a talk show that aired Sunday that the Bushehr plant shutdown began Saturday and would last "for three to four days.” Without elaborating, he said that power outages could result.

The country's atomic energy body later said in a statement that the shutdown was due to a "technical fault."

This is the first time Iran has reported an emergency shutdown of the plant in the southern port city of Bushehr. It went online in 2011 with help from Russia. Iran is required to send spent fuel rods from the reactor back to Russia as a nuclear nonproliferation measure.

The report came as top diplomats said that further progress had been made at talks Sunday between Iran and global powers to try to restore a landmark 2015 agreement to contain Iranian nuclear development that was abandoned by the Trump administration. They said it was now up to the governments involved in the negotiations to make political decisions.

In March, nuclear official Mahmoud Jafari said the plant could stop working since Iran cannot procure parts and equipment for it from Russia due to banking sanctions imposed by the United States in 2018.

Bushehr is fueled by uranium produced in Russia, not Iran, and is monitored by the United Nations’ International Atomic Energy Agency (IAEA). The IAEA acknowledged being aware of reports about the plant, but declined to comment.

Construction on the plant, on the coast of the northern reaches of the Persian Gulf, began under Iran's Shah Mohammad Reza Pahlavi in the mid-1970s. After the 1979 Islamic Revolution, the plant was repeatedly targeted in the Iran-Iraq war. Russia later completed construction of the facility.

The plant, which sits near active fault lines and was built to withstand powerful quakes, has been periodically shaken by temblors. There have been no significant earthquakes reported in the area in recent days.

Meanwhile, the European Union Sunday chaired the final meeting in Vienna of the sixth round of talks between Russia, China, Germany, France, Britain and Iran.

The nations involved in the negotiations have been trying to resolve the major outstanding issues on how to return the U.S. into the landmark nuclear agreement, which then-President Donald Trump pulled Washington out of unilaterally in 2018. Trump also restored and augmented sanctions to try to force Tehran into renegotiating the pact with more concessions.

The meeting was the first since Iran’s hard-line judiciary chief won a landslide victory in the country’s presidential election last Friday. Some diplomats expressed concern that the election of Iran’s incoming President Ebrahim Raisi could complicate a possible return to the nuclear agreement.

Iran started rolling blackouts in May of this year after Tehran and several other cities were hit by unannounced power cuts that sparked complaints from consumers and prompted an apology from the energy minister.

Power cuts in the peak summer months are not uncommon in Iran, but a government report last month said precipitation was down 34% compared to the country's long-term average and warned of reduced water supplies for the year.

Since late May, the energy ministry has been regularly notifying citizens of "potential blackouts" lasting at least two hours unless consumption in their area drops.

Iran's outgoing President Hassan Rouhani last month announced a ban on all cryptocurrency mining until September to reduce the pressure on the power grid.

The Islamic republic has announced plans to construct 20 nuclear power plants in the long term in order to reduce its reliance on fossil fuels.

The 2015 nuclear deal promised Iran sanctions relief in return for limits on its nuclear program.

On May 23, nine people were injured in a blast at a plant producing explosive materials in central Iran, local media reported, and three days later, a pipeline explosion at a petrochemical complex near Iran's Gulf coast left one dead.

Some in the country see the various events as the result of attacks by Israel's security forces. Others consider U.S. sanctions – which almost completely isolate Iran from the rest of the world, complicating the maintenance of industrial facilities – as a more likely cause.

In July last year, a "worn out transformer" was blamed by a provincial electricity company for an explosion that hit a thermal power plant in the central province of Isfahan.