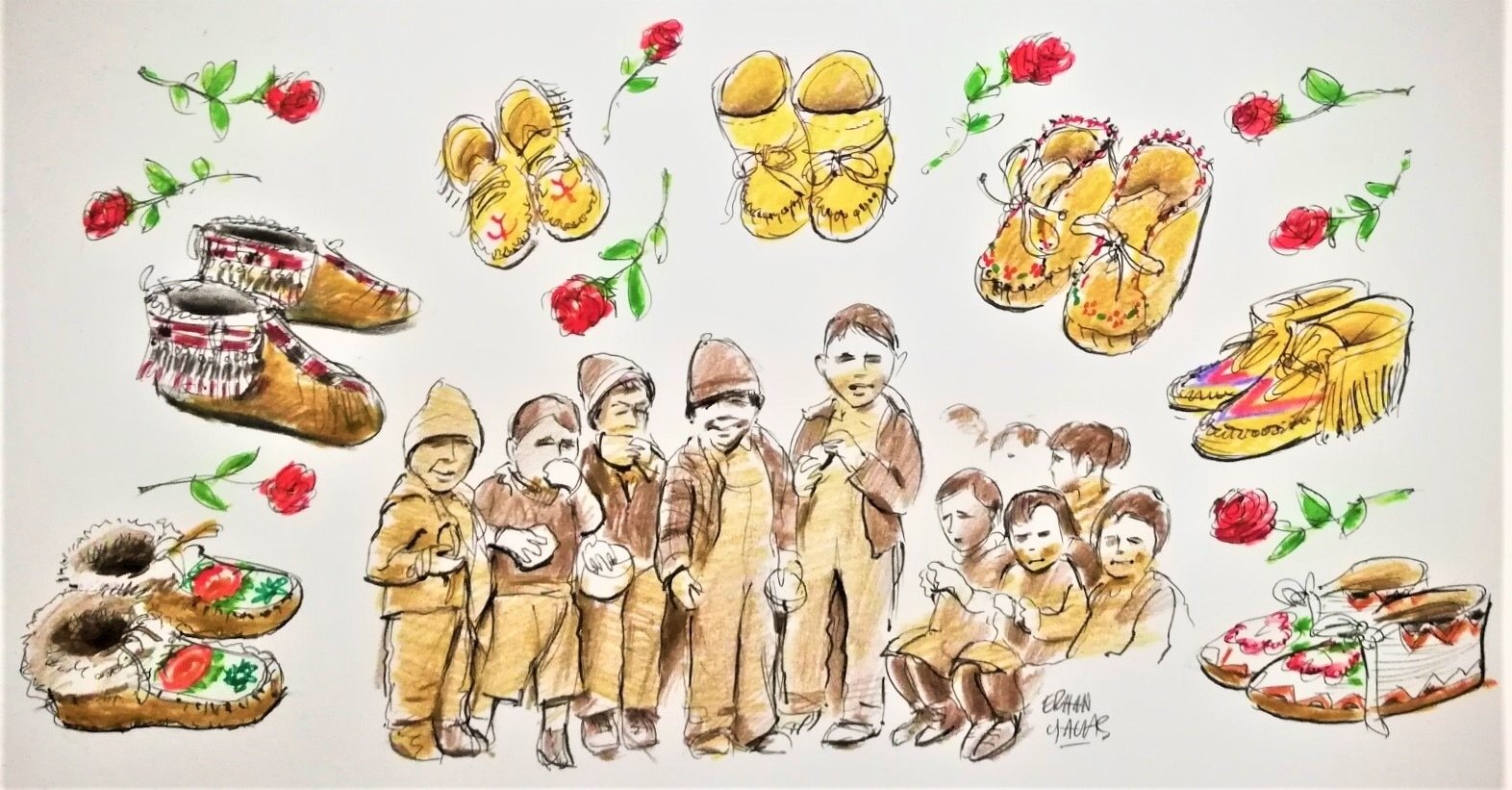 Canada's dark side, which has been hidden in history, was finally revealed with the discovery of the bodies of hundreds of children at residential schools. The Indigenous people who have suffered centuries of cultural genocide expect more than an apology

In recent weeks, Canadian protesters have set church buildings on fire and torn down statues of Queen Victoria and Elizabeth II. These actions have been spurred by the discovery of unregistered mass graves of Indigenous children in Canadian church-run residential schools.

These illegal burials, described by Canadian Prime Minister Justin Trudeau as "one of the darkest chapters in Canadian history," have shaken the country's agenda in recent days. But it has also brought up an unspoken issue: The Indigenous cultures wiped from their lands.

On May 29, 2020, the remains of 215 children were found in the garden of a boarding school in Kamloops, British Columbia. Penetrating radar scans were launched at 139 schools in the country after this incident, and on June 24, unmarked graves containing the remains of 751 unrecorded child bodies were found in the garden of Merieval (Cowessess, Grayson) Indian Residential School in Saskatchewan province.

Later, 182 more unregistered graves were found. According to Canadian official broadcaster CBC, more than 1,300 graves of unregistered children have been unearthed so far, with the discovery of more than 160 unnamed child graves in the vicinity of a boarding church school in the province of British Colombia.

These unregistered burials in residential church schools is currently the most important issue dominating the Canadian Parliament. Meanwhile, Canadian Indigenous leaders have called for a "boycott of the church."

Bobby Cameron, head of the Federation of Sovereign Indigenous Nations (FSIN), one of the largest Indigenous organizations in Canada, asked Catholics not to go to church, according to CBC.

Cameron has called for the Church to make all residential school documents public, and Pope Francis to come to Canada and apologize for what happened. The chief of the Cowessess Indians has said that the Catholic Church aimed to brainwash Canada's Indigenous.

As reactions to the events in Canada continue, so far, not a single step has been taken other than an apology to authorities. The federal government denied a funding request to find the missing graves.

However, as protests increased and it was clear the issue was remaining on the agenda, Canadian Prime Minister Justin Trudeau signed an agreement with the Cowessess First Nation society that gave full authority to the locals on child welfare. With the agreement, those in charge of child and family services will have full authority.

So, why were these church residential schools established to begin with?

The first church residential school was opened by the Catholic Church on behalf of the Canadian Government in 1840, and in 1997 the last of the schools were closed. This period went down in history as a dark period when more than 150 thousand children were forcibly taken from their families and detained.

In fact, the Truth and Reconciliation Commission (TRC) was established in Canada in 2008 to investigate and reveal the truth of these horrific events in residential church schools, and the work was completed in 2015, with more than 6,000 surviving victims having being heard.

As a result of the commission's work, a 4,000-page report was published, and the death toll was recorded as 5,995. This whole dark period was defined as a "cultural genocide."

When we think of genocide, the first words that come to mind are usually murder and violence. However, when analyzing history, we see that these acts are often coupled with the destruction of culture and languge.

An example of this is the genocide carried out by the British settlers to exterminate purebred Tasmanians, recorded as the first modern genocide. Today, on the island of Tasmania, there is not a single person who can speak one of the many Tasmanian languages that once prospered. Not a single fully ethnically Tasmanian lives today.

Along with the physical destruction of a community, the language, culture and social relations that are unique to that community are also killed. The definition of genocide is often seen as mass murder. Although there is no common definition accepted by academic circles, there is a legal definition in the United Nations Convention on the Prevention and Punishment of the Crime of Genocide, known in short as the Genocide Convention.

When we look at the definition of genocide in the second article of the Genocide Convention, it is described as the actions taken to destroy a nation, an ethnic, racial or religious group in whole or in part. But is genocide just the wiping out of a community from the world? Shouldn't the destruction of indigenous cultures also be included in the definition of genocide?

For now, I want to answer this question myself. Yes, it should. The murder of members of a society and the destruction, assimilation and forced destruction of a society's unique structure should be included in the definition of genocide.

So why isn't the killing of culture included in the definition of genocide? Because the majority of the states that we define as developed are the ones with a bloody, colonial history.

Threats to the cultures of local communities are not always violent in nature. Sometimes a method that appears positive is applied. One of them is modernization. The method can change and adapt according to the social structure, sometimes shedding features and replacing them with new ones. This is a natural development, but also change. However, the actions of the dominant groups under the guise of modernization and positive change threaten native communities and often cause them to disappear.

These are exactly the issues Canada's Indigenous people brought up through their recent protests. This is what the chief of the Cowesess Indians meant when he said that all this was done to brainwash their people and make sure they abandon their faith. The main reason for the whole tragedy was to integrate the natives into a society dominated by white children.

When colonial Europeans came to Canada at the end of the 16th century, they encountered the First Nations who had lived there for at least 10,000 years. The culture, beliefs and ceremonies that the colonizers were confronted with in Canada had been passed down for generations and survived until the colonial period.

However, after this century, the number of Indigenous people began to decline. The people who owned the land for 10,000 years were forced to fight identity wars to protect their communities.

With the assimilation studies and genocides that lasted for many years, we only talk about three Indigenous communities in Canada today. However, they, too, were forced into church residential education and made to comply with rules set by white people for many years.

These children, who were forcibly taken from their families, were also forcibly made to give up their communities, cultures and languages. Canada's native people, who could not perform their own cultural dances or hold their ceremonies, were trained to become better Canadian citizens who could speak English.

Residential church-run schools were the Indigenous peoples' only option for education and it was compulsory for children. Students were forced to culturally assimilate but many also experienced physical and sexual violence before they were buried in unmarked graves.

The people who have belonged to those lands for thousands of years are now speaking up to secure their rights because they are still being abused in their own lands. But this particular crime against humanity has been committed many times throughout history.

From the moment colonizers entered India, Africa and many other regions, acts of genocide began taking place. Today, Canada apologizes for the genocide on its lands by confronting its colonial past.

However, as expressed in slogans in protests in Canada, they were once children and deserved to live freely in their own culture.

A Long Way From Home

Throughout history, various cultures and civilizations on every continent have emerged, evolved, interacted with other cultures, and died naturally over time. No civilization can be deemed the one and only, ultimate culture.

However, when we look at the history of colonialism, cultures that should have been preserved in the name of "modernization" have been destroyed with blood. These irreparable wounds inflicted on ancient civilizations are not only crimes against humanity but also a blow to world heritage.

Even if we cannot regain lost cultures today, it is clear that more effort is needed than an apology.

The lyrics of the song "Sometimes I Feel Like a Motherless Child," which tell the story of the children of slaves being bought and sold in the United States, describe very well the wounds inflicted by colonialism.

The time has come for them to return to their homes and cultures.