Canada under fire as 751 graves discovered at indigenous school 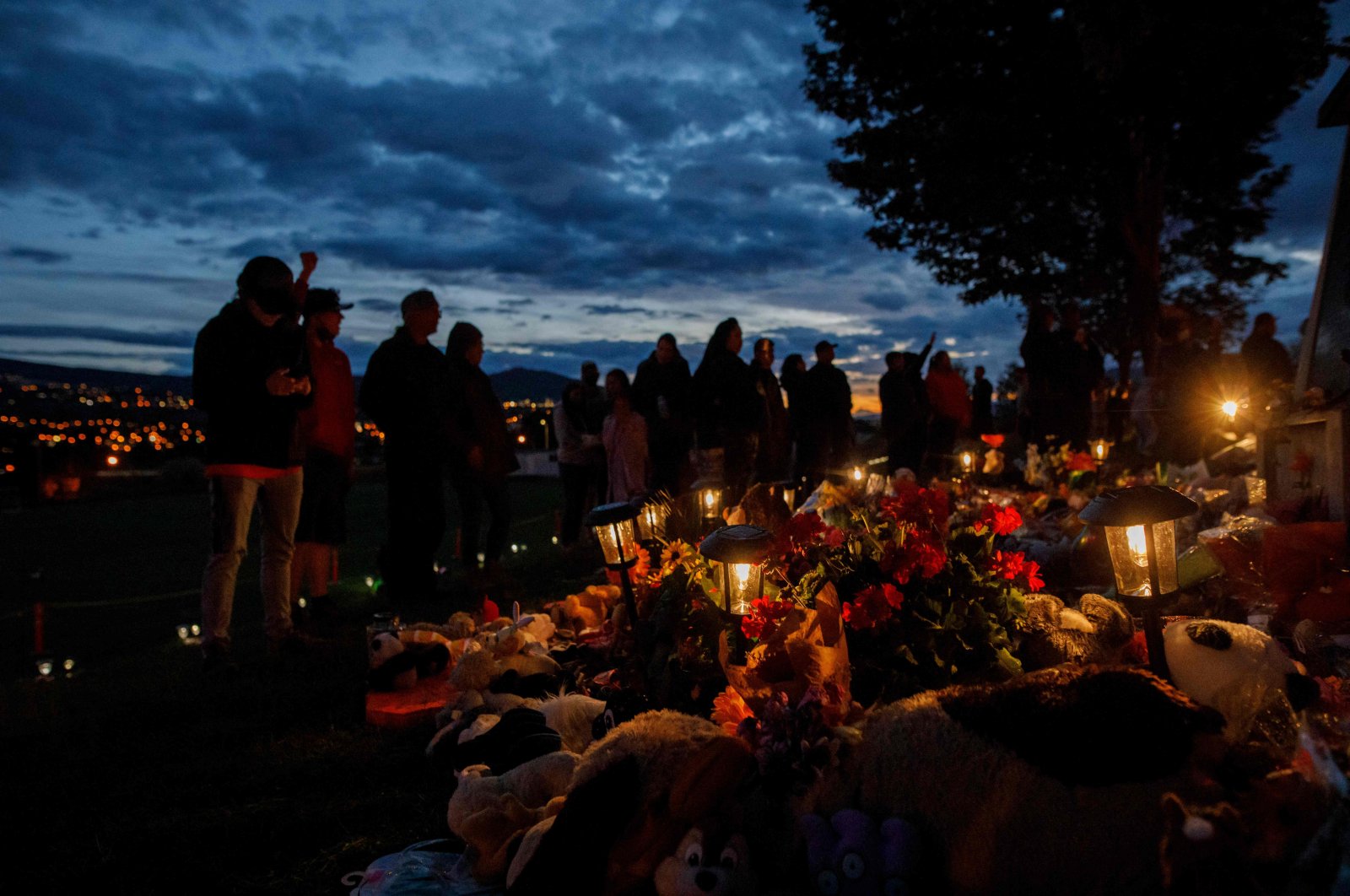 People gather outside the former Kamloops Indian Residential School as they welcome a group of runners from the Syilx Okanagan Nation taking part in The Spirit of Syilx Unity Run, following the discovery of the remains of 215 children buried near the facility, in Kamloops, British Columbia, Canada, June 6, 2021. (AFP Photo)
by French Press Agency - AFP Jun 24, 2021 5:53 pm
RECOMMENDED

A First Nation community in Canada's Saskatchewan province said on Thursday it had found the unmarked graves of 751 people near a former Catholic boarding school for indigenous children in western Canada. The announcement comes less than a month after the discovery of the remains of 215 children in a mass grave near another school sent shockwaves through the nation.

The revelation once again cast a spotlight on a dark chapter in Canada's history and revived calls on the Pope and the church to apologize for the abuse and violence suffered at the schools, where students were forcibly assimilated into the country's dominant culture.

The Cowessess community in Saskatchewan province announced late Wednesday that it had made "the horrific and shocking discovery of hundreds of unmarked graves" during excavations at the site of the former Marieval boarding school, about 150 kilometers (90 miles) east of the provincial capital Regina.

The exact number of unmarked graves was not specified, but it would be "the most significantly substantial to date in Canada," the Federation of Sovereign Indigenous Nations (FSIN) said in a statement.

Leaders of the community and the FSIN were expected to give more details at a press briefing.

Excavations at the school began at the end of May, after the discovery of the remains of 215 schoolchildren at another former indigenous residential school in British Columbia.

After the discovery of the remains at the Kamloops school, excavations were undertaken near several former institutions for indigenous children across Canada, with the assistance of government authorities.

Some 150,000 Native American, Metis and Inuit children were forcibly recruited up until the 1990s into 139 of these residential schools across Canada, where they were isolated from their families, their language and their culture.

Many were subjected to ill-treatment and sexual abuse, and more than 4,000 died in the schools, according to a commission of inquiry that concluded Canada had committed "cultural genocide" against the indigenous communities.

Perry Bellegarde, national chief of the Assembly of First Nations, said the discovery of the Saskatchewan site was "absolutely tragic, but not surprising."

"I urge all Canadians to stand with First Nations in this extremely difficult and emotional time," Bellegarde said.

The Marieval residential school in eastern Saskatchewan hosted indigenous children between 1899 and 1997 before being demolished and replaced by a day school.

One former student, Barry Kennedy, told the broadcaster CBC he was shocked by the news but not surprised.

"During my time at Marieval Indian Residential School, I had a young friend that was dragged off one night screaming," he said, adding that he never saw the child again.

"His name was Bryan ... I want to know where Bryan is," Kennedy said.

He described a history of violence at the school.

And he said he imagined that the graves found so far were just the tip of the iceberg: "By the stories that ... were told by our friends and fellow students, there are multiple locations, you know, per school."

In early June, a few days after the discovery of the bones in Kamloops, U.N. human rights experts urged Ottawa and the Vatican to conduct a full and prompt investigation into the discovery. However, Pope Francis fell short to offering the apology sought by Prime Minister Justin Trudeau.

Pope Francis expressed his pain over the discovery of the remains of 215 Indigenous students and pressed religious and political authorities to shed light on "this sad affair.”