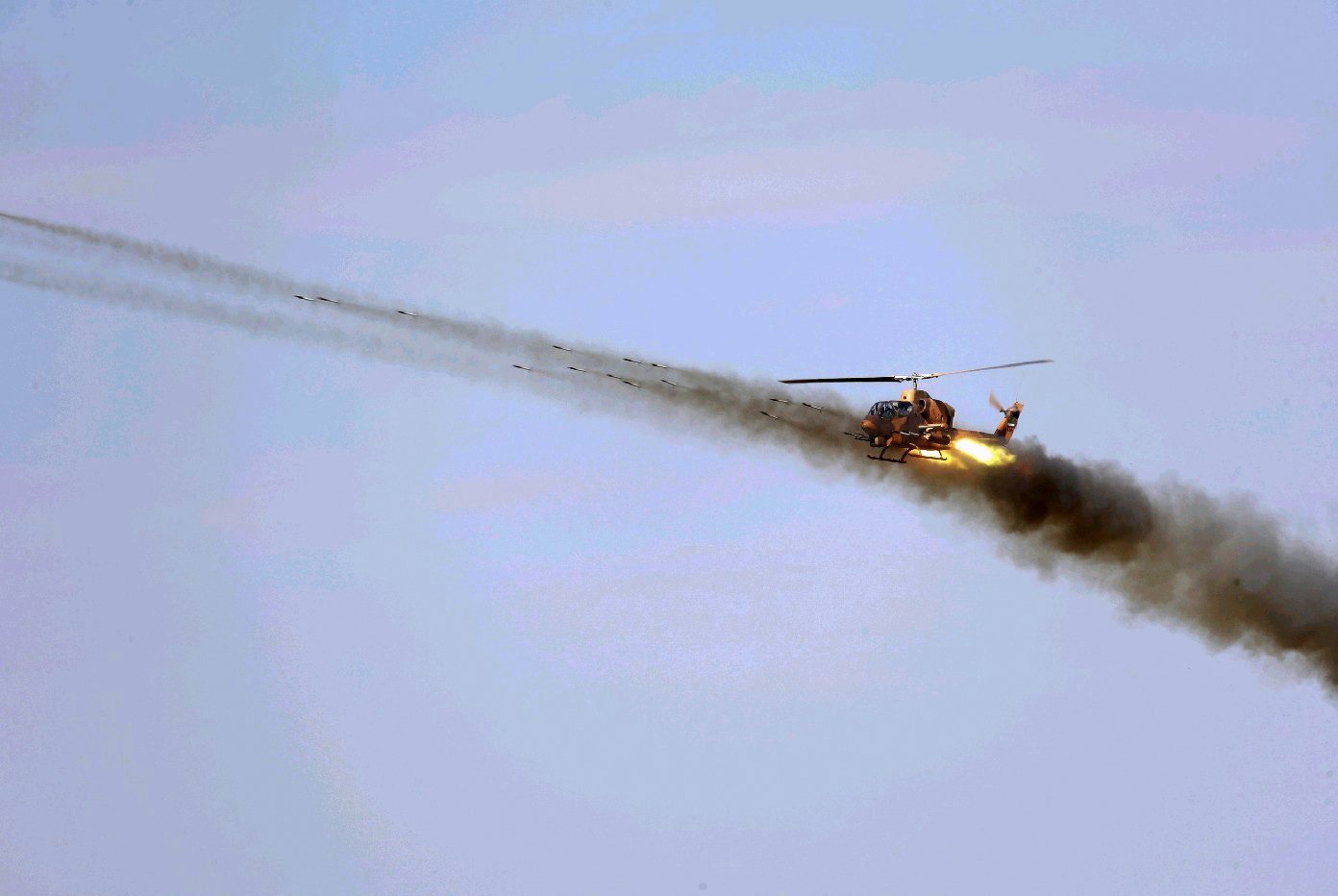 An Iranian army helicopter maneuvers during a military exercise in the northwest of the country, close to the Iranian-Azerbaijani border, Oct. 1, 2021. (AFP Photo)
by Basel Haj Jasem Oct 04, 2021 12:05 am
RECOMMENDED

The Iranian army recently held massive military exercises near its border with Azerbaijan. These drills come against the backdrop of escalating disputes between the two neighbors after Baku imposed tariffs on Iranian trucks crossing the border and heading to Karabakh.

However, Azerbaijan President Ilham Aliyev considers the drills illegal and his country has voiced objections to Iran through various channels.

He questioned the motive of Iran’s military moves in a recent interview with Turkey's Anadolu Agency (AA). He also criticized them for being held so close to his country’s borders and the fact that they coincide with the commemoration of the first anniversary of the second Karabakh war.

“Every country can conduct military exercises in its territory. It is their sovereign right. But considering the timing, why now and on our borders, in particular?” Aliyev said. “The question arises: Why were these exercises not carried out during the Armenian occupation?"

After a Russia-backed agreement was reached between Baku and Yerevan in coordination with Turkey, it can be said without exaggeration that Iran has lost more than Armenia.

Considering it important for peace in the south Caucasus, Iran officially welcomed it. However, statements and analyses from parties close to decision makers in Tehran indicate concerns about what situation the arrangements might reach in the future.

A few days after the Karabakh deal was reached last year, Irani lawmaker Ahmad Begish issued a statement requesting his government not recognize a transit corridor between Azerbaijan and Nakhchivan that would go through Armenia and border Turkey and Iran.

According to Azerbaijani media, Begish called on the parliament to officially declare that Iran does not recognize the geographical change of borders in the region and the corridor in question.

Iranian critics of the agreement that ended the second Karabakh war did not hide their concerns and claimed the deal would bring serious changes to their country's border since the proposed corridor runs alongside it.

In the last stages of the war, Tehran was keen to appear as a neutral mediator between Azerbaijan and Armenia and offered to hold talks on more than one occasion. In addition, it also denied the transit of weapons to Armenia through its territory, apparently in an attempt to come clean of the longstanding accusations that Tehran is supportive of Yerevan.

After 1993, despite the continuation of the Azerbaijani-Armenian conflict, Tehran, in general, did not show any special solidarity with Baku, and was inclined, in one way or another, toward Armenia.

There are many factors affecting Tehran-Baku relations – from Tel Aviv and Washington to the Armenian community in Iran, as well as concerns over separatist tendencies in Azeri-dominated regions inside Iran.

It may not seem that Iran and Armenia could be partners but the reality indicates that Tehran's relations with Yerevan are stronger than those with many neighboring Muslim majority countries. It is clear that there are reasons the two countries are moving toward each other, as Iran needs Armenia to provide an alternative crossing for transport to Russia and Europe, while Armenia faces a continuous blockage on trade routes due to the lack of communication with Azerbaijan and Turkey.

It is true that Iran has enjoyed strong relations with Armenia, but, on the other hand, it has not been able to place Azerbaijan within its regional sphere of influence. Despite a common religious background, as well as deep historical and cultural ties, Azeri nationalism in Iran is only second to Persian nationalism in the country's social structure.

Azerbaijan has maintained friendly relations with Tehran, because it relied on its airspace and territory to supply the Nakhchivan Autonomous Region, which lies between Iran, Armenia and Turkey.

In addition, the dynamics of bilateral relations have changed in favor of Baku, as part of Iran’s borders with Azerbaijan finally came under Baku’s control. This connected Azerbaijan with Iran's Azeri-dominated regions after decades of interruption due to the illegal occupation by Armenia, Tehran’s ally since 1994.