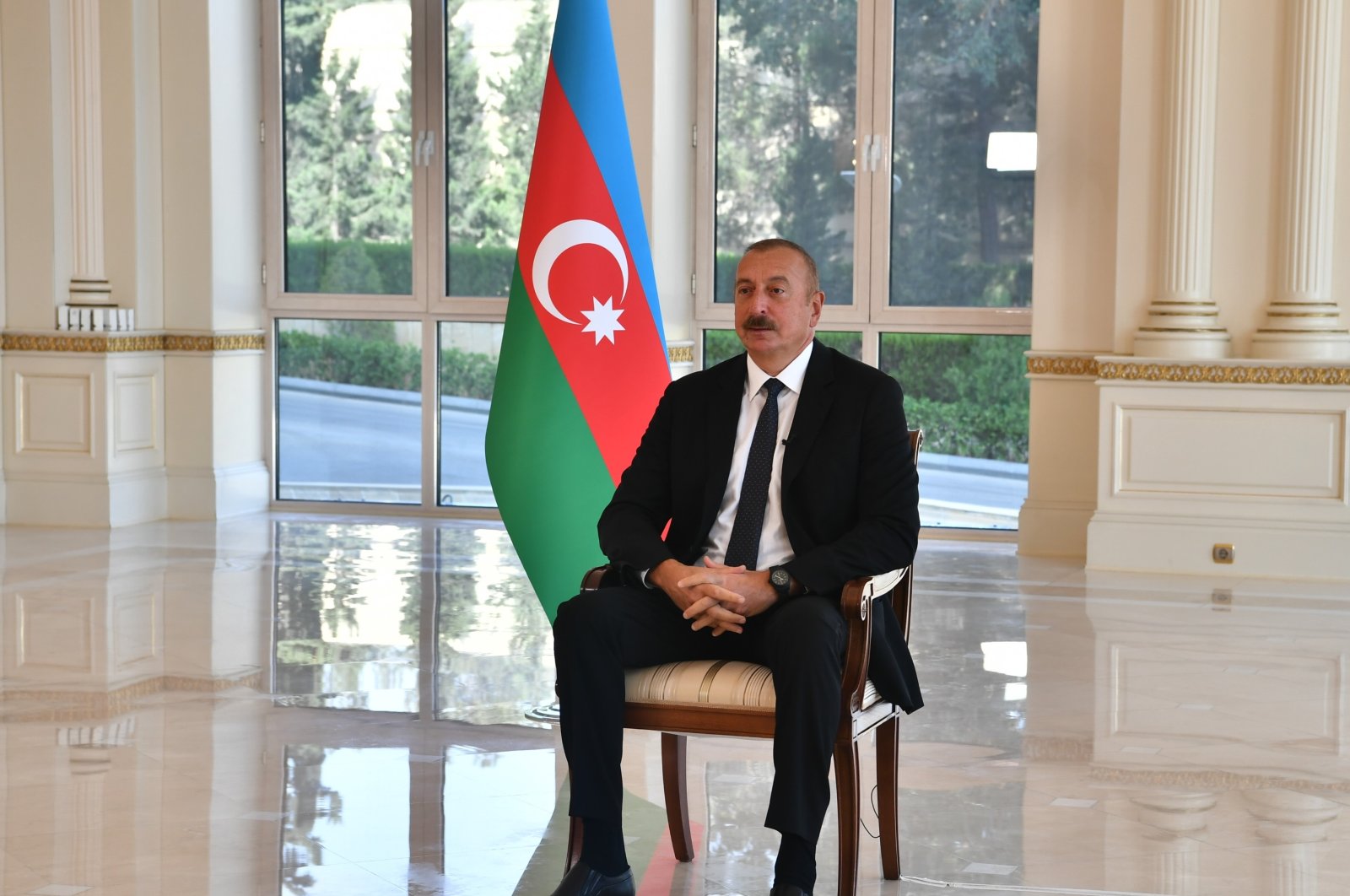 Armenia and big powers who did not stop Armenia's aggression had the biggest responsibility for last year's Karabakh war that culminated in Azerbaijan's victory liberating the territories that had been occupied for nearly three decades, Azerbaijani President Ilham Aliyev said Monday.

Aliyev spoke to Anadolu Agency (AA) on the first anniversary of the 44-day war that started on Sept. 27, 2020, for the liberation of the occupied Nagorno-Karabakh territories from Armenia.

"Of course, the biggest responsibility for the start of the second Karabakh war lies with Armenia. At the same time, the great powers that did not stop Armenia in time also bear responsibility," he said.

Aliyev underlined the failure of the Organization for Security and Co-operation in Europe (OSCE) Minsk Group to put pressure on Armenia.

"If the Minsk Group had put serious pressure on Armenia during its time, of course, Armenia would have had to leave the occupied territories. In such a case, there would be no need for war. Although the three states co-chairing the Minsk Group are three permanent members of the U.N. Security Council, they did not press this," he said.

The Minsk Group, co-chaired by France, Russia and the U.S., was formed in 1992 to find a peaceful solution to the conflict, but to no avail. A cease-fire, however, was agreed upon in 1994.

Regarding Russian military support to Armenia for the rearmament of the Armenian Army, Aliyev said: "When we became aware of this issue, we immediately asked the Russian side. However, we have been informed that this statement published in the Armenian press does not reflect the truth. This is the ugly act of Armenian propaganda. We have been officially informed that there is no such plan. Regarding the free rearmament of the Armenian Army, we received sufficient response from Russia."

Aliyev also touched upon Turkey's support to Azerbaijan during the last year's conflict. By siding with Azerbaijan, Turkey has given a message to the whole world, Aliyev said, and underlined that Turkey's message created a big advantage for Azerbaijan.

Another important topic Aliyev touched upon was the possibility of normalization with Armenia. He said that Erdoğan's proposal of a six-country regional platform is the best way for peace among regional actors.

"As for the normalization of Armenian-Turkish relations, we of course want peace in the entire region. I think the 3+3 platform proposed by Mr. President Recep Tayyip Erdoğan will be the best way to achieve this. But Armenia does not yet accept this," he said.

She noted that Yerevan was ready to establish the highest-level dialogue with Ankara and eliminate obstacles on the transit corridor that would have to go through Armenia to connect Azerbaijan to its Nakhchivan enclave that borders Turkey and Iran.

Mane Gevorgyan’s remarks came just a few days after Erdoğan expressed that Turkey was open to talks with Armenia if specific conditions were met.

Armenia and Turkey never established diplomatic relations and their shared border has been closed since the 1990s.

Following the last year's Karabakh conflict, Erdoğan proposed a six-country regional cooperation platform, saying it would be a win-win initiative for all regional actors in the Caucasus.

Turkey believes that permanent peace is possible through mutual security-based cooperation among the states and people of the South Caucasus region. Turkey had called for a six-nation platform comprised of Turkey, Russia, Iran, Azerbaijan, Georgia and Armenia for permanent peace, stability and cooperation in the region.