Diyarbakır mothers: Is there a geography of pain? 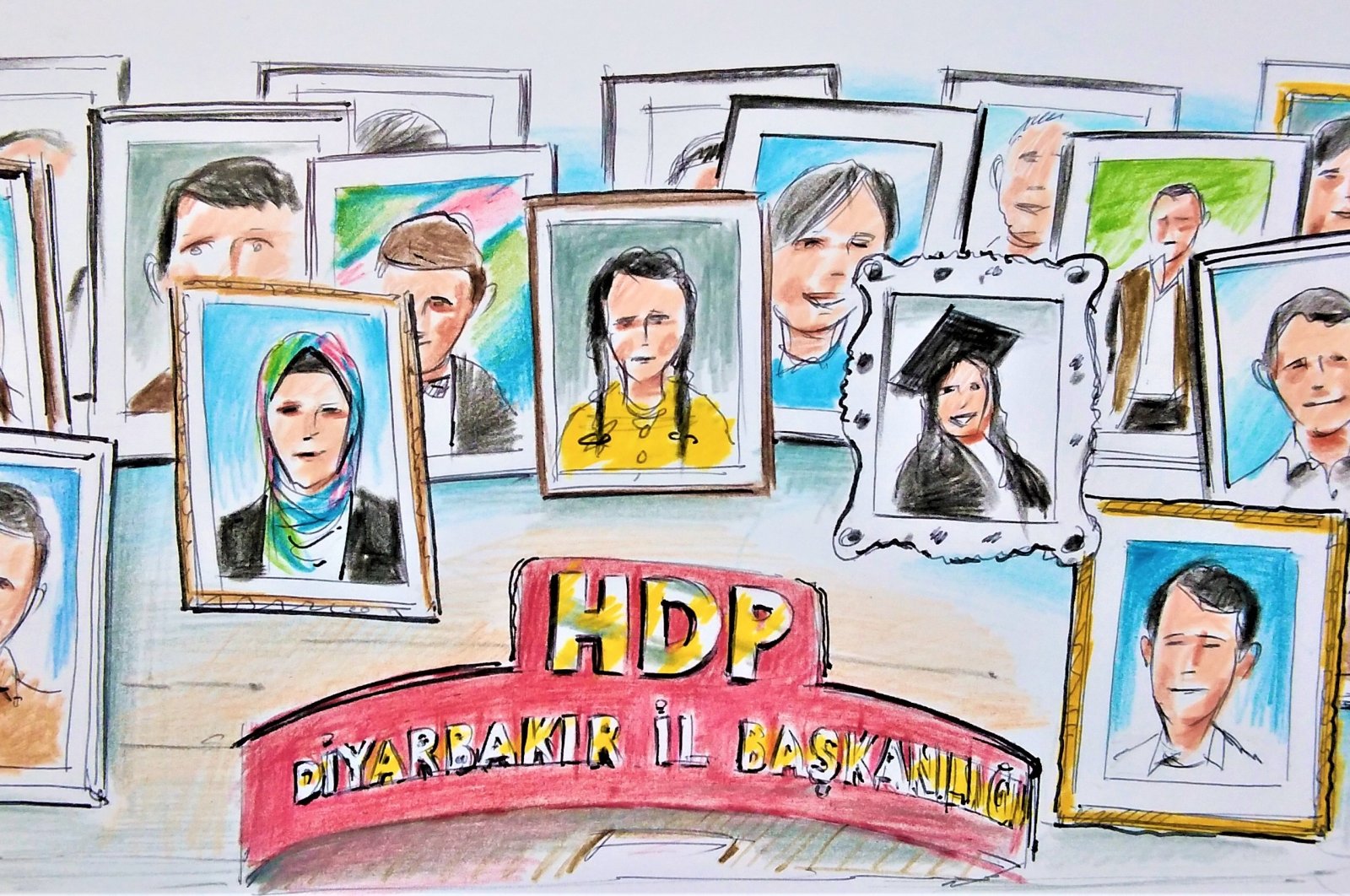 Illustration by Erhan Yalvaç shows the photos of children abducted by the PKK terrorist organization at the pro-PKK Peoples Democratic Party’s (HDP) headquarters in the southeastern province of Diyarbakır in Turkey.
by Tülay Demir Dec 15, 2021 12:05 am

Who will pay the price for the abuses committed against children in southeastern Turkey? They are our darlings, our hope, our future, our children…

Each case of child abuse shocks all of us. We condemn it and demand the heaviest punishment for those responsible. My mind is therefore with the “Diyarbakır mothers,” who gather day and night in front of the pro-PKK Peoples’ Democratic Party (HDP) headquarters in the southeastern province of Diyarbakır with the hope of rescuing their children abducted by the PKK terrorist organization.

What’s happening in Diyabarkır is a reflection of a bloody reality. For the past two years, dozens of mothers, fathers, siblings or relatives have been protesting for justice. “Give us our children back!” they cry out on social media platforms and television programs. Sadly, however, the world is blind and deaf when it comes to the cries of the families in southeastern Turkey. The families scream, but no one hears them. I still want to believe humanity is not dead. Those who remain silent should look in the mirror and question their humanity. The indifference to the PKK terror organization’s impact on families must be ended without any ifs and buts.

Families against the HDP

I was in Diyarbakır for weeks, trying to share the pain of the mothers and to convey their feelings. I talked with many of them face to face. The first question in my mind was why they started their sit-in protest in front of the HDP building. I asked each of them individually and was not surprised whatsoever by the responses I received. All of them blamed the HDP in question, saying the party’s members helped the establishment of the connection between the PKK and their children. This claim was widespread, but it had never been conveyed so openly firsthand.

After all my meetings with the families, it was almost certain that those who handed over the children to the PKK were HDP members.

For those who find it hard to believe, let me quote what a grieving mother told me. Her name is Türkan Mutlu. Mutlu was married when she was only 14. She was both subjected to violence by her husband and stepfather for years. She slept in bins of coal, was covered in mud and could not raise her voice. One day, Mutlu risked death and left her husband to establish a new life with her child, Ceylan. Mutlu hoped Ceylan could have a different life. And it was, but even more painful.

Mutlu and Ceylan lived in a house in Istanbul. One day, two people, who were later found to have links to the PKK, came their home to try to reconcile Mutlu with her husband. During the visit, however, Ceylan became the main target of the two people. At the time, Ceylan was counting down the days to go to the Western city of Balıkesir to study sociology at university. Just two days before her school was set to start, Ceylan disappeared, and her mother and siblings were devastated.

Mutlu found out that the two people were also affiliated with the HDP and immediately went to the party’s headquarters but didn’t get any results. Mutlu tried all means to find her beloved daughter. She even traveled to Iraq but returned only with desperation.

Mutlu was unable to cope with the emotional trauma and was hospitalized at a psychiatric hospital four times. Mutlu is now among the Diyarbakır mothers and is determined to find her child.

“My daughter should know that I am searching for her. I know the oppressors will try to prevent you but my dear Ceylan, please come back,” she said. I hope her dear Ceylan will hear the call of her mother, whose tears never cease.

During my research on the matter, I reached out to a man who managed to escape from the PKK, Ekrem Demir. He was a member of the PKK for many years. Ultimately, he regained his freedom and reunited with his family thanks to an escape plan that is unparalleled even in movies. The first question I asked him was how he first crossed paths and met with the PKK. His answer was very clear and detailed.

“I met them through the HDP youth branches, and I was sent by the HDP to Istanbul’s Beyoğlu district building. There I met educated members of the organization. There was a headquarters on the top floor of the building, and we had ideological training there for a week. We chatted and had meetings with members of the organization who came from the mountains but who were educated and worked in the city. We read the books they recommended. After staying there for two weeks, we were sent to Diyarbakır. We again stayed in the HDP building in Diyarbakır. One room of the building belonged to the youth organization of the time. There was an empty room on the ground floor of the building, we were all there. As in Beyoğlu, we were sleeping on the ground. In other words, they were gradually making us accustomed to mountain psychology. Then we went to Cizre (a district in the southeastern city of Şırnak), where we stayed at the HDP building again. From Cizre, we were sent to Syria in a fully organized manner,” Demir said.

When considering such stories, it’s unbelievable to see that those who have had such close connection with the PKK are today occupying the seats of lawmakers in Parliament. Just put yourself in the shoes of the families. Can you imagine what it would mean to you seeing those who stole your child from you sitting comfortably in Parliament? Just think about it.

While talking about children and pain, I also want to talk about whether or not there is a Kurdish problem in Turkey. It’s safe to say there is not a Kurdish problem but a PKK problem – and its political extension, HDP problem. If anyone wants to learn the truth, the voices of the Diyarbakır mothers are enough. By doing that, anyone can learn what the PKK terrorist organization has done to the Kurdish people.

Op-Ed contributor based in Istanbul
RECOMMENDED