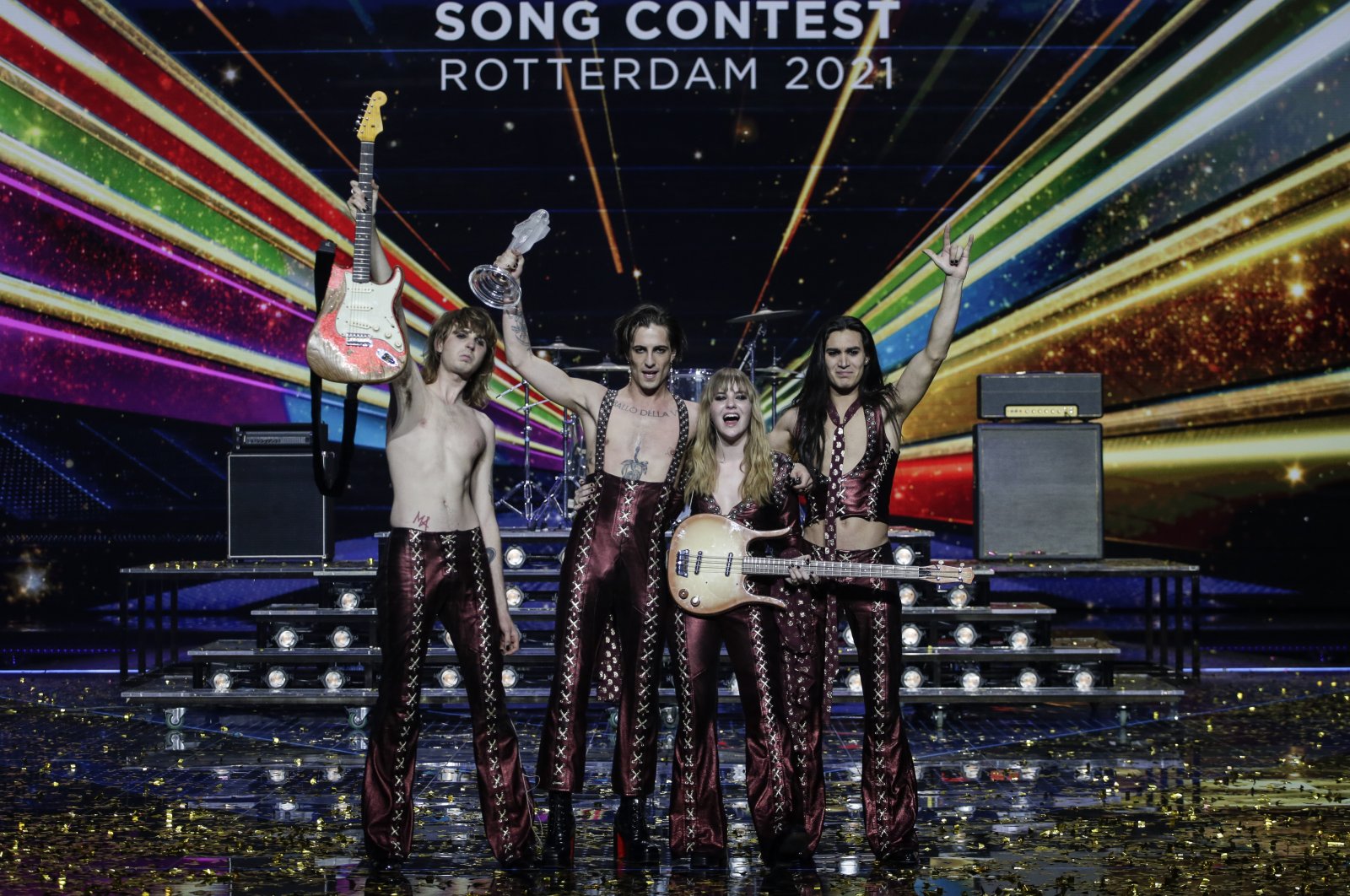 Italy's Maneskin celebrates with the trophy after winning the Grand Final of the Eurovision Song Contest at Ahoy arena in Rotterdam, Netherlands, May 22, 2021. (AP Photo)
by Gökçe Özçiftçi
May 31, 2021 12:05 am

As I watched the 2021 Eurovision Song Contest, many questions came to mind. The first one being: How European is Eurovision? Indeed, when looking at the participating countries, I quickly noticed that a significant number of the states taking part in the show weren't geographically in Europe; thus, is Eurovision promoting Europe?

It wouldn't be totally wrong to say confusion may arise when one looks at the event's panel. This year, countries such as Australia, Israel, Azerbaijan, Russia and Belarus participated in the adventure.

Historically, Eurovision was intended to be a pan-European event celebrating countries all across Europe through music. However, how this organism has evolved doesn't make it pan-European anymore but rather a globalized song contest financed mainly by European countries.

In fact, the "Big Five" constituted by the U.K., France, Germany, Italy and Spain are the most important contributors to the European Broadcasting Union (EBU), which organizes the ceremony each year with the help of the hosting country. In the very beginning, participants were singing in their national languages.

As the years passed, English became the primary language of the songs in the show, and now the contest expands beyond the continent.

Diversity and global participation are today's trends promoted worldwide. In all public or social spheres, we observe the reflections of it. Eurovision, in this context, can be seen as another platform where conservatism is replaced by diverse values.

In addition, whether Eurovision falls victim to daily politics or not is a question that has been asked for many years. It can be said that although the official rules of the event forbid the use of politics in any form, this hasn't been strictly followed.

The voting system illustrates its political implications since it has been criticized many times in the public sphere. The great winner is decided by equal parts national juries and the public. The particular circumstance of my assumption comes precisely from what I, as a viewer, have underlined.

It is a fact that the votes of the public can't be denied. Nevertheless, the choices of the national juries are a bit more problematic. In that sense, 12 points from Greece's national jury went straight ahead to Cyprus and vice-versa. In both instances, the decisions were booed by the audience.

Furthermore, the United Kingdom didn't receive any points from the national juries or the public, which is quite a unique situation. Perhaps Brexit's effect was illustrated this evening by the sulk of Europeans and channeled through Eurovision.

Also, more strikingly, Iceland's representatives displayed a flag of Palestine during the 2019 edition in protest of Israel, which recently targeted civilians with bombardments. Of course, one could elaborate even more about the political impact of the show.

Lastly, when it comes to my title question, the answer is that Eurovision doesn't seem to stimulate European identity anymore; however, changes can be made to reinstitute a shared European "vision." Emphasizing what is genuinely European with less political interference and more neutrality will take us back to the early premises of the show.

Nonetheless, congratulations to Italy, who won this year's edition with Maneskin.

*Op-Ed contributor based in Brussels

Op-Ed contributor based in Brussels