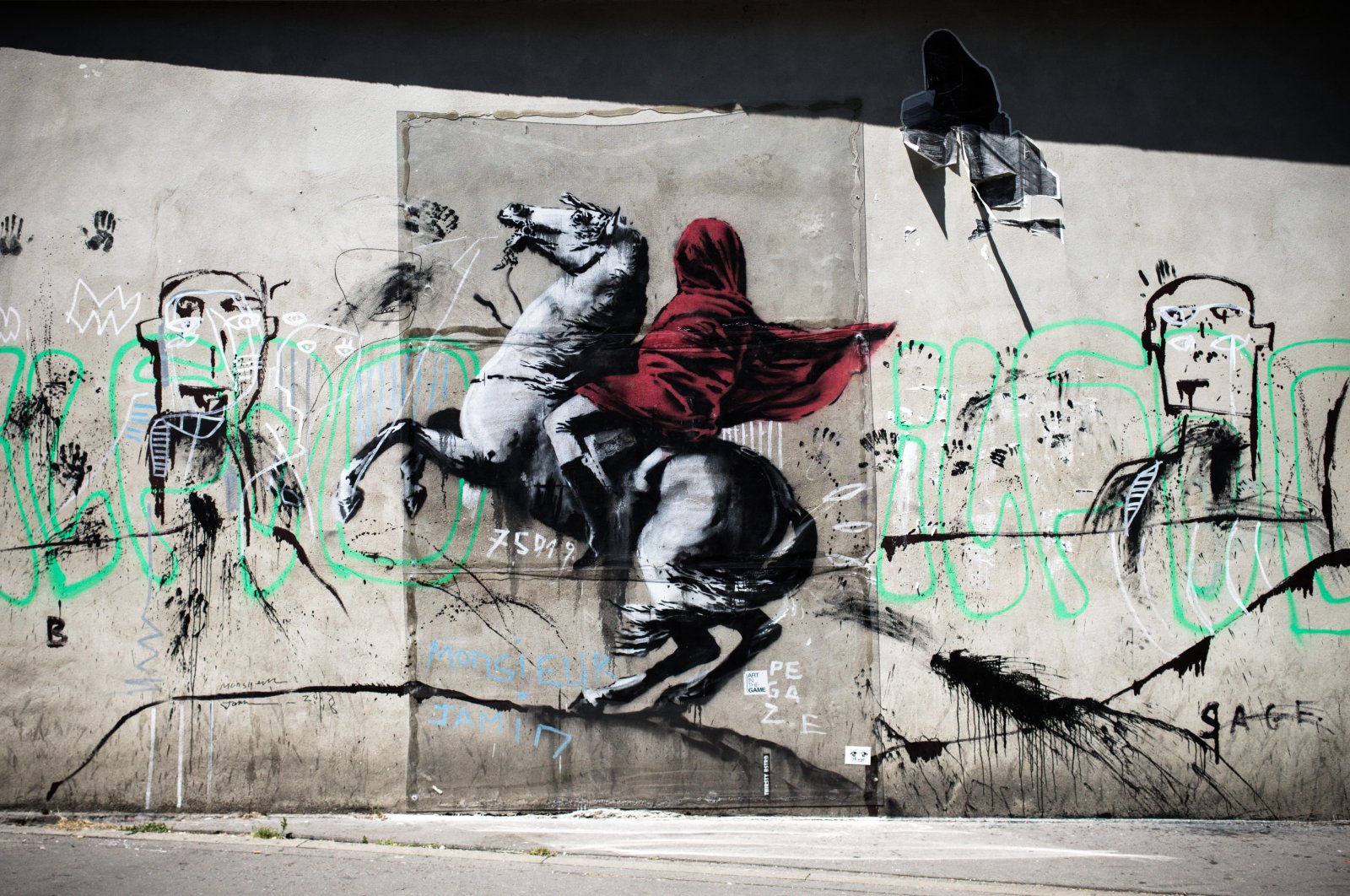 A recent artwork by street artist Banksy of Napoleon Bonaparte wearing a headscarf inspired by the original painting by Jacques-Louis David, Paris, France, June 26, 2018. (Photo by Getty Images)
by Abdennour Toumi Jun 10, 2021 12:05 am

With the ongoing process of headscarf bans flaring up again following a mosque project in France, it seems the country may have lessons to learn from the U.S. regarding multiculturalism

It may seem bizarre that many people in the Middle East and North Africa (MENA) still harbor a strong desire to live in the United States after the country's militarized foreign policy in the region. The "American dream" continued to spread among the dreams of people living in countries destroyed by the U.S. Army and being a U.S. citizen is regarded as one of the most desirable achievements.

The 9/11 attacks, which al-Qaida claimed full responsibility for, was truly a breaking point for the representation of Islam and Muslims in the Western world.

America's incoherent MENA policy for two decades and the harsh approach to migrants under former U.S. President Donald Trump's administration have been justified by pointing to 9/11.

Muslims in the U.S. were stigmatized after 9/11. Most of them were targeted and attacked verbally and physically. This revenge-based attitude of the far-right fringe, and in a limited manner by former Republican presidents, regarding world affairs has pushed the Muslim community in the U.S. to live with the sentiment of guilt through the accusation of guilt.

All these bring us to the ongoing debate about the Mosque of “Discord” in the city of Strasbourg, France. The mega Islamic complex project, which will be the largest in Europe, started a war of words among French right-leaning media and politicians.

A group of four – French President Emmanuel Macron, Darmanin, Minister Delegate for Citizenship Marlene Schiappa and Education Minister Jean-Michel Blanquer – strongly opposed to what they called "Islamic radicalism." Moreover, they say they are fighting against it at every opportunity.

This policy implemented by Macron and his three musketeers is an important point of the far-right party National Rally and his partisans from what is left of the “conventional” right party Republicans (LR).

Following terrorist attacks that occurred in France from January 2015 to the one on April 22, another deadly terrorist attack took place at a police station, with the stabbing of a female police officer in the small city of Rambouillet near Paris.

Politicians in the right and the far-right wings shifted the public policy from being a domestic security issue to a social matter of immigration and national identity after the attacks.

Suddenly, the Islamic complex in eastern France found itself under scrutiny because it is backed by a leading Turkish Muslim organization.

The opposition side accused the municipal officials in Strasbourg, run by a Green Party mayor, of approving a grant of $3.05 million to the Milli Görüş Islamic Confederation (CMIG), a group that represents the Turkish diaspora in Europe.

Whereas, Strasbourg Mayor Jeanne Barseghian said the project started in 2017, and she was elected in May 2020 and the funds presented to the CMIG is a solid financing plan and a confirmation of the Republic’s values.

Nonetheless, Darmanin is not really happy with the fact that the CMIG is one of three Muslim confederations in France that have refused to sign a new anti-extremism charter promoted by Macron.

The "anti-separatism" bill was approved two months ago in the Senate. The new regulations, which were strongly criticized by the left wing, aimed to strengthen "neutrality" at universities and the public by banning the wearing of the veil.

Now deputies and senators will try to find an agreement on a common text in a joint committee (CMP) for the final vote by the parliament.

The French Parliament has also passed a bill into law that would oblige Muslim groups to cut off major foreign funding since religious speech is considered by the new law as hate speech.

"We believe that this association is no longer able to be among the representatives of Islam in France," Darmanin said of the CMIG on BFM television.

In March, Macron warned against Turkish “interference” in France's presidential elections next year, in an interview broadcast by the French TV public network France-5.

Lately, relations between Paris and Ankara, however, have been in high rhetorical tensions over geopolitical issues on Libya, Syria, the Eastern Mediterranean, Nagorno-Karabakh and Islamophobia in France.

An overview of how U.S. federal, state and municipal authorities in this stance acted 11 years ago on the Cordoba House Mosque in New York City (NYC) will help to perfectly answer why many Muslims from the MENA region and people in the world choose to live in America – even though America answered this question 12 years ago when it elected a biracial president who holds a Muslim middle name.

In the summer of 2010, New York approved the construction of then-controversial mosque, Cordoba House, with the courage of the city’s mayor, Michael Bloomberg, who defended the project as a symbol of America’s religious tolerance.

The mayor then understood that the issue is beyond emotional reactions and rejected the suspicions surrounding the 13-story complex soon-to-be located two blocks north of the World Trade Center site.

Even though the world still remembers that dark Tuesday morning of 9/11, which shook the U.S., global geopolitics and international security.

Bloomberg had continued defending the city’s decision by saying, “We would betray our values if we treated Muslims differently than anyone else.”

His declaration, which provides wisdom, stands the exact opposite of Macron and his three musketeers who are preaching to domesticate devoted Muslims in France.

Yet, the tragedy of 9/11 made Muslims adopt a low profile in public life and restricted them from talking freely and proudly about their faith in public.

However, NYC did something phenomenal that academicians failed to do. The city opened a new chapter for rapprochement between Islam and the West, by showing an end to the apocalyptic scenario that Islam will clash with the West.

The scenarios linking Islam to a dystopian ideology, just like French politicians from the right parties RN and LR do by linking terrorism with immigration, had a wide audience in the media during the days of suspicion following the attacks after 9/11.

Seemingly, providing freedom of religion and expression is a better way to fight against the ideology of aversion than forcing people to cultural assimilation and assertion. This type of paradigm will inspire millions of Muslims around the world to embrace and practice tolerance and lead to further understanding.

NYC was right to let the power enter Cordoba House so that the $100 million Islamic center would have a light that illuminates the souls that perished on 9/11 and shines on the new bridge that is progressively healing the tragedy of the past.

Nowadays, France makes everyone feel the way Americans felt on Sept. 12, 2001. The $42 million Islamic complex project in Strasbourg should be considered as a Mosque of "Concord," similar to Cordoba House in NYC, rather than a Mosque of "Discord."

The large majority of devoted Muslims in France and across the West have been explaining vehemently to leaders like Macron that any form of radicalism should be fought through mutual understanding, education and social and political inclusion.