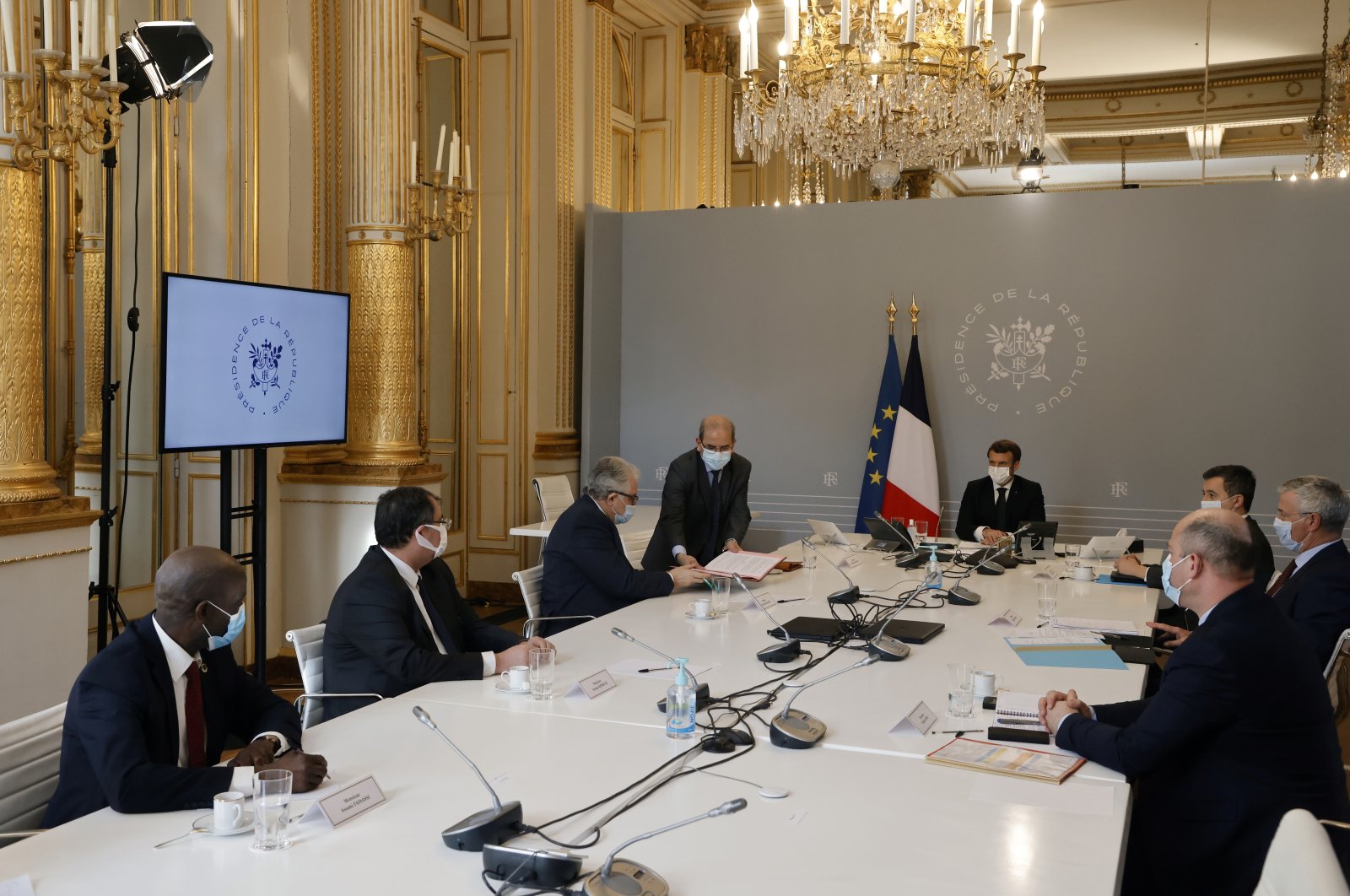 Mohammed Moussaoui (center L), president of the French Council of the Muslim Faith (CFCM), hands over to Paris' Great Mosque rector Chems-Eddine Hafiz the "charter of principles" after signing it next to French President Emmanuel Macron (center R), at the Elysee Palace in Paris, France, Jan. 18, 2021. (Reuters Photo)
by Anadolu Agency Jan 22, 2021 10:53 am
RECOMMENDED

Several organizations of the French Council of the Muslim Faith (CFCM) have unilaterally condemned France's "charter of principles" of Islam, expressing disagreement with the text and saying that it risks "weakening the bonds of trust" and also "undermining the honor of Muslims."

The Coordination Committee of Turkish Muslims in France (CCMTF), the Millî Görüş Islamic Confederation (CMIG) and the Faith and Practice movement announced Wednesday that they have not signed the charter which was approved and presented to French President Emmanuel Macron.

They demanded amendments to the text of the 10-point charter which Macron helmed as a "foundational text for relations between the State, Islam and France."

"We obviously agree with the demand for non-interference by States, the non-instrumentalization of religions and respect for the Constitution and the principles of the Republic," a joint statement said. "However, we believe that certain passages and formulations of the submitted text are likely to weaken the bonds of trust between the Muslims of France and the Nation. In addition, certain statements undermine the honor of Muslims, with an accusatory and marginalizing character."

The rejection of the charter comes as France is engaged in a bitter feud with Muslim countries, including Turkey, over statements and policies made by top French officials following the republication of offensive caricatures of the Prophet Muhammad.

Turkey strongly condemned satirical French magazine Charlie Hebdo's decision to republish cartoons, saying that it “contains disrespect toward (Muslims) and the Prophet Muhammad.” Turkish Foreign spokesperson Hami Aksoy said in September last year that “it is not possible to justify this insult and disrespect toward Muslims by freedom of press, art or expression.” He also criticized Macron’s stance on the matter.

The two NATO allies are at loggerheads over a range of issues including maritime rights in the Eastern Mediterranean, Libya, Syria and the conflict between Armenia and Azerbaijan over occupied Nagorno-Karabakh.

The three groups said the charter was approved without obtaining the full consensus of other integral components of the CFCM, including the regional and departmental councils and imams who will be affected by the decision. It cited that the Great Mosque of Saint Denis de la Reunion, which is one of the founding components of the CFCM, has refused to sign this charter.

After weeks of internal disagreements, the CFCM, a national body of nine associations – said it reached an agreement on the text of the charter "rejecting foreign interference, political Islam, and certain customary practices and on respecting gender equality."

The agreement would pave the way for the formation of the National Council of Imams which will have powers to authorize the practice of imams.

The council will curb the entry of imams from Turkey, Tunisia, Morocco and Algeria, and 300 imams may be expelled, according to a report published by the France 24 news outlet.

The three organizations said that although they are convinced that the imam's council is beneficial, it should derive its legitimacy from the Muslim population. They underlined the need for "a broad, democratic and participatory consultation" instead of customarily signing the text that the "community cannot calmly accept."