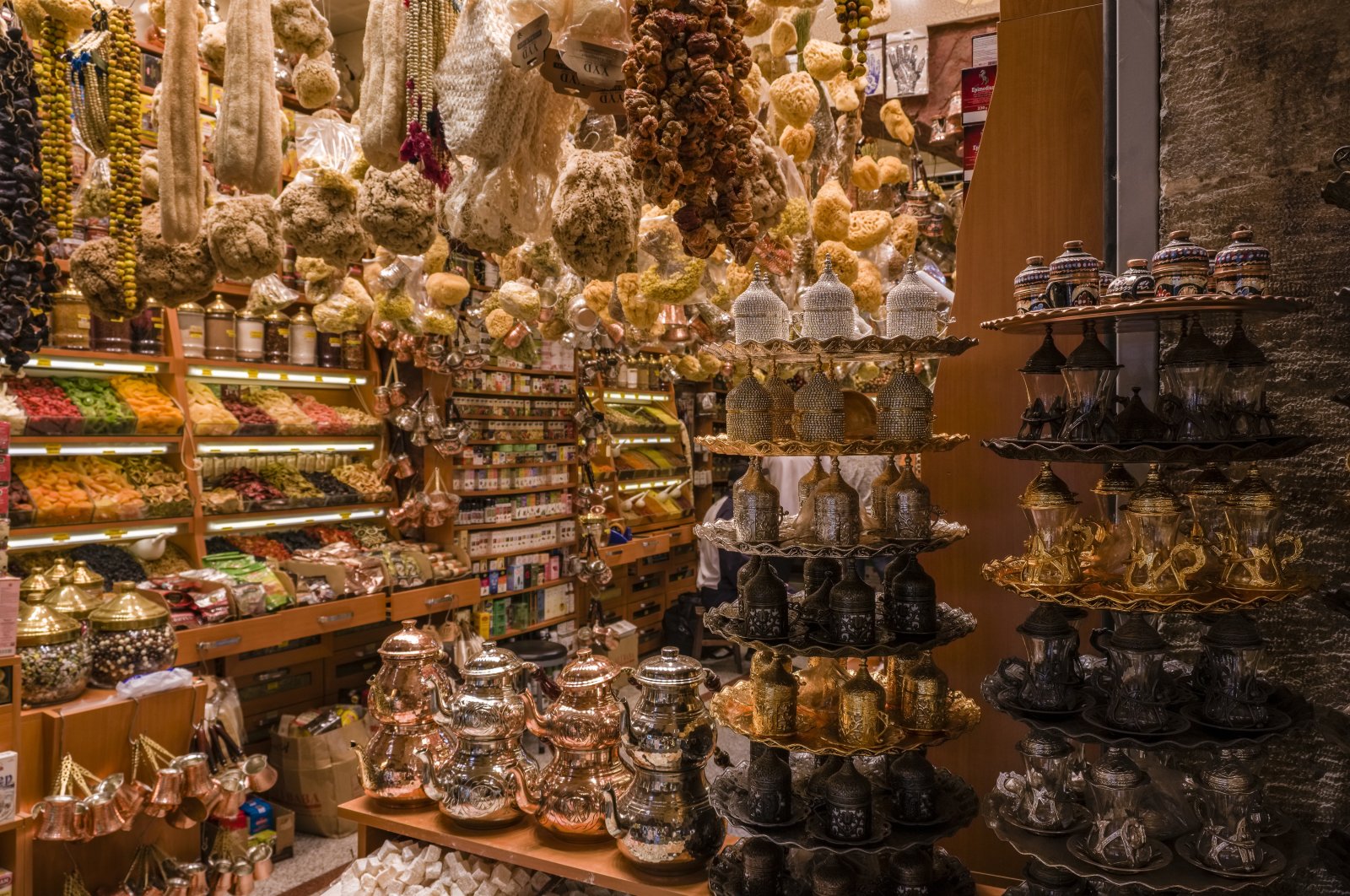 Big variety of spices, tea dishes and kitchen accessories are seen at a shop inside Spice Bazaar, Istanbul, Turkey, Oct. 15, 2019. (Photo by Getty Images)
by İpek Tekdemir Apr 12, 2021 12:05 am
RECOMMENDED

Let me make a frank start for all of us. Hard news is what consumes our motivation and energy during the daytime. In our contemporary moments, everyone seeks an alternative to the turbulence of politics, but most also aim to remain engaged; in other words, we often seek an option that adds a bit of joy while keeping up with realpolitik as well. This search for a balance is not only undertaken by ordinary users of social media, academics or media members but also diplomats, who are positioned at the very center of hard politics.

Merriam-Webster defines “diplomacy” as “the art and practice of conducting negotiations between nations” or “skill in handling affairs without arousing hostility” and the “diplomat” as the “practitioner” of it. Most probably, negotiating with someone is a hard thing to do and, when it comes to states, it is the hardest. First, you have to be well qualified with practical communication skills, have a peaceful approach and be pleasant as well.

In order to strengthen bilateral ties between states, economics, trade, security or energy play are often determinant factors. However, before that, there is a much more determinant factor whose absence can directly block even basic discussions. Without a doubt, it is communication.

With the end of bipolarity and bloc politics in the world, diplomatic communication has undergone major changes as softer correspondence has replaced traditional negotiation forms where parties used to corner themselves through hard talks.

Lately, nevertheless, it was observed that negotiations conducted with softer agendas were much more successful in dealing with transnational developments, such as humanitarian crises, political deadlocks, etc. What is ironic is as softer diplomatic initiatives were adopted, the larger crises were also solved, or at least saw hope for a solution.

In this context, for diplomacy, many subcategories or subheadings subsequently emerged to meet the requirements, which were brought to the agenda due to modernity. Times changed and so did traditional diplomacy.

It was spurred on not by a need to escape from hard politics but by a more practical and useful tendency to challenge global crises such as climate change, the war on terror, lack of access to education or gender-based discrimination and violence.

For example, cultural diplomacy took the helm of the wave of what we can call “new diplomacy.” The more countries witnessed improvement in cross-cultural interactions, the more they gravitated toward new diplomacy.

Take the example of culinary diplomacy or gastro-diplomacy, whose primary goal is to ensure the better promotion of harmony in cultures. With traditional, contemporary or fusion cuisine, diplomats used their countries’ culinary heritage numerous times and saw the positive reactions and feedback it immediately yielded.

It is simple: Food brings people together, whether at family dinners or diplomatic round tables. Particularly when accompanied by warm hospitality, food can become a powerful and tremendously effective instrument in a diplomatic meeting.

Remember how Turkish Foreign Minister Mevlüt Çavuşoğlu and his then-German counterpart Sigmar Gabriel issued significant messages for bilateral relations in a very warm meeting on Jan. 6, 2018, where both enjoyed a delicious Turkish tea?

Gabriel’s use of a traditional teapot found in almost every Turkish home was likely what melted the ice between the two diplomats. At that time, the two countries’ relations were at their lowest level.

In Turkey, home to endless dishes from different cuisines, such as Mesopotamian, Anatolian, Turkic, Byzantine and Mediterranean, the kitchen is used as a tool to charm foreign delegations.

Whenever a high-level meeting is organized, the dishes from the Turkish culinary heritage – particularly from the menus of the Ottoman Imperial Palace – are served to counterparts.

Believe me, no foreign official has ever left the country due to disliking the hospitality and meals.

To give another example from a different part of the world, South Korean Culture Minister Hwang Hee recently stated that their government is planning to launch initiatives for the promotion of the Korean culinary heritage, including traditional "kimchi" in particular, around the world.

His statements were broadcast on media at a time when the cultural quarrel between Korea and China had resumed at full speed, giving a plain and simple diplomatic message to his counterparts.

It is not an exaggeration to assume Hwang saw the power of culinary diplomacy in negotiations.

To make a long story short, hard politics are cumbersome during crises. To build mutual trust, ensure sincerity and understand one another, more states should try the new diplomacy and see the power of it. Culinary diplomacy, in this context, could be a good start.