Golan Heights: No one trusts Biden and they're right not to 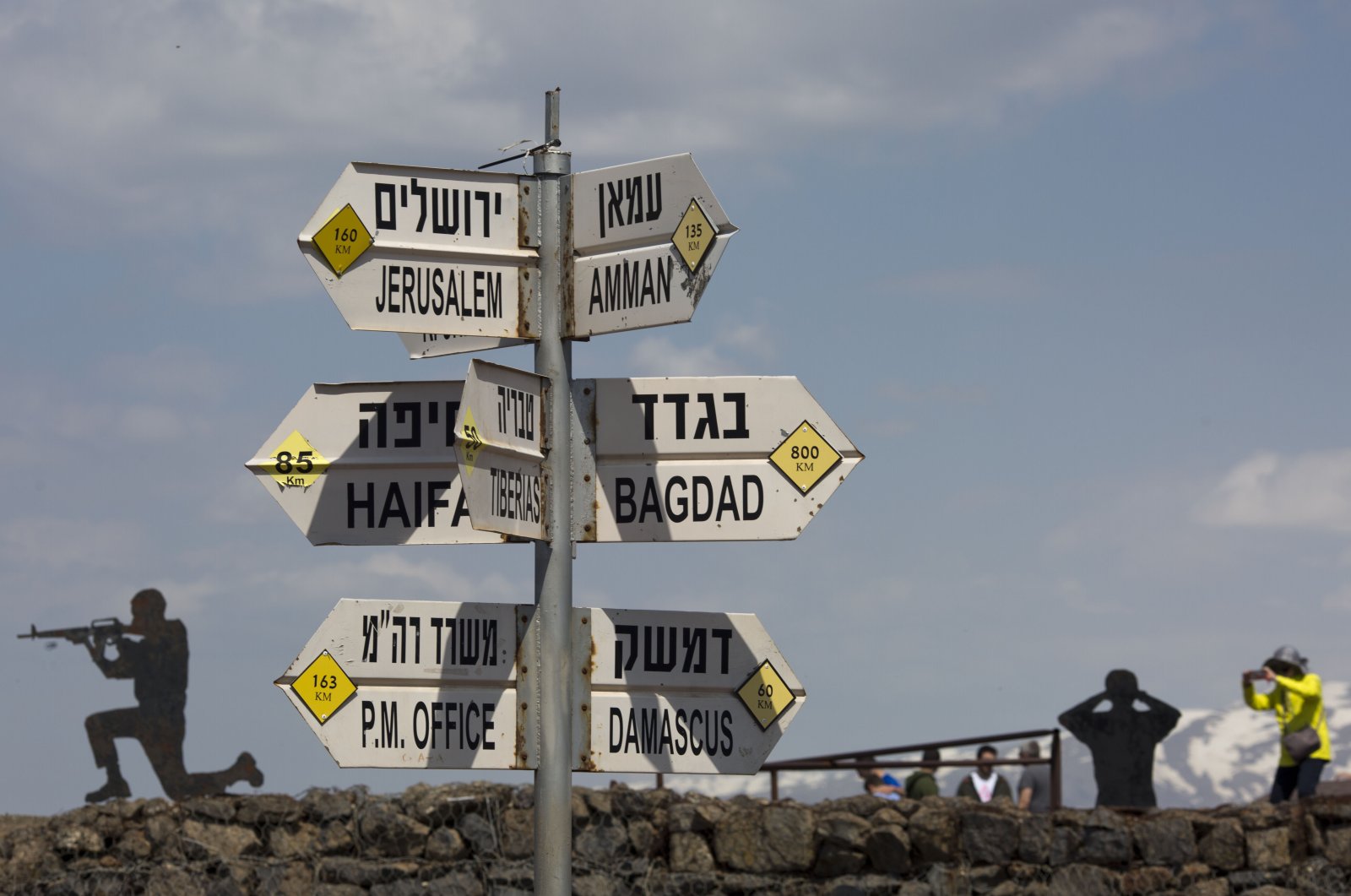 People take photographs next to a mock road sign pointing to Damascus, the capital of Syria, and other cities at an old outpost in the Israeli controlled Golan Heights near the border with Syria, March 22, 2019. (AP Photo)
by Najla M. Shahwan Oct 26, 2021 12:05 am

The U.S. president has chosen to follow Donald Trump's footsteps in the Golan Heights and has thus ruined his regional reputation and reliability

Israel is determined to keep the Golan Heights region it captured from Syria in a 1967 war, even if international perceptions of Damascus change. "The Golan Heights is Israeli, full stop," Israeli Prime Minister Naftali Bennett recently said while addressing a conference about the territory's future.

In his speech, Bennett also pledged to double the size of the Israeli population in the Golan, which is currently about equal to the Druze community (an Arabic-speaking ethnoreligious group originating in Western Asia) that often professes loyalty to Syria.

Israel seized the Golan Heights from Syria in the closing stages of the 1967 Six-Day War and formally annexed it in 1981, a move not recognized internationally.

Most of the Syrian inhabitants of the territory left the region (some spontaneously, some forced by Israeli forces) and the remaining population was made up of the Druze minority.

Immediately after the occupation, the Israeli government started to build several settlements in the Golan Heights, where a significant portion of the Jewish population then moved.

Most of these settlements were established primarily while the Israeli Labor Party, commonly known as HaAvoda, was in power. The settlements have been nurtured and strengthened by every Israeli government since 1967.

These settlements are a reflection of the government’s determination to retain the area. In an interview with the Davar daily in 1974, late Israeli Prime Minister Yitzhak Rabin expressed that "even under a peace treaty, the Golan Heights should be within Israel’s jurisdiction. I stress: the Golan Heights." This statement came as Israeli Foreign Minister Moshe Dayan declared that Israel would have to stay in the Golan Heights and “to stay means including Israeli settlements there.”

Today, around 21,000 Israeli settlers live in the 33 settlements in the occupied Syrian Golan as Israel plans to double the number of residents in the strategic Heights, the border region spanning about 1,800 square kilometers (695 square miles). Bennett announced that he plans to build two more settlements in the disputed area the U.N. considers part of Syria. "The Golan Heights is a strategic goal. Doubling the communities in it is a goal of the government of Israel," he said.

As expressed by Bennett, Tel Aviv is expected to roll out a national plan for the area. According to media reports, the plan is expected to be approved in at least six weeks during a Cabinet meeting. Bennett stated that he plans to quadruple the Israeli settler population in the Golan Heights, from 27,000 to 50,000, and then eventually increase it to 100,000 settlers.

"The development of the Golan is in (Israel's) national interest," he said. "It is not enough to say. 'The people are with the Golan.' The government also has to support the Golan ... Our goal is to double, and double again, the number of residents in the Golan Heights," he noted. The Israeli government plans to establish two new communities in the Golan that would also provide employment opportunities and ramp up infrastructure investments in the region.

Syria launched a failed attempt to take back the Golan Heights during the Yom Kippur War, also known as the 1973 Arab-Israeli War, which ended with an armistice agreement both countries signed in 1974. A U.N. observer force has been in place on the cease-fire line since then.

Resolution 497 adopted by the U.N. Security Council (UNSC) at its 2,319th meeting on Dec. 17, 1981 decided that "the Israeli decision to impose its laws, jurisdiction and administration in the occupied Syrian Golan Heights is null and void, and without international legal effect." The U.N. General Assembly (UNGA) repeatedly reaffirmed that "all legislative and administrative measures taken or to be taken by Israel, the occupying power, that purport to alter the character and legal status of the occupied Syrian Golan are null and void." Most recently in the UNGA, Syria requested a full Israeli withdrawal to the pre-1967 border and the return of the Golan Heights as part of any peace deal.

The Golan Heights is one of the most strategic pieces of land in the Middle East. Its location at the confluence of Syria, Israel, Lebanon and Jordan makes it a natural flashpoint. However, it is the area's elevation that makes it so sought after. The rocky plateau has an average elevation of 1,000 meters (3,280 feet). Mount Hermon, its highest point, towers 2,800 meters over the surrounding area. The area is also a key source of water for an arid region. The rainwater from the Golan's catchment feeds into the Jordan River.

Prior to 1967, more than 140,000 Syrians lived in the Golan but today, the population is made up of around 22,000 Druze. Many still have relatives on the Syrian side of the fortified boundary. The heights give Israel an excellent vantage point for monitoring Syrian movements and the topography provides a natural buffer against any military thrust from Syria. The land is fertile, and the volcanic soil is used to cultivate vineyards and orchards and raise cattle. The Golan is also home to Israel's only ski resort.

What is the U.S. position?

While the U.N. has not recognized the occupation of the Syrian Golan Heights by Israel, former U.S. President Trump officially recognized Israeli sovereignty over the Golan Heights, thus straying from a significant portion of the international community in terms of policy.

On his part, former Israeli Prime Minister Benjamin Netanyahu welcomed the U.S. decision and affirmed that Israel "shall never give up" as it "won the Golan Heights in a just war of self-defense and the Jewish people's roots in the Golan go back thousands of years." The vast majority of the international community condemned the U.S. decision and a spokesperson for the United Nations Secretary-General Antonio Guterres has reiterated that the status of the Golan Heights has not changed.

Bennett's recent remarks came as the current U.S. administration waffled on the Golan's legal status and some U.S.-allied Arab states ease their shunning of Syria's Bashar Assad over his handling of a decade-old civil war.

U.S. President Joe Biden's administration, on the other hand, has been increasingly circumspect on the Golan issue, describing Israel's hold in de facto rather than de jure terms. U.S. Secretary of State Antony Blinken cast doubt over Washington’s recognition of the Israeli sovereignty in the Golan Heights saying that, under current conditions, he supports Israel controlling the Golan Heights, but appeared to question the legality of the Trump administration’s decision regarding the strategic plateau.

“The Golan is very important to Israel’s security,” Blinken said in an interview with CNN in February. But "legal questions are something else. And over time, if the situation were to change in Syria, that’s something we’d look at." During his interview, Blinken was asked if the Biden administration would continue to “see the Golan Heights as part of Israel." "Look, leaving aside the legalities of that question, as a practical matter, the Golan is very important to Israel’s security," the U.S. top diplomat said.

“As long as Assad is in power in Syria, as long as Iran is present in Syria, militia groups backed by Iran, the Assad regime itself – all of these pose a significant security threat to Israel, and as a practical matter, the control of the Golan in that situation I think remains of real importance to Israel’s security,” Blinken also added. His words indicated that the U.S.could be open to reexamining that position in the future.

The U.S.'s regional position also appeared in the media several other times. For example, in June, the U.S. ambassador to the United Nations, Linda Thomas-Greenfield, said that Biden has not changed Trump's Golan Heights decision but is still working on the issue. When asked about Trump’s move, Thomas-Greenfield said that the recognition remains a U.S. policy.

The UNSC resolutions recognize the territory as Syrian and occupied by Israel. Since Biden took office in January, he did not reverse any of Trump’s change to longstanding U.S. policies in the Middle East. He is not ready to rescind the recognition of Golan Israeli sovereignty. He has no plans for any sort of peace conference, or even a peace process in the region anytime soon. The matter is simply not a priority and will not be on his agenda as Israel continues to illegally grab more lands in the occupied Palestinian territories, control the Golan Heights and design its own boarders according to its own interests in the name of security, disregarding the U.N., the U.S. and the whole international community.