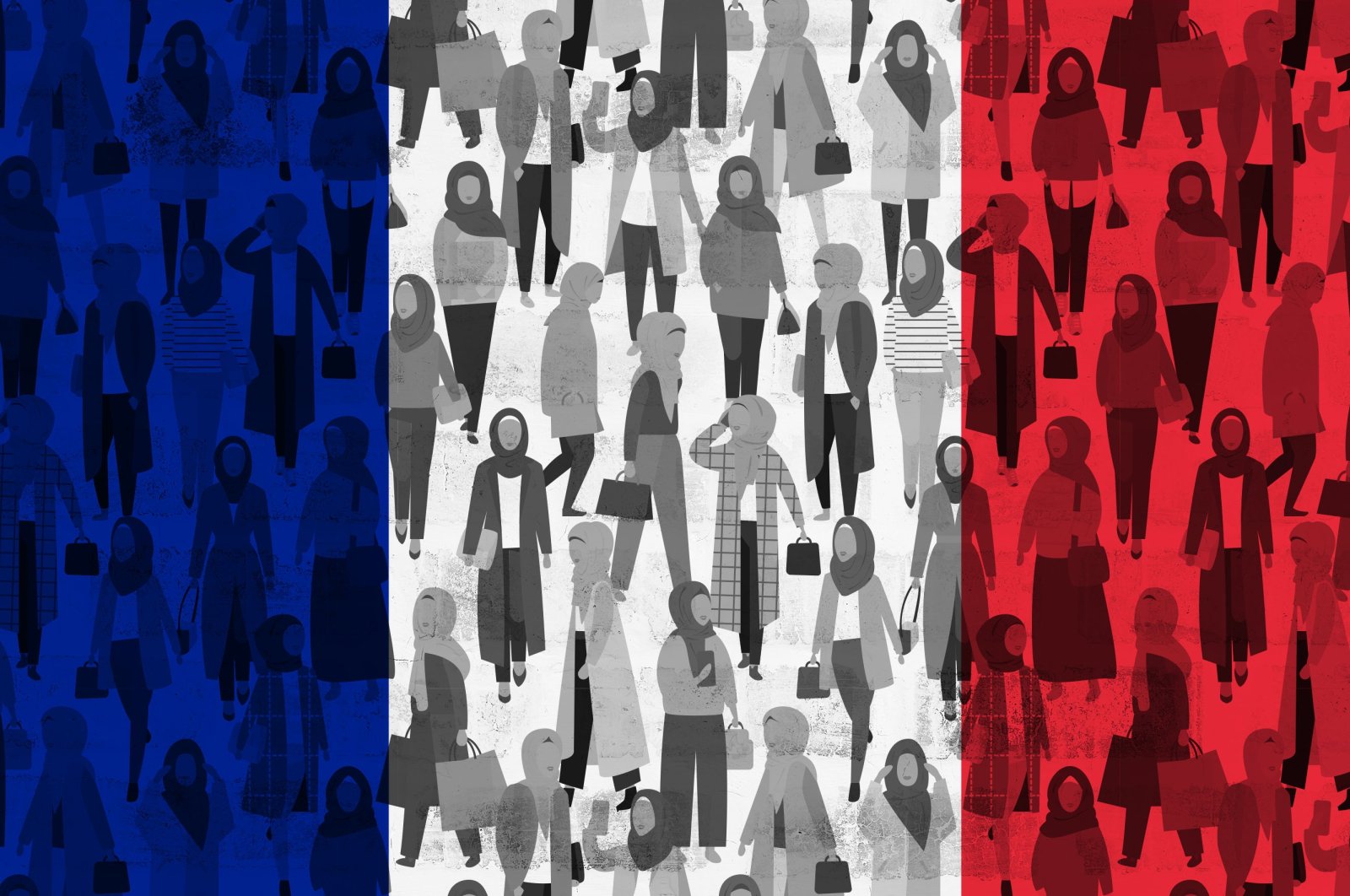 Over the course of decades, the thorny question of the Islamic headscarf in France has escalated into a political debate. The topic took hold in 1989 when a junior high school principal told three Muslim teenagers of Moroccan descent that they could not attend school in Creil in the Oise department in northern France if they insisted on wearing the headscarf. It was argued that the headscarf was against the French Republic's laicism values. In the same year, there was a societal shift on the complex question of the relation between the politicians and the media with the Muslim immigrants. It was a question that shifted from its ethnic conceptualization to religious mischaracterization.

A discourse centered on the clothing of Muslim women became the center of attention, involving everyone from French politicians, media to the elite. Some claimed that Muslim women are forced to cover their heads by their male family members and therefore needed to be liberated. Suggestions followed one after the other and as a result, subsequent governments were faced with the unprecedented task of solving the issue facing the laic education system. The case’s political dimension opened a chronicle debate about Muslim immigration and questions of social behavior such as the integration of Muslim girls with immigrant heritage or assimilation issues. The debates later became a great political tool for failed politicians to expand their audience locally in every election. In the upcoming presidential votes, the debate still has a place in some candidates’ agenda to win the votes of “white” fellow citizens.

According to French media reports, there are about 2,000 women with headscarves in France, and many of them are Caucasians or French natives converted to Islam. Since 2009, a bill has been passed in the French Parliament relating to this, however, questions remain over how it will be reinforced. How will the immigration and security issues be discussed in light of the French Republic’s national motto, “liberty, equality, fraternity?"

French Interior Minister Gerald Darmanin, just like former President Francois Hollande’s Prime Minister Manuel Valls, is now trying to “domesticate” devoted Muslims in France. Like Valls, Darmanin is of the opinion that Islam in France is not laic enough. That’s why, he brought a highly controversial anti-Muslim law to the government’s agenda, which sparked outrage among the heterogeneous Muslim community. According to the law, the headscarf must be banned in universities since a majority of French people thinks Islam is incompatible with the republic’s values.

Taking into consideration the fact that French President Emmanuel Macron has been under pressure over the yellow vests protests and the mismanagement of the coronavirus crisis for a long time, the question of headscarves is more than just an electoral agenda. The apparent aim of the matter is to ban the headscarf in universities similar to its ban in public administration offices. For instance, Muslim women, who work in the French public administration like city halls, are supposed to take off their headscarves inside the building.

In October 2019, French far-right lawmaker Julien Odoul asked the president of the Burgundy Franche-Comte region to ask a woman, who was on a school field trip with pupils visiting the region’s political buildings, to remove her headscarf. Odoul said, “We are in a public building, we are in a democratic enclosure ... in the name of our republican principles, I ask you to ask this person to remove her headscarf, it is the Republic and it is laic.”

In another example, in September 2020, French members of the parliament from the political parties including Macron’s LaREM party refused to speak to Maryam Pougetoux, the then-president of the National Union of Students of France (UNEF) section of Sorbonne University, “because of her Islamic headscarf” in a session in the French Parliament building. In January 2019, Pougetoux was also targeted by then-Interior Minister Gerard Collomb for wearing a headscarf.

Recently, Macron’s education minister wanted to ban headscarf-wearing mothers and caretakers to keep them away from the sidewalks and gates of schools when they came to pick up their children. It is, however, authorized to be worn by Muslim women employed as cleaners of city hall offices, trains, metro stations hallways, grocery stores and shopping malls.

Nevertheless, the question of the headscarf puts one’s freedom of expression in doubt and clashes with the arguments of the laic and feminist circles, who don't want a puritanical ideology taking advantage of the French Republic's hospitality and freedom. Has the concept of French laicism changed? This brings us to the complex question of the youth, immigration and identity in the West in general.

To better understand this social phenomenon, the history of the Islamic headscarf in public spaces and how it has changed in recent times should be considered. For some, the headscarf is interpreted as a religious awakening, while others consider it a practical matter based on religious codes. Whereas, in France, the question of the headscarf is also about the affirmation of identity with a certain society that the devoted Muslim women are intellectually and socially well integrated into but not in the way others want them to be.

Consequently, the dialectic equation of "we versus the others" is here to stay. It’s like the rooted debate between pious and liberal feminist fronts for decades in Muslim countries such as Algeria and Tunisia.

In Algeria, in the 1960s, when an Algerian woman dressed in Western clothing, she was called “civilized.” Traditionalist women wore an elegant white silk cloth called “haik,” which Tunisian women, who wore the same cloth called “safseri.” Both the haik and the safseri were linked to the local culture and traditional dress rather than to religion or expression. In other words, it was an identity affirmation similar to the headscarf being worn by many young Muslim girls in France today. Today this traditionalist clothing in Algeria and Tunisia has become old-fashioned.

Nowadays, one sees more young women than 30 years ago wearing headscarves on the streets and at Algerian and Tunisian universities. Essentially, the mothers of today’s women wearing headscarves in Algeria and Tunisia were differentiated as civilized or traditionalist while now they’re called religiously devoted or neo-feminist conservatives.

The manifestation of the headscarf, in general, is not about conformism. Yet, one should look at the question as a reaction to the rejection of devoted Muslim immigrants in Europe, and France in particular. The question needs a constructive debate that is not overshadowed by political games, ethnic amalgams and segmentation.

After all, it is an invasion of privacy and targets freedom of expression. France is en route to becoming the top xenophobic country in Europe as French politicians and media use it for political gains. The question is very problematic and is dividing the politicians and the voters in the country and the rest of Europe as well. The dangerous scenario is that Macron’s government will continue acting indifferent to Muslim votes assuming that they won't participate in the elections. If they show up to the polls, their vote will be divided between the main candidates in the first round.

In sum, the dynamic of the upcoming presidential election is changing the entire nature of the French fifth republic politics. The Muslim vote could be a game-changer for a presidential candidate, depending on his/her public policy regarding Islam. But, in order for this to happen, the policy should be discussed with credible Muslim organizations but not with the mainstream leaders of the Muslim communities for further “domestication” of devoted Muslims in France. Just like the right-wing racist and rejectionist politicians and voters, Macron embraces the intellectual delirium pattern for the clash of civilizations – a storyline that plays out favorably either way into the hands of the dystopian circles on both sides.