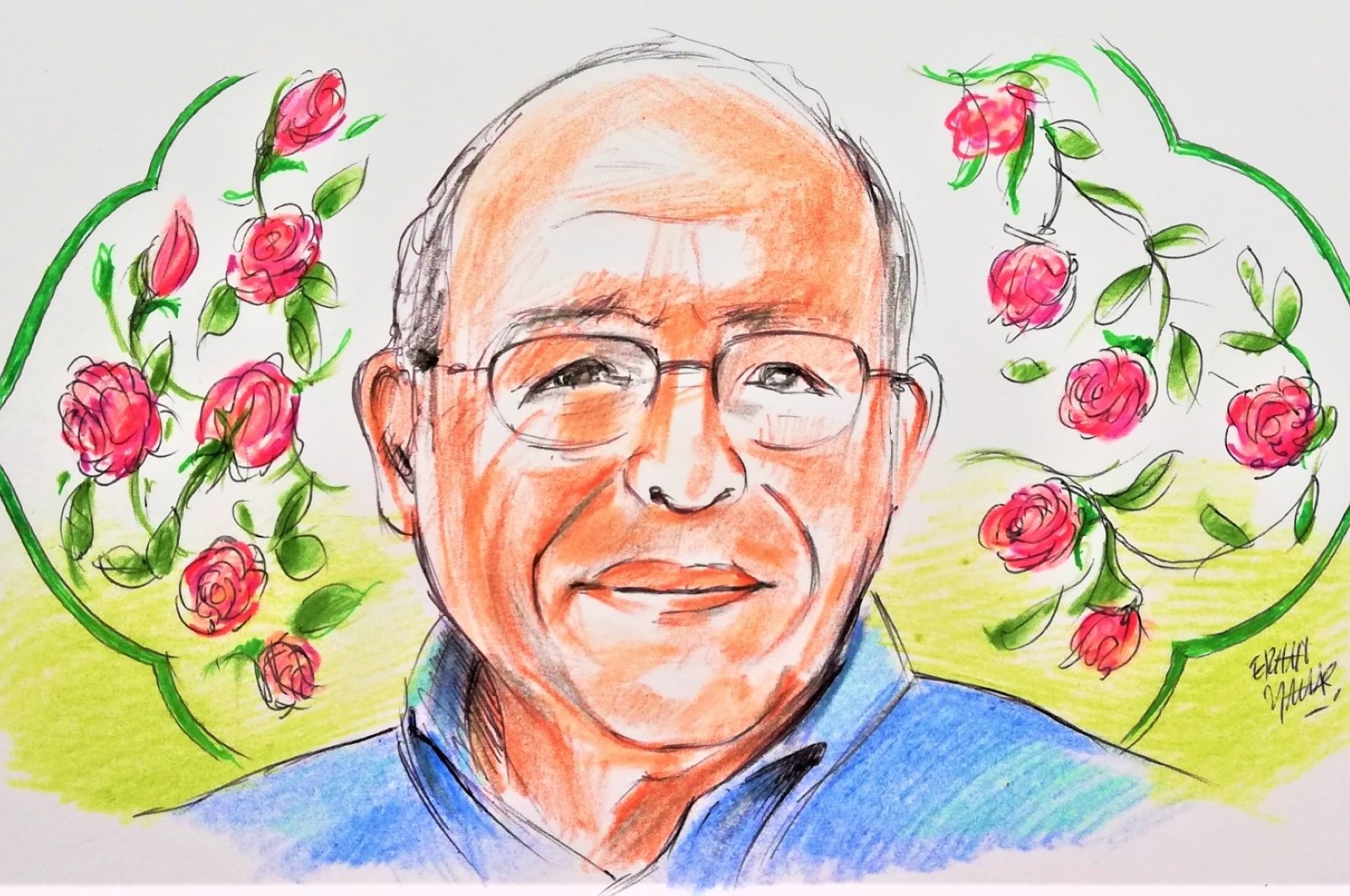 What an unforgettable and sorrowful day it was. I was with him in the car when professor Ahmet Haluk Dursun, then Deputy Minister of Culture and Tourism, was killed in the crash in the eastern Van province’s Erciş district on Aug. 19, 2019.

Dursun was an idealist and dedicated to the country's cultural development. It was a real honor for me to be his assistant.

He will be remembered as a man with a mission who believed in a cultural ideal for Turkey.

As an academic and a bureaucrat, Dursun always said "the youth is the one who would lead the country's cultural developments" to me and Töre Üst, his other assistant and my colleague, who also lost her life in the same crash, succumbing to her injuries two months after the horrible incident. May God bless them both.

Dursun was always on the road in Turkey's southeastern region to better introduce the region's historical and cultural heritage as part of "Anatolian Historical and Cultural Union." A historic, difficult yet inspiring mission with youth taking centerstage.

Born in the Hereke district of the northwestern Kocaeli province in 1957, Dursun devoted his life to raising awareness about Turkish culture and history, contributing to the cumulative cultural knowledge and passing it down from generation to generation.

He started his academic career at the department of last age and history of the Republic of Turkey at Istanbul University. He received both his master's degree and Ph.D. from Marmara University and his doctorate title from the university's department of contemporary history.

He gave lectures on a number of topics, including founding leader Mustafa Kemal Atatürk's principles and the history of the Turkish revolution, the political, cultural, civilization history of the Ottoman Empire and Turkey, the history of Byzantine and Europe, the historical places of Istanbul and the role of museums in teaching history.

Dursun is commonly known for his studies on the cultural richness and political history of the Ottoman geography and Istanbul's history, architecture, culture and arts.

His seminar, titled "Our Political and Cultural Presence in the Balkans," at the diplomacy academy of the Foreign Ministry was also closely followed.

In addition, he was a consultant in the preparation of the "Miniatürk project." His extensive restoration works in Hagia Sophia and the conservation/repair works of Ottoman artifacts in and around the historic structure were significant.

The late Turkish bureaucrat gave lessons on the Hagia Sophia at Topkapı Palace and continued the publication of the famous Müze (Museum) magazine after a 17-year break.

In the holy month of Ramadan, he used to organize traditional events and in the month of Muharram, his Ashura programs at the palace’s sacred relics section were a call for social unity.

"The culture of death is significant to pay attention to," he used to say while explaining why he insisted on opening the Ottoman sultans’ tombs to visitors.

During his term as the deputy minister in the Culture and Tourism Ministry, he personally conducted the project titled “City-Human Civilization Bridge: The Project for Exemplary Personalities.”

Dursun helped found the "Directorate of Battle of Gallipoli and History of Gallipoli." When a fire broke out in the historical Gallipoli area during the Eid al-Adha some years ago, Dursun immediately went to the region and planned what the ministry and presidency could do to restore the region.

In 1989, Dursun received the Press Expertise Award from the Istanbul Chamber of Architects for a series of articles entitled “Elveda Boğaziçi” (Farewell to Bosporus). In 2002, he was awarded by the Turkish Writers’ Union for his book “Nil’den Tuna’ya” (From the Nile to the Danube).

In 2010, Dursun was awarded the annual "Premio Rotondi ai salvatori dell'Arte" (Rotondi Prize 2010: Savior of the Art) for his works on the Hagia Sophia.

He also consulted on documentaries such as “Tuna” (The Danube), “Evliya Çelebi Hac Yolunda” (Evliya Çelebi on Road to Pilgrimage) and “Mimar Sinan: The Architect.”

What is the union mission?

Dursun formed a "Anatolian Historical and Cultural Union," which aimed to ensure, strengthen and reinforce unity, solidarity and brotherhood in Anatolia.

In a workshop speech in central Sivas, he said “we consider that the core of the Turkish Republic is culture. It is very open to debate the degree to which this culture has been valued, revived and reerected.” That is the main theme of that union.

“As the Ministry of Culture and Tourism, we are not engaged in a discussion about this job, but interested in the service aspect. We have taken it upon ourselves to do this. Since we believe that we need to embark on a new struggle for national culture, and we consider it a necessity, we, the Culture and Tourism Ministry, have taken on the responsibility and built a new structure under the name of the meetings of 'the Anatolian Historical and Cultural Union.' We have come together to find young people who can be the leaders of the world of culture, to commune with them, to deal with them one-on-one, to share our knowledge with them and to hand over the legacy to them in due time.”

Pointing out that young people will have a say from now on, Dursun stated: “We started it in Çanakkale to mark the spirit of Dardanelles. Then we went to Diyarbakır, Mardin, Şırnak and met with the young people there. One side of this work is history, and the other side is Anatolia."

In every city that we visited to host workshops, he held programs titled “Alone with the Young People” and city tours.

In a speech at the Faculty of Law in the Dicle University in southeastern Diyarbakır a few years ago, Dursun talked about a memory that triggered the Anatolian project:

“A young student girl asked for permission to speak, and said: ‘What are you doing here? I have looked at your work, you are a historian on the Danube, you have spent your life on the Danube. Your second book is about the Nile. You have also worked on the Nile. There is no Tigris in your life. You are a historian without Tigris, so you have no right to be here, no right to speak,’ in a highly opponent and excited manner. All academic titles were going one way, of course. And I replied: ‘Okay, wait, you are right, but listen. Where are we delivering this speech? At the Dicle University. The Tigris passes through the campus. Where have I come from? I have come from Cizre which is completely a city of the Tigris. I was in Hasankeyf the day before. The Tigris comes from Batman. I mean, our eyes are on the Tigris, but our hearts are on the Danube. There is no harm in it and no shame, but you are right, we are late. After all, every job and every mission has a time left hostage. This is that very time and now I am with you guys in the Tigris today.’ Then I showed, all the young people strike sparks off each other. You are the beloved of the Tigris and you are entrusted to us. You are right, we are late to embrace this trust, but from now on we will be with you, and we will not lose the beloved of the Tigris, Murat, Karasu, Great Zab and Aras to foxes in this region.’ To avoid losing them to foxes, we have to deal with them, share their burdens and be together with them.”

Dursun emphasized that cultural development was essential in having friendly geography and passed away in a region, where he aspired to work for this cause.

For me, he is an irreplaceable academic and bureaucrat. It was an honor to work with him. May Dursun and his assistant, my colleague Üst rest in peace.