Is there a hope for French-Algerian relations? 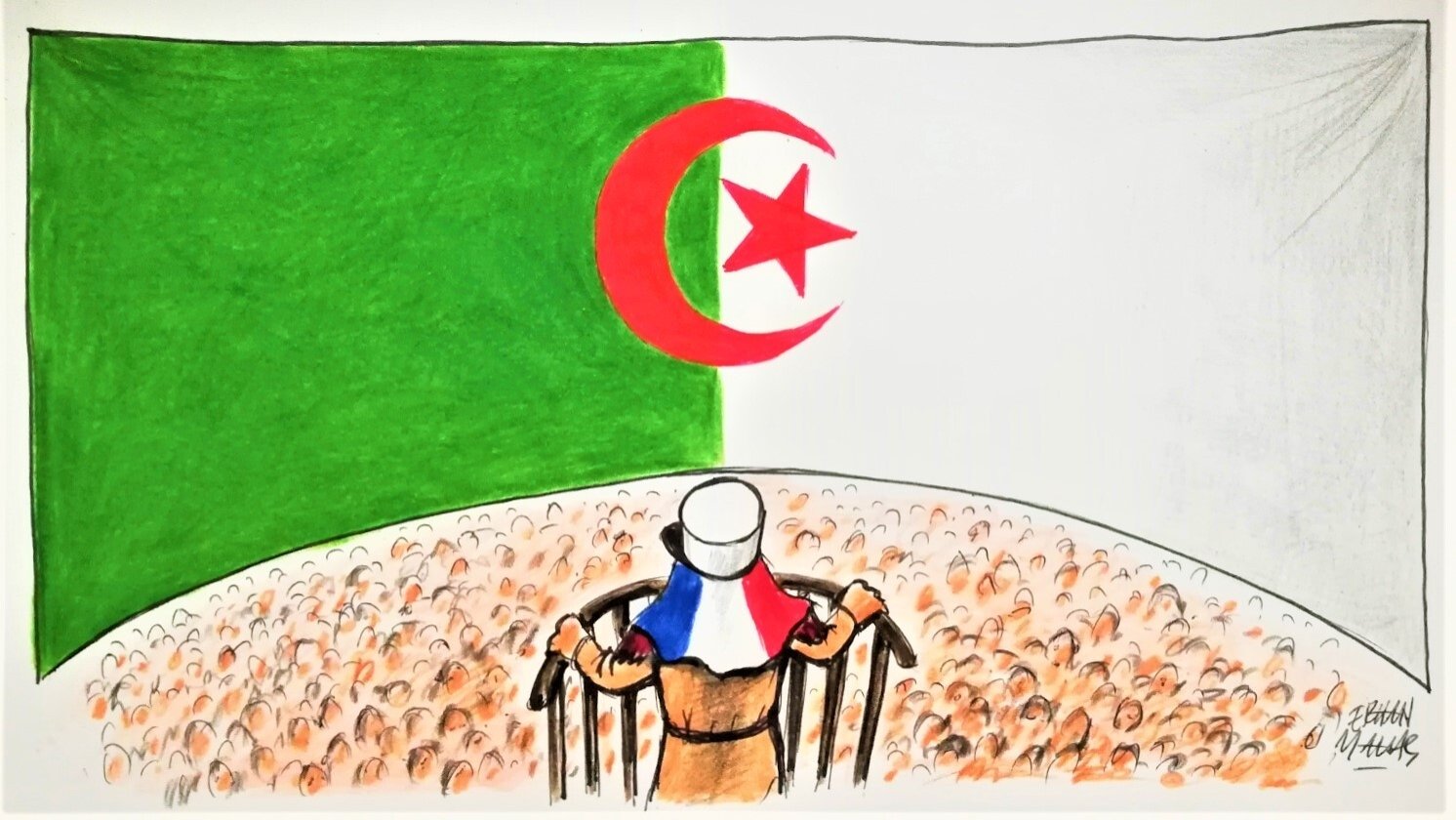 Illustration by Erhan Yalvaç shows a man with French-flagged hat confronting the Algerian flag, symbolizing the tension between France and Algeria.
by Abdennour Toumi Jul 07, 2021 12:05 am

The relationship history of France and Algeria from the colonial period to the present is quite complicated. In order to be in a good situation, both countries need to show mutual understanding on several issues

The “extraordinary” French-Algerian relations have been progressing lately. Even though there has been no concrete achievement in French President Emmanuel Macron's favor, a president who shows the political will can find a way to progress.

Unlike his predecessors, Macron’s Algeria policy has become stuck in the hardcore discourse in Paris on French-Algeria nostalgic myth on one hand, and the ghost of second-team spirit that is haunting the French president.

However, the Algerian political establishment, conservative elite and media insist that France’s state of denial must end. Last winter, French historian professor Benjamin Stora issued a detailed report in the hope for reconciliation between the two countries.

But the report did not tackle the sensitive questions of repentance and Harkis (para-military groups of Algerian origin who fought on France's side against the Algerian Liberation Army (NLA)) nor recognition from the former colonizer.

The report proposals did not touch on the thorny question of systemic torture used by French forces in the Algerian War of Independence. During his short visit to Algiers in February 2017, then-candidate Macron acknowledged the use of torture during the Algerian War between 1954-1962.

Last year on Algerian Independence Day, July 5, French authorities handed over skulls and remains of Algerian resistance heroes in the aftermath of the early years of the French conquest of Algeria in 1830.

Based on Paris’ promises since 2012, former President Francois Hollande tried to honor the memory of Algerians, yet nothing has been achieved.

Macron will be facing tenacious candidates from the right parties, such as the National Rally (RN) party leader Marine Le Pen, whose popularity is rising steadily in every national opinion poll.

In spite of the political defeat of two declared candidates in next year’s presidential race, both leaders’ candidates were severely hit in June's regional and departmental elections.

On the other side, Algerian authorities, like the conservative political parties, are still awaiting a solemn recognition from France of the atrocities it committed during the colonial time, in exchange for a stable relationship based on mutual respect and equal partnership between the two countries.

Nonetheless, the frozen relations of the two countries go beyond the shameful French colonial heritage in Algeria. Politicians in both countries capitalize on the dynamics of selective history and collective memory to hide their incompetency.

In 2000, former Algerian President Abdelaziz Bouteflika paid a historical visit to France and spoke before the French MPs at the National Assembly. Bouteflika was well-informed about France and its political establishment as he had served as diplomat-in-chief of Algerian diplomacy during the glory years of the 70s.

He knew that French President Jacques Chirac was waiting for him to bring up another thorny issue in the “natural” relations between the two countries – the Harkis question – but the president did not cave in.

Fifty-nine years later, the question of the Harkis is still haunting French presidents. Macron’s hands are tied with domestic politics at home due to the Algerian affairs that have landed him in hot water with the RN and Republicans.

Two generations of Algerians born after 1962 are facing a socioeconomic dilemma at home today and are looking for a better life abroad.

Hence, the post-independence period in Algeria and post-Algeria war in France is not so much a question of collective memory and repentance, as it is a matter of better life for Algerians at home, and one of the darkest stories of France’s empire for its generations. As for the rest, the solution is a better focus on bilateral economic developments.

What could be the future of the “extraordinary” relations between France and Algeria? It's easy to assume that nothing would change after years of unstable relations. The Algerian community in France is gradually becoming a serious lobby. Despite its sociopolitical and demographic heterogeneity, the Algerian diaspora in France has the potential to play a fundamental role in the relations between the two countries.

Particularly in the economic sector, opening up new ways of commerce exchange and encouraging small businesses like technology services could generate wealth and help the Algerian economy.

The two countries may leave out the traditional economic exchange like that involving the gas and automobile sectors that have formed the backbone of the economic relations between Algeria and France.

Thus French-Algerian relations have been more or less neutral since the election of Macron in May 2017 because of the ongoing toxic debate in France on topics such as migrants and integration.

All these societal themes are affecting the progress of the bilateral relations between the two countries.

As for Algiers, the new foreign policy paradigm and military doctrine established by the administration of President Abdelmadjid Tebboune in the aftermath of his election in December 2019 is also effective.

Algiers, however, is trying to reframe its France policy, a shifting policy based on cooperation that could sustain economic development and enhance military and intelligence cooperation between the two countries.

Yet, Macron, like Bouteflika, is pushing rhetoric that has put the French-Algerian relationship in a permanent state of ambiguity.

Bouteflika had been trying to maintain the paradigm of “extraordinary” relations, which was wanted by President Houari Boumediene, who did not want to have normal relations with Algeria's former colonizer.

In light of the threats of new non-state actors, France is concerned for its national security, just like Algeria. Paris is looking at Algiers as a reliable partner to fight extremist groups, human trafficking and migrant smuggling.

In the face of the region’s instability, Macron oddly announced an end to the “Barkhane operation,” which is an unwinnable war launched by his predecessor Hollande in 2014.

The latest developments in Mali and Chad have sustained Algiers' role to help the region’s stabilization process and play the role of a credible broker between local leaders and European, Russian and American special forces in the region.

Another important determinant in French-Algerian “extraordinary” relations is the election of Tebboune and the new military leaders in Algiers who are taking into consideration the role of another regional power in the Maghreb and in Africa in general: Turkey, who emerged as a solid partner for Algiers.

Ankara-Algiers rapprochement is leaving a sour taste in Paris’ mouth. The latter feels like it is losing its so-called backyard. Turkey is involved in hundreds of investment projects in Algeria as the country has the world's third-highest presence of Turkish companies. Turkish companies are Algeria's largest foreign employer, providing jobs for 28,000 Algerians.

In 2006, then-Turkish Prime Minister Recep Tayyip Erdoğan in his first state visit to Algeria signed a Friendship and Cooperation Agreement in Algiers, followed by his visit in 2013 where he was accompanied by 200 business leaders.

Algiers, however, was carefully watching French-Libya policy and its impacts on Algeria’s national security and political stability during the yearlong Algerian peaceful protests in 2019.

Libya’s civil war and its humanitarian and national security repercussions had made Algiers look at Turkey as a stabilizer factor in Libya, as Ankara sees Algeria as one of Turkey’s important route to the Maghreb and Africa.

To sum it all up, French-Algerian relations are not natural nor extraordinary, nor are they likely to thaw on the eve of the upcoming crucial presidential election in France.

The two countries undoubtedly continue to have warm relations, but each country stays on its comfortable base zone and there is nothing wrong with that. France should stop looking at Algeria as three colonial “administrative” departments; meanwhile, Algeria should also stop asking for repentance because Algeria’s glorious liberation war made history and told its legendary story to the world.