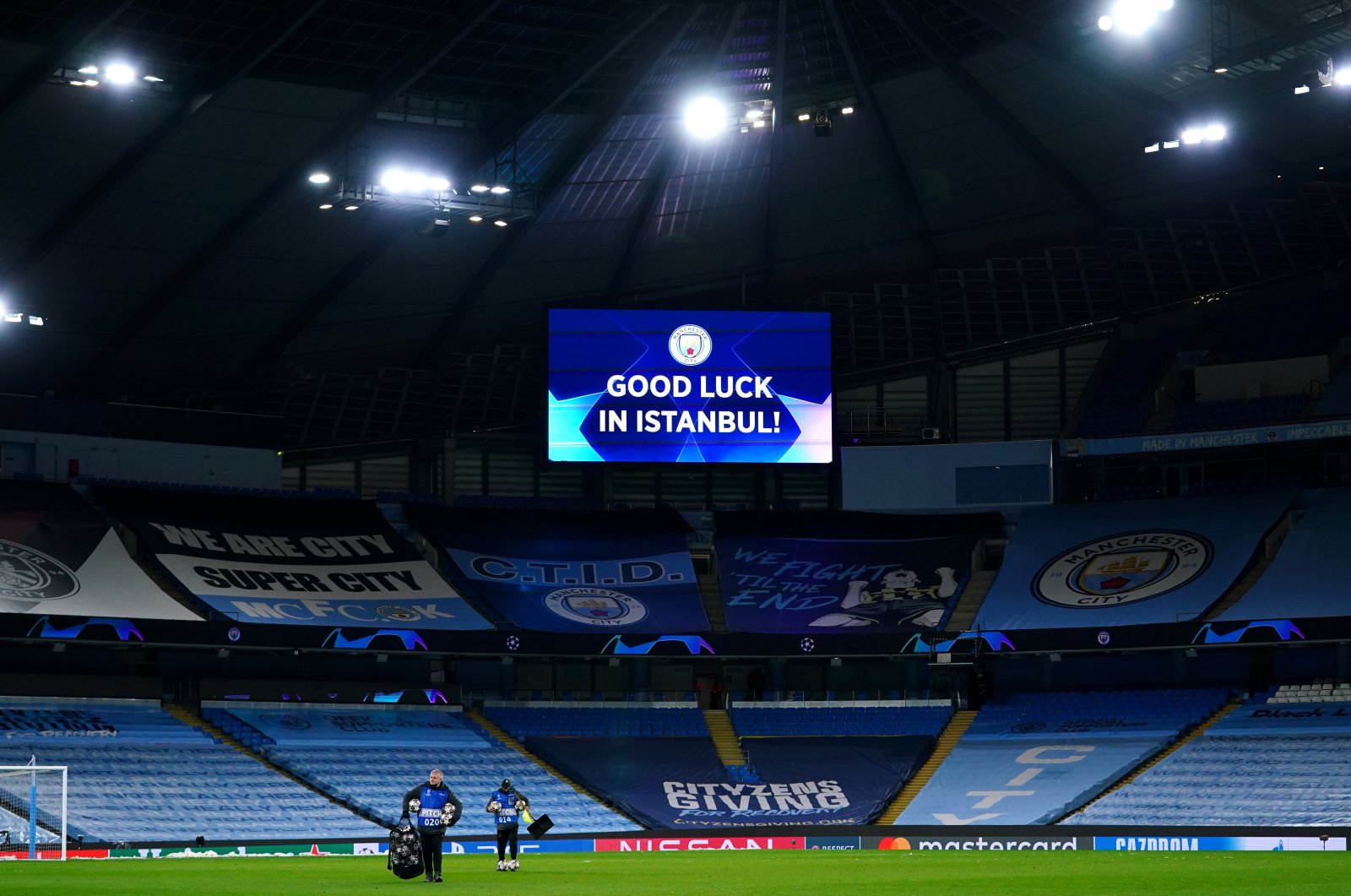 The LED screen inside the stadium displays a message of "Good luck in Istanbul!" with a picture of the Manchester City crest after the UEFA Champions League Semi-Final Second Leg match between Manchester City and Paris Saint-Germain at Etihad Stadium, in Manchester, U.K., May 4, 2021. (Photo by Getty Images)
by Klaus Jurgens May 20, 2021 12:05 am
RECOMMENDED

Across the English Channel rumors circulated for quite a while and comments were made discreetly in private as the topic was a hot pick: what if the COVID-19 situation in Turkey would not improve in time for the UEFA Champions League Final scheduled for May 29, 2021? Should the location change and Istanbul be replaced by London’s Wembley Stadium? Even more so as both finalists hail from England with Chelsea and Manchester City battling it out against each other. Things were still looking good for Istanbul hosting the final as of May 6th as nothing had been voiced to the contrary in public yet.

And then the British government stepped into the ring as if by magic on May 7 and the narrative changed dramatically: London had placed Turkey on its "Red List," making traveling from and to Istanbul basically impossible.

Not shy for words, and for sure not hiding his true intentions either, U.K. Transport Secretary Grant Shapps went on air that Friday and announced that the U.K. was "very open to hosting the final round."

At a hastily organized press conference, he mentioned that the Football Association (FA) was already in talks with UEFA but that UEFA, not London, would of course ultimately decide.

As Agence France-Presse (AFP) reported on the day from London, Shapps continued by saying, "I’m afraid we are having to put Turkey on the red list ... fans should not travel to Turkey ... of course, the U.K. has already got a successful track record of football matches with spectators, so we are well-placed to do it."

To make certain no last-minute fan club activity would bypass lengthy and very expensive quarantine rules mandatory upon fans and players returns, on May 12 the British government announced that all direct flights departing from Turkey headed to the U.K. would temporarily be banned.

Let us be clear, no one is challenging the British government’s fine efforts in trying to combat the virus. Above all else, the U.K. has a tremendous vaccination record and had started easing lockdown regulations only this very Monday with a final and complete easing penciled in for June 21, 2021. It is a huge success story in bringing infection numbers down, so credit should be given where it's due.

And no single country or government has the one and only viable approach to rid their nation from COVID-19 – everyone everywhere is doing their best.

But when a number of small steps eventually form a bigger picture, commentators must be allowed to raise their hands as if during a live presser and ask questions.

First and foremost, Turkey’s daily rate of infections was equally reduced to a large extent, and curfews and partial lockdowns helped to achieve just that. It was expected that two to three weeks further down the line Istanbul would have been perfectly ready to host a large-scale post-pandemic public event.

If we add the vaccination program rolled out to include all hospitality industry sector staff and the complete sanitization of hotels, restaurants and so on and so forth, Istanbul was as ready as London with regards to hosting the Champions League (CL) 2021 final safely and successfully.

Although another partial lockdown has now been announced in Turkey until June 1, 2021, it would not have been improper or logistically impossible to lift restrictions one or two days earlier, hence May 29 plus the night before and after could have become windows of opportunity for foreign travelers.

If we now add a previous announcement by the Turkish authorities that it is looking into opportunities to lift PCR-test requirements for all incoming flights from the Republic of Ireland by May 27, hence allowing for an orderly start of the summer tourist season, Istanbul as the CL venue was for sure ready.

UEFA officials did indeed meet with FA representatives, but this time it was the English side’s very own testing and quarantine rules for all European arrivals except Portugal that made UEFA decide not to hand the CL final to London. That included TV crews and sponsors and other expected guests from outside the U.K. who would have refused to travel there.

But even UEFA could not resist commenting publicly about the Turkey red list decision by London, as UEFA President Ceferin was quoted on the BBC as saying "the U.K. government’s decision to place Turkey on the red list for travel was made in good faith."

To answer this question one should probably consult a doctor, but it somehow fits into the abovementioned string of events. Assuming London would not have given the green light to Portugal, UEFA would have been in deep waters across the English Channel.

Without any European country that British fans and clubs could travel to there would simply have been no "real" CL final this year, similar to what happened last year.

There are other countries in Europe where infection rates and levels of vaccinations are looking very promising indeed, so perhaps a fourth contender could have been considered? In many places schools are fully reopened and hotels and restaurants are going back to business in more and more locations.

Needless to say, UEFA had very limited time to make up its mind, as planning for thousands of fans to travel internationally during periods like these is no small feat. In a nutshell: London’s red list addition of Turkey cancels out Istanbul with Turkey having no chance to remedy the situation unless London agrees.

The U.K. itself was not in a position to waive quarantine rules for any potential Wembley final. As 12,000 U.K. fans are expected to travel and only one green country around – welcome to Portugal.

UEFA had no other option but to react and react fast. As both finalists are English teams, considerations had to be given to that market segment in particular. But correct me if I am wrong and as politics is the art of the possible:

Would it not have been possible and perhaps even advisable to keep 2021 final in Istanbul? Remember the exact same scenario occurred last year and a revamped final competition was ultimately held in Portugal’s Lisbon.

One suggestion at least no one in the U.K. had voiced between May 6 and May 12 was to lobby UEFA to move the final forward by two or three weeks.

Assuming the U.K. travel industry would have expected a complete easing of travel bans by June 21, and in the clear knowledge that Turkey is a prime holiday destination for British customers, a compromise of sorts could for sure have been hammered out.

Should UEFA have taken the lead and postponed the match but keep it in Istanbul? Should London have played fair and acknowledge the agreed venue was Istanbul and never Wembley for this year’s final? Many questions remain unanswered, and there is this strange aftertaste that once again politics took over the world of sports; pity if true.

There is nevertheless enough line space for a further and final paragraph of positive words with regards to Istanbul as CL venue. If all goes according to plan, chances are this year’s Super Cup final will be held in the city overlooking the Bosporus as well as the CL final in 2023 coinciding with celebrating Turkey’s Centenary.

In particular, 2023 will become a perfect year to demonstrate to the entire world of football aficionados that Turkey is a nation of football lovers and that Istanbul is a city to host full capacity large-scale public events indeed.

Besides, Turkey’s football association is for sure happy to take things as they happen and will play by the rules instead of suggesting during press conferences "we are open to" hosting events here is better than letting someone else steal the show no matter what.