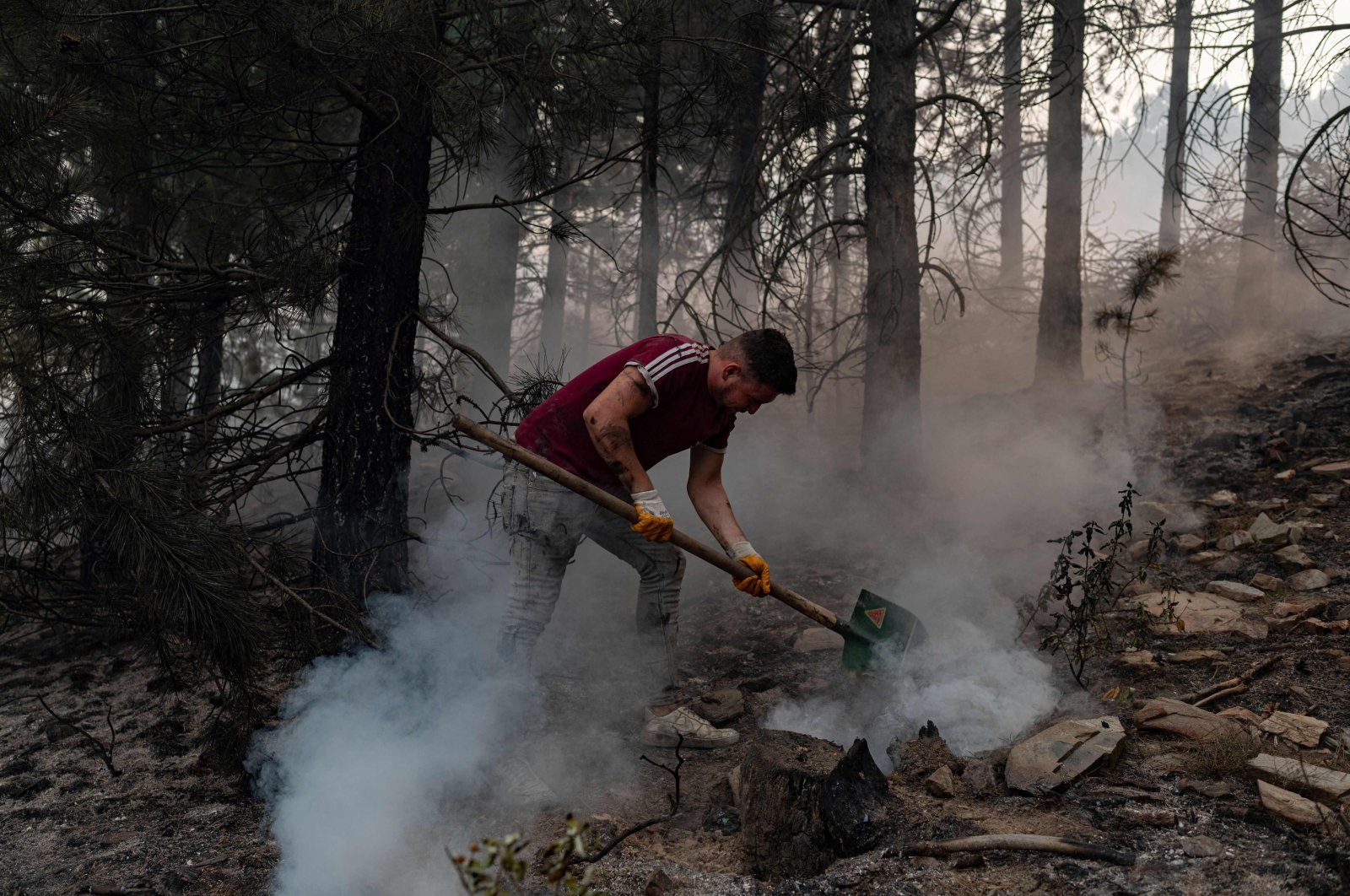 A volunteer from a nearby village uses a shovel to help contain smouldering forest fires in the hills of a recently burnt area near Kavaklıdere, a town in Muğla province, Turkey, Aug. 5, 2021. (AFP Photo)
by Ozer Khalid Aug 07, 2021 12:05 am
RECOMMENDED

Climate deniers should hang their heads in shame. A series of earth-shattering natural disasters have tormented our planet over the past weeks: from devastating floods in China and western Europe to scorching heat waves and life-sapping drought in North America, to wildfires in the sub-Arctic.

Even in the United Kingdom, infamous for its gray and gloomy weather, temperatures soared above 34 degrees Celsius (93 degrees Fahrenheit) for six days straight throughout southern England. British summers are poised to scorch at 40 degrees Celsius even if worldwide warming is capped at 1.5 degrees Celsius. Meteorologists are concerned that they have underestimated the veracity and velocity with which climate change would be inflicted upon us.

Now Turkey is doused in Dante's Inferno, driven by a southern European heat wave triggered by hot airwaves from Northern Africa, which spreading incendiary chaos across the Mediterranean, enveloping Greece and Italy. Climatologists warn that extreme weather events increase the regularity and infernal intensity of wildfires. Data from the European Forest Fire Information Service attests that three times as many fires as usual have occurred in 2021, setting ablaze 140,000 hectares of area.

From Manavgat to Marmaris to Antalya to Bodrum, Turkey's southern coastline has been set on a tortuous blaze by wildfires. Turkey's pristine beaches transformed from a paradise into a purgatory. Citizens in Darwinian survival mode escaped in boats and yachts.

Earlier in 2021, Turkey received warning signals of climate change. In May, eastern Turkey faced drought. Mounting temperatures in the Black Sea, the Marmara Sea and the Dardanelles have caused migratory birds like flamingos, white-headed ducks and black-winged stilts to die because of drought.

These raging fires setback Turkey's tourism sector, already crippled by COVID-19. Villagers carrying water containers up a hill to extinguish wildfires argued that the government was not doing enough to support them. Many families lost everything.

The fire caused their land to become infertile for farming, growing vegetables or breeding livestock, ruining precious livelihoods. The government's handling of this crisis is criticized. However, it has pledged financial lifelines, compensation packages, additional social security and tax amnesties to those affected.

Instructive lessons can be learned from these wildfires. Turkey did not have sufficient firefighting aircraft. Nature sends us warning signals: nations must be better equipped to forecast such eventualities, prepare contingency plans and have the necessary health, safety, emergency (HSE) equipment and aerial resources.

With a lack of resources in the fire-hit regions, firefighters nationwide were dispatched to help. Therefore fire-struck regions must be better resourced and equipped. Natural reforestation and replantation initiatives must be given top priority.

The most common reasons for forest fires are heat waves or campfires left by reckless picnics. However, many found these fires suspicious. Turkey's forestry minister stated that the wildfires to be set ablaze concurrently without wind force carrying them further sparks doubt.

Turkey's law enforcement agents opine that the root cause for such unprecedented fires in far-flung stretches of the country could well be acts of terror, sabotage or arson. Turkey's air force is conducting counterterrorism operations in Northern Iraq, a sanctuary for the outlawed PKK terrorist organization.

PKK militants, a designated terrorist organization by Turkey, the U.S. and the EU, have a historical track record of setting forests ablaze. Environmental devastation is one of their retaliatory measures. For instance, upon PKK founder Abdullah Öcalan's expulsion from Syria in 1998, major wildfires erupted throughout Turkey, setting ablaze forest lands and apartment blocks. The “Children of Fire Initiative,” a PKK-related entity, claimed responsibility for the wildfire officially in Nuce Civan, their online propaganda outlet.

Modern reconnaissance satellites and thermal imaging technology can shed light as to whether some of the wildfires were arson or terrorism.

Ironically, tighter forest protection laws in Turkey, such as the forest law number 6831 of 1956, are more likely to trigger fire disasters. Whereas in the U.S., contained burns are utilized to cleanse forests of desiccated leaves and rubble, which trigger wildfires, Turkey prohibits them, making bigger blazes tougher to contain. Turkey should better integrate forests into urban planning as this disaster attests, forest wildfires are now peaking at a magnitude where they may imperil urban cities.

One of the lessons from Turkey's current forest fires is that the National Forest Program must be updated to include agriculture, energy, tourism and industry as all are interlinked. Time is ripe for a new forest act. Turkey's Ministry of Agriculture and Forestry needs to better integrate forestry into other related sectors like timber and non-timber products, environmental services, and socioeconomic priorities.

From extreme weather conditions in China to western Europe and London's flash floods, now to Turkey's wildfires, 2021 teaches us that all is interconnected. Floods and wildfires are not detached occurrences: they are the consequence of multiple feedback loops in dynamic ecosystems. London's flash floods in July were catalyzed by summer rainstorms, which were triggered by warm air rising from the Earth’s surface pent up during the previous heat wave, creating the rainstorm. In Turkey, as we now witness wildfires worsened due to previous droughts.

Our planet's climate is intricate, integrated, cataclysmic, involving interactions between the land, ocean and atmosphere. Climatologists can no longer study part of this system in a vacuum. There is an urgent need to swiftly and intelligently integrate atmospheric sciences, hydrology, Earth systems sciences, or engineering.

Natural hazards are not independent of one another. It takes more than rain to commence a flood, and more than a spark to ignite a wildfire. Our climate systems and weather hazards must be analyzed in an integrated, holistic manner.

In Turkey and globally, fire ecologists must host joint sessions with marine biologists, hydrologists, meteorology departments, climatologists and geo-engineers to better conduct risk and impact assessments. This will offer humanity a broader understanding of the best mapping and mitigation techniques against planetary global warming and its interconnected extreme weather patterns.

As the climate changes, it will get even hotter, and the fires will grow. Being more alert of compounded climate events and their multiplier effects must alter the way we live our lives in a warmer world. Climate crisis compels us to conduct cross-disciplinary research and develop more sophisticated approaches to disaster risk assessment and climate change modeling that includes all weather-driven hazards and their complex, ever-changing interactions.