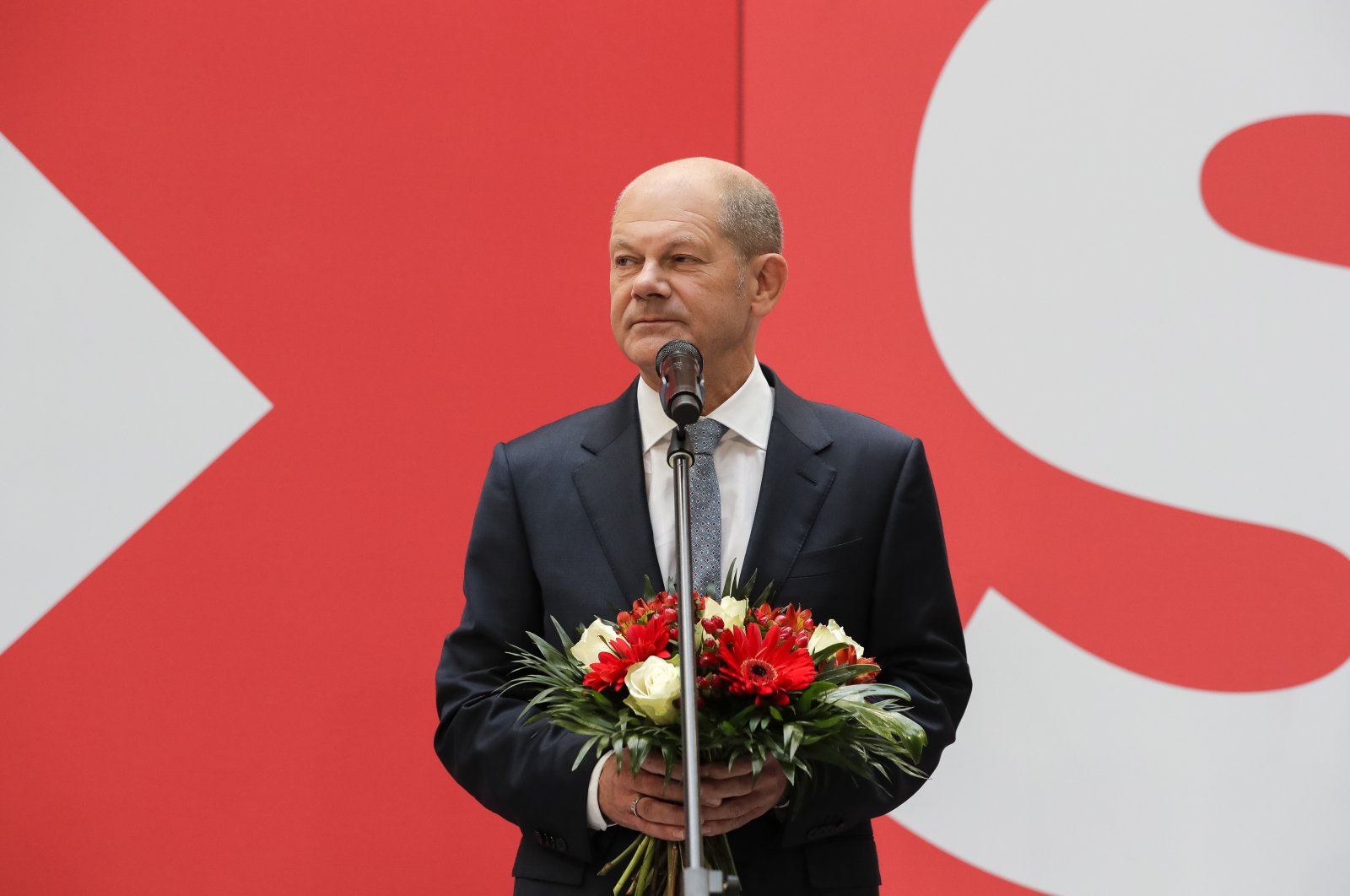 Olaf Scholz, the top candidate for chancellor of the Social Democratic Party (SPD), holds a bunch of flowers during a press statement at the party's headquarters in Berlin, Germany, Sept. 27, 2021. (AP Photo)
by Klaus Jurgens Sep 28, 2021 12:05 am
RECOMMENDED

Notwithstanding a dramatic U-turn among the electorate resulting in a 5.2-point swing to the center-left Social Democrats (SPD) coming in at 25.7%, it is far from certain that the SPD's candidate Olaf Scholz will become Germany’s next chancellor. There is still a realistic chance that Armin Laschet’s conservative duo of the Christian Democratic Union (CDU) and its Bavaria-only sister party, the Christian Social Union (CSU) – albeit losing 8.8% at the ballot box – might pull it off. Surprisingly in the driver's seat is Christian Lindner’s Free Democratic Party (FDP).

Please remember that we are commenting on the provisional final figures, although a serious reversal of numbers as of Monday midmorning is no longer possible.

Before election day, there were four credible coalition scenarios. One was voted out straight away – SPD plus Greens plus the Left Party (Die Linke) as such a triple pack falls short of the required 368 parliamentary majority. Continuing the grand coalition between the SPD and the CDU/CSU, albeit mathematically possible, has been ruled out by all participating parties. Hence Germany is left with just two credible outcomes as no one would seriously embark on the repeat elections course if talks break down. First, Scholz hammers out a partnership with the Greens and the FDP. Second, Laschet accomplishes just the same, only faster.

Legally, both outcomes are possible. While it is tradition that the party who won the most seats in the Bundestag kickstarts preparatory coalition talks with potential partners, it is by no means enshrined in the constitution. Unlike in other democracies, it is not the head of state inviting the strongest party to start those talks, but party leaders are able to go about their business as they see fit. Only when a majority in parliament is fixed will the new chancellor be elected there and then. Until that moment Angela Merkel will be keyholder chancellor.

So: what makes one assume it is the FDP and not the Greens who will decide the new government composition? A listen-in during last night's televised debate with all elected parties present (except a guaranteed one-seat Danish minority party) gives the answer.

Greens leader Annalene Baerbock had set out to become the first Green chancellor. Not that the electorate would not like the Greens – they increased their share of votes by 5.9% to 14.8%, respectively. But they fell way short of overtaking either the CDU/CSU or the SPD. Yes indeed, they can argue they fared better than Lindner’s FDP that only secured 11.5% of votes. But during yesterday’s discussion live on television and as scoring points with the electorate was no longer necessary, a rather interesting picture emerged.

Scholz, while clearly in a victorious mood, completely failed to come across as a charismatic leader. Baerbock had only one issue to promote: climate change and that the new government would be the government of climate policies. Leaving the left almost marginalized, as well as, the in-no-way-fit to govern far-right Alternative for Germany (AfD) aside, it was actually Armin Laschet who stole the show and presented himself not as a loser but as someone who thinks he can still be the next chancellor. As a matter of fact, he was the most likable speaker of the "Berlin Round" – post-vote program.

Enter Christian Lindner and the FDP.

Not directly discrediting what Scholz and Baerbock had to say he, however, reiterated his campaign vows that according to him a coalition with the CDU/CSU is preferable over doing the same with the SPD. He knows that in any case, the Greens will be on board so that is a given fact. He knows, too, that his very own party will be part of that new government as well.

And much to the surprise of fellow discussants, and for sure viewers at home, he invited the Greens to start preparatory coalition forming talks instead of waiting for either of the two bigger parties to get going. And the representative of the Greens did not object, at least when we are reading between the lines as Baerbock said she wants a departure from previous modus operandi and change the way politics are carried out in her country.

Now let us imagine this proposal is how things will progress and that at some stage in the near future the Greens and the FDP agree on a certain road map of what both parties see as their red lines and only then continue to hold exploratory talks with the two "big ones": the CDU/CSU and SPD.

As the Greens want to be in government no matter what, there will be ample opportunity to make a compromise – as long as climate change is on the new governments’ agenda. Having said that, it is rather the Greens who would theoretically side with any of the two big parties.

Hence the ball is firmly back in the FDP’s court. Knowing that the Greens perhaps look both ways, Lindner can play the joker card and dictate any of the two big parties to his demands.

He is in favor of a market economy, a stable government and a fast solution. His personal preference is linking up with the CDU/CSU. There are rumors that both the Greens and the FDP are eying the Finance Ministry.

Now picture this: The Greens are interested in only one topic – yes as written above – climate change and climate policies. The CDU/CSU take that seriously but not as their major concern – stimulating the economy in a post-pandemic reality comes first. Let us further assume the Greens thus decide to give it a go with the SPD. Fair enough – but without the FDP no such luck. In that scenario, it would again be Lindner’s Free Democrats holding all the final cards. Would he change tactics and enter a coalition with the Greens and the SPD despite his disliking such a solution? He might just as well, as long as his core liberal beliefs are mirrored in any deal struck.

Should that possibility fail to attract enough support among party members in the SPD and the Greens, and as the Greens desperately want to be part of the new government, a last-minute swap to a CDU/CSU-led coalition including the Greens and Liberals might appear more favorable. Now Lindner is in an even stronger position as his market economy views match those of the CDU/CSU.

All parties agreed on election night that a deal must be struck come Christmas, ideally before. The question on everyone’s mind in Germany is whether under normal circumstances with rather egocentric political machines and their spin doctors manage to throw caution to the wind and sit down with opposite numbers, so to speak, and do so fast.

As we focused on the potential role of the FDP in these ventures the party would be well advised to shelve some of its past clinging onto power images. We all recall history when a swap from one coalition partner – the SPD, to another, the CDU/CSU – led to the downfall of the late Chancellor Helmut Schmidt’s government.

As long as a constructive FDP is the new order of the liberal day a red-green-yellow coalition might work out just as well as a black-green-yellow alternative.

Fascinating weeks lie ahead for German politics. The one person most unhappy with prolonged coalition talks is supposedly Merkel; toward the end of yesterdays' party leaders debate, a joke made its rounds whether or not she would deliver the traditional New Year’s Address early in 2022.

Post-Brexit, soon post-pandemic, and now post-election day: If Germany wants to rekindle its stakes to remain in the EU driving seat, time is of the essence. It remains to be seen whether all political parties are up for it.