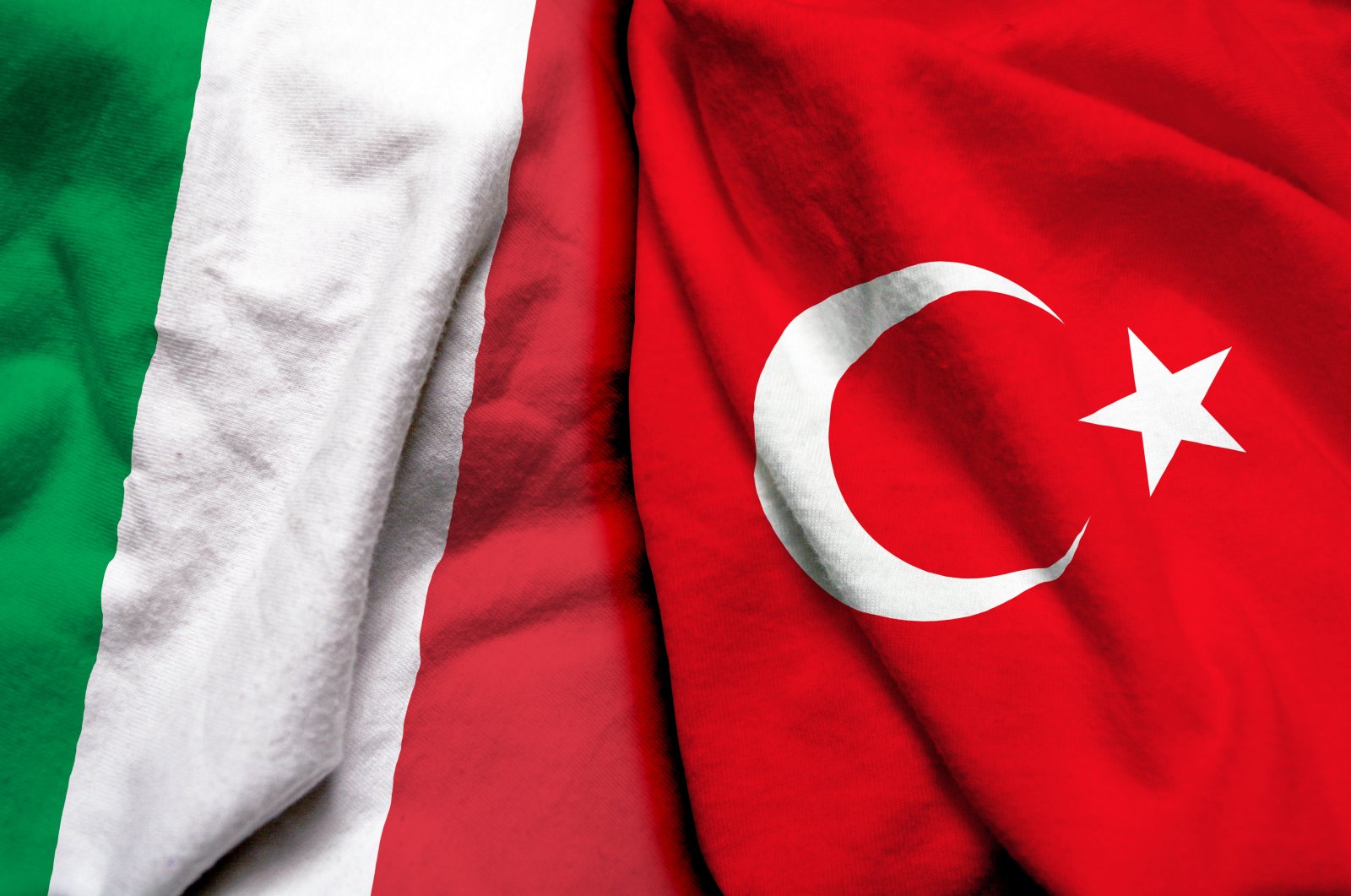 The flags of Turkey and Italy are pictured side by side in this illustration. (Photo by Shutterstock)
by Valeria Gianotta
Mar 05, 2021 12:05 am

After the latest political crisis and vicissitudes, Italy has finally established a new government, whose main representative is the former governor of the European Central Bank, Mario Draghi.

Draghi's mandate is based on great agreements pivoting on a wide trust accorded by almost all parliamentary groups, with the exception of the far-right party Brothers of Italy (FdI).

Explaining how Italy got to this point amid the pandemic is not an easy task because the process is linked with the typical psychology of Italian politicans and the interpretation of the Italian democratic game.

Here, it can be said that the key point of the new Italian synthesis is the country's European vocation and interest in specific foreign policy issues.

In one of his first speeches, Draghi explicitly referred to Turkey, declaring that his government "will also continue to work for a more virtuous dialogue between the EU and Turkey, a NATO ally."

The reference to international institutions is certainly not a coincidence given Italy's strong anchoring and full respect for their founding principles.

The strong reference to Turkey, moreover, is certainly in continuity to the political agenda of Italy, which has always been a friend of Turkey and a historical supporter of Ankara within the EU.

Since the very beginning, Italy has supported Ankara’s EU accession, which is considered of great importance from both a strategic and a political point of view.

Years ago, the so-called "friends of Turkey group," including Italy, Spain, the U.K. and Sweden, was established with the explicit aim of balancing the existing negative approaches.

More recently, Rome promoted a positive agenda in Brussels to counter the request for sanctions made by France, Greece and others.

In other words, along the European Council, which convened on Oct. 1-2 in 2020 specifically to assess the situation in the Aegean Sea, Rome played a key role by proposing a positive agenda toward Turkey.

After the European Council's gathering on Dec. 10-11 in 2020, the importance of keeping channels of communication between the EU and Turkey open was reaffirmed.

Indeed, the European link with Turkey has a strategic connotation that touches on important issues such as migration, the war on terror, crime, and the trafficking of arms, drugs and human beings.

The energy and economic issues can also be added to the list above.

Indeed, while the EU is the No. 1 trading partner of Turkey, Italy firmly stands as the second European country and ranks fifth worldwide with a perfect balance of imports over exports.

As it was mutually stated, currently the bilateral aim is to reach the trade target of $30 billion (TL 223.84 billion) in the near future.

Before the pandemic crisis, the bilateral exchange amounted to around $20 billion. Nowadays, despite the historical moment of serious difficulty, Italy is the first investor in Turkey with a flow of foreign direct investment (FDI) of $970 million in the first two months of the year 2021, with a total of $1 billion in 2020.

Hence, once again, Italy shows how much it believes in Turkey.

Ankara, indeed, is a valuable partner for Rome, the most important one in the Mediterranean basin where both countries share same routes and historical connections.

As a corollary to this partnership, last December, the second session of the Joint Economic Trade Commission (JETCO) between Italy and Turkey was held in virtual format.

On that occasion, by referring to the widespread Italian presence in Turkey and the 1,400 companies operating in key sectors for both countries' markets, Italy's Foreign Minister Luigi Di Maio stated that "these consolidated experiences are a stimulus to further strengthen the partnership, especially in the energy and infrastructural field."

On the other side, Turkey's Trade Minister Ruhsar Pekcan reiterated the strategic role of the relationship.

"With its young population and with a dynamic infrastructural apparatus Turkey plays a fundamental role," she said.

The JETCO protocol mainly concerns the energy, industry, health and education sectors, which also play a key role in the cooperation in third countries, where both Turkey and Italy are general contractors.

Although the partnership is already consolidated, as seen in the construction of railways in Ethiopia and Tanzania, new opportunities can be developed in other target countries, including those in sub-Saharan Africa, the Middle East and Asia Pacific.

Thus, there is a margin to think that, in the future, we can only witness a qualitative and quantitative improvement in Italy-Turkey bilateral relations.

However, an expansion of opportunities aiming at creating further synergy is needed as well as an update of the customs union with the EU.

*Assistant professor at the University of Turkish Aeronautical Association in Ankara