'Northern Cyprus will not be Gaza’ 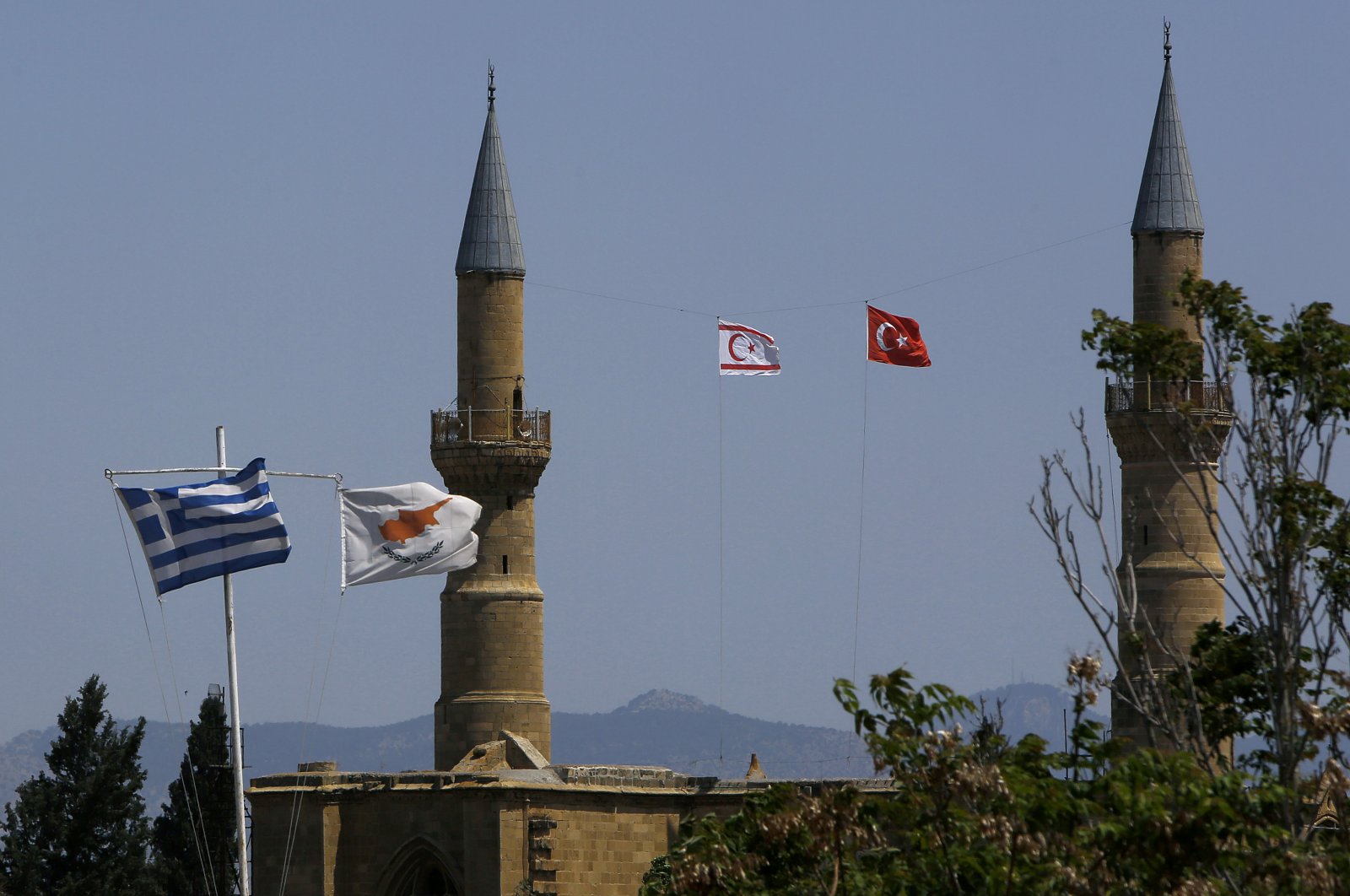 The Greek (L) and Cyprus flags (2nd L) flutter on poles in the south as in the north Turkish Cypriot area, Turkish (R) and Turkish Cypriot (2nd R) flags fly on a minaret of the Selimiye Mosque, in the divided capital Nicosia, Cyprus, April 26, 2021. (AP Photo)
by Ferhat Tutkal May 29, 2021 12:05 am
RECOMMENDED

In April 2021, an informal meeting on Cyprus was held in Geneva. U.N. Secretary-General Antonio Guterres said that there is ‘‘no common ground’’ to resume formal negotiations after the talks.

Why did the talks fail again and why do the European states have to recognize Northern Cyprus as a state before the subsequent negotiations? Since the Cyprus issue has deep historical roots, one must consider some historical events on the island before answering these questions.

Cyprus, the third-largest island of the Mediterranean Sea, was ruled by the Ottoman Empire for more than 300 years until 1878. After World War I, it was colonized by Britain and remained a British colony until 1960.

Under British rule, proponents of the "Enosis" idea (the incorporation of Cyprus into Greece) revolted systematically. In 1955, the National Organization of Cypriot Fighters (EOKA) was founded and started armed actions against both civilians and the state authorities to achieve unification.

After the heavy clashes and violent conflicts, in 1959, Britain ended its colonization in Cyprus. In 1960, the Republic of Cyprus was established as a bi-communal state where Turkish and Greek communities have equal rights in governance under the guarantorship of Turkey, Greece and the United Kingdom.

Both the Turkish Cypriots and Greek Cypriots were accepted as co-founders of the newly independent state and were politically equal. However, the Greek side was complainant of this issue because of their demographic majority. Many Greek Cypriots demanded proportional political rights under the leadership of Archbishop Makarios III.

In 1963, the Greek Cypriots wanted to amend the constitution, and they offered the famous ''13 amendments." The primary purpose of the amendments was to change Turkish Cypriots’ status from co-founder to a minority and change the bi-communal state to a unitary state.

Turkish Cypriots harshly criticized the amendments. The amendments and other inter-communal disputes caused tragic events and many civilians lost their lives. In 1963, the Greek Cypriot side ejected Turkish Cypriots from all state organs and unilaterally amended the constitution.

In July 1974, the EOKA organized a military coup with the support of the Greek junta. Makarios, because he did not want Cyprus to incorporate into Greece while the Greek junta ruled, was overthrown in order to achieve the Enosis idea.

After five days from the coup, Turkey, under the Article IV Treaty of Guarantee of 1960, sent troops into the island on July 20 to prevent further violence and bloodshed. Turkey captured one-third of the island and provided security for Turkish Cypriots.

On Nov. 15, 1983, the Turkish Cypriots used their right of ‘‘self-determination’’ and established the Turkish Republic of Northern Cyprus (TRNC). Since there is de-facto sovereignty of Turkish Cypriots in one-third of the island, the TRNC is isolated in the international arena, and it is only recognized by Turkey.

The Greek administration of Southern Cyprus is accepted as the representative of the whole island by the international community, which violates the rights of Turkish Cypriots and the issue of recognition is located at the center of deadlocks in negotiations.

In consociational democracies, demographics maintain an important place. The Lebanese civil war sets a good example on this issue. The Arab-Israeli War in 1967 led to migration waves from Palestine to Lebanon. After the migrations, the demographics of the country changed, and thus the demands of Muslim communities also changed.

The Muslim communities wanted to make the Lebanese power-sharing system more equally divided. However, one of the most important features of corporate consociations is political immobilism, and Lebanon’s consociation could not answer demographic changes, which led to the bloody civil war between 1975 and 1990.

The same rule can be applied to Cyprus. Between 1960 and 1963, the consociation of Cyprus ended, and one of the main reasons was demographic differences. Twenty percent of the population was comprised of Turks on the island. As a majority, Greek Cypriots demanded more because they did not accept Turkish Cypriots as a co-founder and an equal community while there was a big difference between the populations.

Turkish Cypriots are aware of the dangers of a united Cyprus. They do demand equal representation for preventing possible conflicts and securing their community. The Annan Plan (2004), also known as the Cyprus reunification plan, showed this to the world.

The Annan Plan was offered by the U.N. to solve the Cyprus issue. The plan offered equal representation for both communities in many state organs. A referendum was held on both sides in 2004. The Annan Plan was supported by 65% of Turkish Cypriots but supported by only 24% of Greek Cypriots, and thus it was rejected.

Ten days after the referendum, Cyprus was accepted into the European Union regardless of the results. The Greek administration was accepted as the sole representative of the whole island, and ignoring the Turkish community strengthened the Greek community in negotiations, which resulted in over demand of one side.

These results also showed that building a consensus for a unitary state is impossible because of the demographic differences. The Greek side is far away from the idea of equal political power in a unitary state because they comprised the majority of the island. Instead, they demand to share power proportionally, which may result in the oppression of Turkish Cypriots again.

While many Cypriots see Turkey’s support and protection as a guarantee against persecution, the EU’s attitude toward the TRNC creates a feeling of insecurity among Turkish Cypriots and makes the negotiations between Turkish and Greek Cypriots unbalanced and unhealthy.

On May 14, TRNC President Ersin Tatar stated that Turkey’s guarantees will not be lifted and Turkish soldiers will not be withdrawn from Cyprus. He added that "the TRNC will not be Gaza."

This statement shows Europe that any solution, including Turkey's military withdrawal from the island, is next to impossible. Turkish Cypriots feel insecure and think that Europe’s attitude toward them is biased.

Violating the right of self-determination of Turkish Cypriots also contradicts Western norms and values. Before restarting negotiations, the TRNC should be recognized in the international arena. Isolating the Turkish side only helps to marginalize them.

Strengthened federations and decentralization of power between the communities can be a good solution for building peace on the island. However, this solution will conflict with the interests of some European powers if it is applied well because many European powers prefer a supervisory Turkish community in Cyprus instead of a partner community in decision-making.

Ignoring the Turkish community from the decision-making process after a union will result in the weak adoptability of the new consociation. Allowing one group to dominate another one in politics will also violate the basis of post-conflict power-sharing.

While the TRNC president links unionizing in a central state with Gaza and Israel, it is clear that solutions of the Greek side will probably result in weak adaptability of Turkish Cypriots and bring more significant problems in the future.

A peaceful two-state solution will be the best option in today’s conditions. After the international recognition of the TRNC, there will not be any obstacles to continuing the negotiations. Ignoring the Turkish Cypriots today will only lead to deadlocks in future negotiations.

Since the interests of states and power groups always precede the just and ideal in international relations, expecting a fair solution in Cyprus will bring disappointment today. A solution in the island only can be settled by increasing recognition of the TRNC in the international arena, and for this, Turkey’s diplomatic power is of capital importance.