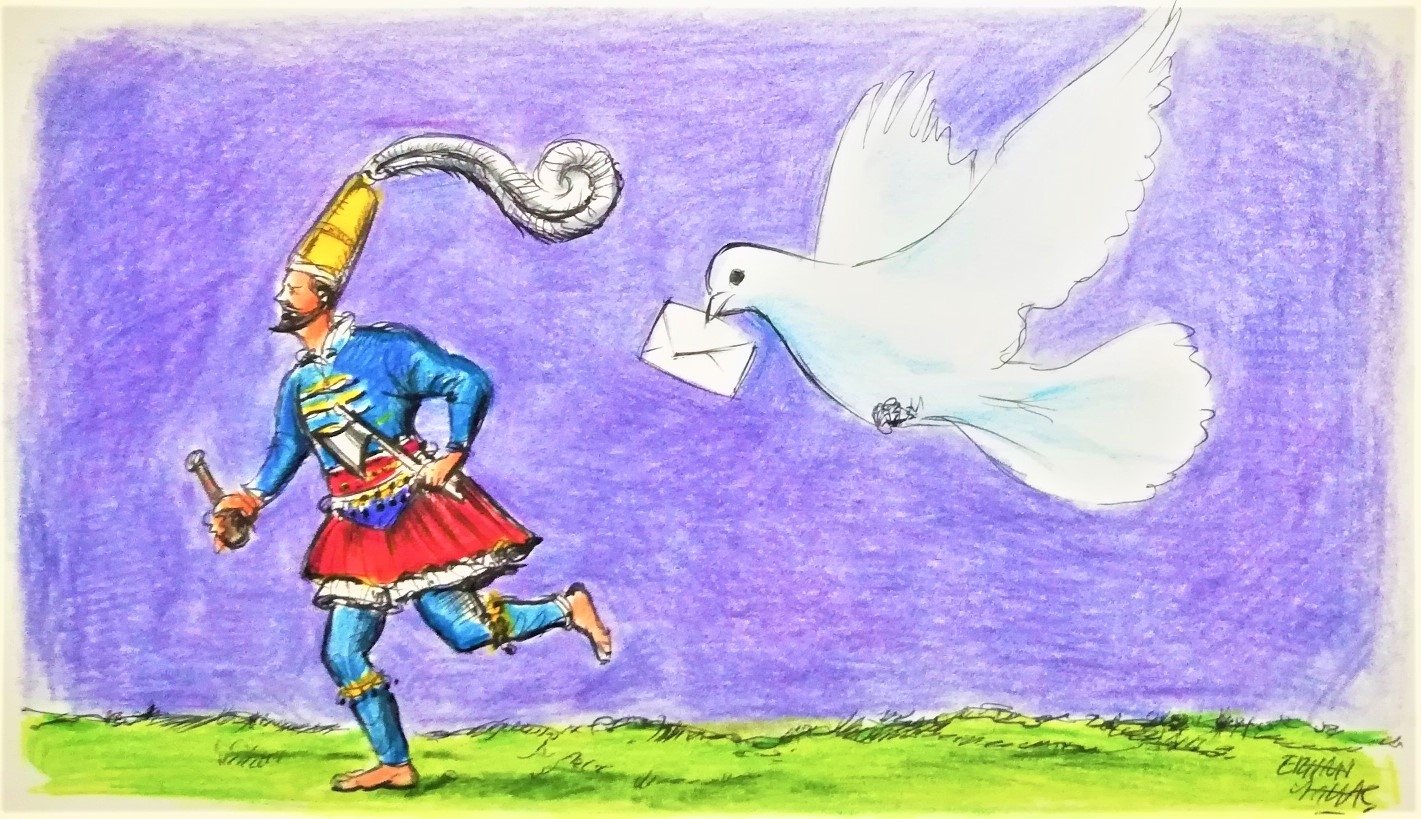 As an institution with a fundamental responsibility to serve society, the postal service offers constant public benefits and is the accumulation of the cultures from which it was passed from generation to generation.

In light of the critical need for an active postal service, it might be beneficial for national postal authorities to reflect on the core standards introduced by Ottoman Empire.

By the time the Ottoman Postal Administration was founded, the Ottoman Empire was an open postal market where European administrations thoroughly enjoyed broad postal autonomy.

Austrian, French, German, Russian, Italian and British post offices benefited over centuries from a commercial atmosphere through a network covering almost all Ottoman coastal cities and trade routes. It was inevitable that the Ottoman Empire felt the need to start reevaluating its postal service before it was too late.

To control internal and external communication and with the intention to be the sole designated postal administration in Ottoman territories led Ottomans to focus on monopolizing postal services for the first time in their age-long reign.

It began defining postal principles and making regulations to penetrate the domestic market and then examined how to organize the international postal service to compete with Europeans.

In defiance of aggravated circumstances, the Ottoman Post managed to operate exclusively for public purposes following its establishment.

It transformed the service portfolio in compliance with market requirements at regular intervals.

It introduced a postal reform package alongside postal principles and regulations based on inclusion, innovation and integration in line with "Ottomanism." Dealing with foreign post involved adapting, changing and challenging the existing postal system.

Thus, the Ottomans made massive progress in internal postal planning during the foreign post abolition process.

It was a fundamental and long-term transformation that continued from the 1860s until 1914.

History proves that the Ottomans' determined development of the postal services deserves to be better known.

When considered from that point of view, the Ottoman Empire was the first country to fight against postal violations and tell the world that there was no room for such contradictions within the boundaries of a sovereign state, all while becoming a founding member of the Universal Postal Union.

Therefore, later on, it became a role model for other countries facing the same problem, such as China. Within this framework, the year 1840 was a turning point from many perspectives.

A new, but this time native postal actor was entering the market. Unlike other European postal administrations, the country was home only to the Ottoman Post.

We consider this as a sign of the prevention of unfair competition on Ottoman lands. That step took the postal competition to a different level.

The struggle of the Ottoman Empire to claim the right to abolish foreign posts both in and out of the country provided the Ottoman Post with a more effective development opportunity.

The Ottomans' first postal line, put into service between the provinces of Istanbul and Edirne in 1840, was swiftly extended to rural districts.

Following this reform, detailed information on postal principles prepared in harmony with sectoral requirements was published in newspapers in both Ottoman and French.

Another significant move concerning Ottoman postal planning was replacing the postal corridor between Istanbul's district Üsküdar and the province of Izmit.

It is worth remembering that such close follow-up led to a direct contribution to improving postal routes in the capital and beyond.

The efforts of Mahmud II were carried a step further by his successor Sultan Abdülmecid.

Thus, he put the idea of establishing an Ottoman Postal Administration into practice with the decree dated July 4, 1840.

In this context, the Ottoman Postal Administration was established on Oct. 23, 1840, to provide a modern-style postal service.

In addition to government agencies, the Ottoman subjects started to benefit from postal services for the first time.

When the content of the first service principles is examined, it is evident that care was taken to ensure that the newly founded postal service was safe, fast, reliable, affordable and inclusive.

The importance of letter mail for individuals and commercial entities was the central pillar of postal planning.

Mail containing valuable documents, papers or policies could be carried as registered. A double fee was applied to registered items, and they would be delivered safely to the recipient in exchange for their signatures.

Subsequently, post offices opened in the districts of Silivri, Çorlu and Burgas as supply points on the Edirne-Istanbul line.

All post offices were designed to handle the mail in conformity with the service requirements.

An indication that invalidates allegations targeting the Ottoman postal employees, it appears vital to stress that those regulations strictly ensured the right of privacy and postal confidentiality within Ottoman boundaries.

Another exciting detail was that the senders could write the address information on letters in foreign languages.

Still, the destination and recipient names had to be in Turkish, which was critical to prevent misdeliveries and ensure on-time delivery.

We see that both acceptance and distribution were among the main tasks of each post office.

Today, in a similar practice to the transport of forensic science items by post, it was urged that any shipments that present a risk of disease spreading would not be accepted, preventing infection from spreading throughout Ottoman territories.

Envelopes could contain nothing except paper; otherwise, they were returned.

Ottoman postal strategies were visionary and foresighted. Considering that postal operators were caught unprepared for the COVID-19 pandemic, it is incredible to see that the Ottoman Post made some regulations specific to pandemics, epidemics and quarantine conditions with the aim of preventing danger.

They were designed in close coordination with Ottoman health authorities and implemented only in places where such events occurred.

All these show that sensitivity was the companion of all Ottoman postal planning and strategies, the public was respected and meticulous action was taken to ensure the proper functioning of post offices.

These special regulations clearly described how the post offices should be positioned and how the staff must act accordingly.

That proves that the Ottoman Post had many backup plans in the event of an emergency.

Ottoman postal bureaucrats were well aware of the fact that an emergency could occur at any time.

When the Ottoman Post was officially established, of course, it had a limited service portfolio.

Nevertheless, it is surprising that the solution found and implemented to overcome this shortcoming is still being implemented today by the best postal operators in Europe in some ways.

Although it was not possible in the short term to establish the postal service on an institutional basis in rural areas, government officials in provinces had temporarily been charged with the development of the postal service.

Compared to the first service principles, the first Ottoman Postal Regulation had a general scope that showed integrity. The principles applied to the Istanbul-Edirne and Istanbul-provincial postal lines were based on the law, down to the most minute details.

In this context, the first regulation is a cornerstone for the history of communication of the Ottoman Empire and the Ottoman Postal Service.

This foundation on which the Turkish Post and Telegraph Organization (PTT) is built also emphasizes several factors that have not changed in the postal service despite the high level of technical sophistication.

A customer-centered approach lay at the heart of regulations to describe the principles of postal service and the service points.

The postal policy of the Ottoman Empire towards the public had always been a matter of importance.

The Ottoman governments continually made attempts to organize and consolidate the postal service across the country to benefit all.

Drawing inspiration from past

The relevant regulation clarifies that the Ottoman Empire handled the mail, mainly where the service was provided.

The same is true today. The way Ottomans dealt with the postal service and post offices, and the first principles and regulations should be integrated into the PTT's strategies and action plans.

A similar approach will pay rich returns when the workforce and service points are put in motion.

This mentality highlights the idea of creating an accessible, affordable and inclusive postal service.

Furthermore, we believe that this distinctive and unique Ottoman perspective is precisely what today's postal operators are looking for.

For the postal supply chain and public health, the Ottoman Empire took necessary precautions to secure postal transportation and circulation.

Advising notes specific to banned items had been appropriately placed at the gates of each post office.

Besides the Ottoman language, these notes were also published in newspapers in French.

The staff, the post office and the postal service were the three main pillars of postal planning in the Ottoman Empire.

The success of the Ottoman postal strategy was built on one main cornerstone; respecting, valuing and supporting the postal staff.

According to the first regulations, the Ottoman post regularly informed the public that it would process any postal item received off-hours. No item was rejected from post offices.

Similarly, all managers were responsible for the safe provision of postal services and the proper organization and running of post offices.

The first postal regulations tell us about the Ottoman Empire's service competency and shed light on today's service atmosphere.

We should not forget that the postal service was organized for the purpose of carrying things, and that mission has become the crux of the global supply chain with the severe effects of the pandemic.

We can see that the postal operators are benefiting from tech to answer the challenges of today and tomorrow.

However, physical mail has become critical again, just like in the old days.

Considering that postal service providers have existed and been around for centuries, there is a significant history to draw inspiration from while creating new strategies.

Despite the impact of technology and globalization, the postal service remains an irreplaceable part of social life.

The public responsibility, the scope of service and post offices continue to be the unchanged elements of this historical development process.

The PTT, which has become one of the leading enterprises of the age, draws its strength from its traditional identity as the sole agent of communication.

Since it is about postal service, everything has to be done right every day.

Looking at the practices in the Ottoman Empire can help us understand how successful existing services and strategies are compatible with market requirements and clients.

It will also help maintain our commitment and enthusiasm to quality in all postal and logistics business aspects.