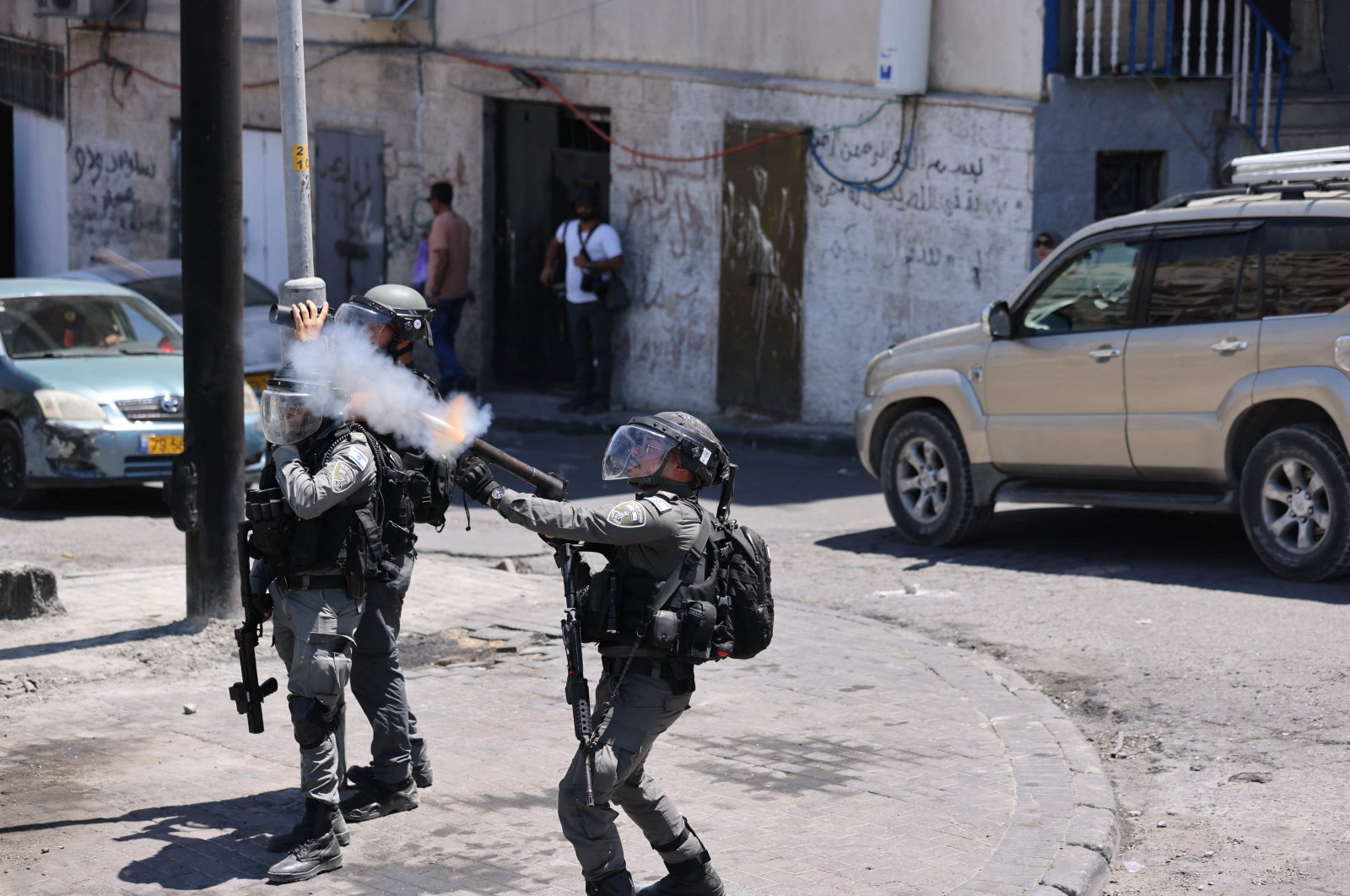 Palestinian residents in Silwan are under great pressure from Israeli settlers. Silwan is a prime example of how Israel gears its policies toward Palestinians and their properties, the keystone to the sweeping, systematic process

On June 29, Israeli forces accompanied by bulldozers entered the Palestinian neighborhood of Silwan in occupied East Jerusalem and destroyed a butcher’s shop. Soldiers used tear gas and batons to push back residents and Palestinian activists as they carried out the demolition.

At least four Palestinians were injured in the confrontations, according to the Palestine Red Crescent.

This issue is not just about one shop as there are 20 other units that are in the same situation in this neighborhood.

What is happening in Silwan?

On June 7, the Jerusalem municipality issued a series of demolition orders to residents of the al-Bustan area in Silwan.

The 13 families affected, consisting of some 130 people, were given 21 days to evacuate and demolish their houses themselves. Failure to do so would mean the municipality would destroy the houses and families would have to cover the demolition costs – an estimated $6,000.

Since 2005, residents of al-Bustan have received warnings to demolish nearly 90 homes under the pretext of building without a permit as Israeli authorities do not provide Palestinians with adequate permits in favor of an Israeli settler organization. Israel also points to its plans to build the “King’s Garden” park on the site and link it to the archaeological so-called City of David area.

Meanwhile, in the neighboring Batan al-Hawa, 86 families are in various stages of eviction proceedings spearheaded by the Israeli settler organization.

Moreover, on Aug. 2 the Israeli Supreme Court is expected to announce whether it will allow the appeal request by four of the total 28 families at risk of eviction from their homes in the East Jerusalem neighborhood of Sheikh Jarrah following court proceedings by a settler organization in Sheikh Jarrah.

This is how it works in occupied East Jerusalem and Israeli law has made it difficult for Palestinian families to appeal for the demolition orders before the courts.

South of the Old City of Jerusalem, Silwan spreads out over around 5,640 dunams of land (approximately 1,393 acres), located within Jerusalem’s municipal boundaries. Silwan is made up of several different neighborhoods, including Ras al-Amud, al-Bustan, Wadi Hilweh, Wadi al-Rababah, Wadi Qaddum, Ain al-Lauzah, Batn al-Hawa, al-Harah al-Wusta, and Wadi Yasul. Silwan grew, in part, with the arrival of Palestinian refugee families following the Nakba, which translates as the "great catastrophe" in 1948 and in the aftermath of the 1967 War. Currently, Silwan’s population consists of about 65,000 Palestinians.

Silwan’s northern boundaries lie merely 300 meters (984 feet) from the southern wall of Al-Aqsa Mosque, at the core of historic Jerusalem, and the neighborhood is home to several archaeological sites and the Silwan spring, the only recognized spring in Jerusalem, located in the Wadi Hilweh neighborhood. Its proximity to the Old City, along with its historical and archaeological significance, has rendered Silwan the main target for Israeli colonization and Judaization.

Israel redrew the municipal boundaries and absorbed Silwan into Jerusalem Municipality in 1967, along with a number of Jerusalem neighborhoods and surrounding villages. Since then, the area has been a frequent target of Israeli aggression, leading to a large number of arrests and detention of residents, mainly Palestinian youth and children.

Silwan serves as a dynamic example of the ongoing oppression of the Palestinian people and the confiscation of their property in occupied East Jerusalem, with almost all Israeli government institutions actively involved in settling and altering the character of Silwan.

In addition to Israel’s discriminatory planning and zoning regime, which creates unbearable living conditions for Palestinians in Jerusalem, Silwan has been the site of aggressive government-supported settlement activities carried out by private Israeli settler organizations. As a result, house demolitions and forced evictions at the hands of the Israeli occupying forces have become routine for Palestinians in Silwan.

In recent years, significant parts of the area of Wadi Hilweh have been wrested away from the local population. Public land and property have been “privatized” without tenders and handed to private organizations from the Israeli ideological right. These organizations act as contractors that receive the protection of government agencies, but they are not held accountable to the public or subject to the legal and administrative restrictions that apply to government bodies.

Since Israel’s illegal annexation of East Jerusalem, three master plans have been drafted for the city by the Israeli occupying authorities, none of which have reached the validation process. Under Israeli planning law, no building permit can be issued without the prior submission of a local planning scheme.

Since large parts of the master plans for Jerusalem are not detailed, Silwan’s residents are responsible for creating their own planning schemes, such as the local outline or detailed plan, which must be submitted for validation before building permits can be issued.

At the same time, the plan’s validation process is extremely long, complex and supervised by the Israeli Interior Ministry, which can freeze the plans at its own discretion. Israel’s official plans designate 35% of the occupied East Jerusalem for the construction of illegal Israeli settlements, while 30% of the land does not have a local planning scheme, and 22% has been zoned as “green areas” in which construction is prohibited, thus leaving a mere 13% (9.18 square kilometers) available for Palestinian construction.

Most of the plans submitted by Palestinian neighborhoods are rejected on the grounds that the requested permits were either for unplanned areas, land zoned as “green areas,” or on the pretext that the area requested for construction has already reached its maximum density. To date, all attempts by Silwan’s residents to validate neighborhood planning schemes in line with Israeli procedures have failed. Besides the complexity and the political nature of the approval process for such local planning schemes, the heavy financial costs incurred as a result of the application process render this option largely unaffordable for residents of Silwan.

With an average poverty rate of 76% in East Jerusalem, engaging in such an expensive process, without any guarantees of obtaining approval for construction, is not feasible for Silwan’s residents.

Israeli policy openly discriminates against the Palestinian residents of Silwan and aims to displace all of them and transfer additional land from Palestinian residents to Israeli control as a part of the “Judaization” of Jerusalem relying on a dubious legal pretext to advance a political agenda.

Israeli authorities in 2019 inaugurated the first section of the excavated so-called tunnel "Path of the Pilgrims" that extends from Wadi Hilweh to the Western Wall, just outside the Al-Aqsa complex, also known to Muslims as Haram al-Sharif in occupied East Jerusalem’s Old City.

Israeli officials – including members of the settler organization Elad that funds the excavations and manages the site –claimed that the route was taken by Jewish pilgrims on the way to the Second Temple, which they believe to have been situated where the Al-Aqsa complex is located while to date, no academic or scientific report has been published on the tunnels, nor has any data been released as to what has been discovered.

Silwan is one of the cases of Israeli policy toward Palestinians and their properties and it is the keystone to the sweeping and systematic process, which aims at gaining control of all the Palestinian territories that surround the Old City, evict the city from its Palestinian citizens and cut it off from the urban fabric of East Jerusalem.