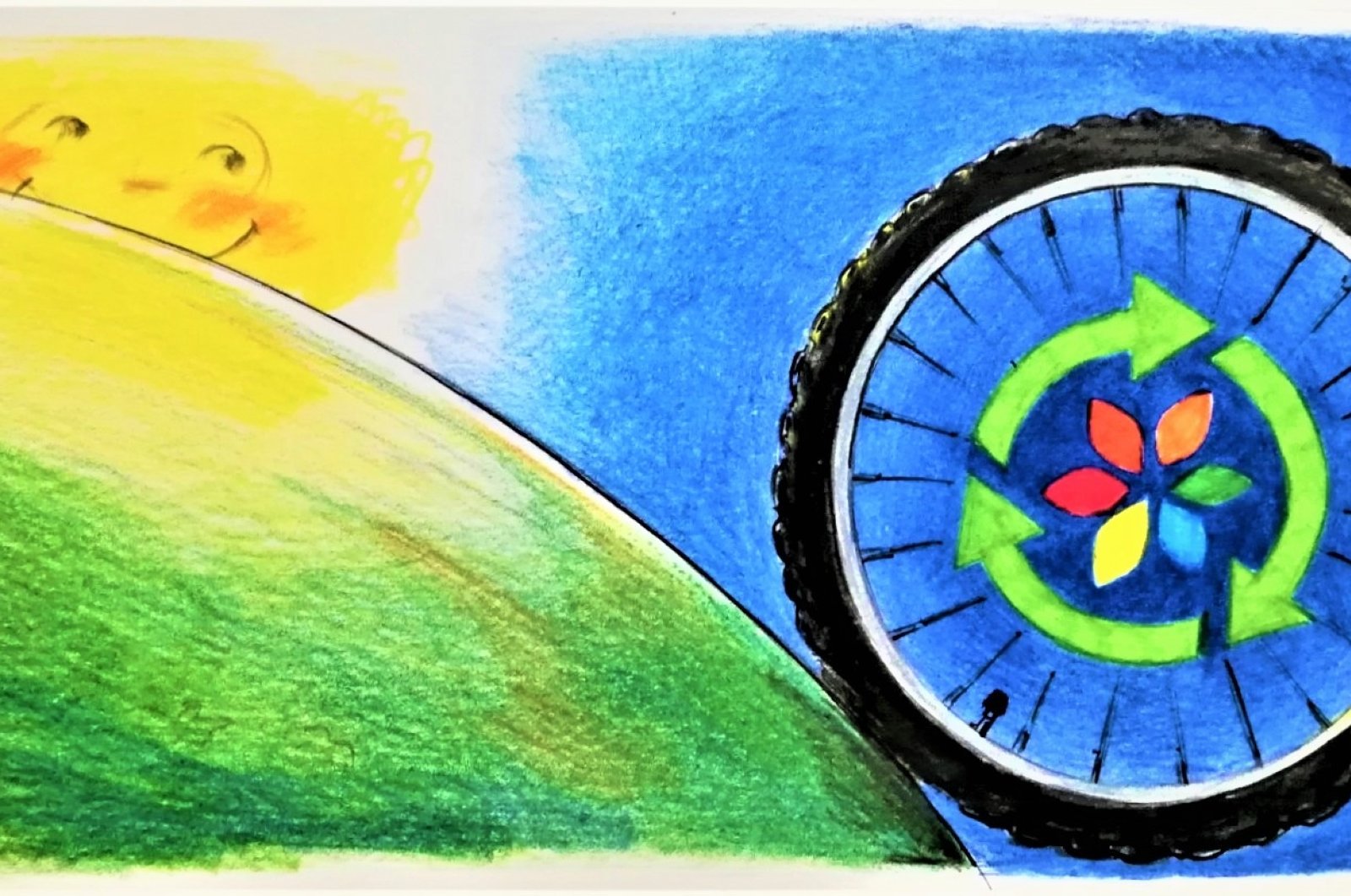 Environmental problems are one of the root causes of today's frequent disasters and pandemics. In this respect, a substantial transformation is happening in the world, whereby a new order is being established: A transformation that centers around the environment.

The world is moving towards the goal of using limited resources more effectively and efficiently, in a circular manner. This transformation is imperative.

The Human Development Report (HDR) of the United Nations Development Program (UNDP), which has been published annually since 1990, states that we have entered a new era – the Human Age. As scientific studies show, currently, the amount of mass produced biomass exceeds naturally-existing biomass.

In Turkey, a similar transformation can be seen. It is still fresh in many minds that, only in 1993, a horrific garbage explosion took the lives of 39 citizens in the country. However, right now, we are observing a transition period to the zero-waste model.

It is an environmental transformation that aims to boost a good deal of investment in the country. The more investment made in the environment, the lower health costs will be.

It can be said that Turkey is acting in line with this fact. Nevertheless, this initially requires a solid legal infrastructure.

The country's Environmental Law No. 2872 of 1983 is almost 40 years old. Although the environment is a highly dynamic issue, Turkish law has remained untouched for many years, except for some minor regulations.

Environmental investments that started in Istanbul in 1994 have been spreading nationwide since 2002. Turkey's environmental law has been subject to comprehensive revision three times, two of which were edited in the last two years, in order to correspond to the needs of the day and to be in harmony with the rest of the world.

The first comprehensive regulation was implemented in 2006. Upon the discovery of barrels containing hazardous chemical waste in the Orhanlı neighborhood of Istanbul's Tuzla district, along with the increase in environmental concerns at the societal level, the regulation, which had been obsolete for years, was passed by the Parliament thanks to great efforts by then Prime Minister Recep Tayyip Erdoğan. The regulation increased environmental penalties as well as inspection activities.

The healthy management of consumption-indexed trends, which have risen due to the rapid developments in the world over the last two decades, has created a need for new measures and more effective steps. In this respect, a comprehensive revision of the environmental law was made for the second time in 2018.

A clear example of this is the Zero Waste Campaign, which was initiated in September 2017 under the auspices of first lady Emine Erdoğan.

As part of this campaign, the recovery target, which is currently at 13%, has been set at 35% for 2023. In order to achieve this goal, the first mandatory deposit policy was defined in law. The financing infrastructure needed an effective waste management policy, hence the implementation of the Recycling Contribution Fee (GEKAP), which also included the paid plastic bag policy.

The participants were also entitled to a GEKAP exemption if they set up their own collection infrastructures and collected their waste using the deposit method.

Thus, it became clear that the main benefit of GEKAP is that waste was separated, processed and put back into the economy rather than going to waste storage areas.

One of the issues addressed within the scope of the regulation is the pricing of plastic carrier bags to combat plastic pollution.

Turkish people showed great favor for this practice which was first implemented in 2019. At the end of the first year, the use of approximately 180,000 tons of plastic was prevented with an 80% reduction rate.

Ecological transitions, which are one of the most important environmentally-friendly practices, have gained legal ground with this regulation as well.

In areas where highways divide wildlife, bridges, culverts and underpasses have been designated to enable ecological crossings. In this way, the regulation can protect wildlife and ensure the passage of wildlife safely.

This means zero-emission and climate/air-friendly energy production systems, such as wind, wave and tidal energy are allowed to be set up on the open seas.

In pursuit of the vision of a liveable environment, the Ministry of Environment and Urbanization has taken one step further in this regard.

The establishment of the Turkish Environment Agency was passed into law via approval from the Parliament on a legislative proposal that included many issues, such as the zero-waste bill and bicycle transportation. It entered into force when it was published in the Official Gazette on Dec. 30, 2020.

This regulation led to an environmental agency being established in the country for the first time. The primary goal of the agency is to manage the Deposit-Refund System (DIS).

The DIS, which is an effective tool widely used across the world for collecting waste, is expected to show an increase in its efficiency due to being a single-body management.

Firstly, a cleaner and greater amount of waste will be collected via the DIS which will be applied to widely-used beverage containers, which exceed 20 billion in number annually.

The system, which is expected to reach 90% recycling within a few years, will prevent the generation of more than 1 million tons of additional waste annually.

Another prominent duty of the agency will be to carry out tasks focused on zero waste. In this respect, studies will be carried out to create social susceptibility and awareness for the protection of the environment, and to spread zero-waste practices. Relevant stakeholders will be supported in these practices.

Another significant point in the law is the increase in bicycle transportation. The law will make the use of alternative, environment-friendly vehicles easier and more common.

The increasing use of electric scooters in Turkish society is now supported by a legal basis. The scooters, which also appeal to children, will be a means of transportation that can also be used in traffic.

Therefore, regarding safety, an age limit of 15 has been set and a maximum speed of 25 kilometers per hour (15.53 miles per hour). In addition, the sale of second-hand scooters, carrying goods while driving as well as having multiple passengers are prohibited.

Moreover, with the regulation in the Highways Traffic Law, bicycle roads will be built by the appropriate highway bodies.

In places where there are bicycle paths, cycling will have priority in right/left turns over motor vehicles.

Revision in the regulation

The law includes various regulations, mainly under three headings, and the last part of it concerns regulations on environmental law. These regulations cover waste management, the management of motor oils, the Environment (Eco) Label and extending the scope of administrative fines.

Just as with other waste groups in the country, only 10% of waste motor oil (which has a crucial economic value) is being recycled.

Accordingly, via the legal regulation, an "authorization certificate" will be given to places that offer engine oil changes. This efficient monitoring will ensure an increase in the collection rate of waste oil, which will be returned to the market and sent for recycling.

Another innovation concerns the Eco Label, the significance of which is soaring worldwide. The Eco Label shows that products and services abide by an environmentally-friendly process throughout, and the label has now gained legal support. The system will make a great contribution to the zero-waste movement, and it is based on voluntary participation.

What are the new penalties?

The scope of administrative fines has been expanded as they are an efficient deterrent in preventing environmental pollution. While there is an overall increase in the number of penalties, such as fines for vessels polluting our seas, some non-conformities are subject to administrative fines for the first time.

Some activities that will receive a fine for the first time include:

I hope that all of these legal regulations will make great contributions to Turkey's collective environmental vision, and will bring prosperity to its future generations.

The results of these regulations in practice lie in our hands. At this point, we all have a duty. 2020 played host to numerous disasters that occupied the world agenda, such as record-breaking temperatures, storms, endless fires, drought and the COVID-19 pandemic.

So, let's say “Hello” to a new year in which we usher in an environmentally-friendly way of living.