Steps to take for a peaceful Kashmir 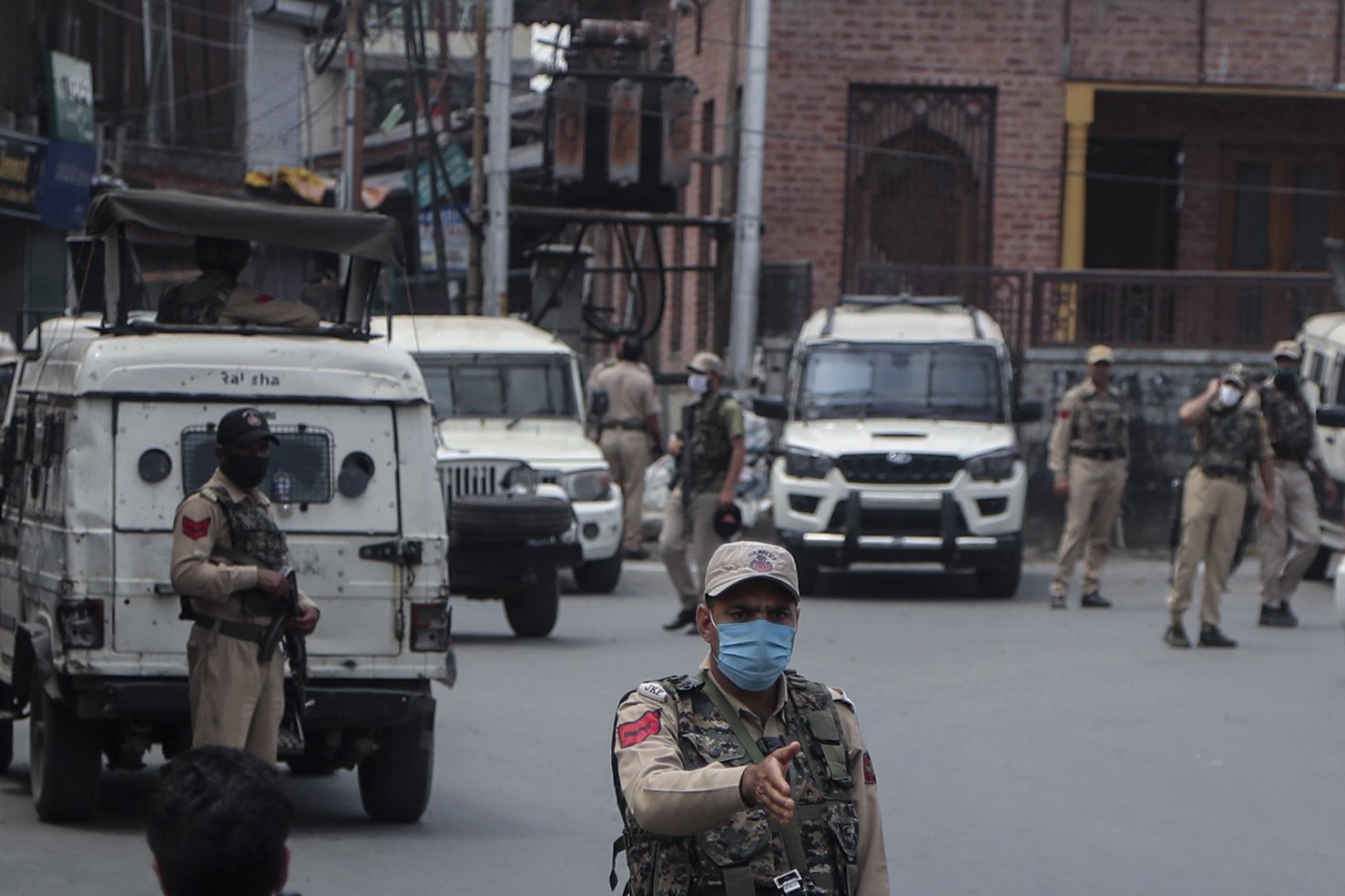 Indian police officers guard a closed market during a strike on the second anniversary of India’s revocation of the disputed region’s semi-autonomy in Srinagar, Indian-controlled Kashmir, Aug. 5, 2021. (AP Photo)
by Ghulam Nabi Fai
Aug 13, 2021 12:05 am

The conflict over the disputed territory of Kashmir is soluble only if a pragmatic, realistic and tangible strategy is established to help set the stage to put the Kashmir issue on the road to a just and durable settlement.

Since we are currently more concerned about setting the stage for settlement rather than the shape the settlement will take, we believe that is it both untimely and harmful to indulge in or encourage controversies about the most desirable solution to the dispute.

Any attempt to do so at this point of time amounts to playing into the hands of those who would prefer to maintain a status quo that is intolerable to the people of Kashmir and also a continuing threat to peace in South Asia. It also succumbs to the wishes of those who would like to give the impression that Kashmir is the most complex issue right now.

We depreciate the raising of quasi-legal or pseudo-legal questions during the preparatory phase of the final settlement of the Kashmir dispute. It only serves to befog the issue and to convey the wrong impression that the dispute is too complicated to be resolved and that India and Pakistan hold equally inflexible positions. Such an impression does great injury to the cause. The United Nations is in a unique position to play a more activist and mediatory role in regard to Kashmir by initiating a peace process. This can take the shape of:

In neither case would the handling of the dispute be a rehash of the old arid and acrimonious debates at the U.N. The United States, by itself or through the U.N., would supply the catalyst that is needed for a settlement.

There are alternative courses of action that can be spelled out and involve a sequence of interactive steps over a period of time. None of them would put the peace process in the straitjacket of rigid adherence to old texts.

But if a solution to the problem will be a graduated process, consisting of incremental measures, the violence in Kashmir needs to be brought to a quick end in order to set the stage for a solution. It is interesting to note that when the Kashmir dispute erupted in 1947-48, the world powers championed the stance that the future status of Kashmir must be determined by the will of the people of the territory and that their wishes must be ascertained under the supervision and control of the U.N.

The U.S. was a principal sponsor of Resolution 47, which was adopted by the Security Council on April 21, 1948, and was based on that unchallenged principle. The basic formula for settlement was incorporated in later resolutions.

Today, the urgent necessities are:

At times, various proposals have been made by different people to set the stage for a settlement of the long-standing conflict of Kashmir. Most of them seem to be absolute non-solutions.

However, regarding solutions, I would rule out one thing and that is not helping: Time. It is not on the side of Kashmiris. Time will never heal the problem. Time has made things worst in Kashmir. Let me mention some of the so-called "solutions" here.

First, the Government of India must rescind the Domicile law, which was enacted in 2020 simply to change the demography of Jammu and Kashmir. Until this is done, the people of Kashmir are on the brink of genocide.

Second, there has to be a cease-fire from all sides that must be followed by negotiations. Negotiations cannot be carried out at a time when parties are trying to kill each other.

Third, there cannot be and should not be any preconditions from any party other than a commitment to non-violence and to negotiations.

Fourth, as James Wolsey, former chief of CIA has correctly noted, both India and Pakistan have lost faith in each other and we all know that it is true that they don’t trust each other. Therefore, the time has come that there must be third-party mediation, facilitation or engagement to make sure that the talks between India and Pakistan remain focused. The third-party facilitator does not need to be the U.N. or U.S., it could be a person of international standing.

Fifth, we do not need to invoke principles because principles will not help launch a peace process. Principles can easily be twisted and lend themselves to various interpretations.

But the following principles that are involved in the Kashmir dispute shall remain a guiding force in any final settlement.

Principle #1: It is the inherent right of the people of the five zones of Jammu and Kashmir to decide their future according to their own will.

Principle #2: It is almost impossible to ascertain the will of the people except in a condition free from coercion, intimidation or pressure from any quarter. The history of the last 73 years testifies to the fact that the bilateral talks between India and Pakistan have always been fruitless. In fact, any attempt to strike a deal between any two parties without the association of the third party will fail to yield a credible settlement.

The arrangement between Jawaharlal Nehru and Sheikh Abdullah, then prime ministers of India and Jammu and Kashmir, in 1952; and the pact between Indira Gandhi and Sheikh Abdullah in 1975 sought to bypass Pakistan, leaving the basic issue of Kashmir unsettled.

Likewise, the Tashkent Agreement of 1966 between India and Pakistan, the Simla Agreement of 1972 and the Lahore Declaration of 1998 sought to bypass the people of Kashmir and resulted in failure.

So, the time has come that talks must be tripartite as the dispute primarily involves three parties: India, Pakistan and the people of Kashmir.

But the primary and principal party are the people of Kashmir because it is ultimately their future, the future of the 23 million people of Jammu and Kashmir, that is to be decided.

We want to emphasize that the Kashmiri people are for democracy. They believe that their leadership and the future disposition of the state must be ascertained through a democratic process.

Kashmiri people will participate in the election if they are part of a process, which would eventually lead to the Kashmiris’ goal of self-determination. The election process must be organized and monitored by the U.N.

The elected representatives should have the mandate to enter into negotiations with India and Pakistan. Impartial and neutral monitors should supervise the whole election process, including the preparation of voter registration. The constitutional requirement for candidates to take an oath of allegiance to the Indian Constitution has to be waived.

These ideas need refinement, but they build on the ineluctable truth that nothing fruitful is possible in Kashmir without the primary participation and willing consent of the Kashmiri people. Schemes and negotiations that neglect that truth are doomed to failure, as proven by 73 years of grim conflict in Kashmir with no end in sight.

Finally, history will testify that the final settlement of the Kashmir conflict undoubtedly brought peace and security not only to Jammu and Kashmir but also to the whole region of South Asia – home to one-fifth of the human race.