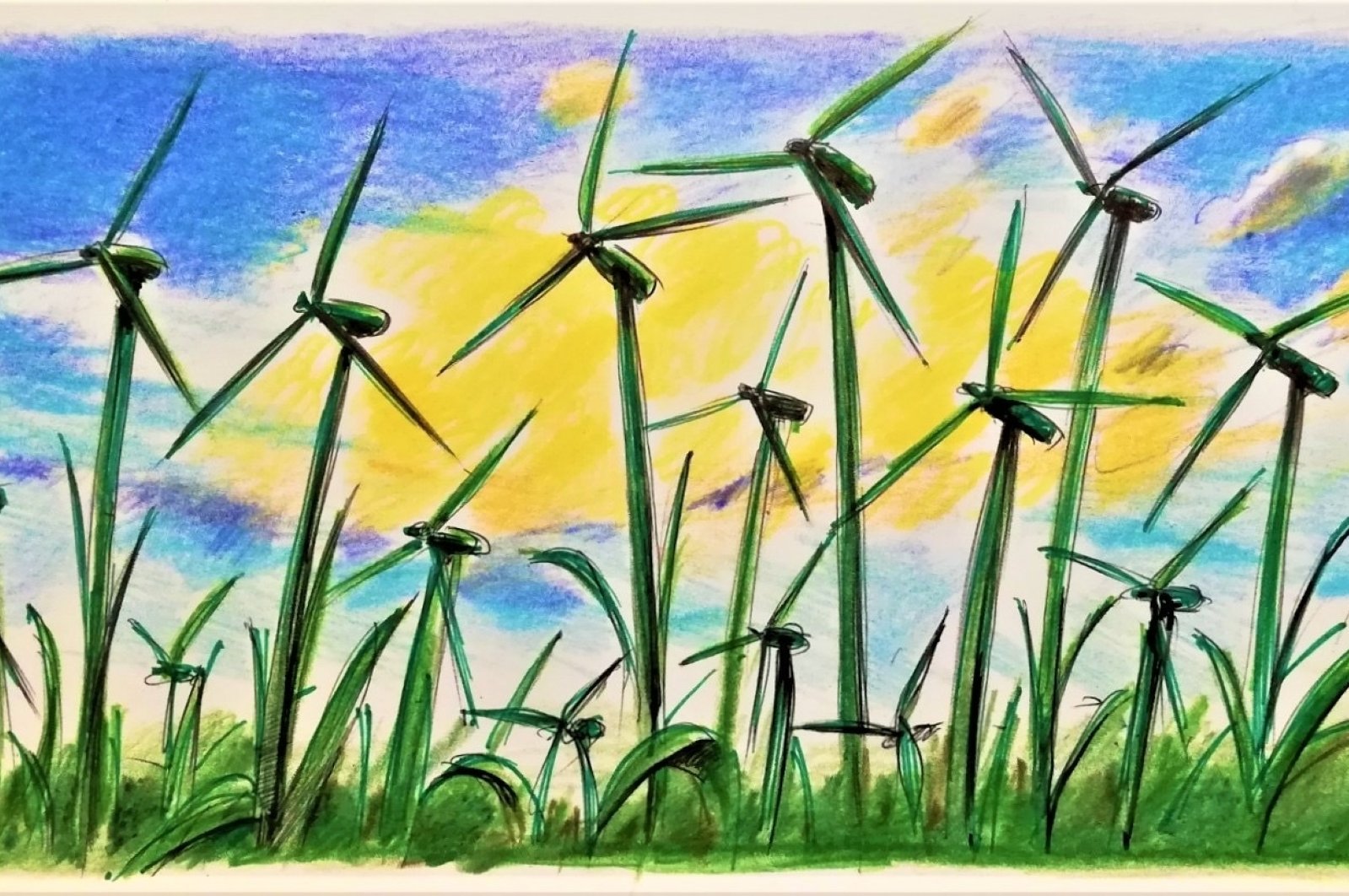 In the aftermath of the two destructive world wars in the last century, the world experienced an era of redevelopment and global prosperity prevailed. It is known as the great acceleration in history.

In the process called the Third Industrial Revolution, automation and information systems entered our lives. Relatedly, the need for energy has multiplied and energy production has become the leading tool of development.

Energy need has increased by 25% on a global basis since the 2000s, which indicates that by 2040 there will be an additional energy need of at least 30%. Such an increase equates to the size of adding another China and India to the world.

Throughout history, humankind has maintained energy production in harmony with nature. Besides renewable resources like water and wind, biofuel consumption for heating and cooking was carried out harmoniously.

However, a comfortable life expectancy brought new habits that increased consumption and accordingly, the destruction of nature.

In particular, the use of energy for heating, lighting, as well as cooling, transportation, communication, health, manufacturing and agricultural irrigation has increased the need for energy day by day.

Such conditions made it necessary to process more fossil resources as the main resource used in energy production. The increased production and consumption not only intensified the pressure on natural resources, but also the emissions released during these processes, which cause air pollution and 7 million deaths every year. Simultaneously, such emissions are conducive to climate change.

Moreover, three centuries of whaling activities for whale oil, which was used prior to fossil resources in energy production, resulted in the major destruction of biodiversity and the marine ecosystem.

The COVID-19 pandemic is a reflection of environmental degradation that currently forces humans to fight against an invisible enemy. The coronavirus has taken the whole world by storm and dictates certain changes in our lifestyles and daily practices.

While the worldwide battle against the pandemic continues, other problems deriving directly from climate change are substantially expanding.

According to data from the World Meteorology Organization, the six warmest years have been recorded since 2015. In addition, 2020 was recorded as the third hottest year after 2016 and 2019.

Climate change increases the number of occurrences of meteorological, climatic and hydrological disasters, and such damage causes loss of life and property.

The energy sector is the biggest source of greenhouse gases that exceed 50 billion tons of carbon dioxide equivalent, which has formed annually with an increase of more than 40% in the last 30 years.

Social changes and developments that have taken place in the world have had the same effects in our country, whereby a comfortable life has become a crucial demand.

The migration from rural to urban spaces has put more pressure on cities and consequently required more investment.

In this respect, great strides have been put into practice in Turkey, which allowed more room for progress.

In addition, Turkey’s native historical, natural and cultural richness has transformed localities into areas of attraction and accelerated life in these regions, which resulted in great increases in production and consumption.

According to data from the Turkish Statistical Institute (TurkStat), since 1990, the population rose from 60 million to a recent 84 million.

- Resource use on a raw material basis increased twofold from 500 million tons to 1.2 billion tons

Although the population only grew by 40%, resource use, energy consumption and waste generation increased more than twofold. This figure shows that individual consumption has exponentially increased as well.

All of these advances and developments require more and more energy every day. In this respect, Turkey has made great progress with the investments made in installed power and has increased it by 4.5 in the last 25 years, exceeding the value of 97,000 MW from around 21,000 MW.

However, Turkey is dependent on foreign energy resources. The overall import rate was around 66% in the 1990s, while it has increased to 70%-75% today.

In addition to the management of ash and slag waste and high cooling water that puts environmental pressure on water resources, the main source of greenhouse gases that accelerates air pollution and the climate crisis has been energy production.

According to the 2018 Greenhouse Gas Emission Inventory of the TurkStat, energy production in the country takes the lead with 71%.

The fact that energy resources are the responsibility of certain countries may occasionally jeopardize the continuity of energy supply. The oil crisis of the 1970s is a great example of this.

Besides, limited resources are another component of the concern over sustainability.

It is estimated that fossil-based energy resources available on a global scale will remain at a sufficient amount for 150 years at most.

It is, therefore, necessary to seek alternative resources as the main energy means such as coal, oil and natural gas are limited, and have deleterious effects on the environment by triggering air pollution and climate change.

Towards the green change

The Paris Agreement stipulated that each country should reduce its emissions within its means and abilities, therefore states were asked to submit their intended national contribution statements (INDC).

In this context, Turkey has shared with the world the target that predicts a decrease of 21% by 2030. It means a reduction of 1.9 billion tons of carbon dioxide equivalent by 2030, which is equivalent to 3.5 times the emission value in 2018.

Turkey’s reduction target within the scope of its INDC means that the country will emit net-zero carbon (carbon neutral) for 3.5 years. As a developing country, Turkey's renewable energy sources are of great importance to achieve this ambitious goal.

In addition, it is crucial to act within the principles of clean production and resource efficiency in order to ensure the efficient use of energy.

Unfortunately, the country could not achieve the desired breakthrough in the industrial and technological revolutions that had a great impact on the global development in history – but now there is another opportunity.

Turkey has great potential for the environment and climate-friendly green revolution as it is located in the Mediterranean basin and surrounded by seas on three sides, a geography that is highly promising for renewable energy resources.

The policies and strategies developed to utilize this potential are centered on alternative renewable resources. Instead of limited and harmful fossil fuel consumption, renewable resources like wind and solar have been prioritized and have become 52% of the country’s energy installed power.

When compared to others

Turkey ranks sixth in the European Union and 13th in the world in terms of renewable energy installed capacity. In energy production from geothermal resources, the country ranks first in Europe and fourth in the world.

In recent years, difficult to manage and costly waste, such as organic-containing domestic and industrial waste and wastewater treatment sludge, has also been used in the field of energy generation from biomass and the installed power in this scope has reached the value of 1.2 GW.

Moreover, these local resources also contribute greatly to energy supply security. In particular, the renewable energy support mechanisms (YEKDEM) system developed in recent years, besides the state-assured purchase guarantee of energy, has also contributed to the use of domestic equipment to strengthen and encourage the domestic manufacturing industry.

In this respect, various resources such as wind, water, biomass, solar and geothermal have been utilized. Again, with the production of energy from waste, it is ensured that natural resources are protected and waste disposal costs are prevented.

In this way, as a result of the collection and utilization of methane gas generated in 90 solid waste landfills, which ensures the healthy disposal of domestic waste, the energy required by 1.5 million houses annually has been produced.

Likewise, efficient use of energy has been enabled via regional heating produced from waste heat. Geothermal resources, which are renewable resources and in which Turkey ranks fourth in terms of installed power in the world, also take the lead.

One of the important regulations the country developed and implemented in 2018 was ensuring that renewable energy generation can also be made offshore.

With this system, which increases both production amount, cost and efficiency and is actively used in countries such as the United Kingdom, Denmark and Canada, the opportunity to benefit from wave energy is also provided. Turkey, which is surrounded by sea on three sides and has a coastline of 8,300 kilometers (5157.38 miles), has a strong potential in this sense.

It is equally valuable to have energy resources as well as to use them effectively and efficiently. Cleaner production activities in the industry are one of the important practices in this respect.

Recycling waste to join the value chain is also one of the more effective and efficient ways to use energy and resources. With the Zero Waste Project implemented in this manner, one-fifth of waste generated is processed instead of being stored and presented as a raw material to the industry.

The Zero Waste campaign is one of the most important steps taken toward protecting resources and preventing emissions. The project, which gained strong momentum thanks to the efforts of first lady Emine Erdoğan, was awarded the U.N. Food and Agricultural Organization (FAO) award in 2018 and the U.N. 2030 Sustainable Development Goals Action award this year.

Within the scope of the project, it is aiming to include at least one-third of the waste generated in 2023 back into the value chain.

Thus, processes such as extraction, processing, storage and transportation of the necessary raw materials will be eliminated, and possible greenhouse gas emissions from these processes will be prevented in the same way.

Renewable energy sources have very low environmental footprints and they are environmentally friendly applications with zero emissions in terms of greenhouse gases.

According to the studies, in the production of 1 terawatt-hour of energy throughout the entire life cycle (the cycle that includes all processes such as extraction, processing, transportation, use, waste management, etc.) the greenhouse gas emission is 5 tons for solar energy, 4 tons for wind energy and 3 tons for nuclear carbon dioxide. While it is calculated as 490 tons for natural gas, 720 tons for oil and 820 tons for coal.

For instance, it is possible to save large amounts of water with wind farms. While power plants that produce with existing fossil resources require a significant amount of water for production and cooling, there is no need to use water in the process of energy generation from sources such as wind and sun.

According to the European Environment Agency (EEA), only the amount of water used for energy production in the EU in 2016 constituted 44% of the total water consumption.

Energy is an integral part of our lives. So much so that when we feel bad, we say that we are low on energy and express the sentiment that energy is practically indispensable to the continuation of life.

Therefore, as a country, Turkey should open the door to a green transformation in domestic and national energy, and it should prioritize clean energy so that its energy does not run out.

Europe, China and Chile have a goal to be carbon neutral. Turkey also has opportunities and capabilities to do so. As long as it uses them in moderation, it can return to its essence and lead an environmentally friendly life. The country can use its resources more effectively and efficiently.

At this point, the whole country has certain responsibilities, from individuals to societies and governments. We all have a responsibility to change. We have that power and energy.