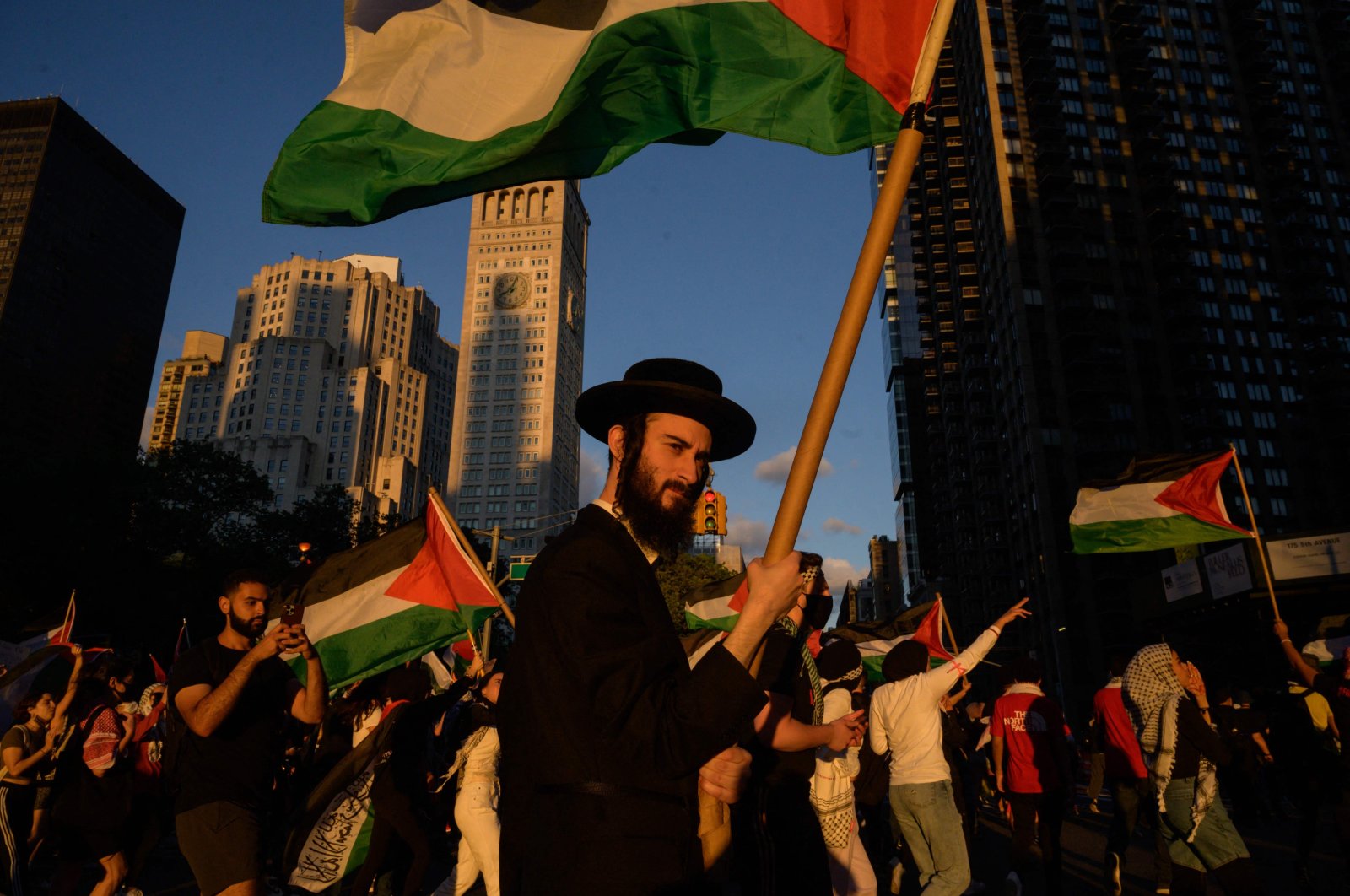 Although pioneering steps are expected from the U.S. in the Israeli-Palestinian conflict, the situation is still critical. Despite all the different opinions, the most reasonable solution is the two-state solution, which has yet to be implemented

United States President Joe Biden's promise to help reconstruction efforts in Gaza following Israeli attacks and statements claiming the creation of a Palestinian state alongside Israel is the "only answer" to the conflict, bringing back to the surface the neglected two-state solution.

"That is the best way to guarantee Israel’s future as a Jewish and democratic state and the best way, of course, to guarantee that the Palestinians have the state that they’re entitled to," said U.S. Secretary of State Antony Blinken.

Palestinians, after 53 years of living under Israeli occupation, have been struggling in a one-state reality where their rights and lands are gradually swallowed by illegal Israeli expansionism year after year.

Israel's annexation plans, which violate international law on lands occupied by Israel in the 1967 Six-Day War, is a deliberate attempt to colonize more land and to prevent the emergence of a genuinely independent, sovereign and contiguous Palestinian state.

Israel is enforcing a regime of supremacy in the entire area between the Jordan River and the Mediterranean Sea, including the West Bank. Although the area has not been formally annexed, the defacto situation is apparent when it comes to the massive resources Israel invests in developing settlements and establishing infrastructure to serve them.

This policy has enabled the establishment of more than 280 settlements and outposts now populated by more than 650,000 Israeli settlers (including East Jerusalem) while according to B’tselem, The Israeli Information Center, more than 2 million decares (nearly 800 square miles) of Palestinian land have been stolen by official and unofficial means.

On the other hand, the West Bank is cut with roads linking the settlements to one another and to Israel’s sovereign territory, west of the Green Line. The area is marked with Israeli industrial zones that have been transforming the geography of the West Bank beyond recognition over the decades.

The settlement enterprise is primarily driven by the annexationist right in order to make any Israeli withdrawal more logistically difficult, politically costly and thus pushing away any kind of territorial compromise.

The two-state solution envisages the peaceful coexistence of both Israel and Palestine and proposes a framework for resolving the Israeli-Palestinian conflict by establishing two states for two peoples: Israel for Israelis, and Palestine for Palestinians.

The idea of a two-state solution – with a sovereign Palestinian state alongside Israel with Jerusalem as their shared capital – has been the cornerstone of decades of international diplomacy aimed at ending the Israeli-Palestinian conflict, but it has never been achieved.

A Middle East peace plan devised by Trump’s adviser and son-in-law Jared Kushner was billed as providing for a two-state solution, but that blueprint envisioned a Palestinian state with only limited sovereignty and Israel maintaining security over that state thus, the plan was rejected by Palestinian leaders.

When Biden felt forced to intervene as a result of the recent conflict in Gaza, he effectively returned to negotiations with the Palestinians, decided to reopen the U.S. Consulate in East Jerusalem and announced $75 million in aid to Gaza to help rebuild the enclave after the recent round of violence.

Biden’s new policy presented toward the region is the U.S. commitment to Israeli interests, while at the same time, it infuses new life into the two-state solution to the conflict.

All these changes coming from Washington caught Israel in a state of political instability as Netanyahu was forced out after his 12-year run as premier by a new fragile coalition government made up of parties from the left and the right.

Under the new government deal, Naftali Bennett, a former head of Israel’s main West Bank settler organization and former defense minister, would become prime minister and hand over the post to Yair Lapid, an opposition leader in the Knesset and former finance minister, in about two years.

Recently, Bennett placed much of the blame for the conflict on the Palestinians. He told Israel's Channel 12 TV station, "The truth must be told: The national struggle between Israel and the Palestinians is not over territory. The Palestinians do not recognize our very existence here, and it would appear that this will be the case for some time."

On the other hand, the left-wing parties in the new government, headed by Meretz, consider the settlements to be a symbol of the Israeli occupation, with all the corruption this engenders.

For many Palestinians, Netanyahu’s removal will just give little more than a recovery from harsh memories as they see little hope for a major change from a new Israeli government. And to many of them, Netanyahu’s replacement of Naftali Bennett as prime minister would be no improvement as Bennett rejects Palestinian statehood and all of the mainstream Israeli parties in the new government, with slight exceptions on the extreme left, share pretty much the same ideology.

Besides, for most Palestinians, the discourse has changed from discussion of possible borders of a putative Palestinian ministate bordering Israel to a broad and open agenda for the pursuit of rights, freedom and justice inside East Jerusalem, the occupied territories and Israel itself, which will be a challenge for the Biden administration to push forward.

The latest round of fighting between Israel and the Palestinians has been a tragic reminder of how deep the gap remains between each side in finding a path to some stable form of peace.

The next few years will be a critical period in the Israeli-Palestinian conflict as facts on the ground, demographics, domestic politics and geopolitical trends all suggest that the continued course of time is eroding some of the basic principles that have defined the contours of the two-state solution for decades.

As far away or impossible right now as it may seem, the two-state solution remains the best possible option available for resolving the Israeli-Palestinian conflict.

The U.S., as the most important international actor, should take the right steps to ignite the process and pursue the suitable conditions and strategy under which it will become possible to achieve.