What is Turkey fighting against at home and abroad? 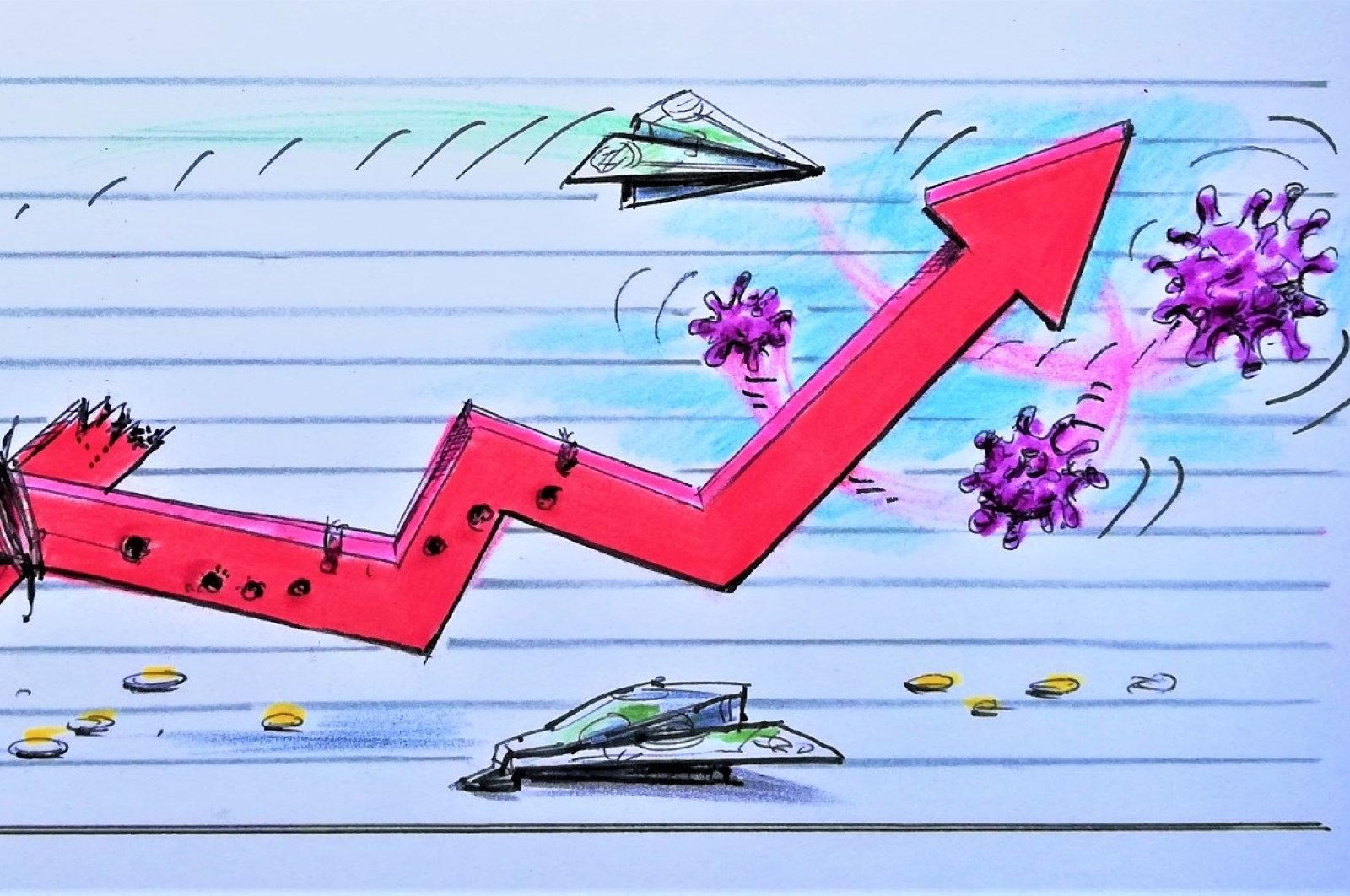 This illustration by Erhan Yalvaç shows a broken-but-progressive graph for the Turkish economy, which was recently targeted by military coups, terrorism and the pandemic.
by Muhammet Ali Güler Jun 10, 2021 12:05 am

Turkey has to contend with more factors than most to maintain its economic and political stability. Coups and political instability at home, and tensions on various issues abroad have posed challenges to the country over the years

Many people in Turkey believe that the country’s economic crises, failure and stagnancy are mainly due to interventions of foreign powers.

It is undeniable that foreign powers have an impact on Turkey's struggle to provide economic and political stability. In particular, the tensions Turkey has experienced with major countries have been on the agenda of the country for years.

As a Turkish researcher, I have classified some of the problems that affected Turkey in the long run and created an extensive list in order to understand the issue as a whole.

Unfortunately, no coalition lasted with the one-party rule between 1950 and 1960. The Justice Party (AP) ruled Turkey between those years, while the Motherland Party (ANAP) stayed in power between 1983 and 1991.

As demonstrated by history, Turkey faced political and economic deadlocks under the rule of these coalition governments. For instance, the Democrat Party (DP), the ANAP and the Nationalist Movement Party (MHP) formed the coalition government that governed Turkey between 1999 and 2002. Toward the end of their rule, Turkey was plagued by political and economic crises, which paved the way for today's ruling Justice and Development Party (AK Party).

In this light, coalitions and military interventions have created a significant polarization in Turkish society. It amplifies the hostility between left- and right-wingers, while bigotry and illiberality discourses occupied daily life.

There is no doubt that the military interventions in Turkish politics somehow played a negative role in political, economic and social developments while favoritism and partisanship prevailed during coalitions.

The only intervention should be the people through elections, although some circles claimed that it was necessary to restore public order across Turkey.

The military’s political intervention in Turkey could be classified as civil disorder, anarchy, political and economic stagnation, reactionary activities, resulting in the constitutions of 1961 and 1980.

Adnan Menderes was a prominent Turkish politician who served as a prime minister of Turkey between 1950 and 1960.

However, his tenure as the prime minister ended after the military coup led by Gen. Cemal Gürsel on May 27, 1960. The coup resulted in the execution of Menderes, Foreign Minister Fatin Rüştü Zorlu and Finance Minister Hasan Polatkan. It also caused the disbandment of the DP on Sept. 29, 1960.

Süleyman Demirel was a prominent political figure in Turkey. He served as the president of Turkey between 1993 and 2000 and as the prime minister for seven terms between 1965 and 1993.

Under Demirel’s leadership, the AP won the general elections on Oct. 12, 1969, with the majority, 46.5%. However, the Turkish military was not satisfied with Demirel’s leadership. Subsequently, the military announced a coup on March 12, 1971, which caused the change of government and Demirel’s resignation.

Demirel was removed from the office on Sept. 12, 1980, by the chief of staff, Gen. Kenan Evren, who remained in office until the elections on Nov. 6, 1983, which were won by the ANAP led by Turgut Özal, who would later become the president of the country.

In 2007, Turkey was in a political impasse regarding discussions on presidential candidates. Some circles did not welcome the candidacy of Abdullah Gül due to his Islamic background. This led the military to declare a memorandum on the military demands from the political ruling party. Subsequently, Gül became the president of Turkey on Aug. 28, 2007.

Turkey and the world were shocked to hear that some military officials attempted to overthrow the government and take control of the country.

The Gülenist Terror Group (FETÖ) was responsible for the military riot. Hundreds of civilians, police and military officers were killed and thousands injured in the attacks led by FETÖ members.

It was the first time that military rebels bombed Parliament. Nevertheless, the top defense officers and commanders did not participate in it and fought against the coup plotters.

The world appreciated the resistance of the Turkish people and the military against the rebels. The successful resistance prevented Turkey from entering another dark era.

In addition to FETÖ, the PKK terrorist organization is another threat to the country. The bloody group here should be considered as a global threat, similar to Daesh.

The PKK has been destabilizing countries in the Middle East for several decades. In an attempt to rebrand itself, PKK-affiliated terrorist groups started to emerge, and their actions have caused grave harm to Turkey. Their threat should be dealt with seriously.

Over the years, thousands were killed by the PKK, while millions were forced to flee their homes. Since the PKK launched its attacks on security forces and civilians in the late 1970s, Turkey has suffered an economic loss estimated to be around $2 trillion (TL 17.17 trillion).

Nevertheless, Turkey has been carrying out efficient and successful operations both within and outside its borders against the PKK for the last several years.

According to reports, there are less than 300 members of the terrorist group left in Turkey, and Turkish citizens believe that Ankara will eliminate all of them soon.

Greece has been pursuing provocative approaches in the Aegean Sea to intimidate and prevent Turkey from achieving its legal rights to conduct activities in line with international rules.

It is not a secret that Greece has militarized some of its coasts and conducted confrontational, aggressive military actions in the air and sea against Turkey. As a result, the two sides have been closed to war over the Aegean Sea several times.

The West has been known to ignore Turkey on matters related to Turkish national interests in the region and beyond. The West has blamed the Turkish side, even in matters pertaining to Turkey’s legal, rightful and humanitarian policies across the globe.

Ankara’s ongoing support for Azerbaijan, Qatar and Libya has received severe criticism from Western powers, and Ankara has been left alone to deal with a massive refugee issue.

The quick Western unilateral remarks on those issues, including the conflict in the Aegean Sea between Turkey and Greece, have not surprised the majority of the public in Turkey.

Undoubtedly, the U.S. is Turkey’s most powerful ally. However, this strong alliance has led to confusion for many people in Turkey who question whether the U.S. is a reliable ally.

The ties between the two allies have witnessed probably the worst periods due to several disputes and conflicts, including the extradition of Fetullah Gülen, the PKK/YPG, S-400s and so on.

A remarkable number of people in Turkey believe that the U.S. is using its asymmetric leverage against Turkey and is behind the current economic deterioration in Turkey.

I would say that the AK Party was the most enthusiastic government in the world when Mohammed Morsi was announced as the winner of the 2012 Egyptian presidential election.

Unsurprisingly, the AK Party had also become that staunch critic of the military coup harshly led by Abdel-Fattah el-Sissi in July 2013 against Morsi, a Muslim Brotherhood member.

The AK Party strongly criticized el-Sissi’s military coup against the freely elected president. This conflict has paused the friendship between Ankara and Cairo for almost a decade but recently Turkey has been trying to restore its ties with Egypt.

In short, these are some of the issues that affected or are still affecting Turkey’s developmental process in all areas. However, we could do much better whenever we fall and stand back. Therefore, before commenting on Turkish affairs, especially on politics and economy, its ties with other countries and the terror issue must be taken into consideration. Otherwise, it would impossible to accurately discuss Turkey.