When US brokers deals, the Middle East faces turmoil 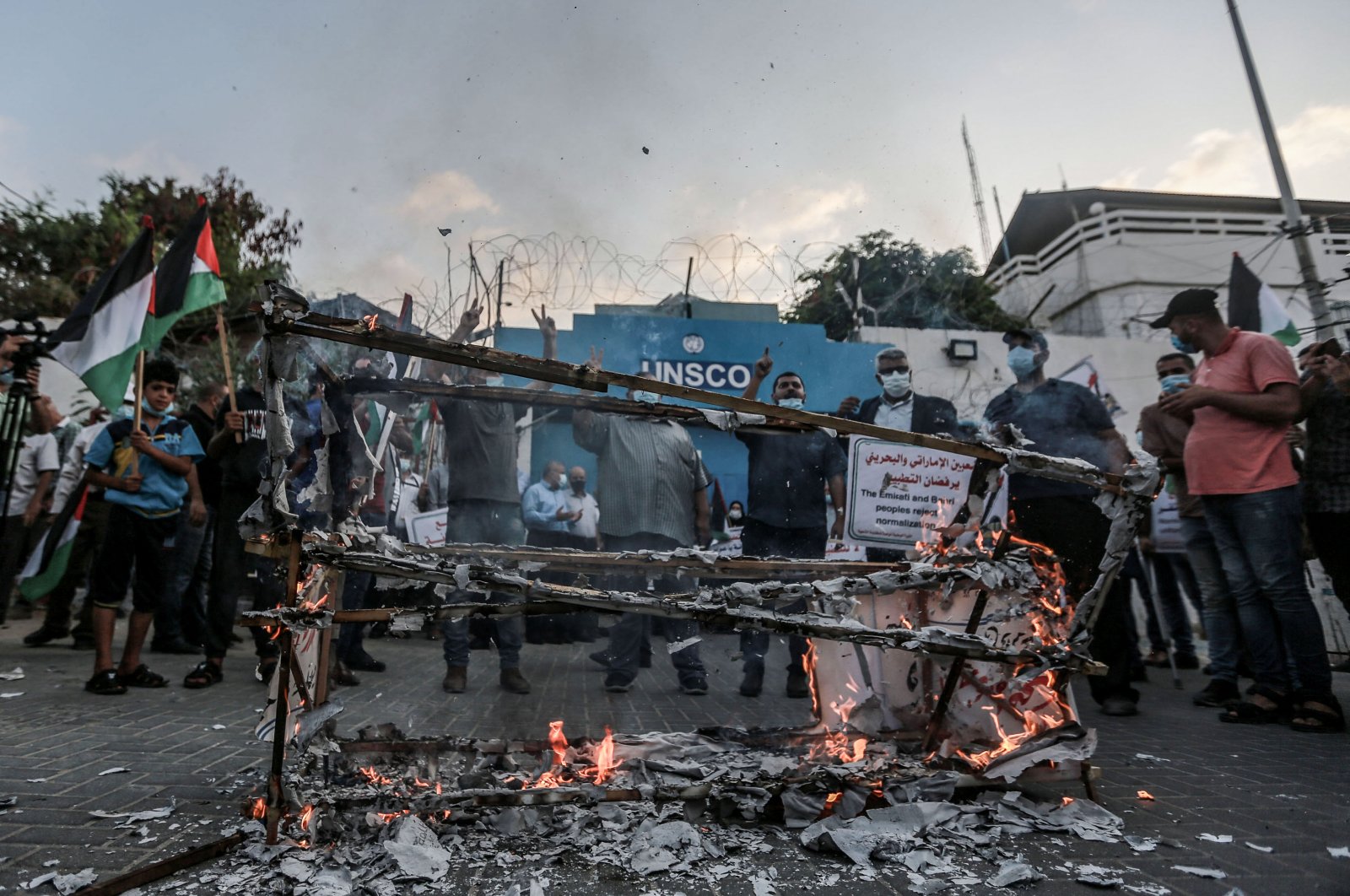 Palestinian demonstrators burn symbolic coffins during a demonstration in front of the office of the United Nations Special Coordinator for the Middle East Peace Process (UNSCO) in Gaza, against the U.S.-brokered Israeli normalization agreements with the United Arab Emirates and Bahrain, hours ahead of the signing ceremony at the White House, Palestine, Sept. 15, 2020. (Photo by Getty Images)
by Syed Tahseen Raza
Apr 02, 2021 12:05 am

Since the Peace of Westphalia, there has been a concerted attempt to establish an order in the chaotic plane of international relations. Stability and order, however, have continued to remain elusive.

More so, it seems that the erstwhile nakedness, in terms of the exhibition of power and untrammeled pursuit of narrow selfish interests by powerful states, in a world unrestrained by any rules, has given way to a very sophisticated and nuanced mannerism toward the pursuit of those very self-seeking goals.

The recent normalization deal between Israel and the United Arab Emirates (UAE), spearheaded by the United States, is a case in point.

America’s hailing the deal as "a huge historic breakthrough for peace in the Middle East" and the UAE’s invocations such as "the deal being done in exchange for the suspension of Israel’s annexation" and Israel's adamance on "delaying the annexation for the time being only on the U.S. president's special request" are nothing but sugarcoated linguistic niceties glossing over long-held sacred principles of a rule-based international order.

The deal broker U.S. has time and again exhibited its partisanship. The biased development, however, used to be camouflaged in the veiled diplomatic language of order and peace. Of late, even the semblance of following the rules has not just been shelved but seems to have been deliberately obliviated.

For example, just after his ascension to the U.S. presidency, Donald Trump announced the illogical recognition of Jerusalem as the capital of Israel and ordered the planning of the relocation of the U.S. Embassy in Israel from Tel Aviv to Jerusalem, unilaterally defying even U.N. decrees.

Later, the U.S. once again exhibited its partisanship quite flagrantly while unraveling "its Middle East Peace Plan," which laid bare the American closeness for Israel in no uncertain terms in front of the whole world.

With such a contextual background in hindsight, for any neutral observer, with even an iota of the basic understanding of international politics, the real intent of any deal brokered by the U.S. would be self-evident.

The timing of the deal though needs to be clarified in terms of the geopolitics of interest of those for whom it is meant.

The choosing of this particular time for inking the deal was mainly to provide the last rudder of hope for the almost sinking ship of the deal broker Trump’s electoral fortune in the last presidential elections. It was also to proffer a much sought-after alibi for the main aggressor Israel to buy time for its illogical and much-criticized extension plan and to extend a face-saving tool to an over-ambitious state UAE to normalize what has already been carried out by it secretly for decades.

However, in the haste of milking the maximum output from the deal, parties to the deal, in fact, revealed their true stripes quite openly.

In the prevailing cacophony of the domineering narrative of the deal, though this critical audit has been unable to capture its true long-term essence, for obvious reasons, its future implications are surely going to be quite perilous for all three actors.

Trump's short-term electoral demands (which resulted in a great failure) or Israeli Prime Minister Benjamin Netanyahu's wish for his domestic constituency or acquisition of tactical weapons for the UAE for it to showoff – which this deal immediately promises to the parties – paled in insignificance to the widening gap. This deal would not lead to solutions for the festering problems of the Middle East.

This has implications for regions far and wide. Former U.S. Secretary of State Mike Pompeo’s controversial Middle East trip during his last days – in which he tried to sell the deal to other smaller nations in the region – is a case in point.

Image matters in international politics and, if one is a "supposed" superpower, each of its moves is very closely watched by other contenders, particularly by the aspiring competitors.

While a lot has been written and discussed regarding the deal since it was announced by Trump after a conversation among the three leaders, a large part of the narrative generally toes the dominant idea marketed by those whom the deal benefits.

Sanitizing the narrative surrounding the deal, from the usual pro-powerful party’s point of view, therefore, becomes an urgent necessity. For this, it is imperative to see the responses of the Palestinians with respect to the deal – because the Palestinian issue is the main fulcrum lying at the root of the Middle East conundrum.

Any deal or probable solution intended for the region without foregrounding this basic Middle Eastern reality will be doomed to fail in the long run.

Any attempt to marginalize or bypass the Palestinian question will not only be a failure but will be dangerously catastrophic with its problematic implications for the regions in the immediate vicinity.

As one keen observer who had the experience of being an ambassador in the region presciently pointed out, “He (Trump) has precipitated a catastrophic miscarriage with fatal consequences ... Trump lacks the erudition to comprehend the impact of what he has triggered.”

This deal basically is a part of Israel's "outside-in" strategy aimed to annihilate the Palestinian cause by luring other Arab nations to its side. Harking on the backing of Palestinians’ internal differences, the Arab states would then be used to pressure the Palestinians to accept Israel’s terms.

However, despite their bitter internal differences, the Palestinians have been unanimous in their criticism of the deal, denouncing it as yet another "a stab in their back" not merely just a "selfish betrayal" – a series of which they had been witnessing since the time their cruel trial began in the aftermath of Allied victory in World War II.

Though the deal's timing came as a bit surprising to the Palestinians, they had an inkling of this coming sometime sooner than later.

Mustafa Barghouti, the secretary-general of the Palestinian National Initiative (PNI) and a member of the Palestinian Authority’s (PA) parliament, said: "We have been seeing strange moves by the UAE, such as sending direct flights to Israel and there were leaks of secret accords between the two in terms of scientific and economic cooperation. It is clear these were preliminary steps to absorb ... shock ... We were never surprised that much.”

Munib al-Masri, a former PA minister, echoed the sentiment of many Palestinians when he stated that, "I never imagined that in my lifetime I would see the day in which the UAE would simply sell the Palestinians out for the sake of normalization ... It's very shameful.”

On the UAE’s touting the deal as an exchange for halting the Israeli annexation, Ahmed Majdalani, the secretary-general of the Palestinian Popular Struggle Front (PPSF) and a senior member of the Palestine Liberation Organization (PLO) Executive Committee, said, "The UAE is trying to deceive and mislead the public by repackaging this shameful agreement as a service to the Palestinians and claiming that it halts annexation, but that’s merely throwing dust in the eyes."

Such is the response of people for whom the deal has allegedly been mediated, terming it as a "historical peace agreement."

The tragedy of the current times, with its hyper-advanced media glare, is that, instead of providing somewhat equitable space in the cacophony of competing claims, it allows more primacy to those with "means," to hegemonically promote their version of events, things and ideas.

This reality can very clearly be discerned in the Israel-Palestine issue and the dominant optics associated with it.

That is the reason, regarding the deal in the discussion here too, we generally get to see the usual response of the world in diametrically contrasting terms as compared to the views of the Palestinians, for whose ultimate benefit this deal is claimed to have been finalized.

This is evidenced by the Palestinian response to the deal depicted above.

Whereas the clear winner of this deal – if there are any – are three persons in order namely, Netanyahu, Trump and UAE's Crown Prince Mohammed bin Zayed (MBZ), the losers are their respective countries, the wider region and in some respect, the whole world.

Also on the losing side is the principle of justice, the idea of hope of a more stable and secure region, and the quest for a meaningfully peaceful solution to the Middle East challenge.

If we apply a simple geostrategic and geopolitical lens to gauge this deal in a historical perspective, carefully dispelling the plethora of deliberately peddled opinion pieces and statements of those considered high and mighty, to look into the crux of the deal, we won't need to look much deeper to reach the conclusion. If this deal represents anything in the historical sense, it depicts the losing grip of the U.S. in the Middle Eastern region.

The streets of the Arab world seethe in anger at the sight of the continuous downward spiral of their region. The Arab youth can no longer be fooled with the likes of modern-day British Lawrences. An increasing proportion of the Arab populace now knows the main reason why the Arab Spring went astray and ended up consolidating the powerful autocrats of the region.

With the oil politics entering into new dynamics because of the changing geo-economics spurred by the pandemic, the citizenry of the Arab world is now aware of the consequences of allowing their fate to be decided by others.

The everydayness of chaos in Iraq, the turmoil in Libya, the mayhem in Egypt, etc. don’t go unnoticed by the Arab populace.

That is why, on many of the Arab streets and not just Palestine, citizens are protesting in no unequivocal terms, at times crushing with their feet the images of not just Netanyahu and Trump but their own leaders too, amid thundering shouts of "betrayal," "backstabbing" and "enough is enough."

What the deal portends

In regard to the geopolitical impact of the deal, the Palestinian cause may be further marginalized as the UAE’s moves have further emboldened Israel to up its ante by drastically lowering its incentive in any negotiation related to the Palestinian question.

However, a much more emboldened Israel, with its hubristic onward march, may not go over well during Joe Biden's term in the U.S., which being mindful of the progressively growing Chinese might and other increasingly altered geopolitical changes in the region, would find Israel’s obstinacy to be too much.

Moreover, an increasingly assertive Turkey and sanction-hardened Iran will continue propping up the spirit of resistance and highlight Israel’s intransigence.

With the hoax of Israel ending its annexation plan obvious, the UAE’s and other such double standards of Arab monarchs will be exposed, and thus to maintain their existence the other Arab monarch will be increasingly bound to once again lean on their Arab identity.

Nuclear power and an assertive Israel with the full backing of the U.S. and its increasingly mounting intransigence obviously is not in the interest of all those with their own regional power ambitions.